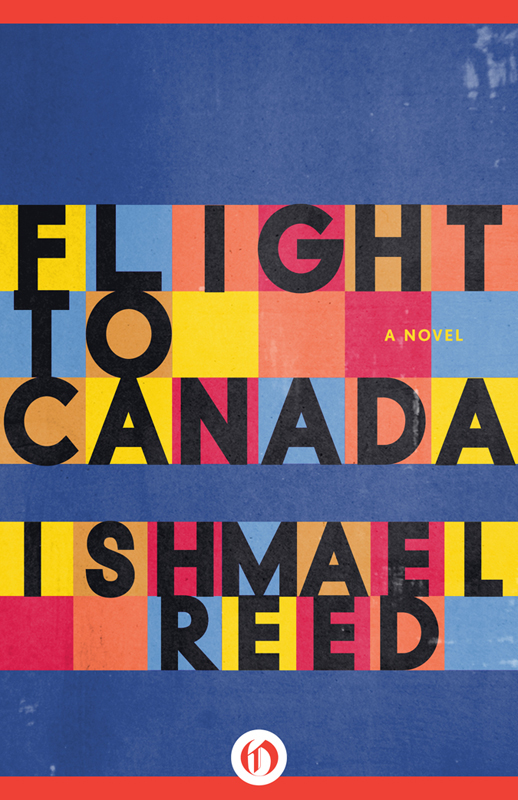 The Saga of the Third World Belle

PART III The Burning of Richmond

A Biography of Ishmael Reed

I have done my Liza Leap

& am safe in the arms

Ain’t no use your Slave

Catchers waitin on me

I won’t be there

I flew in non-stop

Jumbo jet this
A.M.
Had

Compliments of the Cap’n

Who announced that a

Runaway Negro was on the

And shook my hand

Signed up for 3 anti-slavery

Lectures. Remind me to get an

Beats craning your neck after

The North Star and hiding in

Besides, your Negro dogs

By now I s’pose that

You that I have snuck back to

Since I left the first time

Last visit I slept in

Your bed and sampled your

Cellar. Had your prime

You was away at a

In Charleston & so I knowed

Did you have a nice trip, Massa?

I borrowed your cotton money

to pay for my ticket & to get

Me started in this place called

It’s cold up here but least

Nobody is collaring hobbling gagging

Gived me the combination

To your safe, don’t blame

I told her you needed some

More money to shop with &

You sent me from Charleston

To get it. Don’t worry

Down payment on my back

I must close now

Massa, by the time you gets

This letter old Sam will have

Probably took you to the

That was rat poison I left

In your Old Crow

L
ITTLE DID I KNOW
when I wrote the poem “Flight to Canada” that there were so many secrets locked inside its world. It was more of a reading than a writing. Everything it said seems to have caught up with me. Other things are running away. The black in my hair is running away. The bad spirits who were in me left a long time ago. The devil who was catching up with me is slipping behind and losing ground. What a war it was!

Lincoln. Harriet Beecher Stowe. Douglass. Jeff Davis and Lee. Me, 40s, and Stray Leechfield. Robin and Judy. Princess Quaw Quaw Tralaralara. Mammy Barracuda. Cato the Graffado.
*
Yankee Jack. Pompey. Bangalang. It affected us all one way or the other.

“So you’re the little woman who started the big war,” Lincoln was supposed to have said. Received Harriet Beecher Stowe in the White House, only to have her repay his courtesy by spreading the rumor that he was illiterate. They were always spreading rumors about Lincoln. That he and his son Todd were drunks. That Mrs. Lincoln was mad. That he was a womanizer. That his mother Nancy Hanks was a slut. The Confederates said that he was a “nigger.” Who is to say what is fact and what is fiction?

Old Harriet. Naughty Harriet. Accusing Lord Byron of pornography. She couldn’t take to Lincoln. She liked Nobility. Curious. The woman who was credited with ruining the Planters was a toady to Nobility, just as they were. Strange, history. Complicated, too. It will always be a mystery, history. New disclosures are as bizarre as the most bizarre fantasy.

Harriet caught some of it. She popularized the American novel and introduced it to Europe.
Uncle Tom’s Cabin.
Writing is strange, though. That story caught up with her. The story she “borrowed” from Josiah Henson. Harriet only wanted enough money to buy a silk dress. The paper mills ground day and night. She’d read Josiah Henson’s book. That Harriet was alert
The Life of Josiah Henson, Formerly a Slave.
Seventy-seven pages long. It was short, but it was his. It was all he had. His story. A man’s story is his gris-gris, you know. Taking his story is like taking his gris-gris. The thing that is himself. It’s like robbing a man of his Etheric Double. People pine away. It baffles the doctors the way some people pine away for no reason. For no reason? Somebody has made off with their Etheric Double, has crept into the hideout of themselves and taken all they found there. Human hosts walk the streets of the cities, their eyes hollow, the spirit gone out of them. Somebody has taken their story.

Josiah Henson went away and fell in love with wood. Nobody could take his wood. His walnut boards. He took his walnut boards to England and exhibited them at the Crystal Palace. Met the young Queen Victoria.

Nobody could take away his Dawn, his settlement in Canada.

Harriet gave Josiah credit in her
The Key to Uncle Tom’s Cabin.
What was the key to her Cabin? Strange woman, that Harriet. Josiah would never have thought of waging a plot-toting suit against her. Couldn’t afford one anyway. Besides, he was bad at figures. His Dawn went broke because he was trusting and bad at figures. It’s unfortunate when a man’s Dawn goes broke, leaving him hopeless and frustrated. When I see those two men in
The New York Times
in a booth in a fancy restaurant
—
two bulb-faced jaded men, sitting there, rich as Creole Candy, discussing the money they’re going to make from the musical version of
Uncle Tom’s Cabin,
and they have those appetizers in front of them and three kinds of wine
—
when I see that, and when I see their agent in
National Era
swimming in the ocean with his chow dog, I wonder why won’t the spirits go out to Long Island and touch him. Touch him for what he did to Josiah Henson. Touch him like they touched Harriet.

Harriet paid. Oh yes, Harriet paid. When you take a man’s story, a story that doesn’t belong to you, that story will get you. Harriet made enough money on someone else’s plot to buy thousands of silk dresses and a beautiful home, “One of those spacious frame mansions of bland and hospitable mien which the New England joiners knew so well how to build.” A Virginia plantation in New England.

Henson had to sell Dawn, his settlement, to pay his creditors. Is there no sympathy in Nature? Dawn, that’s a pretty name. Are people lost because the gods have deserted when they said they never would? They promised they never would. Are they concealing themselves to spite the mean-minded, who are too unimaginative to recognize the new forms they’ve given themselves? Are they rebuking us for our stupidity? They are mean and demanding. They want to be fed. But before you can feed you have to recognize. They told Josiah Henson to behave with “gentlemanly dignity.” But the common people knew. Guede knew. Guede is here. Guede is in New Orleans. Guede got people to write parodies and minstrel shows about Harriet. How she made all that money. Black money. That’s what they called it. The money stained her hands.

When Lord Byron came out of the grave to get her, the cartoon showed Harriet leaving her dirty stains all over Byron’s immaculate and idealized white statue. Did Josiah Henson do this? The man so identified with Uncle Tom that his home in Dresden, Canada, is called Uncle Tom’s Museum? Did Tom have the power the Brazilians say he has? Does he know “roots”? Umbanda.
Pretos Velhos, Pai Tomas, Pai Tomas.
The “curer.” Did Tom make Byron’s ghost rise out of his undead burial place of Romance and strangle Harriet’s reputation, so that one biographer entitled a chapter dealing with the scandal “Catastrophe”? Do the old African and Indian gods walk the land as the old one said they would, too proud to reveal themselves to the mean-minded? The mean-minded who won’t pay attention. Too hard-headed and mean-minded to see. Harriet’s HooDoo book. “I was an instrument of the Lord.” HooDoo writing.

Do the lords still talk? Do the lords still walk? Are they writing this book? Will they go out to Long Island and touch these men who were musing in the restaurant about the money they were going to make on the musical comedy
Uncle Tom’s Cabin?
Will they get the old mummy grip?

Harriet said that Byron was fucking his sister. She said that she’d gotten it from her friend Lady Byron, who she felt had been slandered by Countess Guiccioli, Byron’s last mistress and the tramp of the Tuilleries Gardens. Harriet accused Byron and his half-sister Augusta Leigh of sharing lustful embrace. Is that why Harriet, the spinster, referred to Lord Byron as a “brilliant seductive genius”? Watch what you put down on the page, Harriet. Did Harriet want to trade places with Augusta Leigh and transform Byron into her brother, Henry? History sure is complicated, or can you, like Stray Leechfield, cash your way out of history?

Why isn’t Edgar Allan Poe recognized as the principal biographer of that strange war? Fiction, you say? Where does fact begin and fiction leave off? Why does the perfectly rational, in its own time, often sound like mumbo-jumbo? Where did it leave off for Poe, prophet of a civilization buried alive, where, according to witnesses, people were often whipped for no reason. No reason? Will we ever know, since there are so few traces left of the civilization the planters called “the fairest civilization the sun ever shown upon,” and the slaves called “Satan’s Kingdom.” Poe got it all down. Poe says more in a few stories than all of the volumes by historians. Volumes about that war. The Civil War. The Spirit War. Douglass, Tubman and Bibb all believing in omens, consulting conjure and carrying unseen amulets on their persons. Lincoln, the American Christ, who died on Good Friday. Harriet saying that God wrote
Uncle Tom’s Cabin.
Which God? Some gods will mount any horse. Even the spinster schoolteacher crawling like an animal from the sightseeing bus toward an Umbanda temple with no a priori beliefs, as they say.

He has just consumed a good old Southern meal of plum pudding, wild duck, oyster soup and Madeira wine, the kind of meal Kentucky generals used to sup at Jeff Davis’ “white house” in Montgomery before the South was reduced to corn bread and molasses. All of the boarders had left the Castle for the weekend. All fifty of them. Craftsmen from all over the South: blacksmiths, teachers, sculptors, writers. Uncle Robin had become exultant when Quickskill first made the suggestion. He hadn’t been able to figure his way out of his inheritance.