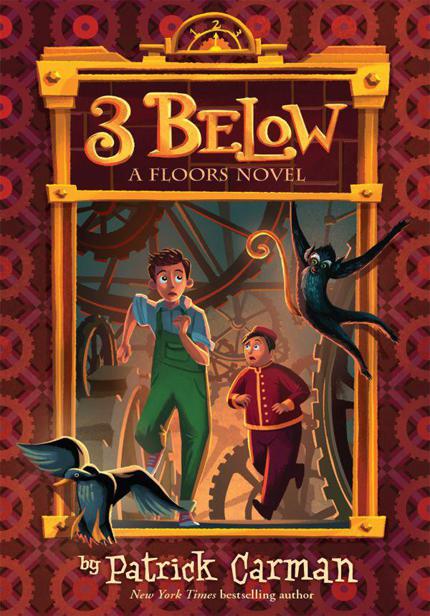 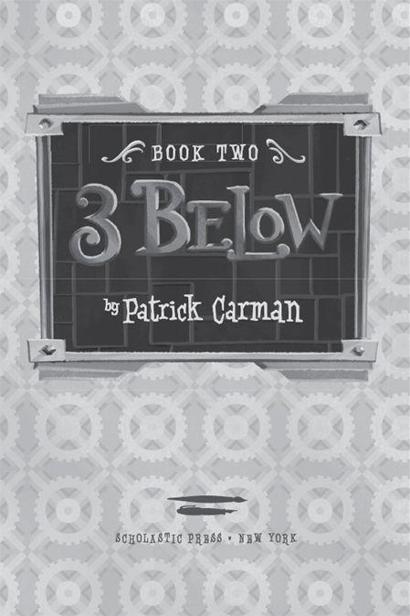 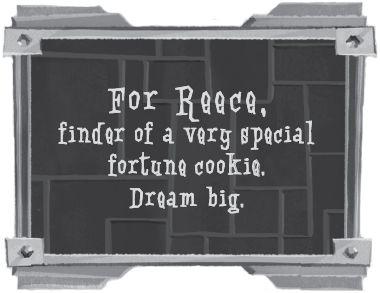 Chapter 1: A Wedding at the Whippet

Chapter 2: Four Floogers, a Zip Rope, and the Iron Box!

Chapter 4: Trouble Brewing Up Above

Chapter 10: The Door of Warnings

Chapter 11: Into the Realm of Gears

Four blocks over and twenty-one blocks down from the Whippet Hotel, there was a crumbling neighborhood of mostly empty buildings. Somewhere in that neighborhood, at the end of its darkest alley, a man stood before a grim door. He’d walked down six concrete steps to arrive at the door, where he stood, unsure of what he should do next. His elbow had caught the edge of a spiderweb on his way down, and he nervously brushed it away.

Twice already he had raised his hand to knock, only to pull it back and consider his options. He could return to his basement cubicle at the New York tax office, where the ceilings were lit with awful yellow buzzing lights and his cell phone wouldn’t work. All day long he stared into a computer screen looking for mistakes on forms. It was a thankless, depressing job, for which he was paid only enough to afford a one-room
apartment in the very neighborhood where the grim door stood.

His name was Mr. Carp, and he hated his day job. It ran the risk of turning him bitter like the burnt coffee they served in the basement.

Any casual observer would see how Mr. Carp’s whole awful existence appeared to well up inside him — his mangy cat, Claudius; his threadbare couch; a total lack of interesting hobbies; basic cable.

He was a man, it seemed, with nothing much to lose. And so, against his better judgment, he knocked on the forbidding door.

He instantly turned to leave, as if he knew it was a mistake. When his foot touched the last concrete stair and he was about to make his escape into the dismal gloom of the alley, the door opened.

“Mr. Carp, what a pleasant surprise.”

It was a sharp voice, filled with the kind of power that stopped sad, desperate men in their tracks. Carp looked back and tried to be polite.

“The one and only,” she answered, tapping the edge of the door with her long fingernails. She eyed the attaché case under Mr. Carp’s arm and smiled wickedly. “Come in, then, come in. I’ve just put on the tea. We’ll have a nice long chat, us two.”

Ms. Sparks leaned out the door as Mr. Carp came back and stood beneath the shadow of her large beehive hairdo.

“I have some business to discuss,” Mr. Carp said, anxiously straightening his wire-rimmed glasses as he stared up into Ms. Sparks’s narrow eyes. He had a thick, tangled-looking mustache, which he ran his hand over nervously.

Although Ms. Sparks did not seem impressed, that was all part of her act. She knew this was a visitor of some importance, for Mr. Carp had the power to turn the fate of the Whippet Hotel in a different direction.

The grim door shut and a secret conversation was had. 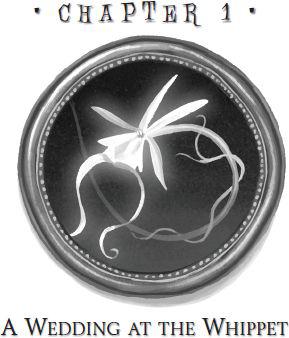 T
here is no better place on earth for a wedding than the roof of the Whippet Hotel. At least that’s what Leo Fillmore thought as he watched six yellow ducklings waddle down the grassy path toward him. They had rings of delicate white flowers from Mr. Phipps’s garden tied around their necks. Now and then, the ducklings would turn clumsily with the idea of eating the flowers, but looming overhead they saw Betty, their mother, staring down at them. Any ideas about eating flowers before they reached the pond quickly vanished.

A mariachi band strummed three guitars in perfect unison as a robot the size of a coffee cup arrived at the top of the grass pathway.

“Here comes Blop,” Leo’s best friend in the whole world, Remi, said, straightening his tie nervously. “I hope he can stay quiet long enough to get down here.” Remi had a round face and brown skin like his mother.

“Stop worrying,” Leo said, patting Remi on the back. “Blop knows better. He’s got this.”

“I wouldn’t be so sure,” Remi said, and he might have been right to worry. Blop was a terrible chatterbox.

Both Leo and Remi were anxious as Blop weaved back and forth toward them with bubbles rising out of his metal belly button. As the bubbles climbed into the air, they popped, freeing glitter that fell like sparkling snowflakes over the gathering of people.

“Nifty trick.” Remi smiled. “I was afraid he was going to burp the ABCs.”

Blop whirled all the way down to the edge of the pond and aimed his head like a cannon over the water.

“Time for his big finale,” said Remi. “I hope it doesn’t backfire.”

A circle opened on Blop’s round head and there was the sound of swooshing air as small daisy petals shot up and showered down over the pond.

“Amazing how many of those will fit inside such a small space,” Remi observed, but mostly he was glad the whole thing had gone off without a hitch as Blop zigzagged back to where the boys stood.

Leo smiled and gazed over the pond, where the ducklings were chasing one another around glowing lanterns floating on the water. When the petals started to land all around them, they were at once confused and elated. They were too young to realize that petals did not normally fall from the sky, so they simply did what ducks do: They gladly gobbled up whatever fell their way.

Leo, too, looked up into the night sky, thinking how strange it was that at age eleven he owned this remarkable hotel. It was a lot of responsibility, but he’d done a fine job keeping it running during his first year on the job. All around him were tall buildings full of light, encircling the Whippet Hotel like centurions. He searched for Merganzer D. Whippet, the man who had built and formerly owned the hotel, wondering if he would appear.

Meanwhile, Blop whirled to a stop next to Remi. “That was harder than it looked,” said the robot, staring up at the two boys as the last of the bubbles drifted up and away. And then, “Not much of a view from way down here. Just a lot of shoes and —”

“Shhhh,” Remi scolded, picking up Blop and placing him gently into his jacket pocket. When Remi looked up again, Leo’s dad was coming down the path. Clarence Fillmore might be the head maintenance man at the
Whippet Hotel, but tonight he looked like a movie star at the Academy Awards.

“Mr. Fillmore cleans up better than I expected,” said Mr. Phipps, the gardener, leaning down and whispering to the boys.

“He’ll be back in his overalls by morning, you can bet on it,” Leo joked, but he had to admit, his dad did look like a million bucks: clean shaven, hair in perfect order, dapper in a tuxedo and shiny black shoes. He arrived next to the boys, smiled at them both, and took up his position next to a remarkable sculpted green bush, one of Mr. Phipps’s masterpieces: two green doves standing three feet high, filled with dots of light, and between them, a silver plate holding two rings.

But the Whippet gardener (and, on this night, its justice of the peace) ignored the compliment. His attention was riveted elsewhere, and as Clarence Fillmore followed the gardener’s gaze, he understood why.

It would be said for years after by everyone in attendance that Mr. Fillmore and the doves and the floating lanterns, the bubbles and ducklings and flower petals, the quiet buildings towering overhead on every side, and all the rest — it
all
paled in comparison to the person who arrived alone at the top of the grassy path just then.
There came a hush over the proceedings. The guitars stopped playing and even the ducklings stopped swimming on the slick surface of the water.

The bride had arrived on the scene.

“Wow,” Blop said from Remi’s pocket, but that was all he could manage. Even for the most talkative robot Mr. Whippet had ever constructed, Remi’s mom was unexplainably beautiful.

Mr. Phipps finally cleared his throat in the direction of the band and they stirred awake. “Here Comes the Bride” played on three guitars as she began to walk. Leo felt his dad trembling beside him.

Pilar smiled nervously as she came down the path. The train of her dress was long and white, and her smile was contagious.

When she arrived next to Leo’s dad, she unexpectedly leaned down to Leo’s level and looked into his eyes.

“We have something for you, will that be all right?”

She had a Mexican accent — soft around the edges — that had always enchanted Leo, so it was possible Pilar could have said “I need to kick you as hard as I can right now, will that be all right?” and Leo would have nodded just the same. Pilar glanced up at Mr. Fillmore for one last sign of reassurance, and he nodded
knowingly. The two of them had talked about what was about to happen, and they had agreed it was the right thing to do.

Mutual Consent by Gayle Buck
Investments by Walter Jon Williams
When Honey Got Married by Kimberly Lang, Anna Cleary, Kelly Hunter, Ally Blake
Of Witches and Wind by Shelby Bach
The Witch of the Western Gate: Dragon's Gift by Brent, P. K.
Agaat by Marlene van Niekerk
It's A Wonderfully Sexy Life by Hope Tarr
Curses! by J. A. Kazimer
The Northern Crusades by Eric Christiansen
Cinderella and the Playboy / The Texan's Happily-Ever-After by Lois Faye Dyer
Our partner