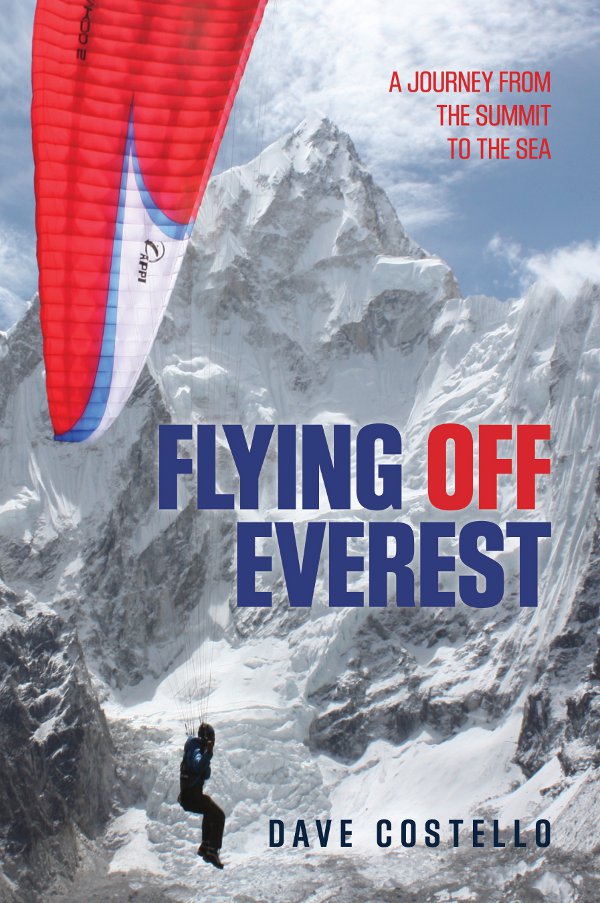 A Journey from the Summit to the Sea

ALL RIGHTS RESERVED. No part of this book may be reproduced or transmitted in any form by any means, electronic or mechanical, including photocopying and recording, or by any information storage and retrieval system, except as may be expressly permitted in writing from the publisher. Requests for permission should be addressed to Globe Pequot Press, Attn: Rights and Permissions Department, PO Box 480, Guilford, CT 06437.

Lyons Press is an imprint of Globe Pequot Press.

Advance Praise for
Flying Off Everest

“As Babu, Lakpa, and Costello so eloquently illustrate, you don’t need oodles of sponsors, money, or gear to pull off your wildest dreams, no matter how zany. All you need is the uncompromising desire to see them through.”

—E
UGENE
B
UCHANAN,
AUTHOR OF
B
ROTHERS ON THE
B
ASHKAUS
AND FORMER EDITOR IN CHIEF OF
P
ADDLER
MAGAZINE

“Flying Off Everest features two dirt-poor Nepalese lads who are impossible not to root for as they attempt a ridiculously bold and unrealistic adventure. Along the way we learn lots about Nepal, Everest, Sherpas, and more. Costello, a serious outdoorsman and a skilled journalist, tells us how they reached the highest point on earth and why they were so determined to fly and paddle to a destination beyond the wildest dreams of most of us. An inspiring tale that happens to be a great read.”

“A book worthy of inclusion in the travel-writing pantheon.”

The people and events portrayed in this book are real. All descriptions are based on photographs and/or video, site visits, and interviews with the individuals who were actually present during the events described. Interviews were conducted with witnesses separately and, when possible, together. When multiple versions of a story existed, I chose the interpretations that best fit the verifiable facts. I have tried to be clear, within the text itself, what is speculation and what supports that speculation. All direct quotes and dialogue came from either recorded interviews or film footage from the actual expedition. No one included in this book was asked for exclusivity to his or her story. 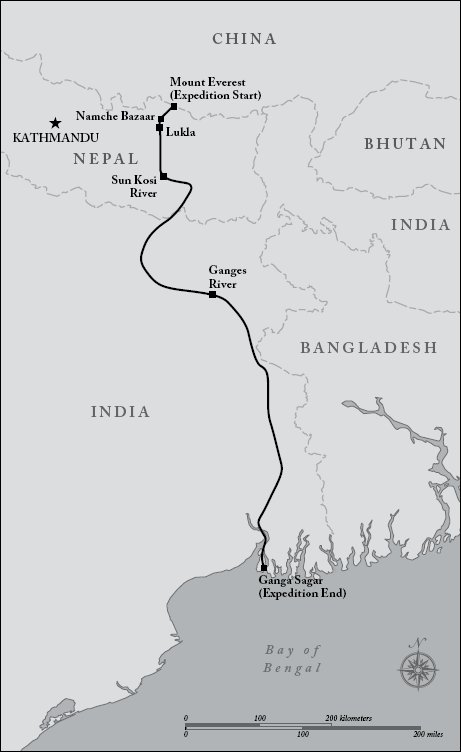 Part I: The Ascent

Pete Astles—British professional kayaker, expedition sponsor; shipped paddling gear from the United Kingdom for use on the expedition.

And this I believe: that the free, exploring mind of the individual human is the most valuable thing in the world.

A step forward there is a 10,000-foot drop into Tibet. Two men stand on a small patch of snow, looking down the North Face of Mount Everest. Waiting. Heel to toe. Connected at the waist by a pair of carabiners. They say nothing, listening to the wind whistling in their ears. Behind them lies a fluttering red and white nylon tandem paragliding wing, and another cliff. The 11,000-foot Kangshung Face. They know that jumping off the top of the world will mark only the beginning of the much longer, more audacious journey that they have planned all the way to the sea. And that flying off Everest in what is essentially a large kite should actually be the easiest part.

Lakpa, who is standing in front, nearest to the edge, looks at his watch. It reads 9:40 a.m. He and his climbing partner, Babu, a professional paragliding pilot and kayaker who has climbed only once before now, have been on top of the world for over an hour. They have not slept in two days. Standing at the edge of the troposphere, their oxygen-deprived brains are struggling to stay conscious—let alone think clearly about launching a paraglider at roughly the cruising altitude of a jetliner. Wearing crampons. The few, strained mouthfuls of warm noodles they forced themselves to eat the night before at Camp IV on the Southeast Ridge have long since vanished. However, they are not hungry. Above 26,000 feet, in the “Death Zone,” where life cannot sustain itself for more than a few days, at most, their bodies prefer to eat themselves.

Babu, a head shorter than Lakpa and standing directly behind him, is praying, dressed in a red and blue full-body down suit, an old, orange, sticker-encrusted helmet on his head. They need the wind, which is gusting up to 30 miles per hour, to stop.
For just twenty minutes,
Babu suggests quietly to the heavens. It’s how long he estimates they will need to fly off the mountain, down to the airstrip at Namche Bazaar, 18 miles and 17,743 vertical feet away.

Lakpa, wearing a yellow-orange and black one-piece down suit and an old blue skateboarding helmet decorated with a sticker of the Nepali flag, is having difficulties breathing. His head is reeling. His vision is dimming. Later, he will describe this moment as “critical.” For now, though, he tries not to fall over. They are down to one bottle of oxygen, which Babu is inhaling at a rapid rate. Lakpa, who has summited Everest three times before now, has turned Babu’s regulator on full flow. He figures it will be best for both of them if his friend stays as conscious as possible during the flight. Babu is the pilot, after all. And Lakpa can hardly fly a paraglider, even at low altitude. He just started learning to fly.

Allowing his gaze to drift over the horizon as he prays, Babu can feel the hard granules of icy snow blowing in the wind, hitting his face. Clouds roll slowly through the lesser mountains to the north. The air above is flawless cobalt.

A white ocean under blue sky.

Nima Wang Chu, one of only two young, high-altitude sherpas hired to help carry loads for the small, four-man, all-Nepali climbing team, sits unroped close to the other side of the narrow, gently sloping Northeast Summit Ridge. A few feet of overhanging corniced snow separates him from an abrupt descent down the Kangshung Face. He is clutching the nylon wing attached to Lakpa and Babu to the ground, trying his best to keep the 51-foot sail from catching in the wind. A low-altitude trekking guide back home in the Khumbu Valley, he also has been climbing only once before now. Phu Dorji (called “Ang Bhai”), the other young climbing sherpa in the group, is just
a few yards farther down the ridge, crouching behind a boulder and holding a small video camera. He’s the only one in the group attached to a rope—and likewise has no technical climbing experience.

The team only has enough food and oxygen left for two of them to make the two-day return journey to Base Camp. Unless the wind stops, Babu and Lakpa will have to descend without the aid of supplemental oxygen and face the inevitable bottleneck of climbers, guides, and sherpas climbing and descending on a “nice day” above Camp IV on Mount Everest.

They also think they will lose their chance to become the first people to paraglide off the summit of Mount Everest, the goal that had prompted them to plan their expedition in less than six months in the first place.

What Babu and Lakpa don’t know is that the feat that they think they’re about to attempt, and claim for Nepal, has already been done. Twice. A simple online search using the keywords “paragliding off Everest” would have told them about French paragliding pilot Jean-Marc Boivin’s initial record-setting solo flight from the summit in 1988, as well as the French couple Zebulon and Claire Bernier Roche’s successful tandem flight from the top of Everest in 2001. However, Babu and Lakpa didn’t do an Internet search before climbing the world’s tallest mountain and paragliding off of it. They’ve never heard of Boivin or the Roches.

Back on the summit, forty-two-year-old Benegas Brothers expedition leader Damian Benegas watches the unlikely Nepali crew prepare for their flight, along with his two clients: ESPN Latin Ad Sales executive Leonardo McLean and Argentinian climber Matias Erroz. Each of them has extensive high-altitude mountaineering experience on nearly every continent. And each has paid approximately $65,000 to be a part of the first all-Argentinian climbing team to reach the top of Everest, which they accomplished that morning—with the help of hired sherpas.

None of the climbers on top of Everest that day have any idea that, after flying off of the summit, the two Nepali men standing on
the ridge in front of them are going to continue on to fly south across the Himalaya and kayak nearly 400 miles on the Sun Kosi and Ganges Rivers out to the Bay of Bengal. That it will take them over a month. That they will be arrested, robbed, and nearly drowned. Repeatedly.

Then, as if on cue, the wind stops.

It’s the tremendously unlikely, and likely brief, break in the weather that they’ve been waiting for—and desperately counting on—for over an hour. Babu barely has enough oxygen left to last the flight. “No problem,” he says to Lakpa, smiling. He imagines himself somewhere else—a green, grassy foothill near his home in central Nepal, with a warm, gentle breeze—and signals for Nima Wang Chu to lift the wing.

They both know they are either going to fly off the mountain or die.

Last Breath by Michael Prescott
On the Edge by Avance, V.E.
The Stress of Her Regard by Tim Powers
Revolution of the Gods: The Battle for Sol Book Two by W.R. Hobbs
Destiny of the Light: Shadow Through Time 1 by Louise Cusack
Whitefeather's Woman by Deborah Hale
Alligator Playground by Alan Sillitoe
More Than a Lover by Ann Lethbridge
B009QTK5QA EBOK by Shelby, Jeff
the Mountain Valley War (1978) by L'amour, Louis - Kilkenny 03
Our partner