Read For Better or Worse Online

For Better or Worse 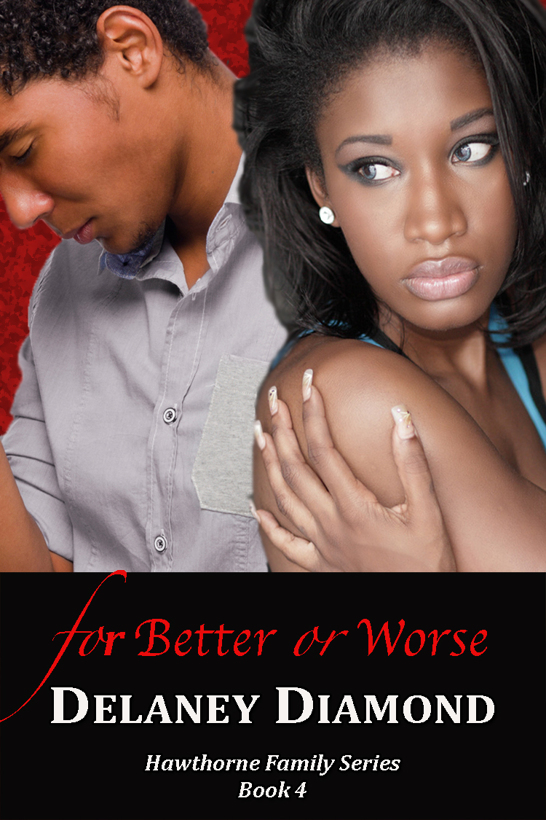 Will her actions save her marriage or destroy
it?

As a publicist for professional athletes,
Antonio Vega is used to solving problems and spinning stories to the benefit of
his clients. Yet he can’t seem to convince his wife that he has been and always
will be faithful, and her lack of trust tests the limits of his patience.

Cassidy Hawthorne-Vega grew up in a home rocked
by infidelity. When she suspects her husband is hiding something from her, she
takes drastic steps to uncover the truth. Her actions result in a confrontation
that threatens the bond of their marriage. It’s only when she reveals a painful
secret from the past that Cassidy learns to accept the love her husband freely
gives.

For
Better or Worse

This book is a work of
fiction. All names, characters, locations, and incidents are products of the
author's imagination, or have been used fictitiously. Any resemblance to actual
persons living or dead, locales, or events is entirely coincidental.
No part of this e-book may be
reproduced or shared by any electronic or mechanical means, including but not
limited to printing, file sharing, and e-mail, without prior written permission
from Delaney Diamond.

To all my
wonderful fans!

This is the
last installment of the Hawthorne Family series. Thank you for your support and
for going on this ride with me as each sibling found their happily ever after.

Antonio Vega was certain that somehow Murphy’s
Law had managed to set the entire universe against him. There was nothing he
could do but go down in the flames and hope that like the phoenix of Greek
mythology, he’d rise from the ashes.

Once again he’d screwed up with his wife.
Cassidy had been giving him the silent treatment ever since he missed going to
the hospital with her several nights ago when she’d driven to Athens
to
see her newborn nephew, Roarke Hawthorne III. Her sister-in-law had given birth
to her second child, but her first with Cassidy’s brother. When Antonio told
her he couldn’t make it because he had a meeting with a client, she’d given him
a look that made it clear not only did she not find his answer acceptable, she
didn’t believe him.

That morning she’d left for work without even
looking in his direction, and all he’d caught was a whiff of her perfume as she
stalked past him to the garage with her nose in the air.

Then his car wouldn’t start. On the way to the
office, he’d asked the cab driver to stop at the coffee shop because, as part
of his punishment, Cassidy hadn’t made any coffee for him this morning. Two
minutes after getting the coffee, he’d spilled it on the cab floor, burning his
hand in the process.

An accident on the highway caused a traffic jam
and prolonged his trip to work. He thought he could use the time to make phone
calls, except the phone died in the middle of a conversation because he’d
forgotten to charge it. When he stepped out of the vehicle in front of his building,
a kid on a skateboard bumped into him and knocked his briefcase from his hand,
forcing it open as it hit the pavement and allowing documents to escape and
flutter in the wind like bat’s wings.

Once he’d chased down and retrieved all his
papers—at least that’s what he hoped—he entered the building sweaty,
bedraggled, and coffee burned.

He stepped off the elevator and walked toward
his suite of offices, and his sole consolation was seeing his company name and
logo etched in glass—Vega PR Group. He almost smiled.

Lucinda Webb, his office manager, assistant,
and practically his business partner because of all she did, fell into step
beside him when he entered. She wore rimless glasses and kept her silver hair
in a neat bun at all times. Except for her hair, she didn’t look her sixty-odd
years, and she had as much energy as the rest of the staff, all of whom were
about half her age.

She started rattling off problems right away,
notepad in hand, pencil poised and ready. “Still no answer from Mark in the
sports section at the
LA Times
.”

“Stay on him. We need an answer today.”

“Two more calls from Gossip Police this morning
about Mitchell’s DUI. What should I tell them?” Gossip Police was a publicist’s
nightmare. The online magazine always managed to get the scoop on problems with
celebrities before the major news outlets. They were a thorn in his side.

“Tell them what we’ve been telling them: no
comment.”

“What for this time?”

“A hooker in Vegas.”

“I wish I were. Gossip Police has photos, and
they’re already posted on their Web site.”

He cursed and rolled his eyes heavenward. Yep,
his day kept getting better and better. “Get him on the phone for me. Tell Steven
to drop whatever he’s working on, because when I’m finished talking to Craine,
I’ll need him to work on the press release on this one. It’s priority.” Steven
was one of two full-time publicists working for Antonio. The other was Ronetta.
He also had a few freelancers on speed dial.

Lucinda nodded and scribbled on her notepad.
“Ventura won’t be able to make lunch with you today.”

A slow smile brightened Lucinda’s face. “She
had the baby.”

Antonio smiled back. “Everybody okay?”

Finally a bit of good news. “Send the usual,
flowers, a card—”

Lucinda waved her hand at him. “I know what to
do.” She walked away briskly, back down the hallway, which meant she’d covered
the most urgent matters. Nonurgent messages would be sitting on his desk.

Lucinda was his most dependable employee. She’d
been with him when he started his company three years ago, coming on as a temp
when he had very little money, and now she basically ran the place. He needed
to get
her
an assistant before she burned out.

Antonio set his briefcase on the floor beside
his desk and placed his jacket on the metal coat tree. He squinted his eyes
against the sun’s yellow rays beaming in through the half-open blinds that
covered the entire back wall of the office. Outside, the commercial buildings
of downtown Atlanta—banks, retail stores, and other office suites—rose from the
pavement, casting shadows on the people and vehicles hurrying along the avenue.

The room, decorated in a minimalist design of
steel and glass, only contained a few pieces of furniture: two guest chairs, a
couple of four-drawer file cabinets, and a desk, which was basically a long
rectangular piece of glass on steel legs. In one corner stood a tall green
potted plant that Cassidy had shown up with one day because she insisted his
office needed color.

Antonio’s days tended toward disorder, but his
office was immaculate. A photo of him and Cassidy on their wedding day, a
phone, his laptop, a paper tray containing the messages Lucinda left for him,
and his favorite pen were the only items on the desk. There was no clutter
because everything had its place. He couldn’t function in chaos.

The phone rang as he closed the blinds. When he
answered, Lucinda announced Michael Craine on the line.

“What happened?” Antonio asked, lowering into
the high-back chair and crossing his legs.

Michael launched into an explanation. At the
same time, Lucinda quietly entered with a cup of coffee and set it on the desk.
She must be clairvoyant. He eyed the cup gratefully and mouthed a thank-you
before she slipped back out. He took a sip. Perfect. He really needed to get
her an assistant—and a raise.

As a publicist for professional athletes,
Antonio was used to them doing foolish things. That’s why they needed someone
like him. But even he couldn’t believe what he was hearing as he listened to
his client explain how a member of the paparazzi had taken photos of him
leaving a Las Vegas nightclub with an
alleged
hooker on his arm—while in
the middle of a custody battle with his ex-wife. As if that wasn’t enough, he’d
gotten into a scuffle with the cameraman, cracking his camera lens when he
shoved him to the sidewalk.

“All right, listen to me,” Antonio said when
he’d heard enough. “I need you to stay away from nightclubs and hookers,
strippers, and any other women of ill repute.” Had he really said “ill repute”?
He sounded like his father.

“I was just having a little fun. This case is
getting to me, man.” Craine was an Atlanta Falcons wide receiver. As one of
their star players, he was easily recognized, which was not a good thing
because of the legal battle with his ex-wife.

Antonio silently sighed. “This is the part
where we lay our cards on the table. What’s more important to you? Your
daughter or your penis?”

“What kind of question is that?” He sounded
offended.

“Man, of course you know it’s my daughter.
She’s my everything.”

“Then act like it. Forget about your lower head
for a minute, and use the upper one to think about what you could lose. Because
if you keep this up, you might as well forget about seeing her unless your ex
allows it. Which defeats the purpose of going back to court because you wanted
to see your daughter more often, right? We both know how your ex feels about
you since you cheated on her during your entire marriage, and this little
episode isn’t going to help.”

The other end of the line was quiet. Antonio
waited him out.

“I don’t want to hear it. You’re a grown man.
If you love your daughter and want to keep seeing her without restrictions, you
need to make better choices.”

“Yeah, you did.” Antonio wasn’t letting up and
needed to make sure Michael understood what was at stake, because he’d
obviously forgotten.

“You’re right. You know how much I love my baby
girl. I didn’t even get to see her on her fourth birthday.” His voice thickened.
“How am I going to fix this?”

Antonio rubbed his forehead as he envisioned
ways to spin the story and clean up this mess. “We’ll get to work on it right
away and touch base with you within the hour with the press release. And
Michael?”

“Get the hell out of Vegas and come home.”

Antonio hung up and ran his hand down his face.
Although they could sometimes try his patience, he loved his job working with
athletes. The problem solving and last-minute scrambles caused an adrenalin rush
that kept him high for hours at a time. Bad decisions notwithstanding,
underneath their super talent and media persona, they were usually pretty good
people—no different from anyone else.

He knew, because his father had played
professional baseball. Antonio had come to know athletes and their world very
well, and he realized at an early age that what the media printed was often
misleading. Often, but not always.

Now that he worked closely with the journalists
and gossip bloggers to craft a different perception of those same athletes, his
first task when taking on a client was to find out what was most important to
them and work that angle. They all had that one thing that motivated them, and
contrary to what people thought, 90 percent of the time, it wasn’t money.

It might be their competitive spirit. Or it
could be earning a championship ring. Or the desire to take care of a wife—even
the need to earn approval from an absentee parent. In Michael’s case, it was
being in the presence of a four-year-old little girl who was his “everything.”