Read For the Sake of Sin Online 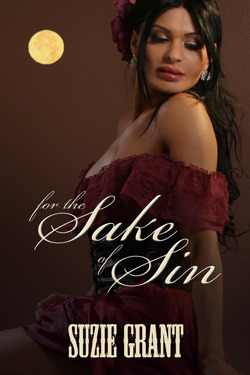 A retired assassin, a vengeful courtesan, and a night of explosive discoveries — revenge brings them together under the magic of a desert moon, when the courtesan known only as Sin seeks to hire a retired assassin to kill her lover. Can sharp shooter Gabriel Stone justify helping the woman for more than the Sake of Sin?

“
Suzie Grant really knows how to pull the reader into the story and keep them there.”
Author Phyllis Campbell

"Ms Grant is a truly amazing writer with an ability to capture her readers in an iron grip that doesn’t let go."
Mette Kiilerich Member of the Paranormal Romance Guild Review Team

“
I thought you didn’t meet with potential clients?”

A thrill of awareness shot through Gabriel Stone at the whispered words in the dark. Shadows danced across the adobe walls of the Spanish church ruins. “I don’t.”

Why am I here?

The silhouette moved and the rustle of fabric tantalized him, luring him to round the corner to confront the woman. But he held back. “Why did you choose me?” he asked.

“
Because you’re the best.” The sultry voice whispered with slightest Spanish lilt. Again tremors ricocheted through his body. Jasmine and almond oil wafted on the breeze and hinted at the exotic nature of the woman close enough to touch but just out of reach.

How many times had he heard that phrase?

Gabriel hung his head and shifted as the scrape of his boots against the gritty dirt floor echoed in the abandoned adobe church. Moonlight spilled through the open section of roof and pooled in the center of the room. A short burst of wind whistled through the ruins and lent eeriness to the atmosphere.

“
Captain McNielson recommended you, but he didn’t tell me your name or how to contact you.”

A soft sigh carried on the breeze. “I must admit I am disappointed.”

The softest chuckle sounded. “Funny, so am I.”

The sound of her breathe broke the silence and the slightest peek of her dress from around the corner tempted him. Dusky red material swished against the corner of the building and seemed out of place amongst the dirt and dull tones of nature, like a rose at midnight. When darkness washed all the color away, only the brilliantly hued petals could still be seen.

“
You never answered my question. Why are you here?”

He sighed. How could he, when he wasn’t sure of the answer himself. “I wanted to know more...” A
bout you
. “About the case.”

Her letters had intrigued Gabriel from the moment he’d opened the envelope revealing the subtle hint of jasmine. McNeilson had asked him to help the woman but he’d refused. The next day though he’d dropped an unsigned letter into the mail. Two days later, McNeilson had brought him another jasmine-dusted envelope.

A husky laugh accompanied the sigh. “But I thought you weren’t for hire.”

Silence settled like a heavy fog between them, coating everything with its moist weight. Had she heard his question? Seconds passed and the only sounds were the distant chirp of crickets and the lone howl of a wolf.

“
Every day gets a little worse.” Her voice wrapped around him, enfolding him within its sensual grasp and enticing him to give up his foolish, self-imposed torment. “I can still see their faces and hear their screams. They wake me every night as I lay in my bed...drenched in my own sweat. You have to help me silence them.”

Something inside his chest twisted and his brow furrowed. How easily he could relate to those very words. How many nights had he lain in bed as the visions of his past haunted him, and he’d been unable to quiet the voices?

Agony from a dark past choked off his every breath and rendered him speechless. How could he let go of the anguish and harness the emotions at night when he could barely control them during the day? And here stood another tortured soul. One who understood the way he suffered. One who sought to ease the pain.

“
This won’t make them go away,” he assured her.

“
I know.” She offered no excuses, no explanations for her actions, and no remorse. And yet, he could sympathize.
Some people deserved to die
.

Gabriel had given up playing judge and executioner. He no longer offered his gun for money and he refused to play God again. Not after...

“
The only thing I understand anymore is revenge.”

“
You’re wasting your time,” he whispered and leaned against the wall, kicking the broken pieces of adobe out of the way. The clunk of stone on stone fumbled in the silence. He reached inside his shirt pocket and retrieved the square, metal box of cheroots.

The strike of the match flared briefly revealing a pair of silver eyes before they vanished around the corner once again. He strained to see more clearly but the vision disappeared. He lit the cheroot and discarded the match.

“
It’ll make me feel better and give me peace,” she whispered in the dark. “Please...what do I call you?”

A hush fell as she awaited his answer.

His body blazed to life at those words and he tamped down the urge to round the corner and kiss her. “I wish I could help you but I’ve washed my hands clean.”
If only that were true
. “Understand it isn’t because I don’t want to help. I do. But I can’t live that life anymore.”

She exhaled. The darkness did little more than bring his imagination to life. And every image of the mysterious woman around the corner flashed in sordid detail. Entangled limbs, melded lips, and the flush of heat on pale cheeks beguiled him. A woman he’d never even seen before fascinated him as no other ever had. A woman whom he’d only corresponded with through letters and who now stood in the darkened chamber of an abandoned church in the middle of the desert. Her persuasive attraction included more than just her sultry voice and charm. He wanted to ease the ache in her chest — one he could relate to all too well — and assure her that revenge solved nothing. If anyone knew that, it was him.

Gabriel puffed on his cigarette and blew the smoke into the air. Through the haze of smoke and shadows, she eased out from around the corner. “Is there any way to change your mind?” she asked.

Lust pounded its way through his veins.
Yes
. “No.” The word slipped from his mouth.

He traced the figure in the shadows with his gaze. What little he could see drew him on a sensual torture rack and taunted him for turning her down. What man in his right mind would refuse this woman anything? The deep curve of her waist intrigued him and seemed made for the span of a man’s hands. Her slender frame drew his gaze again and again. And since he remained in shadows he allowed his curiosity free rein.

“
Call me Sin,” she whispered.

“
How fitting.” He chuckled. “The sin cast among men to punish him for his weakness.”

“
I like to think of it as the pleasure of a man’s greatest fantasies brought to life.”

“
In the hands of Sin,” he whispered.

Seconds passed before she turned on her heel and headed out the arched doorway. The wind fluttered her dark red skirts in her wake. “Now that you know my name, you know where to find me if you change your mind,” she said over one shoulder.

Gabriel remained in the shadows long after she’d disappeared and finished his cigarette. And he would see her again, for the sake of Sin.

Ava Sinclair settled back into the plush seat of the carriage and tapped on the roof. Her gaze moved back to the darkened corridors of the ruins and searched for any movement within.

Was that a flash of red from his cigarette or was she just imagining things?

The door clicked shut, and minutes later the carriage lurched forward. Curiosity about the man she left behind ran rampant through her thoughts and she couldn’t seem to make herself quite forget him. Although, she should. He’d said he was no longer for hire and yet somehow, she sensed she would see him again.

Hours later her carriage pulled into the cobblestoned drive and clattered to a stop next to the enormous fountain. The trickle of water lent the Spanish hacienda a tranquility that didn’t quite reach within. Descending from the carriage, she headed for the stairs. Lamplight spilled across the front entrance. The door swung open and revealed the very man she sought to kill.

Marco leered at her as she brushed past him. “Where have you been?”

Marco Santiago grabbed her wrist and yanked her around. “You think I don’t deserve an answer?”

Ava gritted her teeth. Peering over one shoulder she purred, “Would you have me describe my outing in sordid detail?”

Marco clamped his mouth closed and his eyes dropped to her mouth. “Was it good?”

Smothering a smile, Ava determined men only cared about who was better in bed. “Perhaps.”

He drew her closer and pulled her wrist up to his mouth to kiss the soft skin there. “Shall I remind you who is better?”

Marco swooped down and captured her mouth in a fierce kiss. He made her hotter than the desert sun in the middle of the day but...he was the man who’d killed her family. Slaughtered them like animals. And she would kill him — with or without Stone’s help.

Marco was a veritably insatiable lover, a man whose appetites never waned and who took his time with a woman...making sure she left his bed thoroughly satisfied. If only he weren’t a soulless man with no heart.

Ava had sought him out. As soon as she was old enough, she requested Madam Marcel’s tutelage on men and Sin — as she’d come to be known — and had used every weapon in her arsenal to lure Marco to her bed. The leader of an untouchable criminal empire, the very man who’d ruined her life and set her on this course for revenge.

As the most sought after courtesan in Texas and the only woman who occupied Marco’s bed, her goal was within reach. And yet she hesitated. She’d never killed anyone before and was uncertain if she were capable of such violence. But it was more than that...she’d somehow come to enjoy herself in Marco’s bed.

Even now with memories of her sister’s cries, she gasped as tingles ricocheted through her body at his touch. He had long ago mastered the art of lovemaking and his every touch branded her as his. But she wasn’t and she endeavored to make it clear. Ava sensed that was what kept him coming back for more —the fact that he could not have all of her. Her elusiveness drove him to distraction and she used it like the weapon it was.