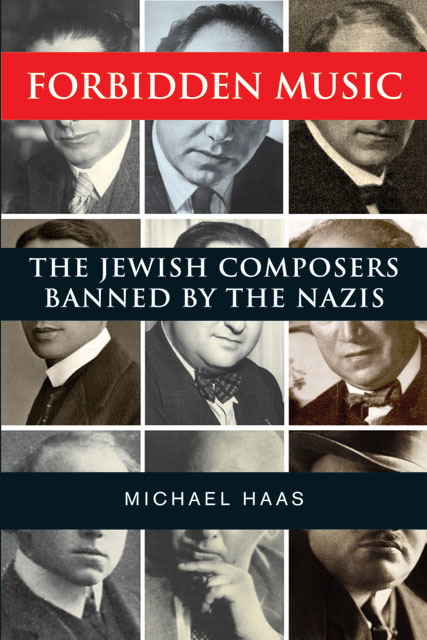 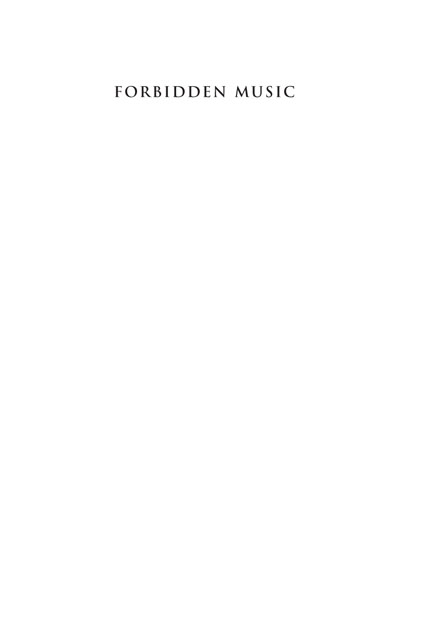 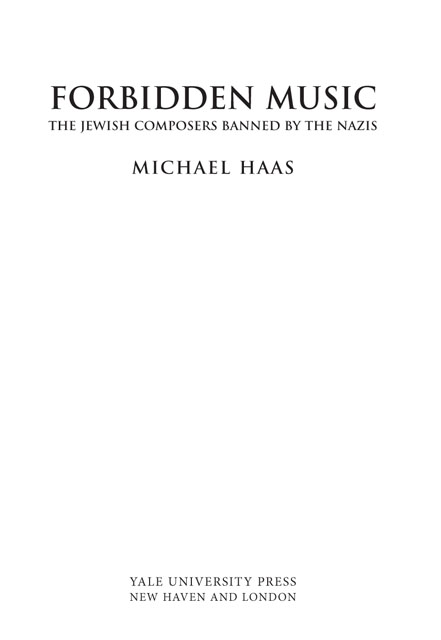 All rights reserved. This book may not be reproduced in whole or in part, in any form (beyond that copying permitted by Sections 107 and 108 of the U.S. Copyright Law and except by reviewers for the public press), without written permission from the publishers.

For information about this and other Yale University Press publications please contact:

The book is dedicated to the two men in my life who made it possible:

My father Benjamin Leopold Haas who provided me with the roots necessary to keep asking the right questions; and my partner Kevin Bell whose patience and support made it possible for me to take the necessary time away from the recording studio to write.

2 Wagner and German Jewish Composers in the Nineteenth Century

3 An Age of Liberalism, Brahms and the Chronicler Hanslick

4 Mahler and His Chronicler Korngold

5 The Jugendstil School of Schoenberg, Schrecker, Zemlinsky and Weigl

8 A Question of Musical Potency: The Anti-Romantics

10 Between Hell and Purgatory

‘Should what's German and true be forgot, its memory be the Master's lot’ (
Was deutsch und echt wüßt keiner mehr, lebt's nicht in deutscher Meister Ehr
) is Hans Sachs's final admonition at the end of Wagner's
Die Meistersinger von Nürnberg
and could have been understood as a veiled warning from the anti-Semitic Wagner to non-Jewish Germans on the cusp of Jewish emancipation. But Sachs's lines spoke just as strongly, perhaps even more resonantly, to Jews eager to contribute to what they had long perceived as a shared cultural heritage. In only 65 years, such intentions would be shattered and the loss would be felt by more than just the German nation.

As the producer for the recording series entitled ‘Entartete Musik’ released by London/Decca, I found myself confronting works by composers who had inexplicably vanished from the repertoire since their banning in 1933. My first encounter with some of this material took place in the mid-1980s when I began producing recordings of early orchestral works by Alexander Zemlinsky with Riccardo Chailly and the Berlin Radio Symphony Orchestra (now the Deutsches Symphonie-Orchester Berlin). That Zemlinsky was considered at all was thanks to the advocacy of the orchestra manager, Peter Ruzicka. When I was first shown the scores, I was slightly baffled. Chailly and Ruzicka were at the time both inquisitive musical progressives and the works they were considering reminded me more of Dvořák than their usual enthusiasms for more visionary twentieth-century composers. The fact that Zemlinsky was Schoenberg's teacher and brother-in-law offered an acceptable rationale and the recordings were surprisingly well received and were followed by Schoenberg's
Gurrelieder
. Then, as co-productions with
DeutschlandRadio
, (or RIAS, as it was then known), there came projects with Ute Lemper and John Mauceri, intended as the beginning of a series of the complete stage works of Kurt Weill. Disagreements with the Kurt Weill Foundation in New
York led to the idea being dropped and rather than return the designated budget to London/Decca, I pleaded that we should use it explore other composers whose names I kept encountering while researching Weill. I had begun to suspect that Weill was only the tip of a potentially large iceberg. I put this proposal to the president of the label, Roland Kommerell, who was not only German, but also a nephew of the literary historian Max Kommerell, former secretary to the poet Stefan George and later a close associate of the philosopher Martin Heidegger. For whatever reasons, Roland Kommerell clearly appreciated that money put into this particular large-scale recovery would be well spent. I remain grateful to him for his trust and faith in both the idea and my work. Assisting me with advice and scholarly support was the ever helpful and indefatigable Albrecht Dümling, who remains one of the first and foremost German academics to have dealt fearlessly and objectively with this period of cultural history. The composer Berthold Goldschmidt, with whom I would subsequently work very closely, not only took me through his scores bar by bar, but was able to offer sobering accounts of life in Germany before 1935 and later as an émigré in England. The integrity of the recording series would have been unthinkable without him. Additional support came from Thomas Gayda and others, some of whom came from Peter Petersen's ‘Music Exile Project’ at Hamburg University while others came from within London/Decca itself.

Though we were not the only label examining repertoire banned by the Third Reich, we were the first with international distribution and the financial wherewithal to record large-scale operatic and orchestral works. The series ran for nearly 10 years resulting in a total of 30 different projects and won many awards. The conductors Lothar Zagrosek, John Mauceri, Riccardo Chailly and Charles Dutoit along with the singers Ute Lemper, François le Roux and Matthias Goerne, and the instrumentalists Yo Yo Ma, Sabine Meyer and Chantal Juillet brought not only idiomatic authority but also a good deal of much-needed prestige. Sadly, all the recognition the series received could not save it from the turbulence of the recording industry during the final years of the last century. With the sale of Polygram to Universal Music, the series was cancelled and we went our separate ways.

I was subsequently approached by the Director of the Jewish Museum of Vienna to advise on a large exhibition being curated by Leon Botstein on the subject of Vienna as a city of music and Jews entitled ‘Quasi una fantasia’. This was followed by my appointment as Music Curator, resulting in a number of exhibitions on various Viennese composers and allowing me the opportunity to do more than skim biographies and worklists in search of the most appropriate pieces to record. For the first time, I was able to explore the lives of
individual composers, and the events that shaped them. This would not have been possible without an army of experts who assisted on each exhibition. These included the families of Hans Gál, Erich Korngold, Erich Zeisl and Egon Wellesz; Reinhold Kubik of the International Gustav Mahler Society in Vienna; Hannes Heher and Hartmut Krones of the Wellesz Foundation and the Austrian Hanns Eisler Society; Karin Wagner who co-curated the Erich Zeisl exhibition; Christopher Hailey, who is not only the leading authority on Franz Schreker but also an expert on the musical environment of prewar Vienna and Berlin; Brendan Carroll, whose Korngold biography finally gave us a scholarly reference that dealt with the composer as more than just a Hollywood phenomenon. Special thanks must go to the American relatives and friends who provided support and information: Gladys Krenek, Kathrin Korngold and her mother Helen; Barbara Zeisl-Schoenberg and the entire Schoenberg family, with particular gratitude to E. Randol Schoenberg the grandson of both Arnold Schoenberg and Erich Zeisl; the Los Angeles composer and critic Walter Arlen; and the grandson of Ernst Toch, Lawrence Weschler, as well as the grandson of Karl Weigl, Karl C. Weigl, along with Juliane Brand.

The Jewish Museum in Vienna is a centre of excellence and its curators could hardly have been bettered. They have all achieved wide recognition in their various fields: Michaele Feurstein, Werner Hanak, Wiebke Krohn, Marcus Patka, along with the extraordinary senior curator Felicitas Heimann and the museum's director, Karl Albrecht-Weinberger, whose support gave the institution, and its exhibitions and the accompanying catalogues, intellectual authority. The designer Thomas Geisler and his team created large-scale, multi-media, presentations so that the exhibitions were interactive, didactic and even theatrical. Perhaps most importantly, the museum's finance director Georg Haber made sure it could all be paid for. This resulted in critical praise and extraordinary visitor numbers. With the departure of Dr Albrecht-Weinberger, Georg Haber and Dr Heimann, along with much of their team, I moved to new opportunities. I am grateful to Gerold Gruber at Vienna's Music University, where together we head Exilarte, an organisation devoted to the recovery of Austria's composers lost after 1938.

Without the support of many organisations throughout Europe and America, the job of cultural restitution would hardly be possible. These include London's Jewish Music Institute and its indomitable director Geraldine Auerbach, who invited me to continue the work started at Decca as soon as she heard of the cancellation of the recording series. She helped assemble a committee that has remained a constant support and information resource. In addition, we all became close and mutually supportive friends. Together we make up the International Centre for Suppressed Music based at SOAS
(London University): Martin Anderson, Betty Collick; Erik Levi and Lloyd Moore (who both provided invaluable editorial assistance for this volume, with Erik Levi helping to locate important documentation and Lloyd Moore reading and commenting on each chapter), Malcolm Miller, Gavin Plumley, Jutta Raab-Hansen and Peter Tregear. Additional thanks must also go to the historian Philipp Blom. In America, further support has come from the OREL Foundation, thanks to the conductor James Conlon and the Foundation's Director Robert Elias who also contributed invaluable editorial advice and guidance. Finally, Malcolm Gerratt from Yale University Press who provided the much needed impulse to put e-pen to e-paper and most of all, my editor Nigel Simeone, who helped sharpen the narrative and focus the arguments in each chapter. All of them, and many others too numerous to mention, have helped to made this book possible, and I am deeply grateful to every one of them.

Translations are my own unless otherwise stated.

This a magic cauldron be,

If you place your head inside

You'll witness all your future courses

A German future here to see

Within this fetid sink;

Yet don't be sickened by the scum,

Or its penetrating stink

With a smile, she bade me hither,

I quickly hid my fear

I hurried towards her, ever eager

To see what held this sphere

What I saw, I shall not say

To silence I am vowed

With reluctance I recall

It seemed a mix of unwashed masses:

Ovens from a tannery in hell

That still continued to rise

The fanning of dung it seemed to me

Of three-dozen fields in size.

Of Saint-Just's words, I know quite well

Once uttered on charitable boards

That sore afflictions, with rose-oil and musk

Won't work to cure the hoards

This rancid reek of a German future

It shattered my defences.