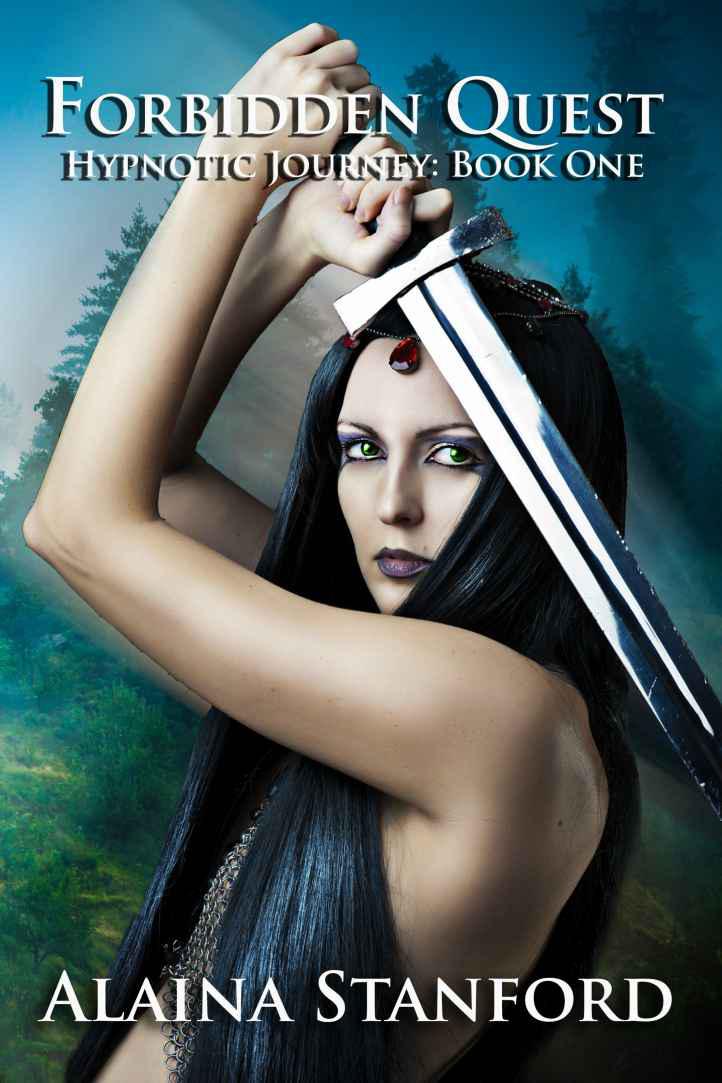 Wouldn't it be cool to suddenly have the battle skills of a seasoned warrior? Wouldn't that be even better if the battles felt real but there was no physical risk to you? Wouldn't it be perfect if the hypnotist in charge of your session was not insanely evil and using you as a weapon in a plot for revenge?

Four friends, two in love, two in hate enter into a Group Hypnosis study attempting to introduce fantasy adventures to small groups. They are promised a video game type of adventure rescuing an Elf Queen from her crystal prision as elf warriors, a sorceress and a fairy.

As soon as they fall under the good doctors spell they begin to realize the adventure is more real than they could have ever imagined. They find themselves in a hostile world they can't seem to escape from.


No part of this publication may be reproduced, or stored in a retrieval system, or transmitted in any form or by any means, electronic, mechanical, photocopying, recording or otherwise, without written permission of the author
.
Table of Contents

“You’re not going?  After all the work I’ve done on this project and
now
you’re not going
!
”  Nicole asked, loudly into the phone.
She thrust her hand out to her assistant
, shook her head
s
o viciously her short brown hair flew from side to side as she
motioned toward the door.
Nicole
sat down at her desk clutching the receiver with fury.  “Plus
,
the deposit is non-refundable
,
we can’t cancel and we can’t reschedule.  Dr. Strong said it had to be this weekend
,
there are no other slots available.”

The raspy voice of her latest romance, Tom Norton
,
answered calmly, “Niki, I’ve got viral meningitis.  You don’t fool around with something like that.”  Tom lay in bed, his dark brown hair was
disheveled
and there were dark circles under his eyes.  He rolled over to grab the bottle of painkillers his doctor prescribed and added, “Dr Maan said to get in bed and forget about the rest of the world for the next week.
I’m
surprised at your response and hurt that you don’t seem to care.  You’re actually more upset about losing the deposit instead of missing out on a weekend with me.”

Resisting the guilt that threatened to wash over her, Nicole took a deep breath and shifted her chair so she could reach her computer while they talked.  She explained, “Tom, it’s not the money and you know I want to spend time with you.
It’s
just that it will be months before I can manage to weasel another free weekend out of my boss.  We
won’t
get another shot at this.  Dr. Strong said he was pulling out of Landon and moving to Miami in a few weeks.
He’s
the only hypnotist in the country that’s offering these group fantasy sessions.

Its
going to be the next big trend in discount vacations.
”

“You
sound like you can’t afford a trip to Miami
?
St Louis is in the middle of the country
,
flight
s to anywhere don’t cost that much from here.
”  Tom chided, sinking back into his pillows waiting for the painkillers to take effect.

“Contrary to what you might believe, I don’t get a bonus when I win a case.  The District Attorney would prefer to take his best Assistant DA to bed rather than give me a bonus or time off.”  She growled pulling up her three new cases with a few quick entries
on her keyboard
.

“Ok, ok, I’ve heard all this before.”  Tom winced, tired of Nicole’s complaints.  “I asked Jack to take my place.  He was bumped off his flight to St. Thomas this morning and actually has some spare cash.”

“Absolutely not!”
Nicole declared, digging her pink
,
perfectly manicured nails into the keyboard.

“Come on, it won’t be that bad, remember?  You’ll be under hypnosis all weekend.”  Tom countered with a sign as his eyelids began to close.

“Anyone else but him, Tom.”
Nicole moaned in resignation and shoved hard against the desk pushing her chair
against
the wall behind her.  “I know he’s your friend.”  She added tapping her fingernails viciously against the arm of the chair.  “But the man is a complete washout.  He has no ambition, no ethics,
no
morals and if
you
think he’s going to pay you the money you
put down on
this trip
,
you are out of your virus infected mind.”

“Niki, he was just here.  He took me to the doctor this afternoon because I
couldn’t
drive.  He paid me my share of the deposit and headed home to grab his bags.”  Tom answered firmly.  “Give him a break, he’s a free spirit.  He
didn’t
have rich parents to pave the way like you did.
He
didn’t
get a full ride to Yale like you did.
He’s doing the best he can with what he’s got.”

Looking out the small grimy window of her small, dreary office, Nicole’s foot began to twitch impatiently as she envisioned a weekend with Jack’s
annoying smile
.  “Maybe we should cancel.  I’ll throw a few things together and nursemaid you through the weekend.”  She answered in a monotone.

Tom chuckled immediately regretting it as pain shot through his temple.  “I appreciate your offer, Niki, really I do.  I know it would kill you to sit here all weekend and watch over me.  So let’s not pretend that’s a firm offer.”  Tom smiled through the pain
,
keeping his eyes closed against the burning
sunlight that tried to sneak though the drawn blinds.  “The bed’s starting to float and I haven’t had any sleep in about 32 hours so I better go.  Take it easy on Jack, brown eyes,
he’s
a good guy.  It’s surprising how complicate
d
he really is, you’d find that out if you gave him a chance.”

“I did that once, remember?  He made a pass at me.”  Nicole snapped, gritting her teeth.

“He was drunk and it was a joke.”  Tom frowned, “That’s just his way.
It’s
important to Jack to approve of the women I date for some bizarre reason.  If Jack
didn’t
like you he’d be over here every possible minute trying to run you off.  I’ve told you before; you’re the first girlfriend of mine in years that he hasn’t given a hard time.”

“Well if he’s being nice to me, then I’d hate to see it when he’s being mean.”

“Right,”  Nicole sighed, surrendering to a wrecked weekend
.
“Do you need me to drop anything off before I head to the airport?”

“What?”  Nicole jumped from her chair.  “Oh no, Tom
!
I am NOT riding in a plane that
he’s
flying
!  Are you insane?”  Nicole’s answer was silence, followed by deep snoring.

The plane ride to the private Landon airport in Kansas proceeded exactly as Nicole suspected.  Instead of concentrating on piloting the plane, Jack apologized for not supplying his three companions with headsets.  Then Jack proceeded to shout over the noise of the small plane's engine as he told one inane joke after the other the entire flight. Prim and proper Sarah Sims blushed and giggled at the array of graphic limericks. Her blonde curls and blue eyes flashed in the
afternoon sunlight
as she politely
corrected Jack’s raw anatomical terms. Eventually Jack began to comment that Sarah was in actuality not a nurse practitioner but one of his more attractive
school teachers
in disguise.

Squeezed in next to Sarah looking more like a squashed sardine than a professional hockey player was Sarah’s
college sweetheart
, Todd Hopper.
Overflowing the tiny area assigned as his seat Todd had to wrap his arms around Sarah in order to allow her room next to him. Apparently oblivious to his own discomfort, Todd guffawed so loudly at Sarah and Jack's ridiculous banter that Nicole considered attacking Jack and killing them all.

She’d
been given the privilege of sitting next to Jack.  His wavy brown hair and sky blue eyes enchanted most women, but not her.  Not since that
night
he shoved his tongue down her throat when Tom wasn’t looking.

Now sitting next to Jack was more than just mental agony.  The stench of a fresh workout drifted over to her as she scowled at his failure not only to shower
but
to change his clothes in anticipation of coming with them to Kansas instead of jaunting off to the Caribbean.  He looked as if he had spent all his prep time preparing to
be stranded
on a deserted island with his brightly colored floral shirt, ragged cut off jean shorts and dusty sandals.  All he lacked was a poorly constructed straw hat.

Jack’s broad shoulder jolted her constantly, with each peal of laughter he invoked in himself and the others.  That combined with the turbulent bumps and jars of the small plane increased
Nicole’s
desire to call an end to the entire weekend.

The Landon Airport looked more like an old football field snuggled in the middle of a large field of corn than an airport.  Their landing was a bit bumpy but uneventful.  They pulled their luggage out from behind the back seat and waited 45 minutes
for their ride to arrive.  With nothing
more
to do than watching the
country sun
sink lower in the
sky
as they swatted bugs and watched for snakes.
Finally
an old Toyota Minibus appeared on the dirt road at the far end of the field.  The driver of the vehicle appeared to be as old and feeble as the bus.

“Howdy folks!”
He said
as he
climb
ed
out of the bus and headed to snatch the women’s bags
.
“I’m Fred Johnson, owner of this here farm.  Nice to see you all!  Dr Strong asked me to get you
all downtown
to his hotel
.
So off we go!”

Fred tossed the girls bags in the rear of the bus and stood back for Jack and Todd to do the same with their bags
.  T
hen
he
loaded them all
up and turned around in the airport grass
and headed back down the dusty road.  Jack continued his comic routine, telling the best jokes from ev
ery country he had ever visited as they headed into town.

Arriving in a silent fume, Nicole pushed past the smiling travel agent as he commented on the ancient architecture of the large stone building they were about to enter.

Children of the Dust by Louise Lawrence
The Beauty Is in the Walking by James Moloney
The Everything Toddler Activities Book by Joni Levine, MEd
Ghost Watch by David Rollins
Hollywood and Levine by Andrew Bergman
Bindweed by Janis Harrison
Anywhen by James Blish
Gigantopus from Planet X! by Tony Abbott
Resolution by John Meaney
Las cenizas de Ángela by Frank McCourt
Our partner