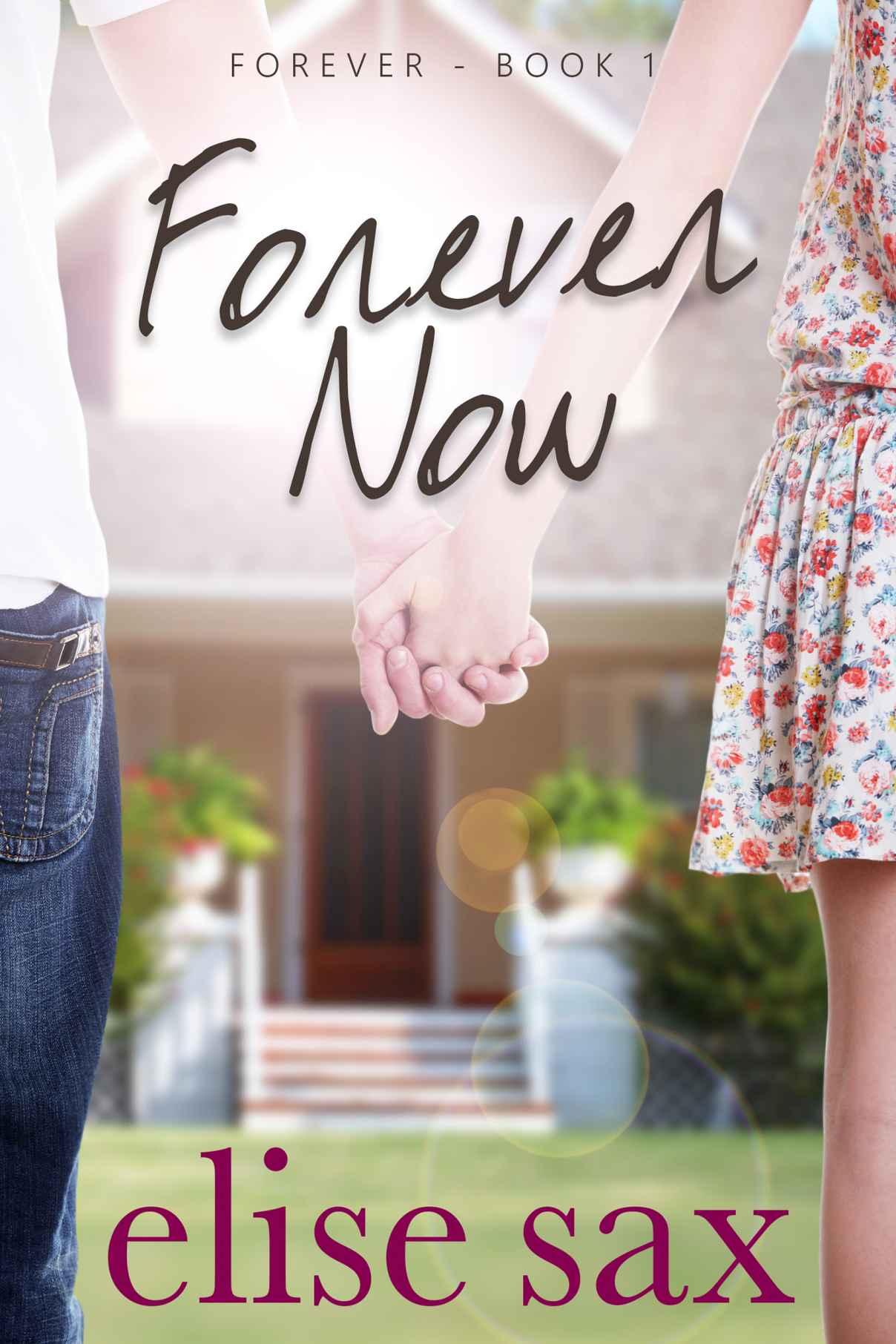 Forever Now
is a work of fiction. All rights reserved. Names, characters, places, and incidents are the products of the author’s imagination or are used fictitiously. Any resemblance to actual events, locales, or persons, living or dead, is entirely coincidental.

An Affair to Dismember

Wish Upon A Stud Series

Forever is composed of nows.

What would Emily Dickinson do? Since she never left her room, writing poetry while stuffed in a high-necked corseted dress, I don’t think she would go out like
this.

I threw a sweater over my mirror. I couldn’t bear to look at my body parts oozing out of the bikini my mom bought me. I mean, made me wear. I mean, threatened me if I didn’t wear it at her pool party.

Pool parties. I bet Emily Dickinson never had to go to a pool party.

I poked my stomach, which pooched out below my belly button, on full display in the white bathing suit. I tried to suck in my pooch, but that’s when I noticed the mushy part pushing against the side strap of my bikini bottoms. It was like my butt had infiltrated my hip.

I had side butt.

I crawled into bed and pulled the covers over my head. It felt good to hide. Maybe my mom would think I left town, I hoped. I had Pop Tarts stashed in my nightstand, so I could last a couple days hidden like that in my room. Well, a day and a half—I really liked Pop Tarts.

It was as good a plan as any.

No matter what, there was no way I was going downstairs dressed in a tiny white bikini. No way. NO. WAY. My mom could drag me out by my fingernails and I wouldn’t go. She could take away the television and waterboard me, and I wouldn’t go.

My bedroom door swung open and banged into the wall. “What the hell!” my mom screeched.

I stopped breathing. I didn’t move a muscle. I stayed under the covers and thought invisible thoughts. That is, I tried to be invisible, which really wasn’t hard, normally. I had been basically invisible for sixteen years, which was my entire life.

“I’m not a moron,” Mom yelled. “I know you’re hiding under the covers. You’re not exactly flat as a pancake, you know.”

Ouch. When she wasn’t ignoring me, my mother was good at being mean.

Although lately, she wasn’t her normal ogre self. She had spent the morning dancing around the house in her bikini, putting up streamers, and setting up the blender to make endless margaritas for her guests. She was in her happy mood, her usual mood when she found a new boyfriend. Mom went through boyfriends like I went through ninety-nine-cent notebooks.

And I went through a lot of ninety-nine-cent notebooks. You see, I was a writer, or wanted to be a writer. In fact, I wanted to study writing in Paris like Hemingway and Gertrude Stein. But since I was an invisible girl in San Diego with a bunch of cheap notebooks and Bic pens, I had no chance of ever making it to France. I was going to have to continue to be Emily Dickinson it in my room by myself. I mean, write in my notebooks that nobody would ever see until way after I was dead…which hopefully would be before I had to traipse downstairs in the white bikini that showed too much extra me.

I was going to start my senior year in a month without hope of ever seeing the Eiffel Tower. Instead of the Sorbonne, I was most likely only going to see the local community college and a would-you-like-fries-with-that-job after I graduated.

“Don’t screw this up for me,” she ordered, pulling the blankets off my face. “You’ll come down for at least an hour and act like you’re happy to see him. If I see that sour puss on your face, I’m going to slap it off.”

My mother had slapped the sour puss off my face twice before. So I knew she was serious. Still, I didn’t want to be anywhere near her boyfriends and even less at her pool party, which would be filled with her drunk friends from her work and from the bar she liked to hang out at in the evenings.

“You might have some fun,” my mom added. “Put on that nice bathing suit I bought you, and for the love of God, no hats.”

She yanked my sweater off the mirror and checked herself out. She was four inches shorter than my five-foot-seven, a tiny little woman with a tiny little body topped with a tiny little nose and long, silky smooth blond hair. She was wearing a white bikini, too, but there were no extra bits sticking out. No pooch.

I hated that she had bought me the bikini. She would skin me alive if I didn’t wear it. My mother usually forgot that I needed stuff like clothes and shoes for school and then all of a sudden she would buy me something like a bikini, even though I didn’t inherit her bikini body, or earrings, even though my ears weren’t pierced.

My mom checked out her makeup in the mirror one more time and skipped out of the room. New boyfriends sure made her happy.

I started to sweat and kicked off my covers. I couldn’t figure out how to get out of the party and my walk of shame. I didn’t think my mother would fall for an Ebola excuse. Thankfully, I stumbled on a technicality. I had to wear the bikini, but I could wear something
over
it.

I had just the right t-shirt. It said
Moe’s Tires
and hung to right above my knees. I slipped it over my head and took a look in the mirror. Perfect. For the first time all day, I was happy, just like I had a new boyfriend. It’s funny what a large swathe of cotton can do for morale.

I was tempted by the hat, hanging on the back of my bedroom door, even though Mom would blow a gasket if I wore it. The hat was wide-brimmed and made of straw, and I felt like a movie star in it. I had bought it with my babysitting money, which I usually saved to buy milk, cereal, and peanut butter when my mother forgot to buy food.

I decided that hats were
me.
And since there wasn’t much me in the world—I was invisible, remember—I didn’t think there was much harm in a couple of floppy hats. My mom didn’t agree, and she didn’t let me wear them anywhere near her, especially when The Boyfriend was around.

According to my mom, I didn’t know how to act around boyfriends, and maybe she was right. I had never had a boyfriend. Not even close. I mean, if you don’t count Jerry Katz in third grade, who tried to marry me during recess. I said no, and he moved on to Tiffany Banks by the end of the day.

I pulled my long brown hair into a ponytail, left the hat on the door, and walked downstairs just in time to see my mom in a lip-lock with her new boyfriend.

Okay, here’s the thing. Once, when I was eight years old, I heard my only friend’s mother tell another woman that I was “neglected.” I tucked the word away until the next day at school when I looked it up in the dictionary.

My mom went through long patches of time where she forgot that I existed, and it usually happened when she got a new boyfriend. So, I was the kid who walked herself to kindergarten, and I was the kid who ate Skittles and Hershey bars for lunch every day until the lunch ladies got me on free lunch. And free breakfast.

But being neglected isn’t the worst thing about having a mom with lots of boyfriends.

Going downstairs and seeing her in a lip-lock is the worst thing about having a mom with lots of boyfriends.

Her newest boyfriend—
The Boyfriend
--was tall and handsome (she said) with one of those beards that looked like he forgot to shave that morning. He was half-French and half-Puerto Rican and had traveled everywhere. He insisted that Mom throw out all of our frozen food and forced me to eat disgusting stuff like paella. He also loved wine and always brought a bottle to the house when he visited.

In fact, he had a bottle in his hand while he stuck his tongue down my mom’s throat. I wondered if he had a whole supply of wine in the trunk of his car or something.

It went on for a while. There were even moaning and sucking sounds. I looked at the clock on the entrance way wall. I had fifty-five minutes to go before I would be allowed to return to my room. Fifty-five minutes can take a long time.

“I told you to put on the bathing suit!” My mom screeched, pulling away from The Boyfriend’s lips with a smacking sound. “I paid good money for that!”

I jumped back in surprise and embarrassment. Mom went from gross kisser to seething screamer in a split second. She stared me down, her chest heaving with anger.

Some of the party guests peeked their heads into the entrance way to see what made my mom yell, and The Boyfriend looked at me like I was the mosquito who wouldn’t stop buzzing around his head.

I shrank to nothing. It was like
Honey, I Shrunk the Kids,
but I was even smaller. Humiliated small. Mortified small.

But not small enough.

I closed my eyes and willed myself to disappear.
Anywhere but here
, I wished. Anywhere. Prison. Somalia. Math class.

“It’s under the shirt,” I said, my voice coming out all croaky and quiet. I could feel my face go red. I was a terrible blusher.

I looked back at the clock. Fifty-three minutes to go.

“Laura,” The Boyfriend said to her, changing the subject. “Let me introduce you to my son, Cruz.”

Like magic, the attention turned away from me and my humiliation to The Boyfriend’s son. Mom and her already half-drunk guests stared him down with appreciation.

I don’t know why I didn’t notice him before because he was the best looking boy I had ever seen. Not really a boy. A man. Maybe nineteen, I figured.  He had dark hair and eyes but light skin, and he was tall and muscular. He was beautiful, like a model, shining under the lights.

He shook my mother’s hand, and the three of them walked on the tiled floor further into the house without saying a word to me.

There. That’s the moment my life changed. No, I didn’t realize it, yet. I didn’t know that anything special had happened. I certainly didn’t know that Cruz would save my life, and I would save his—at least for a while. That we would love each other and our love would be dangerous.

The soul should always stand ajar, ready to welcome the ecstatic experience.

Eros Element by Cecilia Dominic
Blue Kingdom by Max Brand
Not The Leader Of The Pack by Leong, Annabeth
The Rancher and the Rock Star by Lizbeth Selvig
Salem's Daughters by Stephen Tremp
The Unintended Fiancé (Captured by Love Book 4) by Miranda P. Charles
River's Song - The Inn at Shining Waters Series by Carlson, Melody
Be With Me in Silicon Valley: The Juliette Trilogy (The Princesses of Silicon Valley - Book 3) by Anita Claire
The Pledge by Howard Fast
Charters and Caldicott by Stella Bingham
Our partner