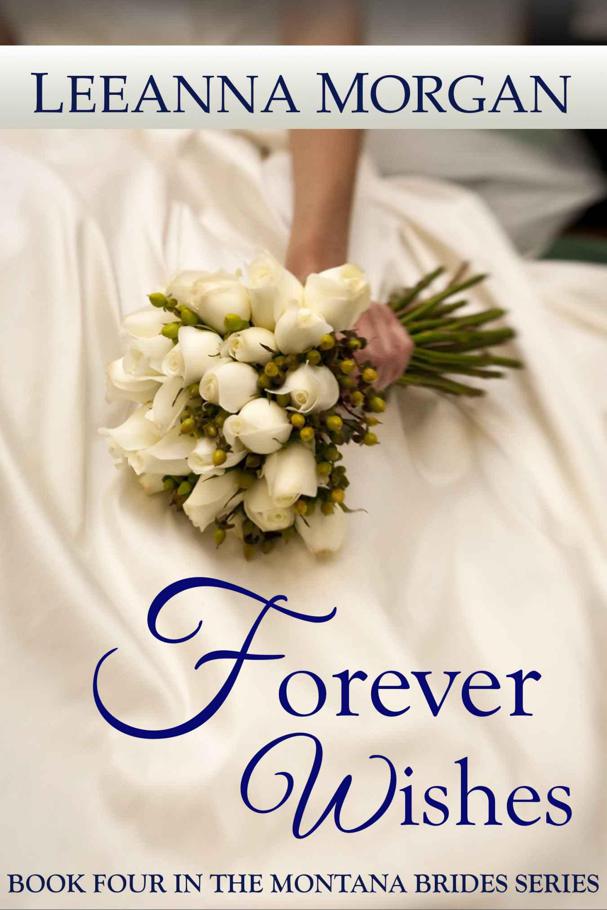 This is a work of fiction. Names, characters, places, and incidents are the product of the author’s imagination, and are used fictitiously.

Any resemblance to actual events, locales or persons, living or dead, is co-incidental.

All rights reserved. Except as permitted under the US Copyright Act of 1976, no part of this publication may be reproduced, distributed or transmitted in any form or by any means, or stored in a database or retrieval system, without prior permission of the author.

Wanted...a man with a big heart, a wicked sense of humor, and a baby on his

Erin has always dreamed of being a mom, and after her parents’ death that need got a whole lot stronger. With a baby phobic ex-fiancé on the loose and no new man in sight, Erin knows that her options are running out fast.

Jake Williams is a successful corporate lawyer. He moved back to Montana to help his family, not fall for a librarian with more on her mind than cataloguing rules. But he's about to find out that love and a determined woman can change his life forever.

Forever Wishes is the fourth book in the Montana Brides series.

To my beautiful sister and where it all began.

“I’m not going home until a tall, dark, sexy cowboy sweeps me off my feet.” Erin closed the pickup door and grinned at her best friend.

“Shh. Keep your voice down,” Nicky whispered. “Someone might hear you.”

“Maybe I want them to.” Erin’s gaze roamed around the parking lot of the Baxter Hotel in downtown Bozeman. More than a few males were walking toward the entrance, but each of them had a female firmly attached to their suit clad bodies.

Erin might be a lot of things, but she firmly believed in first come, first served. If she smelt the faintest whiff of another woman in a man’s life, she crossed him off her list of potential dates quicker than a fly swat whipping through the air.

She took another look around. Who was she kidding? She’d hardly been on a date in the last ten months. She doubted she’d even know what to do with a man if he showed the slightest bit of interest in her.

Nicky locked the pickup and dropped the keys into her purse. “We’re going to a charity ball, not an all you can eat human buffet. And stop pulling on that bodice. The whole thing’s going to fall down around your waist if it gets any lower.”

With a mischievous smile, Erin ran her hands down the side of her crimson dress. She tweaked her satin bodice again before Nicky’s hands slapped her fingers away. “You’re turning into a mother hen,” she laughed. “Just because you’re engaged to Sam, it doesn’t mean I’m off limits to the male population as well. This dress is practically decent.”

Nicky stared at Erin’s chest. “It started off decent when you wore it to Ellie’s wedding, but that new bra has pushed every square inch of decency out the window.”

Erin pulled her shoulders back, straining the seams of the gown even further. “I’m sick of being sensible,” she growled. “I’m a librarian, for God’s sake. How sensible can one person get? I’m going to break free of the mould I’ve squished myself into. I want to be frivolous.”

The scowl on Nicky’s face worried Erin. “What have you done?”

Erin and Nicky had been friends since kindergarten. From personal experience she knew ‘almost nothing’ usually turned into ‘something’. “You’d better tell me now before we get into the hotel.”

Nicky pulled her black lace shawl over her shoulders, stalling for time.

Crossing her arms in front of her chest, Nicky glared at Erin as if it was her fault they were having a heart-to-heart discussion in the middle of the parking lot. “The thing is, Sam’s friend invited us to the ball. And we invited you.”

Erin felt her buffet option disappear in a puff of Chanel perfume. “And where is this
friend
going to sit?”

Her mouth fell open. “I’m twenty-eight-years-old. I’m too old for a blind date.” So much for her night of frivolity. Sam and Nicky had tied her to someone as desperate and dateless as she was.

“Don’t get all pouty on me. Jake’s a lawyer. He moved back home a few months ago.” Nicky rolled her eyes at the scoffing noise coming from Erin’s disbelieving mouth. “He’s a great guy.”

“A great guy?” Erin walked toward a row of miniature trees covered in twinkling fairy lights. His life sounded just about as riveting as hers. Instead of cataloguing rules and collection management plans, his life revolved around interpreting statutes and locking criminals behind bars. Lawyers didn’t live for the moment. Erin wanted spontaneous and impulsive. Everything that lawyers and librarians weren’t.

“Don’t be ridiculous. One look at you and he’ll be blown away.”

“Don’t try wiggling out of this with flattery. I’m looking for hot romance, not a night of polite conversation with a boring lawyer.” A taxi honked its horn. Erin’s head shot up. Twenty feet and she’d be a free woman. No Nicky, no Sam, and most definitely no lawyer.

Nicky’s gaze flicked toward the street. “Don’t even think about it.”

With a lingering glance at the row of taxis, Erin hauled the strap of her evening purse over her shoulder. “You are in so much trouble. If he starts snoring during dinner I’m going home and leaving you to explain what happened.”

Nicky pulled her toward the entrance. “I’ve met Jake, and you won’t be disappointed.”

Erin stared at her reflection in the glass doors and yanked her bodice up a notch. She didn’t want him getting the wrong idea, especially if Jake whatever-his-name made her want to bolt for the nearest exit.

Arm in arm, Erin and Nicky marched into the lobby of the Baxter Hotel. Luxurious sofas and armchairs sat in a room three times the size of Erin’s entire house. An enormous crystal chandelier hung from the ceiling, casting a soft mellow light on the gleaming wooden floors.

Sam met them by the front counter.

Erin stared at the goofy grin plastered across his face. “I don’t care how crazy love has made you, Samuel Delaney. I don’t appreciate being set up on a blind date.”

He looked at Nicky. “She knows?”

Nicky shrugged her shoulders. “Of course she knows. We’ve been standing outside for the last ten minutes debating the merits of hot romance over a blind date.”

Erin cringed. She might be looking for a bad boy, but Sam didn’t need to know all the gory details. “You’re not supposed to tell him that.”

Sam’s brown eyes filled with laughter. “I’m kind of hoping for some hot romance too.”

Erin shook her head. “That’s too much information for a woman who wants to live dangerously.” She looked around the room rather than at the two lovebirds making eyes at each other. “So where’s Mr. Desperate and Dateless?”

“Right behind you,” a male voice said.

Erin froze. Oh man, she’d just put an instant fizzle on a blind date that wouldn’t be going anywhere. She turned around, ready to eat a double helping of humble pie.

Her gaze landed squarely on a pair of unsmiling lips.

She looked a little higher. Dark blue eyes, the color of a stormy Montana sky stared back at her. Heat slammed through her body. So much for the stuffy lawyer she’d been expecting. This man had more sex appeal in his little finger than most of the men she’d ever met.

She stuck her hand out, trying to make up for her runaway mouth. “I’m Erin Reynolds, your desperate and dateless partner for the night.”

Jake stared, and Erin wondered if her low cut bodice and flirty intentions had been such a good idea.

“I’m Jake Williams and I guess neither of us is desperate and dateless anymore.” Then he smiled, and shook her hand, and Erin knew she was in trouble.

A tingle shot along her arm, headed toward her heart and then took a quick detour to her brain. A man that looked as good as Jake didn’t need to be set up on a blind date. What if there was a reason Nicky had invited her to the ball at the last minute? What if he had another date lined up and she hadn’t been able to make it? Erin looked at the entrance. Maybe the taxi hadn’t been such a bad idea after all.

“Sam told me he’d invited you to the ball about an hour ago.” Jake glanced across at the guilty couple looking too pleased with themselves. “We don’t have to call this a date.”

“What do you want to call it?”

He shrugged his shoulders. “What about dinner companions?”

Erin shook her head, imagining crinoline skirts and acres of petticoats. “It sounds like something out of a Jane Austen novel. I like desperate and dateless better.” The grin on his face almost made her pleased they’d been set up.

“Now that you’ve settled on the reason you’re here, are you ready to go into the ballroom?” Sam asked.

Erin looked up at Jake.

He gazed at her with a twinkle in his eye. “I’m ready if you are?”

Erin took a deep breath. Fate and a mischievous friend had brought her to the charity ball. Tonight she was going to take control of her life and be a little crazy. Maybe a lot. But that depended on the man beside her.

“Ready and willing.” She held onto Jake’s arm as he led her across the lobby. Apart from good looks and a smile that would disarm the prickliest of women, he seemed like a nice person. And that suited Erin better than finding a man with a body made for action, but a brain stuck in the ice age.

“Have you been here before?” Jake asked.

“A few times.” She swallowed the lump in her throat. She’d been to more weddings at the Baxter than she could remember. And she would have been here for her wedding if her baby-phobic ex-fiancé hadn’t left Bozeman four weeks before their wedding.

But she wouldn’t let what happened nine months ago ruin tonight. She was here to enjoy herself, not remember what had happened after Matthew left.

As they walked through the double doors, Erin stared at the transformed ballroom. Sheer fabric draped from the middle of the high ceiling to the outside edges, ending in a cascade of gold silk sliding down the walls. In the center of the room a huge floral arrangement in red and gold hung over some of the tables. Fairy lights had been woven through garlands of green leaves in the ceiling, giving the ballroom a magical woodland feel.

Looking across at Jake she shook her head in wonder, “I’ve never seen the Baxter look so beautiful. I feel like I’ve stepped into a fairytale.”

Hell, Fire & Freedom (Fighting for Freedom) by Callahan, Shannon
Alphas Unleashed 4 by Cora Wolf
The Lonely Hearts Club by Radclyffe
Come To Me by Thompson, LaVerne
More Than Allies by Sandra Scofield
Male Me by Amarinda Jones
Shiny Broken Pieces by Sona Charaipotra
Shadowed: Brides of the Kindred book 8 by Evangeline Anderson
Agent Provocateur by Faith Bleasdale
Quiet by Susan Cain
Our partner