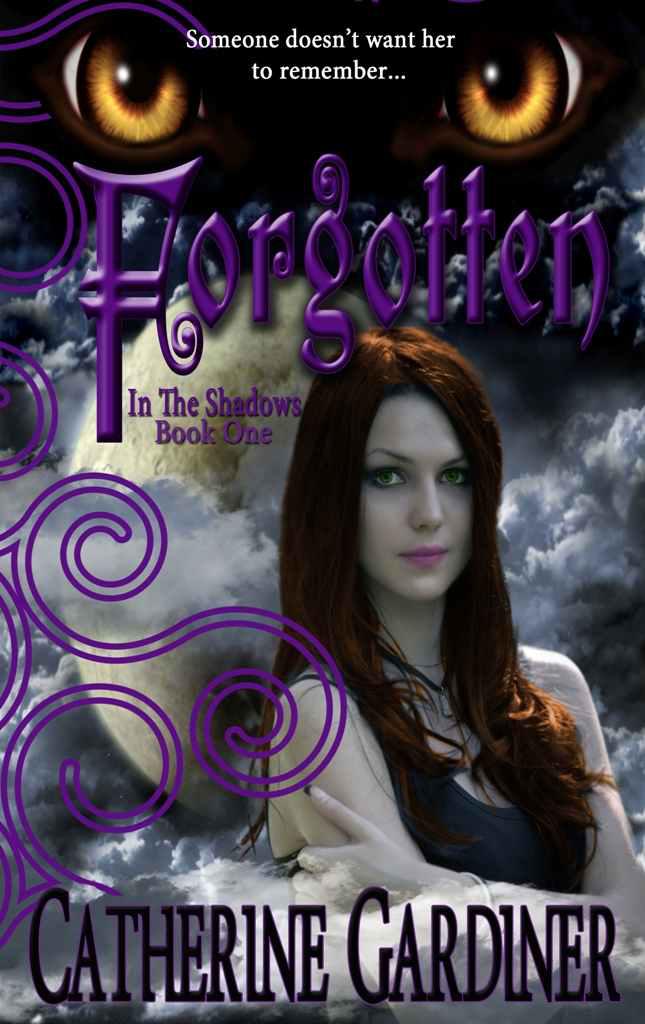 FORGOTTEN
IN THE SHADOWS
(Book One)

The right of Catherine Gardiner to be identified as author of this Work has been asserted by her in accordance with sections 77 and 78 of the Copyright, Designs and Patents Act 1988.

All rights reserved under International and Pan-American Copyright Conventions. No part of this publication may be reproduced, distributed, or transmitted in any form or by any means, including photocopying, recording, or other electronic or mechanical methods, without the prior written permission of the publisher, except in the case of brief quotations embodied in critical reviews and certain other noncommercial uses permitted by copyright law.

This book is a work of fiction. Names, characters, places, and events are either products of the author’s imagination or are used fictitiously. Any resemblance to actual events, locales, or persons, living or dead, is entirely coincidental.

To my dear parents, who gave me the freedom to go after my dreams.

My wonderful sister, Suzanne, who inspires me everyday.

And lastly, to Buttons (& Coco) who have kept me company on those lonely nights and put a smile on my face when I have felt blue.

Katrina placed the textbook she was studying back on the library shelf and glanced down at her wristwatch. The silver dial read 3:27 p.m. Three minutes until the library closed.

Wow
, Katrina thought.
I am really cutting it fine today.

Stuffing the notes she had just written into her book bag, she hurried out of the school library, down the two flights of stairs, and out of the main school building.

Outside, storm clouds had started to fill the sky and cast an unfriendly grayness to everything.

If I cut over the football field I should be able to get home before it starts to rain,
Katrina mused.

Hurrying past the deserted bleachers Katrina started to make her way across the Clayton Falls High School football field. At about quarter way across she heard her cell phone ringing.

“Anton!” Katrina answered without looking at her caller display.

“Where are you? You should have been home over an hour ago,” a male voice crackled down the phone line.

“Katrina, you know I don’t like it when you walk home from school alone.” Anton paused. “I can’t see why you couldn’t have ridden with me.”

Katrina laughed softly. “You know I had an English assignment to finish in the library after last period. Besides, I am more than capable of getting home by myself.”

“I’ll be home soon, so stop acting like a macho jock! There are no juniors here to impress.”

“Katrina, turn back. I’ll pick you up in front of the school.”

“I know that you can¬—” Anton started.

But his words were cut off: the phone was dead.

Damn!
Katrina cursed.
I knew I should have charged it last night.

Katrina sighed and took out her portable CD player from her book bag, flicked through the CD’s playlist until she came to her favorite track, put in her earphones and turned up the volume. By now the evening air had dropped in temperature, and she pulled her jacket tighter around her body.

With her music distracting her, Katrina did not hear that someone had followed her from Clayton Falls High School library and across the school’s football field. Nor did she hear her stalker raise a baseball bat and take a swing at her skull.

The last thought Katrina had was of her sister, Suzanne, before her memory faded behind a veil of darkness.

The first drops of rain started to fall as Katrina’s attacker picked up the cell phone and book bag that Katrina had dropped and left her for dead, before starting to walk away with a bloodied baseball bat in hand.

“Katrina?” a woman called from downstairs.

“Yes?” Katrina answered, turning away from the window.

“Are you nearly ready, sweetheart?” the woman continued.

“Yes, Mom,” Katrina called. She walked to the top of the stairs, looked down, and smiled. “I’ll be five minutes tops!”

“I know your ‘five minutes’; we’ll be here for another half hour at least,” Katrina’s foster mother said with a smile, looking up at the girl she now thought of as her daughter.

Mrs. Sinclair was in her late thirties. Her figure was slender, her blonde hair long and wavy, and her brown eyes sparkled when she smiled.

Katrina watched the person who had taken her in nine months ago disappear into the living room. Nine months ago – when she had awoken from her coma.

After Mrs. Sinclair was out of sight, Katrina turned and went back to her bedroom, stopping on the threshold to look around the room.
Her
room.

Tears suddenly welled up in Katrina’s eyes. At first she tried to blink them back, but it was futile and in the end she just let them fall.

“What’s wrong?” a small voice said from behind Katrina.

“Not much, Jess,” Katrina replied without turning.

“You’re the only person that I’ll let call me that, you know. So, do you normally start crying for no apparent reason?”

“No,” Katrina whispered. “It’s just that everybody has been so nice to me since I came to live here and none of you knew me. You’re all just taking me at face value.”

Jessica came into the bedroom and sat on Katrina’s bed. She took Katrina’s arm and maneuvered her until she had guided her foster sister to sit next to her. “Katrina, I know it might be hard for you to believe this, but even though we’re not blood related I still think of you as my sister and hopefully my best friend too,” Jessica said, looking earnestly at her.

Katrina nodded, then, wiping her tears away with the back of her hand, went to her dressing table and began to brush her long auburn hair. After a short time, Katrina stopped and went back over to her bed to hug Jessica.

“Thank you,” Katrina said, sitting back down.

“What for?” Jessica asked.

“For everything that you and your parents have done for me!”

Katrina glanced at her watch and gasped. Pulling Jessica to her feet, both girls ran from the room, laughing.

When they reached the hall, Mrs. Sinclair was waiting for them with her hands on her hips.

“Where have you two been?” Mrs. Sinclair asked, exasperated.

“Getting ready,” Jessica said, struggling to get into her coat.

Jessica was seventeen and tall like her mother, with straight honey-blonde hair that reached her waist, and amazing sapphire-blue eyes that reminded Katrina of a sleek Siamese cat.

Katrina looked at her own reflection in the hall mirror. It showed a girl Katrina hardly recognized as herself. Some features seemed vaguely familiar like her hair and her emerald-green eyes, but apart from that, Katrina was staring at a stranger. A beautiful seventeen-year-old stranger.

“Katrina, when you have stopped admiring yourself …” Jessica joked, pulling Katrina away from the mirror and down the hall toward the door.

“Ha ha, you’re so funny, Jess. You should ask for a spot on
Saturday Night Live
!” Katrina retorted sarcastically.

At the hall closet, Katrina withdrew her black denim jacket, and they exited the house.

Outside the wind was cool and fresh for August, and the clouds in the Oregon sky were threatening rain for later that day. Katrina braced herself against the cold as she walked to the montreal blue metallic 1998 BMW 5 Series 540i sedan that was in the driveway, her hands deep in her jacket pockets.

“Come on, girls; we’re going to be late if we don’t get a move on,” Mrs. Sinclair urged, opening the car door and getting in behind the steering wheel. Jessica jumped into the passenger seat next to her mother, and Katrina climbed into the back.

A feeling of dread washed over Katrina as Mrs. Sinclair reversed the car down their driveway and onto the tree-lined street.

“Then why do you look so worried?” Mrs. Sinclair asked, concerned.

“So am I!” Jessica said from the passenger seat, her eyes squeezed shut.

“Why in heaven’s name should you be nervous?” Mrs. Sinclair asked her daughter.

“Because you keep on taking your eyes off the road!” Jessica answered with a nervous smile.

After a couple of minutes’ silence, Mrs. Sinclair stole another quick look at Katrina in the rearview mirror before asking, “Katrina, is there anything wrong with your sessions with Doctor Clairmont?”

“No, everything’s fine. It’s just that I’ve been seeing her for the last eight months and I still can’t remember anything from my past,” Katrina said, looking away from the window and to Mrs. Sinclair.

“Well that’s the thing with amnesia; it can last for weeks or even years.”

“Mom, can I get out here?” Jessica asked suddenly, taking off her seat belt and grabbing her shoulder bag from underneath her seat.

“Thanks, Mom.” Jessica opened the door and stepped out of the car.

“Jessica?” Mrs. Sinclair called through the window that her daughter had left open.