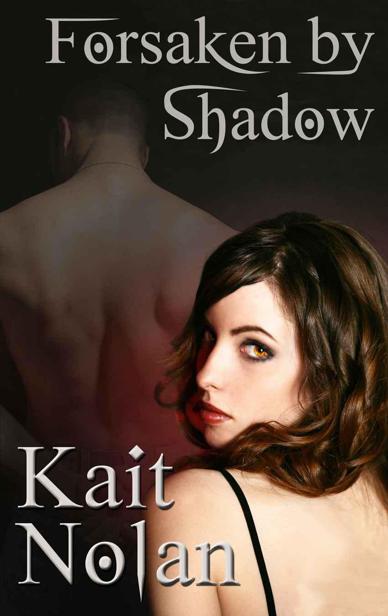 A Novella of the Mirus

Written and published by Kait Nolan

AUTHOR’S NOTE: The following is a work of fiction. All people, places, and events are purely products of the author’s imagination. Any resemblance to actual people, places, or events is entirely coincidental.

This ebook is licensed for your personal enjoyment only. The ebook may not be re-sold or given away to other people. If you would like to share this book with another person, please purchase an additional copy for each person you share it with. If you’re reading this book and did not purchase it, or it was not purchased for your use only, then you should return to Amazon.com and purchase your own copy. Thank you for respecting the hard work of this author.

This book would not have been possible without the help of so many others. I want to thank

Susan, for years of stupendous friendship and outstanding service as crit partner. There is no better editor;

Zoe, for beta reading and her invaluable assistance in this indie publishing endeavor;

Brenna, for being cover artist extraordinaire;

Sherri, for her unparallelled assistance in researching Las Vegas; and

My husband, Allen, for letting me ignore him to write.

Council of Races:
ruling body of the paranormal races

Firecaster:
paranormal race capable of controlling but not producing fire

Hunters:
assassins under the command of the Council of Races; typically work alone; not limited to a particular race

Investigation and Enforcement Division (IED):
division of the Council of Races responsible for investigation of crimes involving the paranormal races and enforcement of Mirus law

Shadow Walkers:
special ops division under the command of the Council of Races; typically work in teams; recruited based on ability rather than race; have the ability to control and travel by shadow

Wylk:
race of wolf shifters; no kin to werewolves

H
e
didn’t open his eyes when he heard the scream. Though his body all but vibrated with the need for action, some inner instinct counseled him to remain still. Listening.

A roll of thunder, then a muffled crash from another room.

Rage pumped through him, hot and bright as a blast furnace. He had to fight. He had to get to…  Had to protect…
her.

A hard
thud
shook the wall. A whimper, then a deeper grunt.

His ears strained to pick out other sounds, anything to determine how many he needed to fight.

Faint voices through the wall, and then a rhythmic
thumping
. Not quite like the steady thud of fists on flesh.

He stilled. Not
her.

Then where was she? Where was… He tried to latch on to a name, but the memory skittered away. Rage dimmed fractionally with panic.

Why couldn’t he remember her name?

He tried to call up
her
face. But like her name, it simply wouldn’t form in his mind, trickling from his thoughts like sand through loose fingers.

A few moments later, he heard a man, presumably Vinny, bellow release. Then everything lapsed back into relative silence.

The sharp scent of whiskey burned his nose, mixing with the pungent odor of stale sweat. The smell permeated the coarse fabric his face was crushed against. His mouth was cotton-dry, coated with a sour film that he tasted with each inhalation.

He tested his limbs, and with motion came pain. Hissing at the sear of agony that shot up from his hands when he flexed them, he stilled again, waiting for the burn to level off enough that he could draw full breath again. He rolled over to a chorus of creaky bed springs and opened his eyes. Lightning flashed beyond the threadbare curtains at the single window. In its brief glare, he saw a low dresser, a desk, and an overturned chair. He counted absently.

A low grumble of thunder. Another flash. A glimpse of a television mounted on the wall, an empty luggage rack below.

He reached for the bedside lamp, gritting his teeth as he flicked it on. With a sense of dread, he squinted in the light of the single, pitiful bulb to see what the hell was wrong with his hands.

They were wrapped in gauze. Lots of it. With fumbling fingers, he unwound the bandages. Both palms were blistered with ugly burns. Even in the dim light, he could see that the skin was charred, curling, and covered in some kind of salve.

He rolled to his feet, moving quickly through the room. In the bathroom he flipped on the light, another anemic fluorescent bulb that flickered several times before illuminating the cracked tile and outdated fixtures. The burns looked even worse in here. What the hell had happened to him?

He glanced into the spotted mirror. Blinked. Then he leaned in close.

The face looking back at him was young, early twenties, shadowed by a few days of scruff. Beneath the scruff, an ugly bruise darkened the left side of his jaw. Dark, somewhat matted hair hung to his shoulders.

A new kind of fear slid greasily through his system.

He sucked in air, taking another look around. There were no toiletries save the pitiful bar of soap and tiny, cheap shampoo and lotion beside the gray plastic ice bucket. He went back into the room for the gauze, sinking onto the bed to rewrap his mangled hands.

Panic was a decent analgesic.

He knew nothing. Not his name. Not his birthday. Not where he was or where he was from. Not how he’d gotten here. Every single shred of information related to his identity was an absolute blank. By the time he finished re-bandaging, unanswered questions jostled in his brain like restless cattle. The sheer number of them terrified him.

There have to be answers here somewhere,
he thought, getting up to search more thoroughly.

The room had looked better in the dark. Fading wallpaper in a pattern popular in some decade well before he’d been born hung from the walls in peeling strips. The few pieces of furniture were scarred, cheap wood veneer. The TV above the luggage stand had knobs. A nearly empty fifth of Jack Daniel’s lay on its side on the bedside table. A small puddle stained the already splotchy shag carpet below.

He didn’t like whiskey. Didn’t taste whiskey on his tongue. So why was it here?

There were no bags, but he did find a set of car keys and a money clip on the desk. The clip held cash but no driver’s license, no credit cards. No clue to who he was. He dropped the keys and the money into his pockets and stalked to the bedside table.

Beneath a Gideon Bible, he found a phonebook.

“
What the fuck am I doing in Nevada?” Baffled, he tossed the phone book back into the drawer and started to scrub both hands over his face, hissing at the pressure on his palms.
Okay, Nevada. One of the fifty states. At least I know there are fifty states. That’s something, right?
Having an answer to one question helped stem the panic that wanted to rise up and choke him.
One down, the rest of my life to go.

Rain slapped him in the face the moment he opened the door. Across a parking lot, he could see a neon sign proclaiming Canyon Inn. Except the “y” kept flickering out. Parked mere feet from the door of room number 13—
Great—
was a ’69 Dodge Charger in serious need of a paint job. The whole thing was a mottled patchwork of gray primer and an ugly ass shit brown. He wondered if it was his.

He moved down the sidewalk, heedless of the fact he was getting soaked. The night clerk, a pimple-faced blond guy with a length of facial fuzz for a beard, looked up in surprise when he stepped into the office.

“
I need to know what name room thirteen is registered in.” His voice sounded rusty with disuse.

Puzzled, the clerk flipped through a ledger. He ran one skinny finger down the page, then shook his head. “There is no name.”

“
No name?” He all but growled it, leaning over the counter and into the night clerk’s space.

Another thought wormed its way into consciousness. “A woman. There was a woman. Did you see her with me?”

The kid gave a nervous laugh. “We’re paid not to see.”

He straightened, thinking. “I’m not looking for discretion. I’m looking for answers. Did you see me with a woman?” He enunciated each word of the question as if that would somehow jog the clerk’s memory.

“
As far as I know, you were alone. I wasn’t the one who checked you in and there’s been a do not disturb sign on the door. That’s all I know, I swear.”

Another shake of the head. No help there.

“
When does the reservation expire?”

“
Fine. I’m checking out.” He left the kid sputtering and went back out in the rain.

The keys in his pocket did, in fact, belong to the piece of shit Charger. With a silent prayer, he slid the key into the ignition. The engine caught and roared to life, surprising and pleasing him. While the car rumbled and the rain beat a staccato tattoo on the roof and hood, he flipped open the glove box and rifled through the contents: an ancient owner’s manual, a tire gauge, a switchblade, and a faded printout that was the registration. He leaned over toward the glove box light to get a better look at the name on the form.

Crooked Little Vein by Ellis, Warren
Windswept by Cynthia Thomason
The Boy in the Cemetery by Sebastian Gregory
The Intern Affair by Roxanne St. Claire
The Kingmaker by Haig, Brian
Mind Trace by McCaghren, Holly
Necrocide by Jonathan Davison
Something Secret This Way Comes: Secret McQueen, Book 1 by Sierra Dean
Game Without Rules by Michael Gilbert
Flight of the Golden Harpy by Susan Klaus
Our partner