Fountain of Secrets (The Relic Seekers) 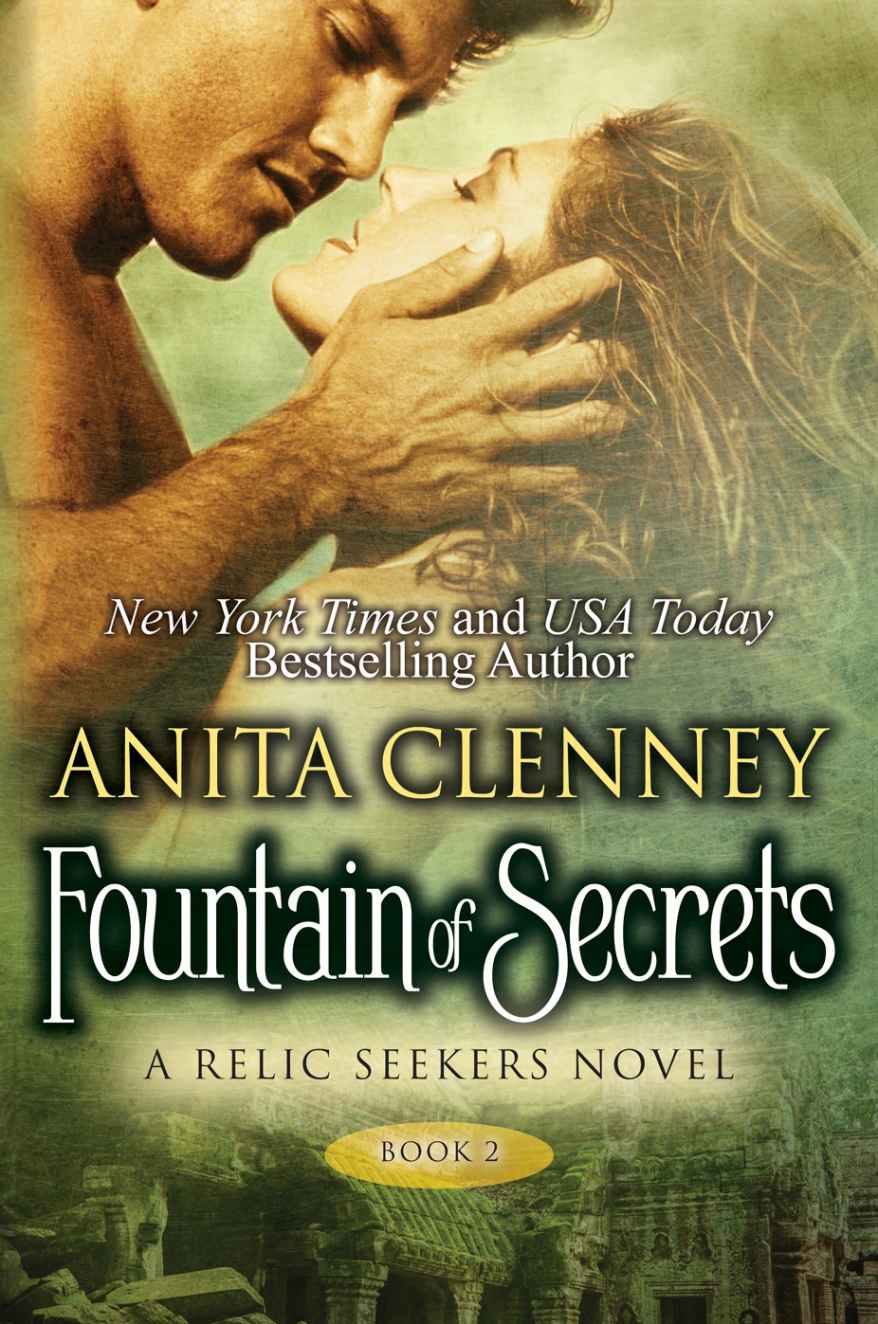 Guardians of Stone (The Relic Seekers)

This book is dedicated to my mom and dad, two of the kindest, gentlest souls I know, whose presence reminds me that in spite of my love of mystery and adventure, nothing is more grand or amazing than real life.

“Never do outrage nor murder, and always flee treason; also, by no means to be cruel, but to give mercy unto him that asketh mercy, upon pain of forfeiture of their worship and lordship of King Arthur forevermore; and always to do ladies, damsels, and gentlewomen succor, upon pain of death. Also, that no man do battle in a wrongful quarrel for no law, nor for the world’s goods.”

“To ride abroad redressing wrongs, To speak no slander, no, nor listen to it, To honor his own words as if his God’s.”

“To love one maiden only, cleave to her, and worship her by years of noble deeds, until they won her.”

—The Knights of the Round Table

W
AKE UP!
” T
HE
young girl shook her friend’s shoulder. He woke with a gasp, his forehead covered with sweat. “You’re dreaming.”

“Do you have some water? I’m thirsty.”

He drained the water, his heart still pounding with visions of swords and battles… and the other part that made no sense. The grave.

“Was it the same one again?” the girl asked.

He nodded. “I wish I knew what it meant.”

“It means you’re special,” she said.

Special. How could he be special if no one wanted him?

I
T WAS THE
roar that woke her. Kendall lay for a moment trying to figure out if it was real or a dream. Her ability to sense things was sometimes a curse. She eased out of bed and walked to the door of her bedroom at Nathan’s mansion. He had insisted they stay here when they returned from Italy two days ago. He and Jake were trying to assess the threat level since the Reaper was obviously still out there.

She opened her door and stepped into the hallway. Another door opened near hers and Jake stepped out, disheveled dark hair hugging his neck, a bare chest that would make a nun lust, and, of course, underwear. She darted back into her room, hoping he hadn’t seen her. At least he hadn’t been naked, which according to him was how he preferred to sleep.

Dismissing the roar as part of her dream, since all the guards hadn’t come running, she lay down and tried to go back to sleep, but the image of Jake half naked burned behind her closed lids. She’d been avoiding him for the past two days. She didn’t have flings with coworkers, and for now they were both employed by Nathan, whether Jake wanted it or not. But avoiding Jake wasn’t easy. He appeared around every corner, tempting her with just a look.

Nathan, on the other hand, was more secretive than ever, which was disappointing since all three of them had bonded over their bizarre experiences in Italy. Those kinds of experiences tended to bring people together or make them steer clear. Nathan appeared to be steering clear.

Giving up on sleep for the moment, she found her bag and pulled out her relics log. For as long as she could remember, she had kept a record of the relics she discovered. Other girls had diaries and boys. She had her log, her relics, and Adam. Kendall opened the log and grabbed a pen from her nightstand.

She paused there, letting the words she had written sink in. The Spear of Destiny. Unbelievable. But it was real.

Location—Umbria, Italy, hidden inside a monk’s coffin in catacombs.

Nathan recently discovered the existence of a secret order in Italy called the Protettori, a group that protects powerful relics along with vast amounts of treasure. He sent me, along with Jake Stone, a bodyguard/mercenary…

Her pen was poised over the paper… Hot guy? No, that wouldn’t do…
to Italy to investigate the claims and search for a mysterious box, which we later discovered held the Spear of Destiny. We found a castle hidden in an isolated area, surrounded by large statues that seemed to function as a sort of electric fence. There was a guard named Raphael who didn’t want us there, but who reluctantly played host. He put us in the tower room, which turned out to be our prison. We escaped and found hidden catacombs underneath the castle grounds where the Spear of Destiny was hidden with one of the monks inside his coffin. Three thieves followed us and stole the spear. From what we can determine, the thieves were hired by a man known as the Reaper, as in the Grim Reaper of relics. He steals collections and kills the owners. He appears to be rich
and well connected, not to mention impossible to find. A man named Edward Romano was also working for the Reaper, but he was trying to double-cross his boss and take the spear for himself. He’s dead now as well, killed by a ghost. Yet another unbelievable thing, but there were three witnesses, including myself. Ghosts, mystical statues, and creepy guards. Lots of strange things about this place.

And strange people. There was another man at the castle, Marco. He seemed to know me from when I was a child. He said I came to the castle with my father and Adam. I remember only bits and pieces, but I have to wonder at the remarkable coincidence. At first, Jake believed Nathan must have known about the castle and sent me there on purpose, but I don’t think so. Although Nathan is hiding things. Something is strange about him. He has these episodes that are brought on by a surge of adrenaline. He’s almost inhumanly strong and fast, and, most bizarre, his eyes glow as if on fire. It was terrifying, but impressive, watching him fight the Reaper’s men who attacked us at the castle. Fergus and Marco fought as well. Marco was shot trying to protect me and was in a coma until yesterday. He still spends most of his time sleeping but should recover. Nathan has the spear now. He hasn’t told us where he’s keeping it, and I suspect he won’t. We still have to figure out what to do with the treasure hidden at the castle. Too many people know about the place.

One of the threats is a woman named Brandi who’s trying to destroy the relics and the Reaper because he killed her family. Her brother was the last to die. He had been working undercover for the Reaper, while trying to find out his true identity. Edward killed her brother, but Brandi still blamed the Reaper. She’s more desperate now. I expect we haven’t seen the last of her.

I don’t know how much longer we can wait for Marco to recover enough to tell us what to do with the treasure. I’m sure the
Reaper still wants it, as well as the Spear of Destiny and the other three relics that the Protettori are protecting. We have to find them before the Reaper does. And I need to find out why Marco keeps mentioning Adam. I have begun to believe that either Nathan or Jake could be him, but I haven’t found enough evidence yet.

Kendall closed the log and put it aside. With a yawn, she turned off the light and lay down, staring at the blackness of the room. Was Marco just confused? He remembered Adam coming to the castle with her, but he had mentioned him as if he were still alive. There were other things troubling her. The Protettori’s crosses weren’t just necklaces; they were keys, but she was certain she was missing something. She tossed and turned well into the night. When morning came, she was gritty eyed and grumpy. She’d slept too long after a night of unrest and dreams. After a late breakfast, which Fergus had thoughtfully kept warm on the sideboard in the breakfast room, she stopped by Nathan’s office to ask for a closer look at the crosses. He wasn’t in.

Starstruck by Anne McAllister
Candice Hern by Once a Gentleman
Further Interpretations of Real-Life Events by Kevin Moffett
Save My Soul by Zoe Winters
In a Heartbeat by Dazieri, Sandrone
Deceptive Changes: Kat LaMond Book 1 by R A Baker
My Blood To Give by Paula Paradis
Out of My Later Years: The Scientist, Philosopher, and Man Portrayed Through His Own Words by Albert Einstein
Anna Jacobs by An Independent Woman
The Oxford Book of Victorian Ghost Stories by Michael Cox, R.A. Gilbert
Our partner