Read Four Divergent Stories: The Transfer, The Initiate, The Son, and The Traitor (Divergent Series) Online

Four Divergent Stories: The Transfer, The Initiate, The Son, and The Traitor (Divergent Series) 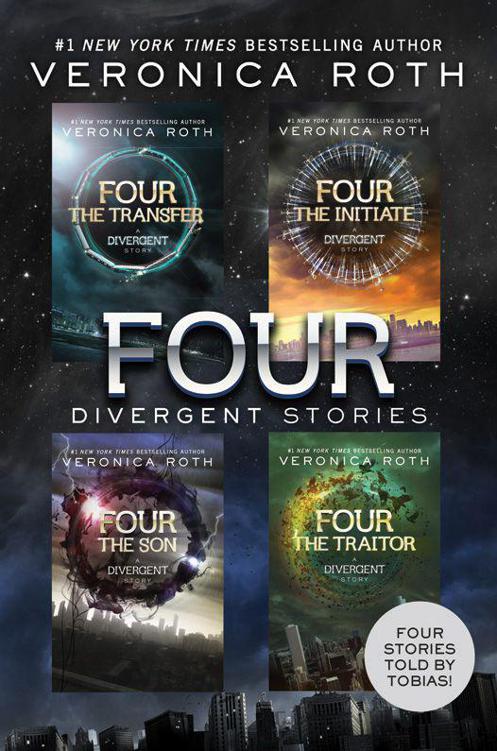 Four: The Transfer: A Divergent Story

Four: The Initiate: A Divergent Story

Four: The Son: A Divergent Story

Four: The Traitor: A Divergent Story

The Transfer: A Divergent Story

I
EMERGE FROM
the simulation with a yell. My lip stings, and when I take my hand away from it, there is blood on my fingertips. I must have bitten it during the test.

The Dauntless woman administering my aptitude test—Tori, she said her name was—gives me a strange look as she pulls her black hair back and ties it in a knot. Her arms are marked up and down with ink, flames and rays of light and hawk wings.

“When you were in the simulation . . . were you aware that it wasn’t real?” Tori says to me as she turns off the machine. She sounds and looks casual, but it’s a studied casualness, learned from years of practice. I know it when I see it. I always do.

Suddenly I’m aware of my own heartbeat. This is what my father said would happen. He told me that they would ask me if I was aware during the simulation, and he told me what to say when they did.

Tori studies me for a few seconds, then bites down on the ring in her lip before she says, “Congratulations. Your result was textbook Abnegation.”

I nod, but the word “Abnegation” feels like a noose wrapped around my throat.

“Aren’t you pleased?” she says.

“My faction members will be.”

“I didn’t ask about them, I asked about you.” Tori’s mouth and eyes turn down at the corners like they bear little weights. Like she’s sad about something. “This is a safe room. You can say whatever you want here.”

I knew what my choices in the aptitude test would add up to before I arrived at school this morning. I chose food over a weapon. I threw myself in the path of the dog to save the little girl. I knew that after I made those choices, the test would end and I would receive Abnegation as a result. And I don’t know that I would have made different choices if my father hadn’t coached me, hadn’t controlled every part of my aptitude test from afar. So what was I expecting? What faction did I want?

“I’m pleased,” I say firmly. I don’t care what she says—this isn’t a safe room. There are no safe rooms, no safe truths, no safe secrets to tell.

I can still feel the dog’s teeth closing around my arm, tearing my skin. I nod to Tori and start toward the door, but just before I leave, her hand closes around my elbow.

“You’re the one who has to live with your choice,” she says. “Everyone else will get over it, move on, no matter what you decide. But you never will.”

I open the door and walk out.

I return to the cafeteria and sit down at the Abnegation table, among the people who barely know me. My father doesn’t permit me to come to most community events. He claims that I’ll cause a disruption, that I’ll do something to hurt his reputation. I don’t care. I’m happier in my room, in the silent house, than surrounded by the deferential, apologetic Abnegation.

The consequence of my constant absence, though, is that the other Abnegation are wary of me, convinced there’s something wrong with me, that I’m ill or immoral or strange. Even those willing to nod at me in greeting don’t quite meet my eyes.

I sit with my hands clenching my knees, watching the other tables, while the other students finish their aptitude tests. The Erudite table is covered in reading material, but they aren’t all studying—they’re just making a show of it, trading conversation instead of ideas, their eyes snapping back to the words every time
they think someone’s watching them. The Candor are talking loudly, as always. The Amity are laughing, smiling, pulling food from their pockets and passing it around. The Dauntless are raucous and loud, slung over the tables and chairs, leaning on one another and poking one another and teasing.

Finally an Erudite woman enters the cafeteria and holds up a hand for silence. The Abnegation and Erudite quiet down right away, but it takes her shouting “Quiet!” for the Dauntless, Amity, and Candor to notice her.

“The aptitude tests are now finished,” she says. “Remember that you are not permitted to discuss your results with
anyone
, not even your friends or family. The Choosing Ceremony will be tomorrow at the Hub. Plan to arrive at least ten minutes before it begins. You are dismissed.”

Everyone rushes toward the doors except our table, where we wait for everyone else to leave before we even get to our feet. I know the path my fellow Abnegation will take out of here, down the hallway and out the front doors to the bus stop. They could be there for
over an hour letting other people get on in front of them. I don’t think I can bear any more of this silence.

Instead of following them, I slip out a side door and into an alley next to the school. I’ve taken this route before, but usually I creep along slowly, not wanting to be seen or heard. Today all I want to do is run.

I sprint to the end of the alley and into the empty street, leaping over a sinkhole in the pavement. My loose Abnegation jacket snaps in the wind, and I peel it from my shoulders, letting it trail behind me like a flag and then letting it go. I push the sleeves of my shirt up to my elbows as I run, slowing to a jog when my body can no longer stand the sprint. It feels like the entire city is rushing past me in a blur, the buildings blending together. I hear the slap of my shoes like the sound is separate from me.

Finally I have to stop, my muscles burning. I’m in the factionless wasteland that lies between the Abnegation sector and Erudite headquarters, Candor headquarters, and our common places. At every faction meeting, our leaders, usually speaking through my father, urge us not to be afraid of the factionless, to treat them like human beings instead of broken, lost creatures. But it
never occurred to me to be afraid of them.

I move to the sidewalk so I can look through the windows of the buildings. Most of the time all I see is old furniture, every room bare, bits of trash on the floor. When most of the city’s residents left—as they must have, since our current population doesn’t fill every building—they must not have left in a hurry, because the spaces they occupied are so clean. Nothing of interest remains.

When I pass one of the buildings on the corner, though, I see something inside. The room just beyond the window is as bare as any of the others I’ve walked by, but past the doorway inside I can see a single ember, a lit coal.

I frown and pause in front of the window to see if it will open. At first it won’t budge, and then I wiggle it back and forth, and it springs upward. I push my torso through first, and then my legs, toppling to the ground inside in a heap of limbs. My elbows sting as they scrape the floor.

The building smells like cooked food and smoke and sweat. I inch toward the ember, listening for voices that will warn me of a factionless presence here, but there’s only silence.

In the next room, the windows are blacked out by paint and dirt, but a little daylight makes it through them, so I can see that there are curled pallets scattered on the floor all over the room, and old cans with bits of dried food stuck inside them. In the center of the room is a small charcoal grill. Most of the coals are white, their fuel spent, but one is still lit, suggesting that whoever was here was here recently. And judging by the smell and the abundance of old cans and blankets, there were quite a few of them.

I was always taught that the factionless lived without community, isolated from one another. Now, looking at this place, I wonder why I ever believed it. What would be stopping them from forming groups, just like we have? It’s in our nature.

“What are you doing here?” a voice demands, and it travels through me like an electric shock. I wheel around and see a smudged, sallow-faced man in the next room, wiping his hands on a ragged towel.

“Oh.” The man tucks the corner of the towel into his back pocket. He wears black Candor pants, patched with blue Erudite fabric, and a gray Abnegation shirt, the
same as the one I’m wearing. He’s lean as a rail, but he looks strong. Strong enough to hurt me, but I don’t think he will.

“It’s my house,” he says with a cold smile. He’s missing one of his teeth. “I didn’t know I would be having guests, so I didn’t bother to tidy up.”

I look from him to the scattered cans. “You must toss and turn a lot, to require so many blankets.”

“Never met a Stiff who pried so much into other people’s business,” he says. He moves closer to me and frowns. “You look a little familiar.”

I know I can’t have met him before, not where I live, surrounded by identical houses in the most monotonous neighborhood in the city, surrounded by people in identical gray clothing with identical short hair. Then it occurs to me: hidden as my father tries to keep me, he’s still the leader of the council, one of the most prominent people in our city, and I still resemble him.

“I’m sorry to have bothered you,” I say in my best Abnegation voice. “I’ll be going now.”

I stiffen at her name. It’s been years since I heard it, because my father won’t speak it, won’t even acknowledge it if he hears it. To be connected to her again, even just in facial resemblance, feels strange, like putting on an old piece of clothing that doesn’t quite fit anymore.

“How did you know her?” He must have known her well, to see her in my face, which is paler than hers, the eyes blue instead of dark brown. Most people didn’t look closely enough to see all the things we had in common: our long fingers, our hooked noses, our straight, frowned eyebrows.