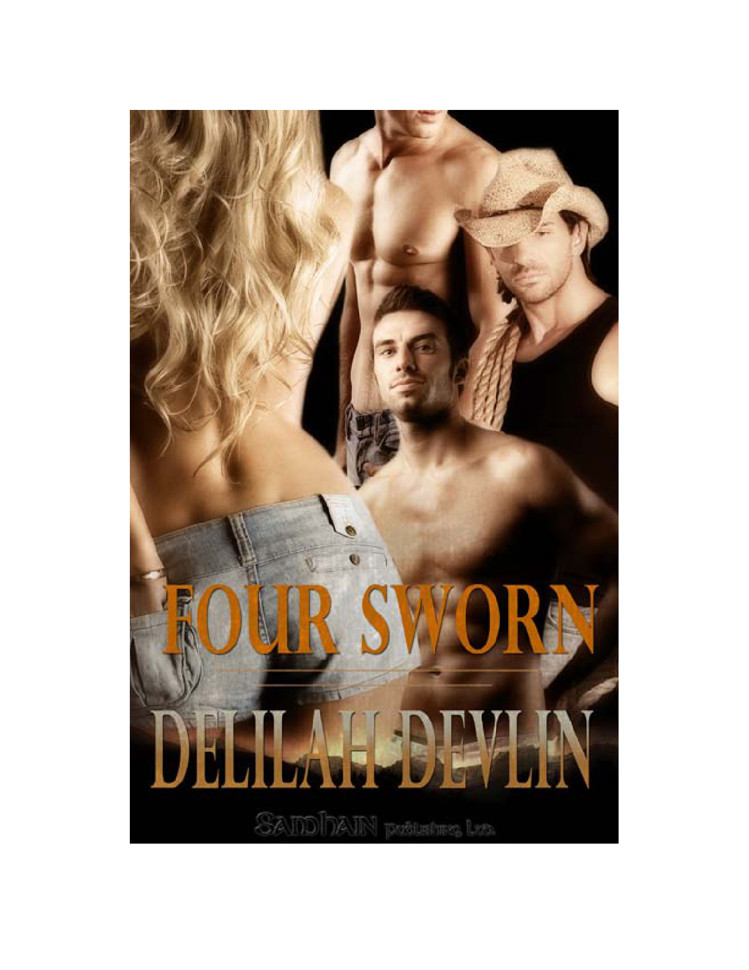 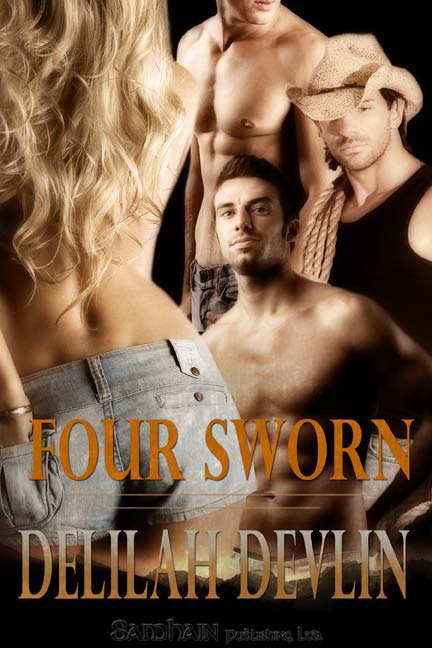 There’s a wild child trapped inside her, and they’re hell-bent on unleashing it…

As the pretty daughter of the town whore, Shanna Davies has always tried hard to toe the line. But she just can’t help it. Her boyfriend, Bo Crenshaw, has lured her untamed spirit out to play once too often. It’s time to get the hell out of Dodge and make a new start where no one knows her past. After she fulfills one last, wicked fantasy.

Shanna is Bo’s first everything. First kiss, first sexual playmate, first love. Yet he’s never managed to convince her that he accepts her—good girl and bad—just as she is. So, she wants a memorable send off?

No problem. He’ll give her one that’ll make her think twice about leaving.

On the appointed night, Shanna expects nerves. Yet once she crosses the threshold, the prospect of surrendering to a night of unrestrained passion with Bo
and
the three Kinzie brothers makes her mouth water—and her courage dry up.

But she asked for it, and now she’s not about to blink first in this game of sexual chicken…

Warning: Four lusty cowboys prove a little domination goes a long way in breaking a stubborn woman to saddle. Lots of spanking, binding, flogging, and double-dipping can keep a girl on her toes, her back, her belly, her knees…

To anyone who loves a tall, dark Texan, willing to go the extra mile for his girl…

“Dance with me, cowboy.”

Bo Crenshaw didn’t know what surprised him more. Her wanting to dance—or her asking him. She always cringed over her inability to master a simple two-step, and she usually avoided him like the plague in public.

But he wasn’t arguing. It was Friday night after a long week of wrangling cattle. He wanted to replace the musky smell in his nostrils with something a whole lot sweeter. Giving his drinking buddy a shrug, he let Shanna Davies tug his hand and lead him onto the dance floor, pretending a reluctance he didn’t feel.

Not that dancing with Shanna wasn’t pleasurable—if a little painful. She danced the same way she lived—a little too fast and completely out of synch with everyone around her.

She wrapped her arms around his neck, but her head was tilted as she peeked around his shoulder.

“Let’s go this way.” She bumped his knees, and they scooted backward toward her destination.

He pulled in her hips to slide a knee between her lethal knobs and circled so he had a view of what had caught her attention. Eyeing one particular trio of dancers at the far edge of the parquet floor, he thought he knew what had Shanna so intensely curious.

“Get me closer,” she hissed.

“
Them.
Oops.” She ducked her head and stared at his chest. “He knows I’m watchin’.”

“Who?” he asked, pretending confusion.

Bo leaned closer to whisper in her ear and bury his nose in her fragrant hair, feeling sure she’d allow it—seeing as how she was trying to pretend she wasn’t there to spy. “How do you know he knows?”

“He winked at me.” She lifted her head and gave him a glare.

Bo suppressed a grin. “You’re really curious about them.”

She slid her hand down to twist his nipple through his shirt, and he winced.

“Don’t make fun of me.” She blew out a deep breath, frustration turning down the corners of her mouth. “Most exciting thing to happen around these parts, a real
ménage à trois
, and I can’t get close enough to see.”

Bo chuckled, and then hissed when she twisted his nipple again. He’d be bruised. Worth it, though.

Shanna grimaced in dismay but her brown eyes glittered with humor. “Did I make it sound that way?

I’m sorry,” she said, her tone anything but apologetic. “It’s not that the sex isn’t great, but…”

He couldn’t help his impatient snort. “I know. You’re blowin’ this town as soon as you have the cash.” Bo turned around on the floor again, fighting her for the lead and winning. He danced them into the darkest corner of the dance floor. “Hell, see what you did now?” he grumbled, pushing her hand down to the front of his blue jeans.

She cupped his erection, running her palm up and down his length, and then tossed back her dark honey-colored curls. Her laughter was low and dirty. “Guess since it’s my fault, I should do something about it, shouldn’t I?”

“Promises, promises,” he muttered, acting like he wasn’t so excited his head and heart were pounding faster and heavier than the band. “You bring a purse?”

He dropped his arms and resisted the urge to snag her hand inside his. They walked out of the bar and into the gravel parking lot, making a beeline for his truck—but not before she’d darted a glance around the rows for the threesome’s vehicle.

When her shoulders sagged, Bo opened the cab door. “Hop up.”

As he climbed in behind the steering wheel, she raked a hand through her hair. “We don’t have to go far.”

“You in a hurry?” He turned the key and the engine rumbled to life, growling like he wanted to. He was pretty sure Shanna was right there with him by the way she clenched together her thighs.

He let a grin slide across his face. “Sweetheart, I know just the place.”

Bo gave Shanna a quick kiss then slid all the way inside her, sighing as her moist heat enveloped him.

Her legs wrapped around his hips and hugged him so hard he had to thrust a couple of times to remind her to give him a little room to move.

As he got down to work, his cock rocking inside her lava-hot little channel, he blessed his Boy Scout training for his foresight to stuff a thick blanket behind the seat of his truck. It gave him just enough padding beneath his knees to keep him comfortable and to shield Shanna’s back from the cooling metal.

“This workin’ for ya?” He tried to sound nonchalant when what he really wanted to do was let out a whoop it felt so good.

She gave him a coy look from beneath her lashes. “You needin’ a little praise?”

She lifted her head and scooped his mouth with hers, fluttering her tongue over his bottom lip until he growled and consumed her like a bear dipping into a honey jar. She giggled into his mouth, and he pulled back, making a face. Moonlight shone so bright he could see the gleeful humor digging dimples deep into her cheeks.

He frowned. “Do you know what it does to a man when he’s balls-deep and the girl starts laughin’?”

Which only made Shanna laugh harder. “Since you’re not wiltin’ beneath the disrespect, I’m not gonna feel sorry for you.”

Bo gave a rumbling groan and tunneled deeper into her slick heat, every inch of his dick surrounded by her gently rippling channel. They grew silent, their bodies straining together.

Then, “You don’t think what they’re doin’ is dirty, do ya?” she asked, her tone far too conversational, considering how much effort he was exuding.

He knew how her mind worked and what had precipitated this hot little interlude, but he still couldn’t resist the urge to tease. “Who?” he asked, stroking deeper and cupping her butt with his palms as he powered into her.

“Dani and her two fellas.”

“Long as they aren’t hurtin’ anyone else, I say let ’em be.”

“I’m envious as hell,” she groaned.

“Woman,” he growled. “How the hell can you hold a thought?”

“I’m a girl. My brains don’t flee south at the first sign of pussy.”

Bo’s bark of laughter ended in another groan. “Hush. Talk in a minute.”

“A little overconfident, aren’t you?” she quipped, but she was gasping now too.

Holding her against him, he rolled.

Shanna tossed back her wavy hair and gave him a look that bespoke challenge and arousal. A heady mix as she drove her slender body downward then ground against the crinkly curls at the base of his cock.

Up again, she went, moonlight gleaming on the sweat coating her small breasts.

When he’d been a teenager, he’d ogled the women in his daddy’s
Playboy
s, but he’d been hooked on Shanna’s little “fried eggs” since the first time she’d bared them in a dare. They’d still been middle school virgins.

“Now, don’t you tease me,” a thirteen-year-old Shanna had whispered, when he’d double-dared her into it, her hands shielding her chest after she’d let him pull her shirt up.

“Scout’s honor, I won’t,” he’d said, so hard and excited he’d have spent himself in his jeans if she’d so much as rubbed against him.

Even now, when her hands cupped her little breasts and her eyelids slid closed, he thought her breasts were just about perfect.

“Ever think about…” She bit her lip and ground down on his cock again, a little faster and harder, and he knew she was still thinking about the trio everyone in Two Mule, Texas couldn’t stop talking about.

“Ever think about what?”

Her gaze went skyward. “About doing it with another guy?”

His derisive snort brought her attention back. He gave her a scowl.

She snickered. “I didn’t mean it that way. I mean doing a girl with another guy.”

“Why stop at just two?” he asked, liking the conversation because he’d never seen her so hot, and moisture was seeping faster as she thought about her wicked little fantasy.

“Lord, Bo,” she moaned, swirling her hips, screwing him sweetly. “You shouldn’t say things like that.

My legs are shakin’.”

“Need me to take over?” he murmured.

“Would you? I know you’ve had a hard day at the ranch, but…”

“Honey, I’m never too tired for this. Not when it’s you.”

He could have kicked himself for that last bit. In all the years they’d snuck away to play, he’d never let her see how much she meant to him, sensing she’d shy away like a nervous filly, and he couldn’t have that. If all they ever had was this, this strange, sexy friendship, then he’d savor every minute.

He rolled with her again, his hands slipping beneath her ass to cup her close. “Now, do you think we might concentrate for just a second or two? And yeah, I’m bein’ overconfident again.”

She grinned and slid her hands down his belly, past where their bodies joined and cupped his balls.

Ep.#5 - "Rise of the Corinari" by Ryk Brown
Loving Leo (The Romanovsky Brothers Book 3) by Burns, Trevion
Phoenix Rising by Kaitlin Maitland
Final Confession by Wallace, Brian P., Geis, Gilbert, Lehane, Dennis, Crowley, Bill
Tryst with a Vampire by Bella Adams
Fiddlesticks by Beverly Lewis
Her Viking Wolves: 50 Loving States, Michigan by Theodora Taylor
Immortal Coil by Black, C. I.
The Man Without a Face: The Unlikely Rise of Vladimir Putin by Gessen, Masha
The Love of a Good Woman by Alice Munro
Our partner