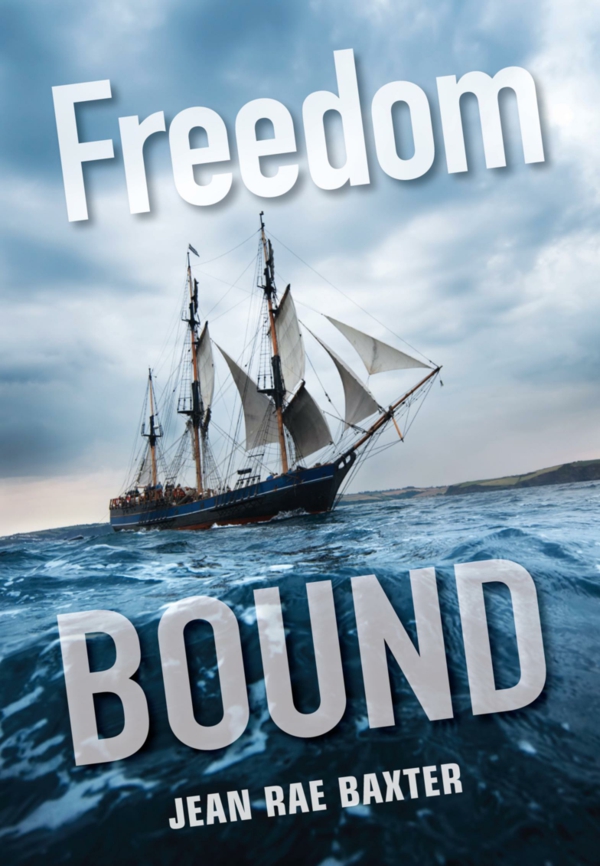 All rights reserved. No part of this publication may be reproduced, stored in a
retrieval system, or transmitted, in any form or by any means, without prior
written permission of the publisher, or, in Canada, in the case of photocopying
or other reprographic copying, a licence from Access Copyright (the Canadian
Copyright Licensing Agency). 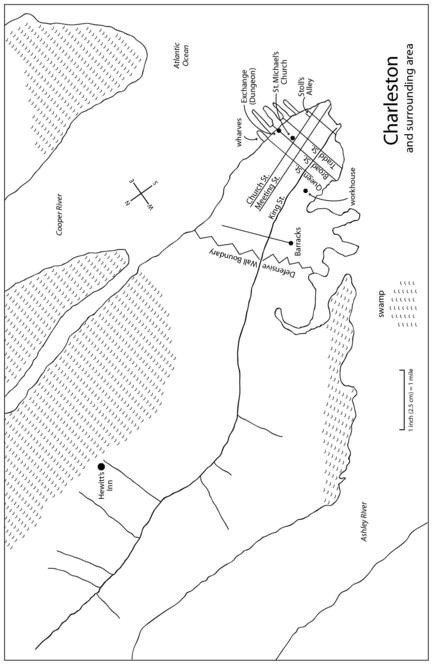 Charlotte stood at the bow, her eyes searching the wharves
as the
Blossom
entered Charleston Harbour. Around her, the
other passengers' voices mingled with the sounds of sailors
shouting, water lapping against the wooden hull, spars
creaking and gulls shrieking.

The harbour was clogged with ships. There were warships
of King George's Royal Navy, merchant ships, transport ships,
slave ships, and the hulks that held prisoners of war. Except
for the hulks, every ship carried guns. Even the
Blossom
, with
its twelve passengers and its cargo of tallow and hides, was
armed with twenty guns. What with French, Spanish and
rebel warships on the hunt for any vessel flying a British flag,
the seas were perilous all the way from Nova Scotia to the
Carolinas.

At Charlotte's side stood Mrs. Dickinson, the purser's wife.
The only other woman on board, she was short and sturdy,
with a red nose and cheeks roughened by sun and wind.

“Do you see him yet?” Mrs. Dickinson asked.

“Not yet. When we're closer, he'll be easy to spot. Nick's
very tall.”

But when the ship moored at its wharf and the sailors
were lowering the rope ladder over the side, Charlotte still
had not seen him.

“Even if I can't spot him in the crowd, he's sure to see me,”
said Charlotte. “I'll be the only woman climbing down the
ship's ladder, except for you.”

“Me! Merciful heavens! You won't catch me on that ladder
one more time than I can help! Climbing it to come aboard
was quite enough for me.”

“Don't you want to see Charleston?”

“No, thank you.” Mrs. Dickinson shook her head firmly.
“From what I hear, the streets swarm with refugees, cut-purses and runaway slaves. I've no wish to go ashore. My
only reason for going to sea is to be with my husband. If I
didn't, I'd never see him at all.”

“I know what that's like. Nick and I have been married
more than a year. In all that time, we've spent a total of
twenty-two days together.”

“At that rate, you can hardly call yourself married, if you
ask me.”

“There've been times I thought so, too. But everything's
about to change. After three years as a courier, Nick has been
attached to the Civilian Department of the Southern Command. He's been given a room of his own in the officers'
quarters, and I have come to Charleston to join him.”

Charlotte stepped away from the rail. “If you'll excuse me,
Mrs. Dickinson, I'm eager to go ashore.”

“My best wishes go with you!”

“Goodbye and thank you. It's been a comfort not to be
the only woman on the ship.”

Hurrying to the spot where sailors had lowered the rope
ladder, Charlotte was first in line when the gate in the rail
was opened.

“Careful there, young lady!” a sailor warned, holding out
his hand to offer help. But she was already over the side, her
foot reaching for the next rung down.

“That lass is fit for a life at sea,” another sailor laughed.

“I'd like to see her up in the rigging,” the first chortled,
“with those skirts blowing in the wind.”

She pretended not to hear.

Charlotte was eighteen years old. She had black hair, pink
cheeks, and lively brown eyes. For her arrival in Charleston,
she was wearing a blue cloak over a plum-coloured woollen
gownâher first new garments in four years. Nick had sent
five pounds sterling from his pay so that she could purchase
clothes in Quebec before embarking.

If she had been wearing breeches on the voyage and not a
long cloak and gown, she would have loved to climb up in
the rigging, where wind filled the sails, as far away as possible from her berth between the decks.

Charlotte thought that whoever gave the
Blossom
that
name must have had an odd sense of humour, for her quarters had reeked of pitch, bilge water, and human wasteâa
noxious stench that nearly turned her stomach. She had
heard rats skittering and squeaking, and sometimes she saw
one. Although it was cold on the Atlantic in winter, she had
spent almost every waking moment on deck. Even so, she felt
as if the stink of the ship would cling to her clothes forever.

As soon as she was standing on the wharf, Charlotte resumed her search for Nick, her mind refusing to accept what
her eyes told her.

A young officer stood a few yards away, his red coat and
white cross belts making him stand out from the crowd.
From under the brim of his tricorn peered a pair of eyes that
seemed fixed on her. She turned away, avoiding eye contact.
As she continued to look for Nick, she could not suppress
the rising fear that something had gone wrong.

When she happened to notice the young officer again, he
was still staring at her. The steadiness of his gaze forced the
truth upon her. Nick was not here. This stranger had come
to meet her. Their eyes met. She did not look away.

“Have I the honour of addressing Mrs. Charlotte Schyler?”

“I am Charlotte Schyler.” She held her breath, waiting.

“Captain Ralph Braemar, South Carolina Royalist Regi
ment, at your service. Nick asked me to meet you. He is
most unhappy not to be here.”

“Has something happened to him?”

“Then why . . . why isn't he here to meet me?” Her words
caught in her throat. She had travelled three weeks in a
stinking ship, enduring every kind of hardship cheerfully
because she believed that as soon as she stepped ashore,
Nick would be there to welcome her.

Captain Braemar looked around before he spoke, as if to
make certain that no one could overhear. “He's been ordered
to the backcountry.”

“You mean the army is still using him as a courier? I
thought that was finished. He wrote to me that he's now
attached to the Civilian Department.”

“He was. But the military needed someone to go into the
interior of South Carolina to gather information. We think
there's considerable support for the King, but with so much
persecution of Loyalists, hundreds have taken to the swamps
to hide. General Cornwallis needs to know how much active
support the army can expect. Nick has the skills to find that
out.”

Her voice shook. “Are you telling me that Nick is a spy?”

“Shh!” His voice sank to a whisper. “You could say that.
But you don't need to worry. If the rebels couldn't capture
him when he was a courier, they can't catch him now.”

“I suppose you're right.” She wanted to believe this. For
three years she had forced herself not to worry about Nick.
But she knew that a spy, like a courier, faced hanging if he
were captured.

“As soon as he received his orders, Nick wrote to warn
you not to come to Charleston. His letter went by ship to
Canada about six weeks ago. Since he knew it was unlikely
to reach you in time to stop you from setting out, he made
me promise to meet every ship. He didn't want you to arrive
and find no one waiting.”

She looked around at the dozens of wharves and the
dozens of ships at dockside or anchored in the harbour.

“You've met every single ship that arrived this winter?”

“Thank you, Captain Braemar. I am most grateful.”

“It was no more than friendship requires.” He bowed
again. “Now let's find your trunk. If we stand on the steps of
the Exchange, we can watch the wharfingers unload the ship.
They always start with the passengers' boxes. As soon as
those are on the wharf, I'll hire a man with a pushcart to
carry your trunk.” He offered Charlotte his arm.

“Is the Exchange that beautiful big building on the waterfront?” She took his arm. “It's so grand, I thought it must be
the Governor's palace.”

“No ma'am. The Exchange is our customhouse. It was
built for commerce and for important social events. Underneath there's a vault where we lock up political prisoners.”

“Yes. We call it the Provost Dungeon. It wasn't built to be
a dungeon, but that's what it's used for now. We don't have
enough room in the hulks to hold all the prisoners of war,
and the city jail has been turned into barracks for soldiers.
Charleston is an occupied city, you know, and we're at war.”

“Nick warned me that I wouldn't like everything I saw.”

“It's not so bad, really. You'll be comfortable in the officers' quarters. Nick is lucky they assigned him a room.”

When they had mounted the steps of the Exchange,
they stood watching as the wharfingers, manning a clumsy
wooden crane, unloaded an assortment of boxes and trunks
and sea chests onto the dock.

“I see my trunk,” she said after a few minutes.

“Wait here. I'll find a carter.” He walked down the steps,
leaving her waiting.

Charlotte pulled her cloak closer about her shoulders. She
felt a twinge of panic as Captain Braemar disappeared in the
crowd. What if something happened to him? Then what
would she do in this unfamiliar city where she didn't know
a soul?

The New Night Novels (Book 2): Revelations (A New Night Novella) by Hawley, Ashlei D.
Fig by Sarah Elizabeth Schantz
Harvest of Hearts by Laura Hilton
The Forgotten Affairs of Youth by Alexander Mccall Smith
The Oxford History of World Cinema by Geoffrey Nowell-Smith
In the Body of the World by Eve Ensler
The Runaway Countess by Amanda McCabe
An Affair Before Christmas by Eloisa James
Choices of the Heart by Daniels, Julia
Forstaken by Kerri Nelson
Our partner