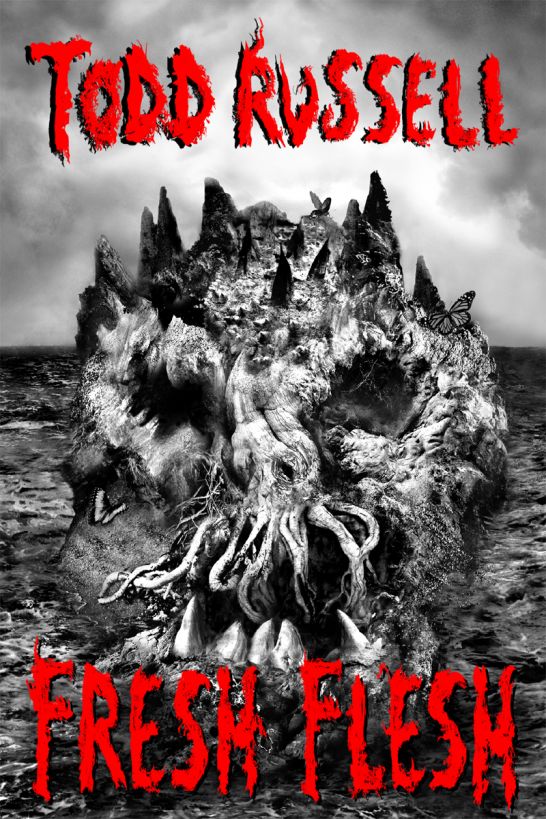 PUBLISHED BY:
Todd Russell at Smashwords

All rights reserved. Scream if you hate
reading these notices. This book is a work of fiction. Names,
characters, places and incidents either are the product of the
author's imagination or are used fictitiously, and any resemblance
to actual persons, living or dead or undead, business
establishments, cemeteries, freakishly unknown islands, events or
locales is coincidental.

The ocean surrounds the secret.

Last night a wicked storm swept a beautiful
sacrifice onto the shore.

Shipwrecked Jessica Stanton is about to be
discovered, cherished, and trained to survive on a remote island by
a man who is not what he seems.

There is a place on earth where unrestrained
evil flourishes.

Other books by Todd Russell

FOR
NANA AND PAPA
"Faith."

Two burly guards with poker faces strapped
him in the chair while a minister quoted psalms from an immaculate
white Bible. Richard Templin was nineteen years old and sentenced
to die on this day October 17, 1982.

The shackles tightened, tightened, snapped!
on his wrists. The metal shackles were cold, perhaps colder than
any one thing on earth. And, he nervously reminded himself, a
wonderful conductor of electricity.

He had been calm, only one nail chewed, until
they brought him into the room and put him in the chair. Then he
started sweating all over. Started fighting back tears.

SNAP! The shackles hugged his bare ankles.
They were even colder than the wrist shackles, turning his sweat to
ice.

His conscience mocked him:
Don't sweat
Rich ol' boy! Hold on! You sweat and you'll fry a helluva lot
quicker! 'Cuz you learned it in school, boy: water's one of the
BEST conductors!

They brought the heavy black leather strap
across his chest, tighter, tighter, tight—SNAP! He was buckled in,
ready for the roller coaster ride straight down.

Well,
almost
ready. The men had to
tape his eyes, the last task, so they wouldn't pop out and scare
the fifty or so "witnesses."
Ha, glad somebody gets to watch the
show, munch the popcorn, and make out when the lights go
down
.

The sound of the tape being ripped behind his
head sent the hairs on the back of his neck erect. It sounded like
what he imagined flesh to do when you tore it to pieces.

Oh God, footsteps! They're walking away!
Getting ready to turn on the juice and give me the ultimate spark!
Oh God its sooo dark! Please, please God turn on the lights make it
end, make it end, make it—

. . .Fading. . .STOP. The heels clicked to an
abrupt halt. He could almost see the expressionless guard next to
the switch, ready, awaiting the cue. Standing next to him, a tired
rich doctor with stethoscope like close friend dangling around his
neck.
Let's get this over with
, he's probably thinking,
I
have squash for two in an hour
.

The guard assured the doctor with a wink of
an eye.
Only take a minute, Doc—and a couple thousand volts!
Ah-ha-ha-HA!
Waiting.

Hours, days, years? It seemed he balanced at
the crest of the nightmare a long time before something
happened.

His body was wet as someone who had just
stepped out of the shower, his teeth chattered and bones
quivered.

This was not at all what he'd envisioned.
He'd expected it to be quick, merciful and painless. Something like
a trip through a fast food drive-thru.

The ripping sound came again. Fast, powerful,
driving down on his skull like a jackhammer. His head rocked, his
eyes closed to even deeper darkness.

Several seconds passed. He hoped this
fathomless black was not life after death. That there was a magical
place where angels flocked and devils mocked. That death was not
drowning, over and over, in a sea of black.

More seconds passed before he realized. .
.

He wondered for a moment about that Ambrose
Bierce story, the one where the guy who's about to be hanged
manages to escape, races toward his sweetheart's arms, only to find
that when he reaches her warm embrace he's actually dreamed it all
and is back at the gallows, hanging dead as beef on a meat
hook.

When Richard opened his eyes, there was a
face. No tape, no black, a face. The ripping sound had been the
tape. They were unshackling him.

The face was unfamiliar. An egg-shaped face
with a short clipped beard. The face held the only expression he'd
seen all morning.

The man looked as if he were about to smile,
but decided against it. "We have something better for you."

Something BETTER
, he thought, that has
to mean something worse. Because better in prison was a) you're
getting put on shit duty or b) you've been selected to get slipped
up the back door. However, Richard was beyond those fears now, he
only feared the electric chair. Besides, what could be worse than
frying until your balls fell off?

They led a shocked, confused Richard Templin
out of the execution room, the room that even his worst nightmares
couldn't top. And with loving, open arms something unspeakable took
his hand. . .

Something fresh
, the strange-looking,
salt-and-pepper bearded man in tattered clothes thought, fighting
his way through the damp, dripping ravine to meet the morning tide.
Last night, while the forces of Mother Nature descended upon the
helpless island like blood-thirsty vampires, and ear-piercing
screams echoed in the night, he dreamt of something fresh.
Something fresh, he was certain, awaited him on the naked
beach.

He made it to the clearing, his feet bleeding
through rotted tennis shoes, his heart pumping. He turned and fixed
on the setting behind him, sweat cascading down his bony cheeks,
believing that there was someone or something there. But there was
nothing. Nothing but his own trembling shadow in the creeping
sun.

At last he turned, prepared to see what he'd
only seen last night as a blur, a smoky haze, a shape entirely
formless.
Something fresh
, he thought, not knowing if he was
trembling in fear or anticipation.

At first he only saw the tide's usual
disappointments: tree limbs blown into the water from the other
side of the island, seaweed wrenched from the ocean floor, pebbles
and tiny and larger rocks of innumerable configurations. And then
he saw something else.

Something new and different.

Lying face-down in the sand, among a score of
torn, soggy driftwood, was the body of a woman.

He tore across the beach with sand irritating
the exposed flesh in his rotted tennis shoes trying to slow his
progress. Nothing could stop him.

He reached the woman and flung the driftwood
aside. He picked her up in his arms, turned her, cleared the sand
away from her face and felt for a pulse.

He felt her heart beating.

The strange man looked up at the scorching
sun and smiled for the first time in ages. It didn't occur to him
that the last time he'd smiled he had a full set of shimmering
pearly whites, where now he had a mouth full of black rot and
decay. Nevertheless, he smiled, and soon began to weep.

Five minutes later he carried the woman away
as carefully as a five-foot, six-inch fragile mirror.

At the same time he vanished into the trees,
something else washed ashore.

The pictures in her mind never completely
blacked out. She saw bits and pieces of her past strike out from a
cold dark tunnel. Memories with long skeletal-like fingers which
grabbed and tried to wash her spinning body down the tunnel. But
they let go. Somehow, as the black became an obvious destiny, the
skeletal fingers let go.

And she kept floating and spinning.

Through the crest of violent, hungry waves,
and bullet-hard raindrops fired from justice above. She
floated.

Until, at last, she landed—or dreamed she
had.

A place where dawn rose calmly and the lights
were brighter than a million connected floodlights. And the heinous
skeletal fingers, that had once held her, slithered away like
individual serpents, down the frigid tunnel. Her eyes never opened,
she never once regained consciousness, yet she knew it was
over.

Then there was gray. An image to let her know
she was still on the boundary between reality, fantasy, life and
death. The storm was not over.

A different set of fingers grasped her, warm
fingers from a bright place. She imagined hearing the soft melodic
strum of a twelve-string guitar playing somewhere deep in the
blinding white.

On the third day the gray metamorphosed into
shape, definition and color.

The third day her eyes opened and she took a
first glimpse of her unfortunate surroundings.

She dreamed the voice she heard was a
doctor's, but her eyes—open with toothpicks holding the lids—saw
differently. The man hovering over her was no doctor. He was as
scraggly as a common bum, a vagabond, a total loser who survived on
rat-like behavior. He had the unpleasant odor of dead fish, a
salty, dank scent. He had a beard (if that's what it was) which
looked as if it had never been shaven. His eyes were as worn and
bloodshot as the town drunk's. His skin color wasn't even normal.
It was gross, pale and thin. It bordered on translucent. She saw
herself waking from a deep sleep to a dying, disgusting, useless
bum.

"Who?" she forced through sun blistered lips,
her voice box not allowing anymore. She tried to turn away from the
man's anxious gaze, but her neck wouldn't cooperate.

"Please," he whispered, bringing something to
her mouth. "Please drink. You need fluids. You almost. . .didn't
make it."

She drank without objection. She doubted that
she had the strength to object. A warm, milky substance slid down
her parched throat.
Coconut?
She compared the taste to her
memory banks.
Yes, coconut milk.

The man pulled the coconut away from her
lips. "Are you hungry? You must be starved."

"I," she began, the jaws, this time, not
cooperating. He gave her another drink and she drained the coconut
dry.

The man took the coconut away again. He broke
off a piece of it and offered it to her. "Hungry?" He repeated, as
if she didn't understand English.

"Okay." He put the coconut on the ground
beside her. "But I must know how you feel? Please, if you feel
feverish or sick or cold—I must know. How do you feel?"

Teasing in Texas (At the Altar Book 10) by Osbourne,Kirsten
All Joy and No Fun: The Paradox of Modern Parenthood by Senior, Jennifer
Windswept by Anna Lowe
The Familiars by Adam Jay Epstein
Final Act by Dianne Yetman
La tía Julia y el escribidor by Mario Vargas Llosa
Not Your Ordinary Faerie Tale by Christine Warren
Possessed by Kira Saito
Kris by J. J. Ruscella, Joseph Kenny
Krisis (After the Cure Book 3) by Deirdre Gould
Our partner