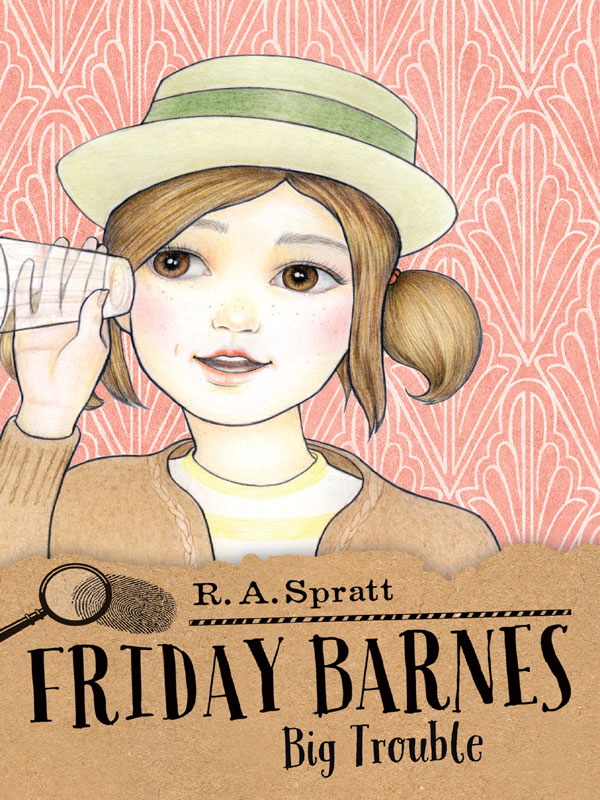 About the Book
Friday Barnes has a new case, and this time it's personal!

When Friday's father turns up out of the blue, he brings his daughter some distressing news â Friday's mother has been kidnapped! But who would want to kidnap a theoretical physicist?

The Headmaster needs Friday's help too, when Highcrest Academy is thrown into chaos by the arrival of a beautiful new student â Princess Ingrid of Norway. She's rich, she's royal and she's got her eye on Ian Wainscott. Despite heightened security at the school, things start to go missing. It appears Highcrest Academy has been infiltrated by a master thief, The Pimpernel.

Can Friday crack the case of her missing mother, reign in a royal brat and unmask the elusive Pimpernel? If it means she gets to ditch PE, then of course she can! Chapter 2: Inside the House

Chapter 16: The Case of the Missing Microwave

Chapter 18: The Case of the Voice in the Night

Chapter 20: What Happened Below

Chapter 21: The Framing of Dr Barnes

Nanny Piggins: Collect Them All!

Also by R. A. Spratt 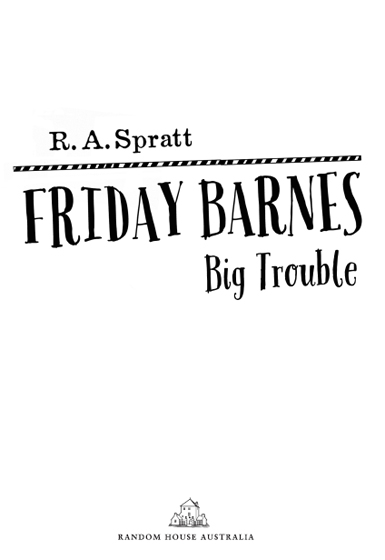 To Violet and Samantha

Friday Barnes was running as fast as she could across the Highcrest Academy campus, which admittedly wasn't too fast because running wasn't her strong suit. She had just heard the shocking news that her father had turned up and taken over a physics lesson, and she was desperate to get to that classroom to minimise whatever public embarrassment he was undoubtedly causing.

Friday's best friend Melanie Pelly ran with her,
and Ian Wainscott came along as well. He was either Friday's arch nemesis or her love interest. Nobody was quite sure which, least of all Ian and Friday. But wherever there was a dramatic public confrontation involving Friday he was always there.

When they burst through the door they saw the science teacher, Mr Davies, slumped at a desk, holding his head in his hands. All the students looked very brain-addled and confused. At the front of the room Friday's father, Dr Barnes, was scrawling equations over every last square inch of the whiteboard.

âYou see here, X is a photon or Z-boson, and here X and Y are two electroweak bosons such that the charge is conserved â¦' droned Dr Barnes. He had whiteboard marker and egg stains on his saggy brown cardigan, and it didn't look like his hair had been brushed at any time in the last decade.

Dr Barnes looked up and adjusted his glasses. âAh, Friday. Yes, that's why I'm here. I've come to see you.'

âThen why have you taken over Mr Davies' class?' asked Friday.

âI was looking for you when I walked past here,'
said Dr Barnes, âand I saw the lesson he was teaching. He clearly needed help. His explanation was childlike.'

Dr Barnes turned and looked at the class. He adjusted his glasses on his nose. âOh yes, I suppose so. I hadn't considered that.'

âThe family resemblance is remarkable,' said Ian. âIt's not just the brown cardigan. It's the total ignorance of social normality.'

âStow it,' said Friday, before going over to her father. âDad, why were you looking for me? You never have before. Not even the time you left me at the shopping centre, not realising that I wasn't in the car.'

âWhat?' said Dr Barnes. âI don't recall the data to which you're referring.'

Friday sighed. âOf course you don't. Just tell me, why are you here?'

âIsn't that you?' asked Melanie.

âShe's disappeared,' said Dr Barnes as he dissolved into sobs.

Friday took her father outside so he could compose himself. She sat him at a picnic table with a strategically placed box of tissues in front of him just in case he burst into tears again. Melanie and Ian stood by.

âWhat do you mean Mum's disappeared?' asked Friday. âShe can't have ceased to exist. She must be somewhere.'

âAll I know is yesterday morning while I was eating breakfast I looked up and noticed she wasn't at the table!' said Dr Barnes.

âThat is a bad sign,' said Friday then turned to explain to her friends. âMum never misses breakfast. She has an alarm set on her wristwatch to remind her when to eat.'

âWhen I reflected on the available evidence, I realised I had no memory of her sitting at the table for dinner the night before, either,' said Dr Barnes. âSo I investigated further and discovered she was nowhere in the house.'

âWow,' said Friday, âand you noticed this in under twenty-four hours? I'm impressed.'

âSo I rang her office at the university and she wasn't there either,' said Dr Barnes. âI'm worried that she's been kidnapped!'

âTheoretical physics has all sorts of practical applications,' said Dr Barnes. âShe might have been kidnapped by an arms manufacturer.'

âWhy? Do you think they arrested her?' asked Dr Barnes.

âI hadn't thought of that,' said Dr Barnes. âIs that the type of thing police do? I'd hate to trouble them if it's not their field.'

âI think your father is even vaguer than me,' said Melanie.

âDon't tell me you don't know the phone number for the emergency services,' said Friday.

âWhy?' asked Dr Barnes. âIs it my birthdate or something?'

âI'll call them,' said Friday. âThen we can meet the police at your house. They'll want to search for evidence before the trail goes cold.'

âIt's a figure of speech, Dad,' said Friday. âI'm not literally talking about a low-temperature footpath.'

It was a two-hour drive to the Barnes' family home. Melanie went along with Friday, supposedly for emotional support, but really so she could get out of classes for the rest of the day. Friday tried questioning Dr Barnes (her father) as he drove, but she had to give up because he was a terrible driver and it was
distracting him too much. He nearly drove into an oncoming ice-cream van while trying to remember what his wife had been wearing when he last saw her.

When they pulled up at the Barnes family's ordinary suburban home the police were already there. They had marked off the whole front yard with crime-scene tape.

âMother has gone missing,' Friday reminded him. âWe called the police about it two hours ago.'

âAnd they've done all this already?' said Dr Barnes. He was a university academic, so he was not used to anyone taking action with any degree of rapidity.

âCome on,' said Friday, âlet's talk to the officer in charge.'

They all got out of the car. Melanie and Dr Barnes hung back while Friday ducked under the tape and started walking towards the front door.

âStop right there!' snapped an angry-looking woman in a beige pantsuit. âIf you take one more step, I'll arrest you.'

Friday froze, one foot hovering over a paver.

âThis is a crime scene,' said the pantsuit woman. âWith every step you take you are contaminating the evidence.'

âThis is also my family home,' said Friday, âand the missing person is my mother. If you allow me to put my foot down and continue walking into the building, I will probably be able to assist the officer in charge.'

â
I
am the officer in charge,' said the pantsuit woman. âMy name is Detective Summers and my past experience with children is that they are anything but helpful.'

âWell, you could have my father come in and have a look around to see what is missing or misplaced,' said Friday. âBut he is a theoretical physicist, with tenure, so he is about as aware of his physical surrounds as a dead geranium.'

âAllow me to demonstrate,' said Friday, turning to her father, who was still on the other side of the tape. âDad, what day of the week is it?'

âDo you know what the day of the week it is?' repeated Friday.

âI suppose it's one of them,' said Dr Barnes. âI don't know â¦ It will say on the calendar, I presume.'

âCan you narrow it down?' asked Friday. âIf you concentrate really hard, can you work out whether it is a weekday or a weekend?'

âHow on earth can I be expected to know that?' asked Dr Barnes.

âYou just picked me up from school and classes were in session,' said Friday. âSo you should be able to deduce that it is a weekday.'

âThink hard, Dad,' urged Friday. âYou've been married for twenty-eight years. In all that time, have you ever looked at Mum and noticed what colour her eyes were?'

âBlue â¦ or maybe brown,' said Dr Barnes. âOne of those two colours, I should think.'

âThere must be an adult family member I can talk to,' said Detective Summers.

âYes, I do have four adult brothers and sisters,' said Friday. âQuantum, Quasar, Halley and Orion Barnes. You could get in touch with one of them.'

âOh no, you can't do that,' said Dr Barnes, shaking his head.

âI tried already. I couldn't get hold of any of them this morning,' said Dr Barnes. âNone of them answered the phone when I rang. That's why I had to go and get Friday.'

Friday was a little hurt. âI should have known I wouldn't be the first person you'd contact.'

âSo your four older children are missing as well?' asked Detective Summers. âAnd you didn't think to mention this before?'

Detective Summers looked like she wanted to slap Dr Barnes. She took a deep breath, then turned to Friday. âPerhaps you had better be the one to come inside.'

The Society for Useful Knowledge by Jonathan Lyons
50 Ways to Play by Debra and Don Macleod
Lord of the Black Isle by Elaine Coffman
WarlordUnarmed by Cynthia Sax
The Infernal City by Greg Keyes
Every Love Story Is a Ghost Story: A Life of David Foster Wallace by D. T. Max
Witch Hammer by M. J. Trow
Moonlight by Amanda Ashley
Whack 'n' Roll by Gail Oust
Finding Me by Mariah Dietz
Our partner