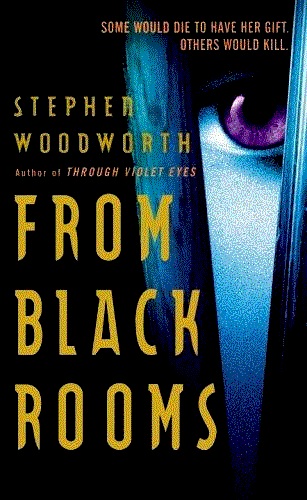 SUMMARY: Natalie Lindstrom has final y left the underworld behind for a new career in the art world. But there’s one world she can’t escape: the Other world of the dead. As a former Violet, an elite crime-fighter with the power to channel murder victims, Natalie is now using her paranormal gift to summon the spirits of legendary painters. But she’s about to discover how far some people wil go to keep their hold on her–and others like her…. Evan Markham, her ex-lover-turned-VioletKil er, has escaped from prison. And he’s been made an offer he can’t refuse: Natalie. But first he must help contact a deceased geneticist whose most intriguing experiment was brutal y interrupted: an attempt to manufacture Violets. To protect her young daughter and herself, Natalie must search for the scientist’s only living test subject–a handsome but tortured artist to whom she is dangerously attracted. For he is caught in the grip of two opposing forces, one that wants his survival, another that wants him–and anyone connected with him–destroyed….

This book is dedicated to the many close friends whose unswerving encouragement and support have sustained me throughout my writing career: David and Diana

and so many others.

Most of al , I owe this novel

to the best friend I could ever have,

Disease, insanity and death were the angels which
attended my cradle, and since then have followed me
throughout my life. I learned early about the misery and
dangers of life, and about the afterlife, about the eternal
punishment which awaited the children of sin in hell.

Al of the paintings described in this book are real artworks that were actual y stolen from the places mentioned and in the manner described. As yet, none of them have been returned, and no one knows who has them or where they are...

The Children of Dr. Wax

ON THE DAY BARTHOLOMEW WAX HAD

SELECTED TO KILL HIMSELF, HE cal ed in sick at

work to spend the entire day saying good-bye to his children. He would enjoy their company as he ate his last meal.

With the strains of a Vivaldi violin concerto issuing from the speakers of his home's built-in sound system, Wax uncorked his finest bottle of burgundy and

prepared himself a plate of brie, foie gras, cracked wheat and rye crackers, and fresh grapes. Once the wine had had a chance to breathe, he placed it on a sterlingsilver tray along with the platter of food and a cutcrystal goblet, and carried it from the kitchen to a door in the hal way. Setting the tray on the adjacent

mahogany side table, he punched in a seven-digit

combination on the door's digital keypad, and the carbon-steel bolts slid back into the jamb with the shuck of shel s pumped into a shotgun barrel.

Wax pul ed the door open, revealing the foot-thick depth of insulation and metal behind its wooden facade. The wal s of the basement had been similarly

reinforced. The plaster and drywal hid tungsten-carbide plates and sandwiched layers of concrete, steel, and Sheetrock, making the shelter impervious to fire, dril s, and explosives. The vault had cost his employers at the North American Afterlife Communications Corps a

couple mil ion dol ars to build, but no price was too great to pay for his children's safety.

They glowed in welcome as he descended the cel ar steps with the silver tray. Sensors detected his heat signature and switched on the lamps that il uminated his family. Warm yel ow light bloomed in patches in the darkness of the black-wal ed room. Basking in their individual spotlights, the children smiled at him--as precious to him as if he'd given birth to them himself. Wax had positioned the spots to light each canvas to best effect, precisely calibrating the intensity so as not to fade the colors. Although a blistering New Mexico heat broiled the exterior of the house, climate-control systems kept the cel ar at a constant seventy degrees, with just enough humidity to keep the paintings from cracking.

An office chair and a smal table in the center of the floor provided the chamber's only furnishings. As the vault door automatical y sealed him inside, Wax set the tray on the table, unwound the bread-bag twist-tie he'd used to hold back his hair, and shook out the ponytail until it fel down around his shoulders in a gray mane. Popping a grape in his mouth, he seated himself in the chair, which he could swivel to view the artwork

hanging on any of the cel ar wal s. There, with forced air and piped music swathing him in a cool swirl of Vivaldi strings, he spent his last hour with the only real family he had ever known.

As an only child, Bartholomew Wax had virtual y

grown up among paintings. His divorced mother

couldn't afford a babysitter during summer vacation, so every morning she would drop him off at the Isabel a Stewart Gardner Museum while she went to work the day shift at a Dunkin' Donuts shop in downtown

Boston. Back in the seventies, when parents were stil naive about pedophilia and when day care was

considered a luxury, Bartholomew's mother told herself that it would do the boy good to spend his days

surrounded by high culture rather than at home

A withdrawn and frail boy with an autistic's love of routine, little Barty came to cherish his hours in the dim gal eries of the Italian-style palazzo. The docents al knew him by name, and he would eat his sack lunch among the white lilies and Greco-Roman statuary in the peaceful courtyard, alone with his thoughts. But what he loved most were the paintings, each of which

remained exactly where Mrs. Gardner had decreed it should stay forever. Masterpieces of different sizes and themes jammed some wal s so closely that their frames butted against one another, resembling a patchwork of postage stamps on an enormous envelope. Each one

silently whispered its story, and when no one else was in the room, he would talk to each in turn, tel ing them al his secrets and his grand plans for the future. They were his family, after al .

Several members of that family now hung before him in this vault. Munching a cracker spread with brie, Wax basked in the delicate glow of The Concert--one of only thirty-five Vermeers in existence. The artist's muted use of light gave a preternatural tranquil ity to the scene of a seventeenth-century Dutch family

playing musical instruments; Wax could actual y hear the quiet harmony of the clavichord and guitar calming the frenzy of thoughts in his mind.

Next to the Vermeer, Storm on the Sea of Galilee

churned in an endless, frozen tempest. Rembrandt's only seascape, it depicted Jesus' disciples clinging to a sailboat that cresting white water threatened to overturn. Golden sunlight touched the wave-tossed boat as a hole of blue sky opened in the coal-smoke clouds, the

promise of God's salvation for the faithful. Now more than ever, Bartholomew Wax needed the possibility of peace and redemption.

His meal finished, he rose from his chair and strol ed past the remainder of his col ection, sipping wine from his goblet. Here were the other siblings from the Gardner--a tiny Rembrandt self-portrait, Chez Tortoni by Manet, La Sortie de Pesage by Degas, and more. Alas, those barbarians from the Corps had savagely cut the pictures from their frames, and Wax himself had had to remount the canvases on stretchers and find suitable replacement frames. He also made sure that the NAACC took greater care the next time they procured children for him to adopt.

Wax had always dreamed of having such a family.

Reproductions would not do, for even the finest

lithographs could not capture the play of light upon the actual brushwork, the depth and textures of the swirls and ridges, the translucence of the glazes. As a boy, he decided that he would have to become very rich so that he, too, could buy a mansion ful of artworks like Mrs. Gardner's. His need for money drove him into

medicine, for weren't al doctors wel -to-do? Yet as he matured and learned more about the rarified world of art auctions, Wax discovered that even works painted by the artists after their deaths--the posthumous

"col aborations" created by the government's violeteyed conduits for the dead--sold for mil ions of dol ars each. And these were not the works he wanted. He

considered starting his own biotechnology company to make his fortune in the stock market, but soon realized that even the wealth of Bil Gates could not purchase the works he truly wanted--the priceless treasures that hung in the Gardner and other museums around the

world. And that was when he made his bargain with the North American Afterlife Communications Corps,