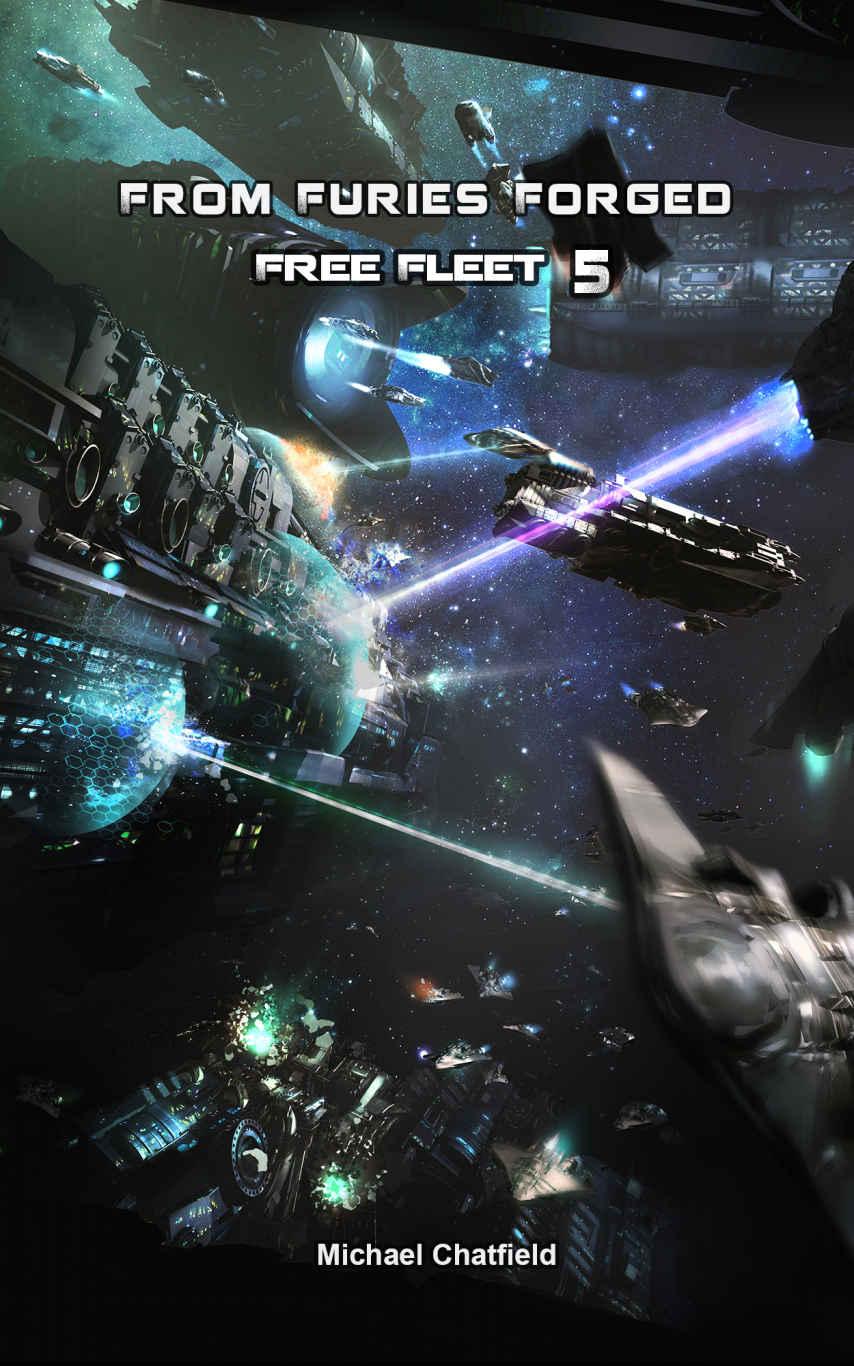 Chapter To the front

Chapter The more things change, the more they stay the same

Chapter Let's see if it works for the second time

Chapter Beware the wrath of the patient

Chapter It starts with Eltar

Chapter Power those reactors, charge those rail cannons and ready the fighters

Chapter Just when you thought Salchar was crazy

Chapter An army runs on men, a military runs on supplies

Chapter victory comes at a cost

Chapter Farmers know how to shoot too

Chapter We settle this in the dust

Chapter Well isn’t this a mess

As the Universe of the Free Fleet has grown, a star map has been created. Thank you Paul for turning my scribbles into a true map follow the Free Fleet’s journey with the accompanying map at
http://michaelchatfield.com/books/free-fleet-series-map/

Thank you for reading and I hope you have a great adventure with the Free Fleet!

Bregend looked as if he should be operating a Heavily Armed Powered Armor, not commanding the newly finished carrier Dal. He was a massive man, even among the genetically enhanced Avarians and creatures of the Free Fleet.

He looked over his three deck bridge. In front of his chair there were banks of consoles whose purpose was to relay the fleet's status back to him. The decks ringed the room, the first deck and lowest worked to keep the carrier running, the U-shaped projection inside of their ring housed the command team who took the information from the lower decks and spat it up to Bregend. The second deck was about the same height as Bregend's platform that he shared with Mills, his second-in-command. The third floor was dedicated to the controllers that coordinated not only the fighters of the carrier, but all the attached fighters to the fleet. Ramps from the second floor ran down and up to the other floors.

His elevated seat meant that he only had to slightly incline his head to look from the third deck to the first. People worked their stations while others moved around the bridge with deliberate haste.

“Generators are at ninety-five percent,” Rous, Bregend's Engineer since he had first stepped onto his first command, the battle cruiser Rebirth, said in his ear.

Since joining rebirth's original crew Rous' had gained fresh scars and burns, plus a prosthetic upper arm. He'd pulled more than one damned miracle out of his hide. Keeping the Rebirth together long enough for Bregend to get his message to Cheerleader was just one of them.

“Commander,” Rous said. His Kuruvian voice made it difficult to tell his emotions, but Bregend knew his chief engineer was proud. He had taken over the Carrier's engineering crew just a week and a half ago. About the time Bregend had dropped this particular plan into their laps. They'd run with it and done their chief and Bregend proud. They were a credit to the Free Fleet training schools they had come from.

Salchar had issued orders with Dal's transfer Ship Commander to give control over to Bregend as soon as possible.

Bregend had felt that the crew might be a bit pissed at how their Ship Commander was being pushed, yet there was little of that sentiment.

Bregend had proved himself to be a worthy fleet commander. Any grumblings about how he had been accelerated through the ranks died quickly. That was evident with the Star-destroyer yards that now lay between Groshum and Jafka.

“Commander,” Hazvar said tapping his paw to his head in salute.

“Bregend, please,” Bregend said, waving the title away and him to a seat in front of his desk.

“Bregend then,” the Chaleelian said, amused as he took his seat.

"How do you feel about the carrier Dal?" Bregend asked.

“At this moment, I am out of my depth with Dal. Thankfully my command team has been picking up the slack and helping me as much as possible. Though it's not fair on the people that know their jobs to have uneducated and the unbloodied in command.” Hazvar's amusement disappeared in the seriousness of his stare.

“You were involved with the conflict on Chaleel, proved your mettle with the defense of Parnmal. You also have a damned good record of looking after your crew while patrolling the trading routes. If you don't feel comfortable in your position, I have no doubt that you will quickly get a handle on it. Rick and his staff are not in the job of putting unqualified people into positions,” Bregend said. Hazvar seemed to be proud of his accomplishments, and he liked to be recognized for them.

“That said, if you want more time to grow, I can't fault that. You know yourself better than anyone else at the end of the day.” Bregend's eyes were soft and confident. “I would be lying if I said I didn't want to get my hands on Dal,” Bregend grinned.

“She is a good ship sir, and her crew are even better,” Hazvar smiled, something like regret colouring his voice. His features hardened as he looked to Bregend. “She's your command sir, as much as I would like to find the ropes with her, well we're out in the middle of Kalu territory. Me finding the ropes could get more people killed.” Hazvar's face had the hard lines of veteran eyes, the two met one another in understanding.

“Very well commander. Though I'd suggest that you start looking over the plans for the Henry-classed Destroyers. I'm going to need commanders in boatloads to crew those ships,” Bregend said while standing and pressing a few commands on his desk as he transmitted the file to Hazvar.

“You'll have them commander.” Hazvar extended his hand.

Bregend took it, a gleam in his eye.

“Now, I also have a bottle of Dovarkian rum. I've always found the best way to get to know my commanders was with a drink, rather than an interrogation.”

“Well I must bow before the greater knowledge of my commander, and the finer selection of spirits,” Hazvar said, a similar gleam in his eye.

Hazvar was one of the forty or so ship Ship Commanders that was now under Bregend's direct command on this mission. Squadrons of ships were arriving everyday. The Kaluian Star-destroyer yard was their rally point. Ships wormholed between stars hiding in the lightyears of dark space avoiding Kalu detection.

Jump ships and their support ships operated independently moving from system to system. They supplied a constant stream of information of the Kalu. The Free Fleet had a better idea of what the Kalu were doing than the Union ever did.

Millions of Independent's, the Kalu that had been banished from their home worlds for their peaceful thinking. Now worked with the Free Fleet to upgrade the stolen star-destroyers and crew some of the marginally upgraded ships.

Free Fleet personnel were training them up to capitalize on Fleet tactics for when they engaged their brethren in open combat.

Bregend was in command of close to five million personnel. Just that number alone was staggering. Thankfully Min Hae, Silly and Felix, as well as every commander and leader was throwing in their weight, making things a lot more manageable.

Leaving me to see if some of the insane ideas that the Free Feet is famed for, work yet again.

“We are at one hundred percent charge,” Wilma said. She was another member of Bregend's command staff, that had transfered with him to Dal, keeping her position as helmswoman.

“Very well, carry out bombardment,” Bregend said, his deep voice rolling like a war drum as he stood there. His eyes were bleak, he kept his arms firmly locked behind his back.

“Payload is looking good,” Mills said from his place as second-in-command. Bregend's eyes were focused on the main screen, as scores of massive objects approached his formation. The bomb-pumped acceleration of the ships pushed them and their massive payloads through the ships to the rear of his fleet.

“Plot is looking good and clear,” Zov said, one of the newest additions to Bregend's command staff and navigator for the entire fleet. His voice semed to catch slightly.

If one of those objects hit his ships, then the light would be claiming some of its own today.

Bregend's jaw tightened as the ships and their payloads crossed through the fleet with terrifying speed.

“Accelerating ships are releasing. Bombardment is going ballistic,” Kyle reported, holding his headset and looking to Bregend who nodded in understanding.

The fleet's wormhole generators worked together, opening and holding the tunnel to another system.

There was just twelve more minutes that the fleet could keep that wormhole open.

The ships projectiles cleared the fleet's formations in droves. Their accelerating ships peeled out of the way of the wormhole as fast as their crew could take the massive gravities.

“Configurations are looking good,” Wilma reported as those projectiles dove through the wormhole's event horizon. If those stabilizers didn't work, then the objects would be destroyed by the wormhole. Never making it to their destination.

Bregend looked to the time, it had taken seven minutes for the whole event to take place.

“Last projectile is through,” Ourv said.

“Shutting down wormhole generators,” Wilma said, there were no cheers or shouts as everyone looked at the main screen with anticipation.

“Good work people. Kyle, how are we looking on our link with Commander Smith?”

“We're solid, currently listening to 'ride the lightning,” Kyle said soberly, the corners of his mouth twitching just
ever
so slightly.

Bregend stopped himself from rolling his eyes.

Now we just have to see if it worked, and hope that we're on goddamn target.
Bregend thought as lyrics from Metallica’s Ride the Lightning filled the bridge.