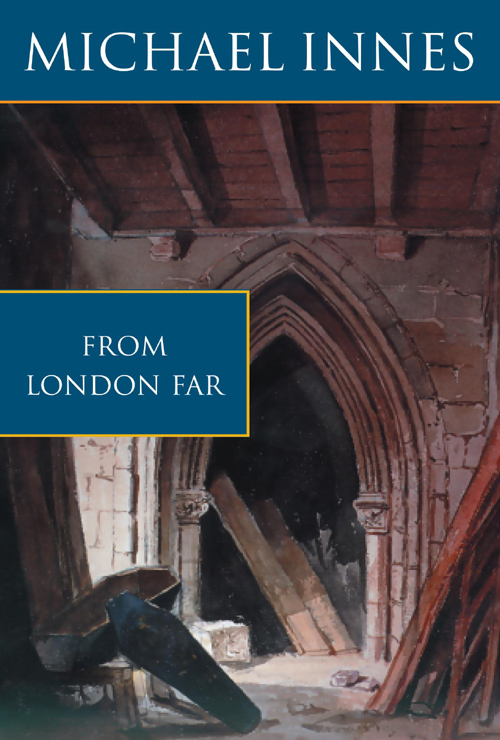 Resolved at length, from vice and
London
far,

To breathe in distant fields a purer air…

Meredith, had he ever discussed the affair afterwards, would have cited it as a singular instance of the operation of mere chance. That these precise words should have come to his lips just there and then was a freak of circumstance upon which all else turned; had they remained unspoken, the adventure would simply not have happened, numerous fates and fortunes would have been altogether different, and in time Mr Neff’s Collection might have come to outrival the Prado or the Louvre. There was matter for sober thought in this. And Meredith would murmur certain Greek verses to the effect that hard beside each other run the paths of night and day – meaning thereby that a man’s life is full of close shaves of which he is wholly unaware. The blade passes within a millimetre, but, because it is invisible, not a blink results.

If Meredith was reticent, Dr Higbed was communicative – and as his involvement had at one period been even more uncomfortable he was abundantly entitled to his say. That chance had in any significant sense entered into the inception of the affair his science constrained him to deny. He knew that when he himself whistled seemingly at random in his bath associations invariably substantial and frequently sinister unconsciously governed the choice of tune – so that after
Coming through the Rye
or
Rule, Britannia!
or
Old Man River
, for example, it was decent and expedient to avoid Mrs Higbed’s eye; whereas
Spanish Ladies
was a propitious prelude to such mild marital raptures as professional sexologists enjoy. Possessing this deeper insight into the springs of human action, Dr Higbed was not likely to admit that Meredith’s uttering the words he did was fortuitous. Here, he said, was but one little clank or rattle of the iron chain of Necessity, the endless running out of which into the abysm of Time constitutes the meaningless thunder men dignify with the name of History. But a greater point of interest lay in this: that the words uttered were in fact only an approximation to the words heard. What was said was odd enough, being the eccentric ejaculation of a discursively-minded professor. What was heard was so out of place that Meredith could by no possibility have uttered it – such impossibility being, of course, essential to the elementary safety of the system. And what had been forgotten by the contrivers of the system was a simple fact in psychology: that what we anxiously look for our eye will presently report with some confidence as seen, and what we are in earnest expectation of hearing our ear will sooner or later assert as uttered.

For all our waking lives – Dr Higbed, warming to his subject, would continue – we are hard at work imposing significance and form upon what comes to us as a mere phantasmagoria of sense; we cannot – and here Dr Higbed used one of those pleasing illustrations which had won him favour as a popular scientist – we cannot so much as squeeze closer to a pretty girl on a crowded bus without first constituting her both a girl and pretty through prodigies of creative exertion; likely enough, too, she is a plain Jill after all, since constantly we retort upon our senses with nudgings and wheedlings to give us what we want. And even – Dr Higbed would with increasing confidence pursue – to give us what we detest and fear, since so much of our unconscious life is a ceaseless striving after self-punishment. The neurotic sees as a lurid rash the tint and glow of healthy tissue. (Here Dr Higbed would stroll over to a mirror and view with some complacency his own radiant complexion.) The psychotic sees in the veins of hand and arm so many loathly worms burrowing to the bone. (Dr Higbed would bend back his palms and scan his wrists, assured of observing no signs of age in the blue lines which ran there.) Now, the fellow in Meredith’s tobacco shop was playing a dangerous game. Each time the thing happened it might mean a trap, with the gaff blown and the place surrounded. To this ending he would look forward with mingled fascination and dread. And from any one of a hundred men in the day the significant words might fall. It was all-important that he should hear
aright
, but this – such is the tortuousness of the human mind – made it all the likelier that he would hear
wrong
. So that when Meredith, meditating on the poetry of Samuel Johnson…

Thus Meredith himself sparely, and Higbed with his practised fluency, on the genesis of the affair. Meredith’s fateful words had been hardly more than reverie; he had not so much as intended a perceptible ripple upon the pond of casual talk; the result, nevertheless, was a veritable tornado for several unsuspecting people some thousands of miles away. This one might well call chance. On the other hand, the words were of a piece with the man; one of the major interests of his life echoed in them, however idly; and he often came out with things quite as odd. Here Higbed doubtless had the rights of the matter. But what has finally to be noted is neither chance nor fixed association. Rather, it is a fact of character. The paths of night and day sweep close together – but at their nearest a step remains to be taken. There is always a moment of decision, and it is through some assertion of the will that we either stay cautiously put or move from the old world to a new. So with Richard Meredith, a scholar in his fiftieth year. Suddenly a strange path opened – opened at the distance of one vigorous stride. Literally, it was like that; and literally – as if for further drama – it came in the shape of an unsuspected chasm at his feet. Meredith stepped forward and down.

It had been a good day. All morning pale autumn sunshine had filtered sparely into the great library, and the slowly moving shafts of light, like so many dial’s hands, added their subtle emphasis to the sense – always faintly present in this book-lined silence – of time flowing massively over the labours of generations of men. The particles of dust that floated in the slanting beams had crept from the pages of manuscripts and books perhaps unopened since they lay in the hands of Housman, of Headlam, of Jowett – nay, conceivably of Porson or Bentley. Such thoughts as these Meredith was far from formulating – he was too busy for that – but the raw material of them brushed the fringes of his mind and contributed to the austere pleasure which workers in such places know. And when at lunch-time the farthest-creeping shaft of golden light touched his high forehead crowned with its untidy hair – hair darker by some degrees than it was to be after Fate had called him to more than one unexpected shore – Meredith stretched himself momentarily in the warmth. ‘O Juvenal lord,’ he murmured happily with Chaucer, ‘O Juvenal lord, true is thy sentence.’ And disregarding faint promptings towards the Express Dairy in which he was accustomed to eat a frugal meal, he bent lower over the ancient monastic catalogue on the desk. Excitement was mounting in him – excitement controlled by increasingly severe logical scrutiny as the possibilities of important discovery increased. Might this pointer conceivably lead to the actual recension by Nicaeus to which a subscription in the Leyden Manuscript refers? Was there a possibility of its being indirectly connected with the
scholia
of Epicarpius? In speculations such as these, recondite but blameless, the afternoon wore away. And at four o’clock, having marked certain tentative conclusions beyond which it would be ill-advised to advance without an interval for consideration, Meredith packed up – an operation which consisted chiefly in locking the Duke of Nesfield’s manuscript securely in his dispatch-case. For this valuable document, which he had now finished collating, he proposed himself to take down to Nesfield Court on the following day and return to Mr Collins, the Duke’s librarian.