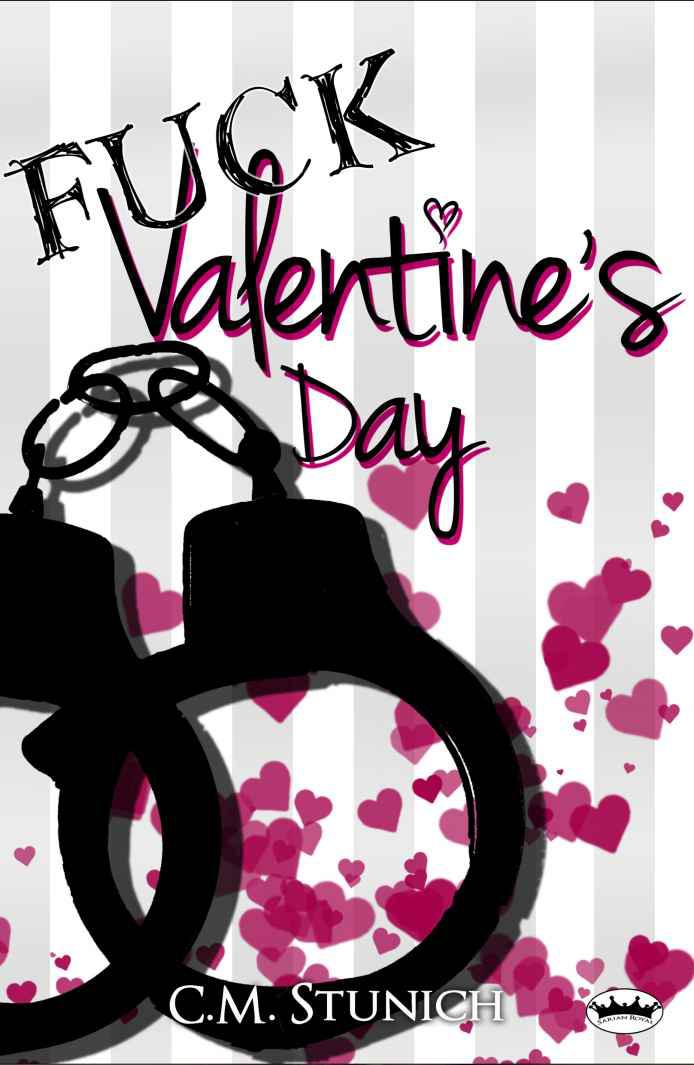 WARNING: This book contains handcuffs, hair pulling, perverted Valentine's cards, and all other sorts of naughty. This book is NOT intended for anyone who dislikes hot sex scenes, bad boys, or nerds with kinky sides. Read at your own risk.

All
rights reserved. No part
of this book may be used or reproduced in any manner whatsoever
without written permission except in the case of brief quotations
embodied in critical articles or reviews.

The
characters and events portrayed in this book are fictitious. Any
similarity to real persons, living or dead, businesses, or locales is
coincidental and is not intended by the author.

book with handcuffs on the front cover.

I heart the fuck out of you.

“
I'm
not going to touch your dick just because you gave me a box of
chocolates.” I handed the heart shaped box back to Quinn and
tried to step around him. When he put out his arm to stop me, I
rolled my eyes and crossed my arms over my chest. “It's not
even Valentine's Day yet,” I told him, totally confused as to
why a guy who'd never even spoken to me before was now suddenly
interested in providing me with presents.

The
campus Casanova was hitting on me.

The
question now, of course, was why. Why, after all this time, was he
suddenly interested? Was it because Valentine's Day was right around
the corner and he didn't have a date? Nah. I shook my head and
clutched the box of chocolates to my chest. Guys like Quinn didn't
give a shit about Valentine's Day. Besides, there were a hundred
girls that would throw themselves at his feet if he even bothered to
toss a glance their way.

With
a sigh, I continued down the hallway, convinced that men were a
different species altogether, one that I would never understand. I
was so busy thinking about Quinn and his sharp, blue eyes that I
ended up running into a big, broad,
delicious
chest. The
candy flew out of my hands, suspended in the air like a cluster of
chocolate rain drops and fell to the floor at my feet.

“
Sorry,”
I mumbled as I knelt down and started to scoop them up. I didn't
want to admit it, but I was kind of sad about my Quinn candy. It was
my only real hope of ever nibbling on anything that came from a boy
like him … Quinn Prentis. Sigh.
Waaaaay out of my
league, box of chocolate or no.

“
No,
it was my fault,” said a soft-spoken voice from above me. I
glanced up, and up, and up. It was Preston Ellis, the nerdy guy from
my calculus class. He was dressed in a hunter green sweater over a
white button up with a burgundy tie underneath. He had pretty eyes,
but they were hidden behind a pair of thick, black glasses. His face
was strong, masculine, all hard lines and edges.
Drool worthy.
“Please, accept my
apologies,” he whispered as he knelt down and used his notebook
to shovel the rest of the chocolates into the box top. “I'll
have to give you some later.” He looked over the top of his
glasses at me, brown eyes crinkling slightly around the edges
as he smiled. I was assuming he meant chocolates, but if he wanted
to give me something else later … I shook my head to clear
it.

“
Sorry,”
he said again as a group of giggling girls burst into the hallway and
split around us like a wave. “See you around.” Preston
ducked away to my left, head
down, books tucked under his arm and suddenly, I felt this sharp
pinch on my ass. I spun around, but there were so many blonde
haired, blue-eyed volleyball players that I was having a hard time
seeing who might have done it.

Oddly
enough, it never struck me that it might've been Preston Ellis.

I
trudged to my calc class, rubbing my ass and contemplating all the
reasons that Quinn Prentis might have decided to give
me
a box
of chocolates. We had a ton of classes together, but that didn't
mean he knew me. Hell, I didn't even think he knew
of
me. I
was sort of forgettable sometimes. I had legs for days sure (modesty
– not one of my traits), but my hair was long and brown and
boring. My eyes were moderately sized and my lips were flat.

“
Maybe
he thinks I'm an easy lay?” I said and unfortunately, the words
were not confined to the depths of my thick skull. That's right, I
said them
out loud.
I flushed a nice shade of pink, something
that would look real nice on a Valentine's Day card, and slipped into
the nearest seat before anyone could look up and see what idiot was
blathering their ridiculous thoughts for all the world to hear.

I
glanced around surreptitiously, trying to catch sight of either Quinn
or Preston. A little eye candy never hurt anyone after all.
Besides, if Quinn really was interested in me, wouldn't he be looking
for me, too? Then I found him and realized how stupid I was being.
My rational mind jumped in there with a nice, little quip.
This
is why we turned him down, Princess.
I told her to fuck
off as I watched Quinn hit on a pair of coeds in the back row.

“
Jackass,”
I mumbled and nearly exploded out of my skin when a warm hand brushed
against my arm. I glanced up and found Preston standing above me
with a stack of papers in his left hand. He was staring down at me
with this little smirk on his face that seemed at odds with the
sweater and the dorky glasses.

“
It's
kind of big,” he told me as his fingers flitted across my arm
and gave me goose bumps. “Do you think you can handle it?”
I stared at the hottest geek the world had ever seen and tried not
to gawp. And failed.
You are practically drooling, Andi, shut
your damn mouth.
It wasn't until a bit of saliva hit me in the
tits that I managed to get a hold of myself.

“
The
stack,” he said as he handed me a sheet of formulas. “It's
really heavy. Can you handle it?”

“
Oh.”
I took the papers from him and tried not to sound disappointed.
Damn it. I could've used a nice wet daydream to start the day off
right.
“Of course.” Preston winked at me and ran
one his big hands down his flat, sexy chest which looked damn good,
even in that ugly sweater, and turned away with a wink. Seconds
later, the papers (who were absolutely, one hundred percent out to
get me), slid from my hands and flitted across the floor in all
directions like a flock of birds.

Preston
paused and glanced back at me, dark brows raised skeptically.

“
Let
me get those,” he said as I climbed out of my seat and bent
down. Hilarity ensued and we ended up butting heads
hard.
Let's
just say Preston Ellis left that class with a bleeding forehead, and
I left with the world's bluest balls. Or ovaries? How does that
work? Aw, fuck it. You know what I meant.

I
headed to the store after class, drawn by a sale on Valentine's Day
candy and wine. Last year, I'd spent the stupid holiday alone. This
year probably wouldn't be any different. I mean, it's not like I was
desperate for a man or anything, it's just … it would be nice
to have a date on Valentine's Day for a change.

You
didn't have to be so rude to Quinn,
I told myself as I navigated
between necking couples whose osculating I could only handle so much
of.
He was just giving you chocolates. I mean, even if
all he really wanted was sex, why not give it to him?

I
tripped over the shoes of a man emerging from the
Personal
Hygiene
aisle and fell face
first into a bin of Valentine's Day pins. I almost screamed as I was
submerged in white buttons with red and pink hearts, but before I
could drown on Cupid kitsch, a strong hand was being wrapped around
my waist. The mystery man pulled me out and spun me around.

It
was Quinn. Again.

“
Hey
there, beautiful,” he said as he kept his arm wrapped around my
waist. “If I didn't know any better, I'd say you were stalking
me.” I raised my eyebrows at him and then my eyes caught on
his opposite hand, and what was clutched in it. A box of condoms.

“
Getting
ready for the big day already?” I asked him as I tried to
untangle myself. All the while, the skin on my lower back between my
shirt and jeans was tingling from the touch of Quinn's fingers. He
stepped back and raised his hands in surrender.

“
You
got me,” he said with a wink. “After all, I knew you'd
agree to come out with me eventually. Pick you up tomorrow maybe?”

“
Right,”
I said as I tried to walk away. Quinn stopped me with a hand on my
arm, drawing my eyes around to his. They were so bright in his tan
face, like two portals to the Caribbean. I could so vacation in
there.

“
You
sure you don't want to hang out with me tomorrow? I'd make it worth
your while.” I paused and gave Quinn a once over that started
at his red Mohawk and traveled all the way down to his bulging
biceps, tight T-shirt, and landed on the bump in the front of his
jeans. I wanted to say yes, but I was also ornery and had a bit of
an acidic tongue that my mother could never quite curb. I think I
was also allergic to being nice.

You Suck by Christopher Moore
Microserfs by Douglas Coupland
Cinderella in the Surf by Syms, Carly
Forging Divinity by Rowe, Andrew
Dark Mage (Avalon: Web of Magic, Book 11) by Rachel Roberts
Master of Whitestorm by Janny Wurts
I Love You Again by Kate Sweeney
The Haret (The Haret Series) by Daisy, Denise
Lockout by Maya Cross
Lila: A Novel by Marilynne Robinson
Our partner