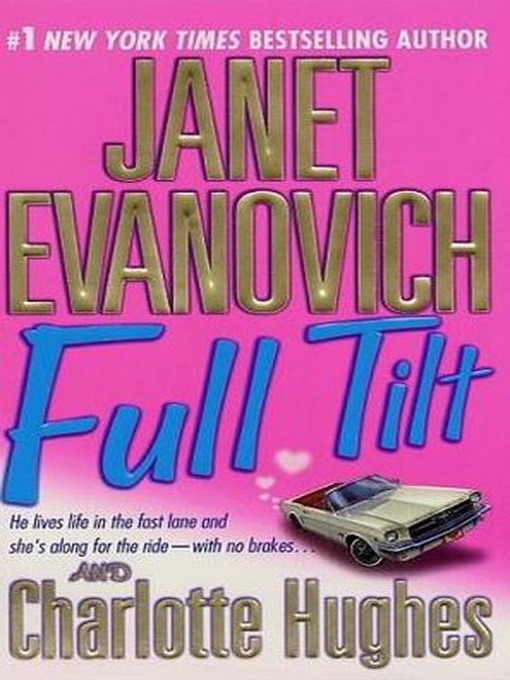 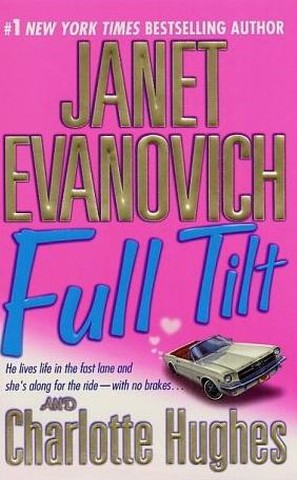 "Our relationship has grown stale."

"Shallow?" She gave a snort of disgust. "This coming from a man who was married to a gold digger named Bunny for three years? Now, there's a relationship with depth."

He grinned. "There's something to be said for gold diggers. A man always knows where he stands. In the end, both parties get what they want."

"And we both know you always get what you want. But let me remind you, Maximillian Holt, I'm the best thing that has ever happened to you. You need me. I listen to your problems, I feed that enormous ego of yours, and I can match wits with you any day. With both hands tied behind my back, I might add."

"Don't forget I made you what you are today, sweetheart. Without me you'd be nothing."

"And don't
you
forget, I'm the one who bails you out every time you get your ass in a sling. Speaking of which, you're out of fuel. You're running on fumes."

"How far to the nearest gas station?"

"You could have told me sooner."

Max guided the radically customized car down the narrow mountain road, taking each twist and turn with the precision of a professional driver. A Pink Floyd CD played from a cutting-edge sound system that would not be available to consumers for at least another year.

Max took a great deal of pride in his automobile, the same one his friends laughingly referred to as his Maxmobile. The car had been designed from the chassis up by former NASA scientists. The body and frame were composed of titanium and a newly identified polymer that offered the lightness of fiberglass and the durability of the strongest steel. The end result had resembled a Porsche, but Max's version was bigger, better, and could do things that car manufacturers would not find on their drawing boards for years to come. Nothing was indestructible, but the Maxmobile came close.

The dashboard was more complicated than the cockpit of a Learjet. A team of first-rate computer whizzes, hired away from top government contractors, had created the car's instrumentation using state-of-the-art equipment. Spread out among luxury automotive goodies like a tachometer, an altimeter, and a global positioning satellite system were a highly enhanced PDA, keyboard, a digital speech recognition module, a photo-quality printer, a fax, a satellite phone, an HDTV display screen, and a full video-conferencing suite, all operated by a high-powered computer that was smaller than an ashtray. Thanks to all these modifications, Max, if he wanted to, could run his vast business empire without ever getting out of his car.

Only a man like Max Holt would have laid out the kind of money it had taken to build such a machine; and only a man like Max would have created computer intelligence with voice recognition technology and a sassy personality to match. Just for the fun of it, he had named her Muffin and programmed her with a sexy voice that one employee claimed gave him a stiffie every time he heard it.

There were those who'd said it couldn't be done. Max had proved them wrong. He insisted on the best. He drove himself and his employees hard. If he exuded confidence it was because he always succeeded in what he set out to do. Always. Not a difficult task for a man with an off-the-charts IQ, and a business acumen that put fear in the hearts of his toughest competitors. He'd created two companies, simply to put a scare into AOL and Microsoft. The television network he'd purchased ten years ago had grown far beyond even his own imagination. He had recently sold all three companies for a king's ransom, simply because they no longer offered the challenges he craved.

The New York Times, Newsweek,
and
Money
magazine were clamoring for interviews, but Maximillian Holt did not give interviews. He maintained a low profile at all costs. Sure, photographers had grainy pictures of him slipping into buildings wearing expensive Italian suits, or ducking into stretch limos with a gorgeous model or actress on his arm, but he was clever at keeping his image out of the media. Most people wouldn't recognize him, even if they did know his name.

And that's the way Max liked it.

He had homes all over the world, but he preferred his horse farm in Virginia, not far from his cousin Nick who'd instilled in Max a love of horses. His farmhouse offered sanctuary from his hectic lifestyle, and he maintained his privacy with cameras, an alarm system he'd personally created, and enough security personnel to guard the White House.

People called him eccentric and egotistical, but Max had never cared what others thought. He made his own rules, especially when it came to women. He didn't like entanglements. Commitment was a four-letter word that spurred him to move on the minute a woman mentioned it. As a result, he had a reputation for being a ladies' man, but he was generous to a fault and did his best to end relationships on a positive note that often created close friends out of once intimate relationships. This included his ex-wife, Bunny, who, with his help, had launched a new line of bath and body products that competed heavily with the likes of Crabtree and Evelyn. Max liked to think women benefited from knowing him because he believed he was a better man from having been in their company.

"Speaking of women," Max said after a moment. "I want a complete printout on Jamie Swift. See if you can find a photo."

By the time Max stopped for gas and filled his tank, Muffin had a complete dossier and recent photo of Jamie Swift. "Not bad," he said. "You know how I like blondes."

Muffin gave a snort. "Not to mention brunettes and redheads. But you can forget this one, stud. She's engaged to one Phillip Ravenal Standish, a well-respected tax attorney, and the most eligible bachelor in Beaumont, South Carolina."

"Hands off. You're going to Beaumont because your sister Deedee needs you."

Max smiled. "Deedee needs more help than I'm capable of giving her. Besides, there's no sin in checking on my investment with the
Beaumont Gazette
while I'm in town. And having the pleasure of meeting Miss Swift. After all, I'm her partner."

"Silent
partner. And when she finds out Deedee asked you to help her financially

"Excuse me," Max said. "Is this a private conversation?" When the woman winced, he smiled. "I'll bet he's a rabbit and his name is Harvey."

Jamie was tempted to dive from her high heels and end it all right there. "How much did you hear?"

"Something about a guy named Phillip who's really late." Max cocked his head to one side. "He must not be very smart."

"Phillip is my fiance. And very late. Who are you?"

"Jamie Swift." She offered her hand.

He took it and they shook. "Nice to meet you, Miss Swift." Max reluctantly let go of her hand.

Jamie studied him. "You're not from around here, are you?"

Jamie wasn't surprised. She would have noticed him, what with those broad shoulders and olive complexion that was even more attractive against his white shirt. He did wonderful things to a tux. His face was striking, interesting to look at. She didn't know if it was the wine or the man, but one of them was making her light-headed. Be just her luck to do something stupid and swoon. And her engaged and all. That would certainly start tongues wagging in Beaumont.

"Nice to meet you, uh, Max." Dang, her voice suddenly sounded as though a bullfrog were giving birth in her throat. She cleared it. "Welcome to Beaumont."

"I came out for some fresh air. The view out here is great."

Jamie noticed he was staring at her and not the scenery. Smooth guy, she thought. Very smooth.

"So, is your fiance the jealous type? Should I disappear in case he shows up and finds you standing out here alone with a strange man?"

Jamie chuckled. "Maybe that's exactly what he deserves. I think he's beginning to take me for granted." She checked her wristwatch. "But he's more than an hour late. I seriously doubt he's going to make it at this point."

"I'll bet he has a very good reason."

But that's just me. I'm the sensitive type."

Jamie saw the teasing look in his eyes. "Yeah, right. The minute I laid eyes on you I said to myself, "Jamie, there stands one sensitive, touchy-feely guy."

Max grinned. "Could I get you another drink?"

"And I'll bet you never go over that limit, do you? I'll bet you've never once thrown caution to the wind and said, "Oh, what the hell, I'm going to slam down another tequila shooter whether anyone likes it or not."

Jamie nodded proudly. "In seventh grade I carved Davey Callaway's initials with mine and drew a heart around it."

Max pretended to look shocked. "I would never have thought it of you."

"I can be quite brazen at times."

"Oh, yeah? I'm beginning to hope your fiance doesn't show up after all."

Jamie realized the wine had gone straight to her head. She tried to pull herself together. "So, Mr., uh, Max. What do you think of our little town?"

"I've only been here a couple of hours so I haven't had a chance to see it."

"You should take a complete tour sometime when you have an extra ten minutes on your hands."

"It can't be that bad. What do people do for fun?"

"Mostly they go to church. Folks are big on church socials. You know, potluck dinners and all that. You want a good meal in this town you have to join a church. We have a theater we're very proud of, stadium seating and eight different movies from which to choose. Not to mention a skating rink and arcade for the kids."

"Yes, but what do the wilder, more sophisticated people like yourself do for fun?"

"We have a steak house and a seafood restaurant. Not to mention a hamburger joint where the onion rings are so greasy they almost slide off your plate. They insist on checking your cholesterol before you're allowed to order them."

"Oh, and we've got this roadhouse on the outskirts that serves the coldest beer in town and plays music on Friday night. The Baptists pretend it doesn't exist so everyone gets along just fine."

"And here I thought I'd seen and done it all," Max replied. "I'll bet you can tear up a dance floor."

Jamie's smile faded slightly. "I'm afraid I don't go out much. I own the newspaper so I spend most of my time there." Jamie realized she was enjoying talking to the man.

"I used to work for my cousin's newspaper," Max told her after a moment.

"You should try finding news in a town this size.
That's
the stressful part. Not much action around here, you know?"

Max chuckled. "Perhaps you could pay someone to commit a crime."

"I can't afford it," she confessed. "If you saw my circulation you'd laugh."

"I guess it's in my blood." She smiled. "Maybe I need a transfusion." She drained her glass. "So tell me something interesting about yourself. Anything. Something I can print."

He shrugged. "I'm afraid you'd find my life rather boring. I live on a farm in Virginia. My house is old and falling apart. I'm in the process of renovating it. When I have time," he added.