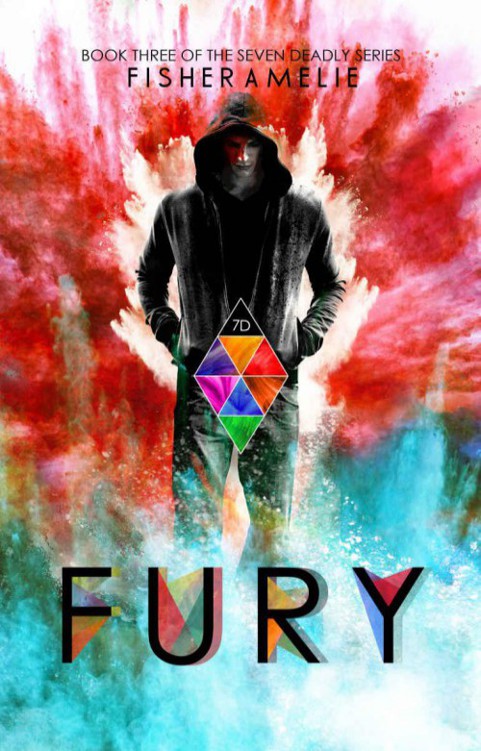 All rights reserved. Except as permitted under the U.S. Copyright Act of 1976, no part of this publication may be reproduced, distributed, or transmitted in any form or by any means, or stored in a database or retrieval system without the prior written permission of Fisher Amelie.

Anger is a consuming thing, a burning takeover.

It sets up shop in your heart and head and murders anything else attempting to make its way in. Life becomes obsessed with it, clouded with it, engrossed in it. You justify the feeling with delusions that you’re owed retribution. You condone thoughts and vengeful acts, feeding yourself with the idea that it’s warranted.

But that nourishment comes at a price. It costs you pieces of your soul, your love, your worth. You disregard your beliefs, your conscience. You adopt apathy like it’s salvation because you know in your heart of hearts that you would deteriorate into nothing without it. Because you don’t want to let it go. It makes you feel powerful, that anger. It makes you feel important. So you will let it eat you alive, consume every part of you until all that’s left is hollow revenge.

And when revenge is finally yours?

The fog will clear and all you’ll have gained from it is the insanity of guilt and the blood on your hands.

He faced me, the most furious, most livid expression in his eyes, and when he spoke, his voice dropped          menacingly.

“Spencer Blackwell, I warned you. I told you. Now I’m gonna get you...when you least expect it.”

He eerily turned from us and wordlessly walked to his truck. He got inside, started the engine, but before he drove off, he watched me.

His eyes promised a
furious
revenge.

Never take your own revenge, beloved, but leave room for the wrath of God, for it is written, “VENGEANCE IS MINE, I WILL REPAY.”
Romans 12:19

My chest burned with such intensity I could barely stomach it.

I glanced behind me. He was close. My eyes searched my surroundings. Pitch black and seemingly nowhere else to go. I caught sight of a small alley to my left about half a block ahead, ducked within it, and noticed piles of trash amassed against the edges of the buildings. The smell was atrocious, burning my nose.

I threw her onto the ground and tossed what I could over her.

“Don’t move,” I told her. “Don’t say a word. Don’t breathe.” I peered furiously over my shoulder. “And for the love of God, whatever you do, cover your ears and
don’t look
.”

Her eyes widened to an impossible breadth and she nodded. She obeyed me and faced the wall. I covered her face as best I could and waited.

My chest rose and fell violently. The rapid
thump, thump, thump
of my heart drummed frantically in my ears. Strapped to my sides rested two sharp blades I’d brought from home, the ones I’d always hunted with. I carefully unzipped my hoodie, crossed my arms, and palmed the knives’ handles.

“
Đến
đây
!”
I heard, making my pulse jump. My heart leapt into my throat. I crouched, bent my knees, readying for anything.

The speaker, the man chasing us, rushed around the edge of the building but came to a stop when he caught me standing. He smiled cruelly then spoke to me in Vietnamese, words I didn’t understand, and steadily made his way toward me. He stopped short once more. His head tilted to his right. His eyes narrowed.

“You messed up,” he said in English, realizing I hadn’t understood him before and made his way toward me once more.

I shook my head, my tongue too thick to speak.

He was big for a local. I suppose that’s why they hired him to do what he did, but no matter. I was taller and built better. I also had something he didn’t. I was trained to kill. Animals, yes, but to me he was just that. An animal.

My blood boiled in my veins and the anxious adrenaline was replaced with an absolute hatred, a fury so destructive it frightened me. My teeth gritted in my jaw and I reveled in the pressure.

I knew it the instant he’d made the decision, and all the breath I held whooshed from my lungs. A look of determination flitted across his face, and I could only smile, content in my malice. This visibly confused him, but he charged forward, regardless.

Two feet within striking distance, my short blades pealed with a beautiful ring, and it brought me such serenity. The gun strapped to his back was useless now and he knew it.

I plunged both blades into the sides of his ribs and his mouth opened in shock, his body leaning against mine in support. I held him up with the blades and bent into his ear.

“You messed up,” I said, stealing his words.

Blood curdled from his mouth and I removed my blades as he slid to the ground. I bent and wiped my knives on his jacket. His mouth opened and shut like a fish out of water, but I couldn’t conjure up any compassion for him. Instead, I stood over him and placed my boot over his heaving chest, pressing as much of my weight into him as possible.

“You will burn in fire so scorching you’ll beg for this moment over and over again.”

His last breath struggled from his lungs and his eyes went blank. I replaced my knives and kicked the corpse to the side, covering his body as much as I could with garbage. Hoping the smell would hide him and no one would find him for several days.

I turned back to her, fished her from her hiding place, and threw her over my shoulder. “Don’t look,” I ordered, and she nodded her head.

I heard a snap and the light cracked on, piercing through my closed lids. My head pounded and I groaned then rolled over, pulling my cover over my head to drown out the source of my pain.

“Get up,” a deep voice commanded. “Get up,” he continued, kicking my shoe.

He was silent for a moment so I pulled the cover down just enough to see his face. He was not amused.

“Ethan, watch your language, get your butt up, and find a job.” I didn’t answer him. I had nothing to say that would please him. “And while you’re at it, stop this ridiculous drinkin’, son.”

I sat up, ran my hands through my long black hair, and wrapped the length around my fist. I sat back against the wall, reveling in how cool it was, and tried not to vomit.

“Did you see them today?” I asked him, unable to help myself.

My dad removed his hat and leaned against the jamb, scrubbing his face with his free hand. “You like to torture yourself,” he said, shaking his head and sighing. “You remind me so much of your mama.”

The mere mention of my mother sent me spiraling down once more in depression. We’d lost her a few years before and I was still in agony. That, coupled with the fact that Spencer Blackwell stole my girl right out from underneath my nose, was enough for me to drink to excess every night.
I hate him
.

“Are they,” I swallowed, afraid of his answer, “are they together now?”

“Are they?” I asked again, letting my hand drop to my side. My hair slid with it and cascaded down my back.

“You are a stubborn boy. Yes, okay? Yes, they’re together. All the more reason to move on, son.”

My body suddenly weighed a thousand pounds and I felt my head reeling. So it was true. They were together and they would probably get married and I was going to have to sit there in that godforsaken small town and watch it all happen. I was going to get a front-row seat to my own misery.

I nodded once, rested my hands on my knees for a brief moment, then ran past my dad, shouldering him as I did so and nearly knocking him over before making it to the small bathroom across the hall and retching everything in my stomach into the toilet.

My dad stood in the bathroom doorway shaking his head in disappointment. When I was done, I fell back into the wall. That look shamed me to my core. Any time my dad felt let down, I felt the weight of my disgrace so heavy the only thing I could think to dull the ache was to drink myself into a stupor. It was a vicious cycle.

I let my hair cascade over my face. I heard the old wood floor creak beneath his feet as he left without another word and jumped when the front door slammed. My eyes closed as my head pounded.

The claw foot tub sat to my left so I leaned up and turned on the water, removing my clothing one piece at time. Each movement felt like a hammer slamming into my head.

I stepped underneath the warm water and stood in silence, letting the water absorb into my hair and seep into my skin. I breathed in the steam. I was miserable. Not just physically, but my heart was the heaviest it’d felt since my mom passed, and I had no one to blame but Spencer Blackwell for that.

The asshole who rode into my life under the guise of helping his sister only to yank what I thought was a stable foundation right out from underneath me. He stole from me, a bona fide thief, and I wanted to make him pay. No, I
needed
to make him pay.

I finished showering and threw a towel around my waist, stepping from the tub and toppling onto my bed when I reached my room and fell to sleep, not even bothering to dress myself. I fell quickly, fantasizing about my revenge.

I must have slept for hours because when I woke, it was pitch black outside. I rolled onto my side and checked my alarm clock. Eleven o’clock.
Perfect timing
, I thought.

I sat up and tucked my towel around my waist a little tighter, stood, and went straight for my dresser. I grabbed a pair of boxers and socks and put those on before heading for my closet and tossing on an old, worn pair of jeans, a thermal, and an old tee. I brushed my teeth, grabbed my wallet and keys, threw on my boots, and headed toward my piece-of-shit truck.

I knew exactly where I was going because it was where I planned on going every night until I forgot about Caroline Hunt.

Forever Freaky by Tom Upton
My First Love by Callie West
Calling the Play by Samantha Kane
Wild Is My Heart by Mason, Connie
In Her Name: The Last War by Hicks, Michael R.
This Wicked Gift by Courtney Milan
Alaskan Summer by Marilou Flinkman
Twincy Quinn and the Eye of Horus Part One by Odette C. Bell
Honey Red by Liz Crowe
Faces of Evil [4] Rage by Debra Webb
Our partner