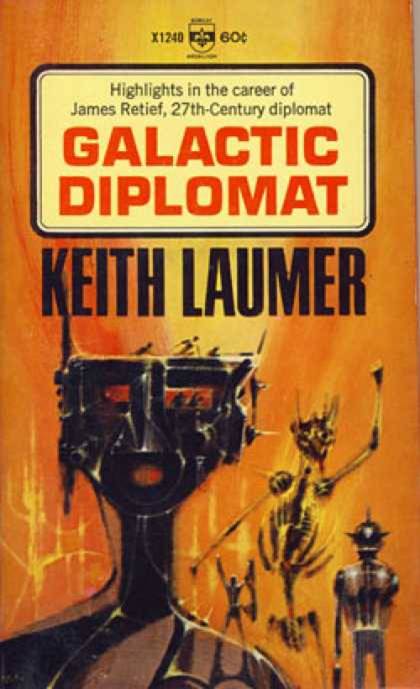 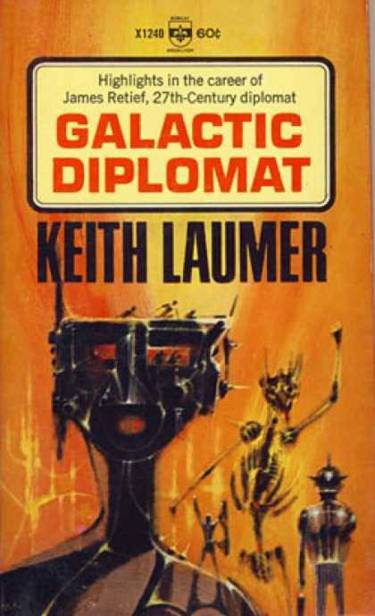 The Second in the Retief Series

Note:
All
of the stories from
this book were later included in Baen’s Retief! Collection.

THE CASTLE OF LIGHT

THE PRINCE AND THE PIRATE

“ . . . into
the chaotic Galactic political scene of the post-Concordiat era, the CDT
emerged to carry forward the ancient diplomatic tradition as a great
supranational organization dedicated to the contravention of war.
[1]
As
mediators of disputes among Terrestrial-settled worlds and advocates of
Terrestrial interests in contacts with alien cultures, Corps diplomats, trained
in the chanceries of innumerable defunct bureaucracies, displayed an
encyclopedic grasp of the nuances of Estra-Terrestrial mores as set against the
labyrinthine socio-politico-economic Galactic context. Ever-zealous in its
enforcement of peace, the Corps traditionally has functioned at its most
scintillating level under the threat of imminent annihilation. Facing
overwhelming forces at Roolit I, steely-eyed Ambassador Nitworth met the
challenge unflinchingly, coolly planning his
coup
. . .”

Ambassador
Nitworth glowered across his mirror-polished, nine-foot platinum desk at his
assembled staff.

“Gentlemen, are any of your familiar with a race known as the
Qornt?”

There was a moment of profound silence. Nitworth nodded
portentously.

“They were a warlike race, known in this sector back in
Corcordiat times—perhaps two hundred years ago. They vanished as suddenly as
they had appeared. There was no record of where they went.” He paused for
effect.

“They have now reappeared—occupying the inner planet of this
system!”

“Indeed, Mr. Magnan . . .” Nitworth smiled
icily. “It appears the Qornt do not share that opinion.” He plucked a heavy
parchment from a folder before him, harrumphed and read aloud:

HIS
SUPREME EXCELLENCY THE QORNT,
REGENT OF
QORNT, OVERLORD OF THE GALAC
TIC DESTINY, GREETS THE TERRES
TRIALS AND WITH REFERENCE TO THE PRES
ENCE
IN QORNT MANDATED TERRITORY OF TERRESTRIAL SQUATTERS, HAS THE HONOR TO ADVISE
THAT HE WILL REQUIRE THE USE OF HIS OUTER WORLD ON THE THIRTIETH DAY: THEN WILL
THE QUORT COME WITH STEEL AND FIRE, RECEIVE, TERRESTRIALS, RENEWED ASSURANCES
OF MY AWARENESS OF YOUR EXISTENCE, AND LET THOSE WHO DARE GIRD FOR THE CONTEST.

Nitworth tapped the paper with a finger.

“We have been served, gentlemen, with nothing less than an
ultimatum!”

“There
happens to be more to this piece of truculence than appears on the surface,”
the Ambassador cut in. He paused, waiting for interested frowns to settle into
place.

“Note, gentlemen, that these invaders have appeared in force
on Terrestrial-controlled soil—and without so much as a flicker from the
instruments of the Navigational Monitor Service!”

“We’re up against something new, gentlemen! I’ve considered
every hypothesis from cloaks of invisibility to time travel! The fact is—the
Qornt fleets are indetectible!”

The Military Attaché pulled at his lower lip. “In that case,
we can’t try conclusions with these fellows until we have an indetectible drive
of our own. I recommend a crash project; in the meantime—”

“I’ll have my boys start in to crack this thing,” Chief of
the Confidential Terrestrial Source Section spoke up. “I’ll fit out a couple of
volunteers with plastic beaks—”

“No cloak and dagger work, gentlemen! Long range policy will
be worked out by Deep-Think teams back at the Department. Our role will be a
holding action. Now, I want suggestions for a comprehensive, well-rounded, and
decisive course for meeting this threat. Any recommendations?”

The Political Officer placed his fingertips together. “What
about a stiff Note demanding an extra week’s time?”

“We don’t want to give them the idea we spook easily,” the
Military Attaché said. “Let’s delay the withdrawal—say, until tomorrow.”

“Well,
I see you’re of a mind with me,” Nitworth commented, nodding. “Our plan of
action is clear, but it remains to be implemented. We have a population of over
fifteen
million individuals to relocate.”
He eyed the Political Officer.
“I want five proposals for resettlement
on my desk by oh-eight-hundred hours tomorrow . . .” Nitworth
rapped out instructions; harried-looking staff members arose and hurried from
the room. Magnan eased toward the door.

“Where are you going, Magnan?” Nitworth snapped.

“Since
you’re so busy, I thought I’d just slip back down to Com Inq. It was a most
interesting orientation lecture, Mr. Secretary. Be sure to let us know how it
works out—”

“Kindly return to your chair,” Nitworth said coldly. “A
number of chores remain to be assigned. I think you need a little field
experience. I want you to get over to Roolit I and take a look at these Qornt
personally.”

“Not afraid of a few Qornt, are you, Magnan?”

“Afraid? Good lord, no, ha ha. It’s just that I’m afraid I
may lose my head and do something rash.”

“Nonsense! A diplomat is immune to heroic impulses. Take
Retief along. No dawdling now! I want you on the way in two hours. Notify the
transport pool at once.”

Magnan nodded unhappily and went out into the hall.

“Try to restrain Mr. Magnan from any impulsive moves—in any
direction.”

Retief and Magnan topped a ridge and looked down across a
slope of towering tree-shrubs and glossy violet-stemmed palms set among
flamboyant blossoms of yellow and red, reaching down to a strip of white beach
with the blue sea beyond.

“A delightful vista,” Magnan said, mopping at his face. “A
pity we couldn’t locate the Qornt. We’ll go back now and report—”

“I’m pretty sure the settlement is off to the right,” Retief
said. “Why don’t you head back for the boat, while I ease over and see what I
can observe.”

“Retief, we’re engaged in a serious mission. This is not a
time to think of sight-seeing.”

“I’d like to take a good look at what we’re giving away.”

“One might, at that. The Qornt have made their play—but I
think it might be valuable to take a look at their cards before we fold. If I’m
not back at the boat in an hour, lift without me.”

“You expect me to make my way back alone?”

“It’s directly down-slope—” Retief broke off, listening.
Magnan clutched at his arm. There was a sound of crackling foliage. Twenty feet
ahead, a leafy branch swung aside. An eight-foot biped stepped into view; long,
thin green-clad legs and back-bending knees moved in quick, bird-like steps. A
pair of immense black-lensed goggles covered staring eyes set among bushy green
hair above a great bone-white beak. The crest bobbed as the creature cocked its
head, listening.

Magnan gulped audibly. The Qornt froze, head tilted, beak
aimed directly at the spot where the Terrestrials stood in the deep shade of a
giant trunk.

“I’ll go for help,” Magnan squeaked. He whirled and took
three leaps into the brush; a second great green-clad figure rose up to block
his way. He spun, darted to the left. The first Qornt pounced, grappled Magnan
to its narrow chest. Magnan yelled, threshing and kicking, broke free,
turned—and collided with the nine-foot alien, coming in fast from the right.
All three went down in a tangle of limbs.

“Nice piece of work, Mr. Magnan,” Retief said. “You nailed
both of them.”

“Those, undoubtedly, are the most blood-thirsty, aggressive,
merciless countenances it has ever been my misfortune to encounter,” Magnan
said. “It hardly seems fair; eight feet tall AND faces like
that . . .”

The smaller of the two captive Qornt ran long, slender
fingers over a bony shin from which he had turned back the tight-fitting green
trousers.

“It’s not broken,” he whistled nasally in passable
Terrestrial, eyeing Magnan through the heavy goggles, now badly cracked. “Small
thanks to you.”

“Never mind us,” Retief said. “It’s you fellows we’d like to
talk about. How many of you are there?”

“Only Zubb and myself—”

“I mean altogether. How many Qornt?”

“That was merely an expression of amusement—”

“You find the situation amusing? I assure you, sir, you are
in perilous straits at the moment. I MAY fly into another rage, you know.”

“Please, restrain yourself. I was merely somewhat astonished—”
a small whistle escaped—“at being taken for a Qornt.”

“I? Great snail trails, no!” More stifled whistles of
amusement escaped the beaked face. “Both Zubb and I are Verpp. Naturalists, as
it happens.”

“Oh, not at all—except perhaps to a Terrestrial. The Qornt
are sturdily-built rascals, all over ten feet in height. And, of course, they
do nothing but quarrel. A drone caste, actually.”

“A caste? You mean they’re biologically the same as you—”

“Not at all! A Verpp wouldn’t think of fertilizing a Qornt.”