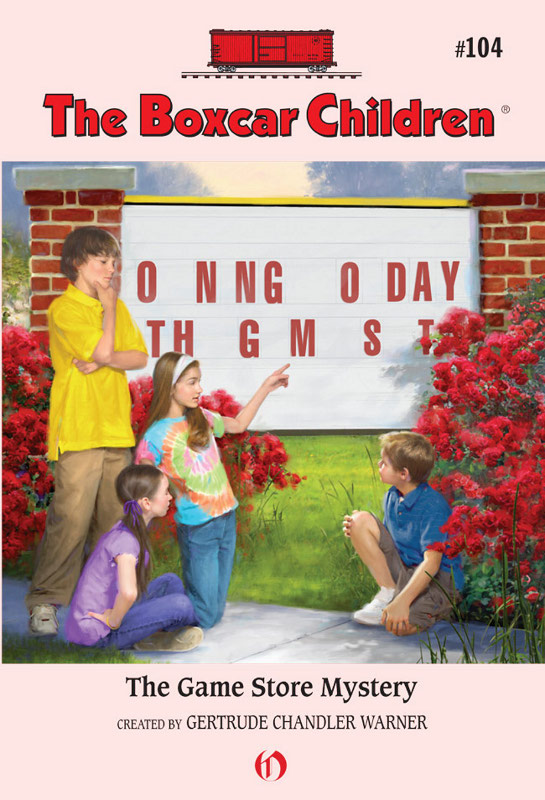 6 The Figure in the Night

“O_ _N_NG … _O_DAY,” six-year-old Benny Alden struggled to sound out the words on the sign in front of the newly built Crossroads Mall. “TH_ … G_M_ … S_ _T … ?” He scratched his head as Grandfather steered the van into the mall parking lot. “I don’t get it.”

“I think there are some letters missing on that sign, Benny.” Twelve-year-old Jessie smiled at her younger brother. “That’s why the words don’t make sense.”

“Oh.” Benny was already a pretty good reader, but he was trying to get even better. “What would the sign say if all the letters were there?”

Grandfather pulled into a parking spot right in front of the sign. Deep red roses bloomed all around it.

The children puzzled out the message a little longer. Finally, ten-year-old Violet spoke up. “I think it’s supposed to say ‘Opening Today. The Game Spot.’”

“Of course!” Fourteen-year-old Henry slapped his hand to his forehead. “Good job, Violet.”

The Game Spot was Queenie Polk’s store. Queenie was an old friend of their grandfather’s, and she had invited the Aldens to come down and see her new store today.

“I don’t know, kids,” Grandfather said as everyone hopped out of the van. “TH_ … G_M_ … S_ _T … must be the Game Spot. Those letters don’t fit the names of the other stores here. But I don’t think the Game Spot is opening yet today. Queenie said she had several last-minute details to take care of before she could open.” 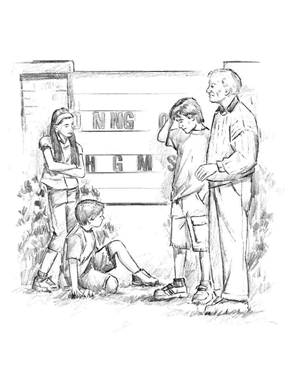 “And look. There’s a space after the O and before ‘day,’” Jessie pointed out. “That means there’s another letter after the O in that word.”

“So what else could the word be?” Benny asked.

Violet walked closer to the sign. “Let’s see … there’s an O in
Monday.
It could be
Monday.
”

“Is there an O in
Tuesday
?” Benny asked.

“No,” Henry replied. “And there isn’t one in
Wednesday, Thursday, Friday, Saturday
or
Sunday,
either.”

“Then I bet the sign is supposed to say: THE GAME SPOT. OPENING MONDAY!” Violet said triumphantly.

Grandfather smiled at them. “You children are good detectives.”

“Yes, we are,” Jessie agreed, thinking of all the mysteries she and her brothers and sister had solved. “But we’re also good at word games. Figuring out what this sign was supposed to say is really just a word game.”

“That’s true,” Grandfather said. “Queenie likes word games, too. You’ll have to see if she’s got any new games to recommend to you. Shall we go say hello to her?”

The door to the Game Spot was propped open with a folding chair that had a “Help Wanted” sign hanging from it. A man dressed in old jeans and a faded shirt was carefully etching the store hours into the glass window. The Aldens walked past him and went inside.

A radio played country music in the background. Several people bustled around stacking merchandise on shelves. The whole place smelled like fresh paint.

“Hey, look at this!” Benny made a bee-line for a model train that was set up in the window. “Doesn’t the third car look like our boxcar?”

“It does, Benny,” Violet said.

The children had actually lived in a boxcar for a short time after their parents died. They didn’t know their grandfather then. They were afraid he’d be mean. So instead of going to live with him, they ran away. They found an old boxcar in the woods and made it their home. But when Grandfather found them, they saw he wasn’t mean at all. He even moved the boxcar to their backyard so the children could still play in it.

“James Alden? Is that you?” A middle-aged woman who was no taller than Violet came down the aisle toward them. Her copper-colored hair was twisted into a bun and fastened at the nape of her neck. She had a big smile on her face.

“Queenie!” Grandfather moved toward the woman with his hand outstretched. “How are you?”

“Just fine,” Queenie replied as the grown-ups shook hands. “These must be your lovely grandchildren.”

“Yes. This is Henry, Jessie, Violet, and Benny.” Grandfather introduced them each in turn.

The children said hello and shook hands with Queenie.

“I’m happy to meet you all. What do you think of my new store?” She stepped back so the Aldens could take a good look around.

“It looks great,” Henry said, gazing at the wide aisles stocked with games, puzzles and hobby supplies. Off to the side was a small sitting area with tables and chairs. “It looks like you’re almost ready to open.”

“Almost,” Queenie agreed. She looked both excited and nervous at the same time. “Most of the inventory is out on the shelves. I’m still hoping to hire another employee or two. And of course, the building inspector still needs to come. But I should be able to open on Monday.”

“That’s what we thought,” Benny said. He told Queenie about the sign out front with the missing letters and how he and the others had figured out what the sign was supposed to say.

“Yes, I noticed that sign when I came in this morning,” Queenie said. “I already talked to George about it. He’s the person who owns this mall. He said he’d be out later today with some spare letters to fix that sign.”

“Hmph,” said a voice behind them.

The Aldens turned to see a man around Queenie’s age stocking shelves. He was tall and thin with dark hair that was graying at the temples.

“I wouldn’t count on George coming out today, Queenie,” the man said as he shifted some boxes on the shelf to make room for the boxes on the floor.

“He said he would,” Queenie said.

“That’s what he said the day you had trouble with those new pipes,” the man replied.

“Oh, Carter. Don’t be unpleasant. I’m sure George will come when he can. In the meantime, why don’t you say hello to the Aldens. James, this is my good friend, Carter Malone. He lends me a hand sometimes.”

“You, too,” Carter said as he stooped to pick up the boxes on the floor.

“Hey, what’s that game you’ve got there?” Jessie craned her neck to see the box top. “It looks like a word game.”

“Really?” Jessie said. “Could you show me how to play, Carter?”

“Nonsense,” Queenie waved her hand. “Carter, you could use a break. Why don’t you take the Aldens into the back room and show them how to play.”

Carter blushed. “I don’t think so,” he said, refusing to meet the children’s eyes. Then he hurried away without giving any further explanation.

Queenie frowned at his back. “You’ll have to excuse Carter,” she said as she grabbed a Word Master box off the shelf and handed it to Jessie. “He’s shy, and he doesn’t spend much time with children. He loves games, though. And he’s helped me so much with this store. He gets insulted if I try to pay him. Believe me, beneath that gruff exterior beats a heart of gold.”

“Any friend of yours, Queenie, is a friend of ours,” Grandfather said.

Queenie glanced toward the back of the store. “Just let me check on the man who’s installing my safe, and then we’ll set up a game, okay?”

The Aldens followed Queenie to the back of the store. A man with a dark mustache was just coming out of the back room. There was a patch on his shirt that said SILVER SAFES.

“Oh. Are you finished, Tony?” Queenie asked the man.

“Yes.” Tony set his toolbox on the floor and handed Queenie a clipboard. “Would you sign, please?”

Queenie signed her name, then gave the clipboard back to Tony.

Tony handed Queenie a small booklet and a separate piece of paper. “Here’s your owner’s manual and your combination. Give me a call if you have any trouble.”

As Tony bent down to pick up his toolbox, he noticed the game in Jessie’s hands. “Word Master, huh? That’s my favorite game.”

“Is it?” Queenie smiled. “Well, then you’ll have to stop back for a game sometime. That’s why I set up that sitting area in the front of the store. I’m hoping my store will become a place where people will hang out and play games.”

“That sounds fun. I’ll try and stop in sometime next week,” Tony said. He shook hands with Queenie, then left.

“You mean people can come in here anytime and play games with other people who are in the store?” Violet asked.

“Yes,” Queenie replied. “I never just wanted a store where people just come in, buy things, then leave. I want people to stay and make friends.”

“Especially kids!” Queenie gave Benny’s shoulders a squeeze. “In fact, I’d also like to arrange an area just for kids here in the store. I’m planning to call it the Kids’ Korner. I was hoping you children would help me design it?”

“Absolutely,” Queenie said. “That’s why I asked your grandfather to bring you in here today. Perhaps we can talk about some ideas after we play a quick game of Word Master.”

The Aldens all nodded enthusiastically as they moved closer to the back room. But before they got there, they heard sirens.

The noise grew louder and louder until it sounded like it was right outside the store!

“What’s going on?” Henry asked. They all exchanged worried looks.

“Do you know why the police are here?” Jessie asked a woman in a red jacket who stood at the edge of the crowd.

The woman turned. “Didn’t you hear? The Java Café was robbed last night!” 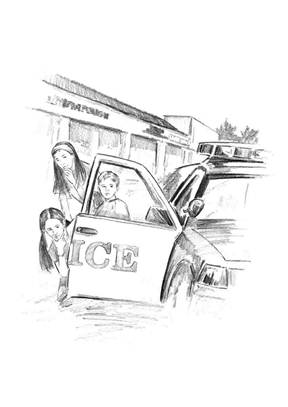 “Oh, no,” Queenie said, pressing her hand to her mouth.

Carter Malone stepped closer to Queenie. “What happened?” he asked the woman in red.

“I don’t know the specifics,” she replied. “All I know is that woman over there,” she pointed to a very distraught-looking young woman with straight blond hair, “came in to work this morning and found the safe standing wide open. Everything inside it was gone.”

Jaylin's World by Brenda Hampton
Regret List by Billings, Jessica
Work for Hire by Margo Karasek
The Right Kind of Love by Kennedy Kelly
The Stranger I Married by Sylvia Day
Maulever Hall by Jane Aiken Hodge
The Tower of Bashan by Joshua P. Simon
The Day of the Storm by Rosamunde Pilcher
Marriage Illustrated with Crappy Pictures by Amber Dusick
Material Girl by London, Julia
Our partner