Ganache with Panache: Book 2 in The Chocolate Cafe Series 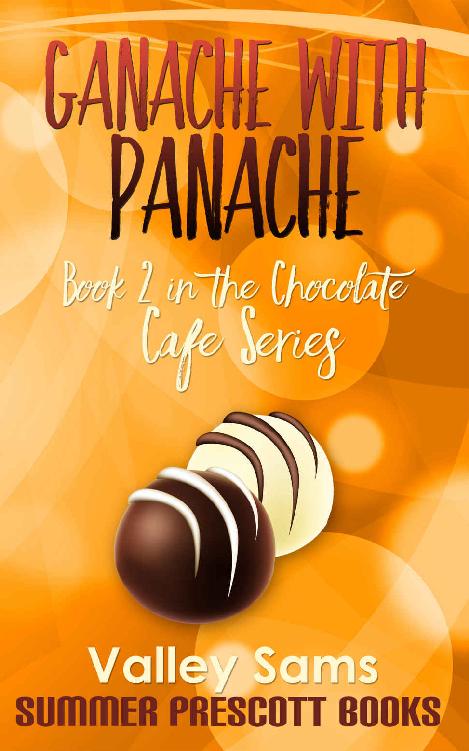 All Rights Reserved
. No part of this publication nor any of the information herein may be quoted from, nor reproduced, in any form, including but not limited to: printing, scanning, photocopying or any other printed, digital, or audio formats, without prior express written consent of the copyright holder.

**This book is a work of fiction. Any similarities to persons, living or dead, places of business, or situations past or present, is completely unintentional.

Author’s Note:
On the next page, you’ll find out how to access all of my books easily, as well as locate books by best-selling author, Summer Prescott. I’d love to hear your thoughts on my books, the storylines, and anything else that you’d like to comment on – reader feedback is very important to me. Please see the following page for my publisher’s contact information. If you’d like to be on her list of “folks to contact” with updates, release and sales notifications, etc…just shoot her an email and let her know. Thanks for reading!

…if you’re looking for more great reads, from me and Summer, check out the Summer Prescott Publishing Book Catalog:

http://summerprescottbooks.com/book-catalog/
for some truly mysterious stories.

And…look up The Summer Prescott Fan Page on Facebook – let’s be friends!

If you’re an author and are interested in publishing with Summer Prescott Books – please send Summer an email and she’ll send you submission guidelines.

The sunlight caused the darkness behind Zachary’s closed eyelids to turn into a soothing, deep burgundy shade. He sighed and enjoyed a languid stretch—arching his lean body against the sand. He deserved this as much as he needed it.

Three major fashion shows, a highly obnoxious press junket, and a royal wedding? There was no question that he had some private time owed to him.

But could he handle it? That was the question.

Beneath the deep hum of the waves hitting the beach, Zachary could make out the sound of his partner’s voice as he talked on his cellphone. Annoyed at the interruption, Zachary opened his eyes to squint in the direction of the intrusive chatter.

His partner, John, was picking his way toward him through the sea grass and driftwood. In one hand he had a tumbler of ice and what was more likely straight rum than mojito. In the other he balanced both his phone and a lit cigarette. He shuddered noticeably as a piece of seaweed attached itself to his sandals.

John was obviously not a fan of nature. By drinking heavily and complaining almost from the second they pulled into the driveway, he had made Zachary painfully aware of the fact that he didn’t want to leave their penthouse in the city for their beachside vacation home.

The constant sour look on his face was only intensified by whoever was on the phone. As he approached, Zach could make out the conversation more clearly.

“He doesn’t normally do private brides, let alone two of them in the same town.” John rolled his eyes “Yes. There’s another bride.”

There was a pause during which John moved the phone from his ear and shook his head. Zach, intrigued, sat up. He adjusted his oversized beach umbrella so that he could see John’s face better. Now that he was closer, he could hear a woman yowling hysterically.

“Mr. Lau likes to keep his clients confidential, Mrs. Hood. I’m just not able to tell you with whom he’s working at this time. In fact, he’s supposed to be on vacation…” John glared down at Zach. “He shouldn’t have even taken the one client, let alone another.”

Close enough now to share the blanket, John maneuvered himself into position beside Zach. He moved the phone so that they could both hear the drama on the other end.

A woman’s voice, harsh and demanding, rang out between the two of them. “MY daughter is not just
any
bride. She’s as good as
any
princess and certainly better than anyone in
this
town. Tell him I’ll pay whatever he asks. Tell him I’ll double it if he drops the other girl while we’re at it.”

‘Hold’ consisted of John placing the phone containing Mrs. Hood against the impeccably casual linen of his shirt. He smiled wryly and took a deep drag of his cigarette.

Zach shrugged his shoulders. What else was there to do? He wasn’t the partying type, not any more. Since his last stint in rehab, he had managed to stay clean for a record six months. The only way he had accomplished that feat was to throw himself into work and to stay as far away from the decadent nightlife and partiers that had got him into trouble in the first place as possible.

Zach found himself gazing at his partner’s drink; the way the condensation beaded on the glass, the far-off glazed look in John’s eyes. It was going to be harder than he thought to stay committed to sobriety.

“Tell her I’ll do it.” He stared out at the long strip of beach and sparkling water. “Let her know I’ll take her up on that ‘double the cost’ offer as well.”

Annoyed, John blew a plume of smoke in his direction.

“What? We were supposed to be relaxing!” He hissed, the phone still clutched to his chest. “You’ve already taken on one bride and I specifically told you not to. Why not just go back to the city then? At least I could be entertained there.”

Zach’s heart sank a little. He had known that quitting all his bad habits was going to be tough, but he hadn’t thought it would have such a profound effect on all his relationships. He looked back at the man beside him. John looked impatient and annoyed——no doubt glaring at him from behind his expensive sunglasses. If Zach was being honest (something he’d been doing a lot of lately) - he looked like a big baby.

“Idle hands are the devil’s playthings.” Zach said. “Make an appointment with her this afternoon. Around three. If Mrs. Pageant Mom can’t make it, it’s her loss.”

As if to prove a point, John raised the tumbler of ice and alcohol to his lips and took a deep, long drink.

Zach felt a painful mix of disappointment and fury well up in his chest. He’d felt it before—that mixture of emotions was the death rattle of relationships. As soon as he felt it, he knew his number was up.

“Here’s to a relaxing holiday.” John said bitterly, placing the phone to his ear. With the phone no longer muffled by John’s shirt, Zach could make out a few choice curse words from the elegant Mrs. Hood.

Obviously it wasn’t going to be easy, Zach thought, as he ran barefoot toward the ocean. But was it going to be any harder than getting bullied into a relapse by his drunken, bored partner?

Nothing could be worse than that.

If Brie weren’t her best friend, Mac would’ve wondered what asylum she’d escaped from. She practically skipped in front of Mac, her tiny elf-like body vibrating with excitement. Over one arm she had slung a basket that she had filled with the best of her chocolate creations. The smell coming from that wicker wonderland was enough to make the few people they passed on the street pause and sniff the air like prairie dogs.

Sabrina turned to face Mac, walking backwards as she went.

“You are going to love Vanessa. I’m serious.”

“I know, I know.” Brie said. “You don’t like most people, but Vanessa? You’ll love her. She’s sweet, introverted, freethinking, ummm, what else?” Still walking backwards, Brie was managing to avoid the racks of tacky tourist tee shirts and tie-dyed dresses that had taken over the sidewalk. Summer and its tourist trade hadn’t so much begun in Mackenzie Bay as it had invaded it. The main drag and its rickety rows of historic buildings were suddenly plastered with bright ice cream advertisements, wind chimes, kites and the kinds of tee shirts that only travel-weary tourists think are funny. There wasn’t a day that went by without Mac launching into a bitter tirade over outsiders’ habits and annoyances.

Of course there also wasn’t a day that went by where their chocolate shop hadn’t been completely sold out of yummies by closing time.

“I liked her as soon as I met her back in art school. She was literally the only one in the fashion program who wasn’t, you know, tragically affected.”

Sabrina dodged a plastic torso dressed in a neon string bikini, nearly knocking the display to the ground.

“Turn around! You’re going to annoy the tourists, um, owners.” A heavyset man stepped out from the darkness of his shop like a bear emerging from the bush. He steadied the swinging headless torso and glared at the girls.

Mac apologized and spun her friend in the right direction.

“Just walk like a normal human being,” Mac ordered.

“You have to admit,” Sabrina said as the two friends turned the corner, away from the main street and all it’s apparent pedestrian challenges. “It’s nice to get away from the shop for a day. I don’t know how you’ve been handling all those customers. I’m starting to think I have the easier job.”

“It’s not that hard when you take into account the fact that we made over $3000 yesterday.” Sabrina stopped in her tracks, her amber eyes widening in surprise.

“That is a lot of money. That is an amazing amount of money!” she said, shocked.

“That…” It was Mac’s turn to spin around and walk backwards dramatically, “Is why I agreed to close the shop and go visit your friend.”

Vanessa’s boutique was located in the area of downtown closest to the water. Like the rest of the properties that faced the stone seawall, it was desperately weather beaten, as the waves hitting the rocks were often so big that salty mists of water exploded up and over the street. The result was the kind of unassuming, raggedy feel to the place that Mac missed so much in her own shop.

The door chimed as they walked into the small, one-room space. The friends were immediately hit with the smell of expensive candles. Scattered throughout the shop, the candles filled the modest room with the scent of rich wood and sweet fig.

Hanging from racks against the walls were clothes that looked like they had been flown directly from the chicest boulevards of Europe. Mac fell into a of reverent trance as she gently flipped through them. They were perfectly, subtly tailored, and managed to be both feminine and strong.