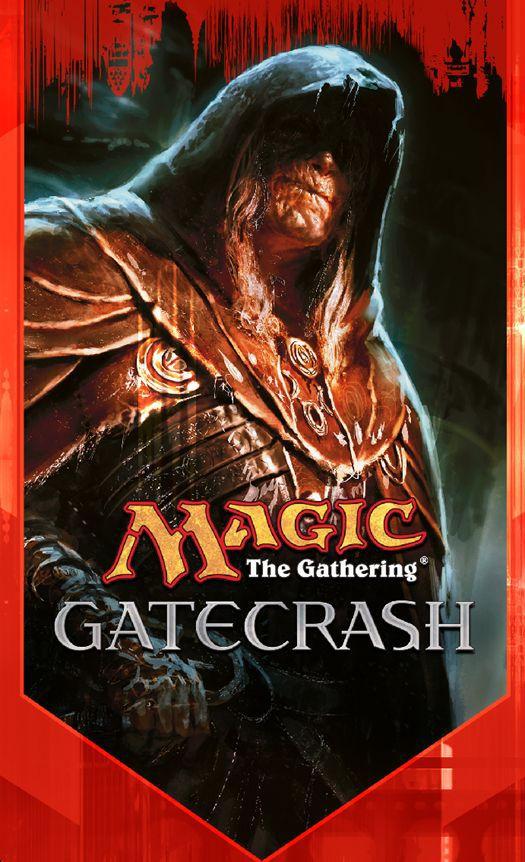 A Planeswalker’s Guide to Alara

Path of the Planeswalker

Path of the Planeswalker, volume 2

Return to Ravnica: The Secretist, part 1

GATECRASH
The Secretist, Part Two
©2013 Wizards of the Coast LLC.

This book is protected under the copyright laws of the United States of America. Any reproduction or unauthorized use of the material or artwork contained herein is prohibited without the express written permission of Wizards of the Coast LLC.

MAGIC: THE GATHERING, WIZARDS OF THE COAST, and their respective logos are trademarks of Wizards of the Coast LLC in the USA and other countries.

Visit our websites at
www.wizards.com
MagicTheGathering.com 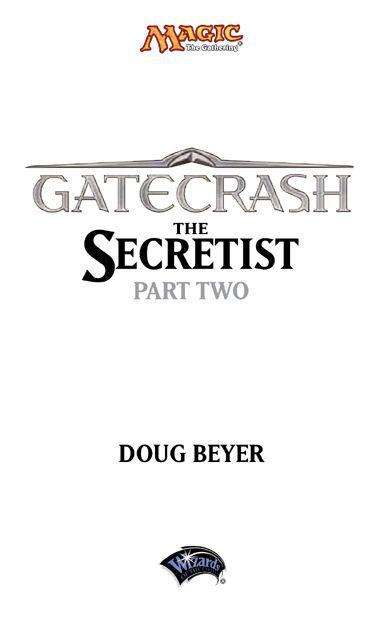 Stirring Up the Past

Aid From an Enemy

Armies in the Streets

Jace felt like a stringless marionette, heavy-limbed and uncoordinated, splayed out on damp stone deep under street level. The chamber around him, a high-ceilinged and cavelike space hidden down in the forgotten levels under Ravnica’s Tenth District, echoed his quick, wheezing breaths. Jace had never thought of his life measured as a certain number of breaths before, but it struck him that that number was finite.

Emmara stood nearby, and though her healer’s magic was practiced, every part of his body told him he still shouldn’t move. He felt nothing but a unanimous ache, the kind of pain only the club of a Golgari troll could confer. The tissues were still knitting, fiber by fiber. His muscles felt like mashed pulp.

And then there was the problem of the Dimir vampire who had come to kill them. Mirko Vosk had chosen the perfect moment to appear out of the shadows; the marauding troll had fled, leaving Jace weakened; and Emmara had dismissed the massive elemental she had summoned. Vosk’s muscles were taut, like carvings in cold, dense marble, and yet his
movements seemed incredibly light. His feet barely glanced against the ground as he strode forward—as if gravity was optional for him.

“My master only values what you have in your minds, mortals,” said Mirko Vosk. “So your bodies need not be intact for what’s about to happen to you.”

Jace lurched to his feet, wobbly as a calf. He felt something tear in his ribcage, and he winced. He knew he looked far from intimidating, and he knew the interloper would not take him for a threat. Still, Jace mustered all the menace he could. He drew himself up and assumed a battle stance.

Vosk grinned, flashing his fangs. He moved with unnatural speed, slamming into Emmara before Jace could react, sending her skidding across the chamber. She slid to a halt against the wall, crumpled and not moving. He turned to Jace.

Jace put up a hand and tried to muster a spell to incapacitate Vosk, but the effort was weak, and Vosk evaporated Jace’s halfhearted magic with a dismissive gesture.

Vosk did not spend words gloating. He grabbed Jace by the shoulders, swiveled him around with vampiric strength, and bit into the nape of Jace’s neck. Twin needles drove right through the base of his skull. Jace could feel more than pain, more than the awful sensation of his blood forcefully exiting his body. He felt an invasive stab into his thoughts, a probing hunger that groped around the inside of his skull.

Jace struggled and flailed, trying to land an elbow or kick an ankle, but Mirko Vosk held him fast as he made his psychic attack. Jace could feel the mental intrusion, like an insidious, predatory version of one of his own mind-reading spells. He had the sense that
the vampire was sampling his memories, tasting them one by one as he fed.

Jace craned his neck, his arms pinned. Out of the corner of his eye, he could see Emmara, but she wasn’t moving—unconscious, or worse. Jace would have to fend off the vampire himself, but he was outmatched in both speed and strength.

Jace needed mana in order to forge any kind of offense. He reached for his deepest bonds, those connections to distant planes whose lands flowed with mana, but the magical energy only trickled into him, replenishing drop by drop. His blood was being drained out of him far faster than the mana was filling him.

These are my last breaths
, he thought.

But without warning, the vampire snarled and released him, sliding his fangs out of Jace’s neck. As the two parted, their mental contact broke. Vosk staggered back, wiping Jace’s blood from his mouth with disgust.

“Impossible,” Vosk said. “You know nothing.”

“You shouldn’t have done that,” said Vosk. “Now it’s going to be much worse for you. I could have taken the information, returned it to the Secretist, and left you both alone.”

Jace needed something simple, something that wouldn’t demand more than a whiff of mana. He didn’t bother putting up his normal safeguards, his shield of psychic spells. He would simply enter the vampire’s mind and tear with abandon, biting into Vosk’s thoughts as the vampire had bitten into his. Jace would use his consciousness as a blade, slashing at anything and everything he found, trying to ruin
the vampire’s entire psyche if he could. But he wasn’t ready.

Vosk backed away slowly, keeping his eyes on Jace, daring him to attack as he let the shadows envelop him. He was gone.

Jace sat cradling Emmara’s head in his lap. She was breathing, but barely, and her body was limp. Blood seeped down her temple, next to her eye. Jace kept his senses alert, ready to lash out if anything happened upon them.

He tried to reach out with his telepathy, to contact someone for help, but they were still deep below ground. Who would he reach out to? He feared any presence he might discover in the undercity. It struck him how few people he really knew on this world, how few people he had relationships with even across the entire Multiverse.

He brushed a lock of hair out of Emmara’s eyes. If there was a way to planeswalk away from here and carry Emmara with him, he would do that. They could flee Ravnica and live in peace somewhere beyond the boundaries of this plane, somewhere without guilds or monsters to stalk them. But she was not a planeswalker. Her nature did not permit her to leave.

For a fleeting moment, Jace considered leaving on his own, and he stifled that thought with shame. He had the power to travel to every dimension he could find, but she was the anchor. She tied him to this life on Ravnica.

He barely knew anything about her. For being able to peer inside others’ minds at will, he knew very little about people.

“Emmara.” He held her gently, supporting her head.

She craned her neck to look around the chamber,
and winced. She lay back again and looked up at Jace through slits. “Tell me you killed him.”

“He almost killed me, but he fled. Are you all right?”

“Your head is bleeding.”

“Well, I’m awfully good at giving you something to heal.”

Jace looked for a smile on Emmara’s face, but none came. She didn’t seem to have it in her. They went through the motions of recovery in silence: healing magic, the patching up of torn cloaks, and an assessment of their surroundings.

Jace and Emmara dragged the bodies of the Rakdos warriors into the sludgy puddles of the chamber. Emmara used nature magic to encourage moss and fungus to grow over the corpses. The slain cultists became a decomposing garden.

“Let’s get you back to the Conclave,” said Jace.

She nodded. There wasn’t much hope in her.

Jace looked into a passage that led away into darkness. “We’ll take the low tunnels for a while. It might actually be safer down here. I think a lot of people up there are looking for us.”