Read Gathering of the Titans: The Tol Chronicles Book 2 Online

Gathering of the Titans: The Tol Chronicles Book 2 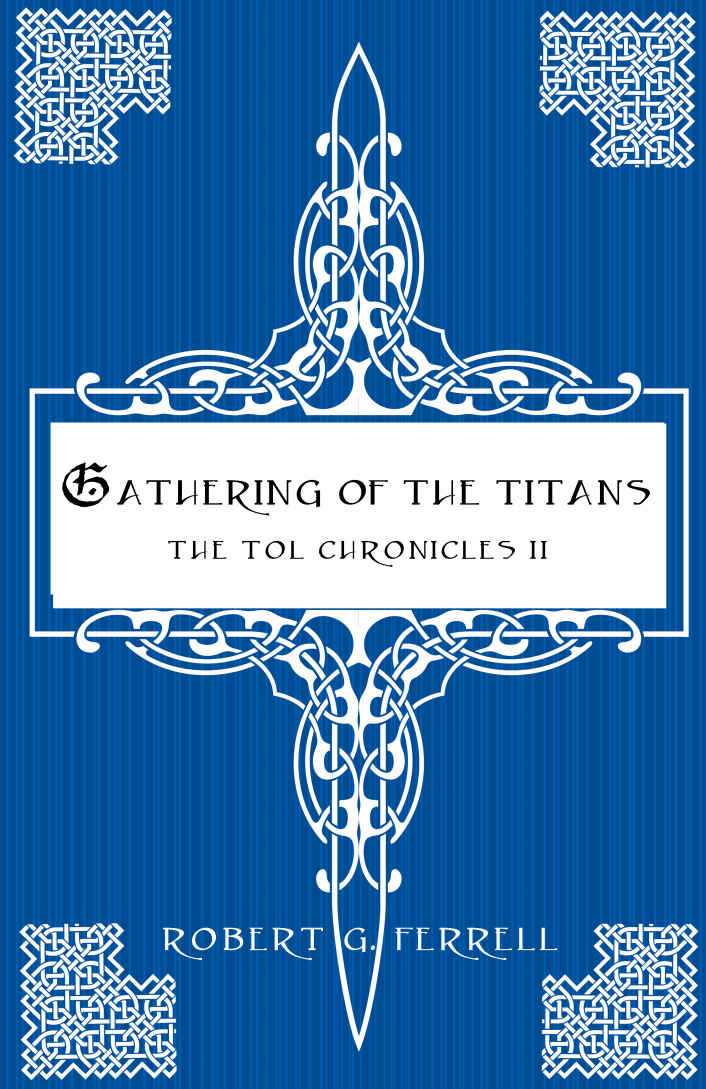 All rights reserved. No part of this publication may be reproduced, stored in a retrieval system, or transmitted, in any form or by any means without the prior written permission of the publisher, not be otherwise circulated in any form of binding or cover other than that in which it is published or transmitted.

This is a work of fiction. Names, characters, places and incidents are either a product of the author’s imagination or are used fictitiously. Any resemblance to actual persons, living or dead is entirely coincidental.

Printed in the US.

This novel was pounded out, as were all of my previous works both great and small, in precious odd fragments of time in the evenings and on weekends. It is the final piece of writing I will ever produce under those circumstances, a generous Providence willing, as I am now officially retired from my ‘conventional’ career and devoting myself entirely to life as an author. My wonderful, talented, patient, wise-as-Solomon wife Adrienne is solely responsible for my being able to make such a bold and frankly terrifying move; I and anyone who reads and enjoys my work are deeply indebted to her for allowing me this freedom.

It can be difficult to compose acknowledgements: there are so many people who contribute in one manner or another to helping me get nominally coherent words into a readable format. For this go- around I am especially beholden to David Watson—the inspiration for Oloi—who also educates and entertains me; Jenice Amber Dean, whose connection to one of the characters in this book should be obvious to anyone who reads it; my Facebook Author page fans, who encourage me on a daily basis; the literary track coordinators and other con organizers who invite me to be a guest author and/or serve on panels at your cons (I really enjoy that); Martha Wells and Elizabeth Moon, just for being there for me to admire and emulate; and lastly the graphic novel artist Paul Taylor, though I have never met nor even corresponded with him. Over a period of three days I read the entire 13 years of his Web comic “Wapsi Square” in conjunction with editing this book. I let myself read four or five strips as a reward for another page of editing completed: his storyline is just that good. This is not a rapid and efficient way to edit a manuscript, but it sure is a heck of a lot more fun. Thanks, Paul.

Here’s hoping no one will have to wait eighteen months before my next novel ever again.

The Royal Engineering Corps had their job cut out for them. There had been damage reported in every Ferroc, ranging from minimal disruption of services and some minor structural impairment affecting outlying villages in Ferroc Loca to widespread, severe destruction in Ferroc Norda, where 70% of the second-largest city, Fenurian, was destroyed and uninhabitable. While repairs in Ferroc Loca were handled by normal maintenance crews, in the other four provinces a senior or master engineer was appointed to spearhead the infrastructure rebuilding effort. Senior Engineer Beyya Corresca was assigned to Ferroc Oria, where there was light to moderate damage. Master Engineer Eglas Qaglo was sent to Ferroc Sutha, where the damage was moderate to heavy, with several villages demolished and several more severely damaged. Senior Engineer Hin-Lim Varpen traveled to Ferroc Osta, which saw heavy to severe damage, with multiple villages impacted and some damage to Cladimil’s less well-constructed buildings. Master Engineer Koxo Nilred was entrusted with the most intense effort, in Ferroc Norda.

His Majesty Aspet consulted with local leadership in each damaged area and approved the plans for reconstruction. He had personally signed the Writ of Confiscation nationalizing Pyfox Consolidated Industries and turning over all of its current and future profits to the Royal Engineering Corps for use in the rebuilding effort. Since there would be no more static portals for accessing The Slice, no dedicated facilities where mages need congregate for such access were necessary. They could be multiuse buildings now, serving as magical conduits when required and then reverting to public spaces like art museums or vaccination clinics at other times.

Five master talismans had been created, one for each Magineer, from which lesser artifacts could be cloned so that no mage had to travel far for a direct pipeline to The Slice. The plan was that eventually every community with an active Lodge of Mages would receive one of the lesser talismans. As with most any sea change, there was resistance to the new schema. Several local mages’ associations complained loudly regarding the talisman concept, but they really had little recourse but to adopt it nonetheless.

In the end everyone had to accept CoME’s authority whether they liked it or not, as CoME held all the cards. Privately, the Magineers worried what effect the revised system would have on their own prestige and power. Under the historical regimen, while all mages had access to The Slice through their own personal specula, the amount of manna that could be drawn thusly was limited to that usable by a single mage. Only at the Dubers were the manna pipelines spacious enough for tasks that required great magical energy flows.

Now that the physical location of the Dubers was more or less irrelevant, since the major talismans were easily portable, the question of the expense of maintaining the ornate structures arose. While they could yet serve their original function, and were well-suited for it, the fact was that now any location at all could theoretically serve that purpose. In the Dubers’ defense, they already had the proper facilities for handling magical energy and, of course, high-bandwidth fiber connections to the RNet. For any project that required access to both arcane energies and digital processing, the Dubers were still the best choice available. Eventually it was decided to retain the Dubers, as much for their symbolic value as their practical.