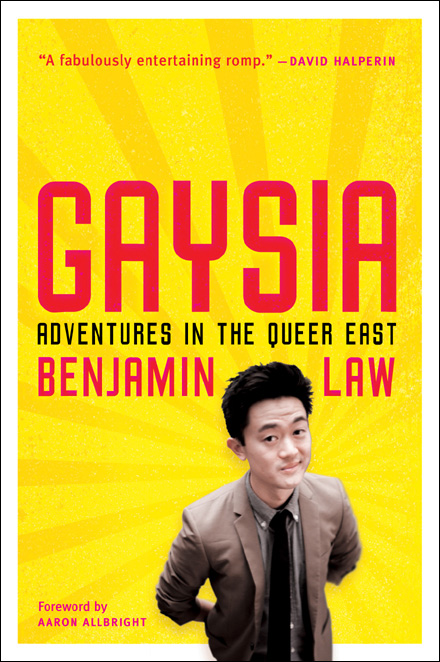 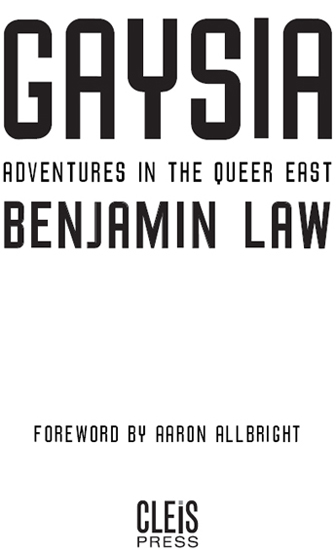 âBenjamin Law has put together a book that at first glance starts as a sexy romp through Asia, bringing him to the gay hotspots coming into consciousness, in what he calls the gayest continent on earth. It's the truth, of course, based on census figures in this most populous area of the world. Law digs deeper though, bringing us far under the surface, giving us keen observations on emerging gay rights issues in these regions, along with the poignant contrasts and issues that tourism of all kinds brings, destroying paradise even while lifting countries and destinations out of poverty. Of Asian extraction, Law also straddles two worldsâhe is a part of the cultures he is seeing, and yet not, as a native-born Australian. Law has achieved what seems the impossible in
Gaysia
: a sensual, enjoyable read, full of titillation, at once part of the gay travel circuit, yet deep with sociological observations along with a clear understanding of Asian history. Whether you're planning a trip to Asia, an armchair tourist, or merely curious,
Gaysia
is a book you should add to your collection.'

âMichael Luongo, editor of
Gay Travels in the Muslim World

â
Gaysia
is Brisbane-based Law's first attempt at book-length journalism and it consolidates him as one of the most surprising and entertaining voices in Australian non-fiction writing.'

âLaw is a very funny writer.'

âLaw comes across as not just fun to be with, but sensitive, quick to empathise, sharp-eyed and, well, extremely nice....
Gaysia
is focused, observant (within its own limits) and often thought-provoking in a refreshingly upbeat way.'

âBenjamin Law is a really good writer and
Gaysia,
a book exploring homosexuality and its reception in Asia, is a fantastic book.'

âThis is investigative journalism carried out with style, empathy and unflinching honesty.'

â
Gaysia
is one of the most entertaining and truly wonderful non-fiction books I've ever read.'

âGeorgia Dixon, Under the Stilts

âLaw has an incredible talent for storytelling, and the anecdotes told to him by his diverse cast of interviewees are as riveting and illuminating as his own first-person accounts.'

All rights reserved. Except for brief passages quoted in newspaper, magazine, radio, television, or online reviews, no part of this book may be reproduced in any form or by any means, electronic or mechanical, including photocopying or recording, or by information storage or retrieval system, without permission in writing from the publisher.

First published in 2012 by Black Inc., an imprint of Schwartz Media Pty Ltd, in Australia.

A
N OLD
T
IBETAN PROVERB
says that on every journey, you must die once. The person who returns should not be the same person who left. I invite you to travel to Indonesia, Thailand and China, to Japan, Malaysia, Myanmar and India with an observant and sensitive explorer as your guide. It will be an adventurous trip in which you meet the moneyboys of Bali, the ladyboys of Thailand, the hidden gay Internet of China, the Chinese gay ghosts and their homowives and the grand gay celebrities of Japanese television in a country that pretends to have no other kind of LGBT person. You will be befriended and taken around with Christian and Muslim fundamentalists who claim to cure homosexuality. And yes, they have been named after and trained by American fundamentalists and the folk at the Christian ex-Gay organization called NARTH. The extreme poverty and rampant AIDS in Myanmar will open your heart in sadness. And you will get to know the inspiring activists of India, gay and straight, along with a gay swamiji who thinks that being gay is sick and must be cured. There is a theme of fear and self-hatred hereâthat runs throughout the worldâbut it is balanced out by the Queer Azaadi Mumbai Pride Parade, the biggest queer event in the world's most populous democracy.

There are a lot of ingredients here, but they are blended together with a rare skill: over-the-top beauty pageants, sacred
in their depth of feeling for lives lived truthfully, no matter how difficult it can be; religious institutions and persons, profane in their betrayal of that which is best in us; dangers and gay celebrations; an exotic itinerary through seven of Asia's (and the world's) most interesting countries; a fast, fabulous, funny, sad read of life, love and the great gay happening world of Asia. Cheers to the future! And to your guide and friend through
Gaysia
, Benjamin Law.

Author of
The Land Near Oz: Two Gay Yankees Move to New Zealand

T
HIS IS A WORK OF
non-fiction. For brevity or clarity, the chronologies of some incidents have been condensed or altered. Some names have been changed to protect the identities of people or organisations.

The meaning and usage of the terms âtransgender' and âtranssexual' vary between countries, communities and individuals. In this book, âtransgender' generally refers to people who express their
gender
in non-conforming ways through behaviour, dress and appearance. âTranssexual' refers to people who have undertaken hormonal and/or surgical procedures to physically affirm the
sex
with which they identify.

The choice between the names Myanmar and Burma â and the names of the country's former capital (Yangon and Rangoon, respectively) â is subject to debate and often contested. Usage varies among countries, and even among news organisations within the same country. (In the United States, the
New York Times
and Reuters use âMyanmar'; the
Washington Post
and
Time
magazine use âBurma'.) I have used Myanmar for several reasons, including the burgeoning democratic reforms that took place shortly after I left the country, and the fact that every local person I spoke to called their country âMyanmar'.

O
F ALL THE CONTINENTS
, Asia is the gayest. Deep down, you've probably had your suspicions all along, and I'm here to tell you those suspicions are correct.

Let's do the maths. Of the world's ten most populous countries, six of them (seven if you count Russia) are in Asia: China, India, Indonesia, Pakistan, Bangladesh and Japan. Across the continent are close to four billion people, making Asia home to the majority of the world's people. So doesn't it stand to reason that most of the world's
queer
people â lesbians, gays, bisexuals, transgender and transsexual folk â live in Asia too, sharing one hot, sweaty landmass and filling it with breathtaking examples of exotic faggotry? I would think so.

Perhaps I'm biased. You tend to reach for massive generalisations after spending nearly a year skipping between seven Asian countries, sitting backstage with Bangkok ladyboys prepping themselves for beauty pageants, chatting to Tokyo's celebrity drag queens, marching in the heat with Mumbai's fierce queer rights activists, listening to the testimonies of Melaka preachers who claim they can heal homosexuality, and hanging out with Bali's moneyboys and the old foreigners who hire them.

But in 2009,
Time
magazine ran a major story, âWhy Asia's Gays Are Starting to Win Acceptance'. It was an interesting
piece about globalisation and a region in flux, one exploding economically but still wedded to strict religious and cultural traditions when it came to sex and marriage. The story started in Nepal and moved through developments in China, Japan and India, and argued that when it came to gay rights, momentum was building.

âIf nothing else, people aren't denying the existence of homosexuality anymore,' said one commentator. âThe Asian social institutions and beliefs that often stood in the way of tolerance â religious conservatism, intense emphasis on marriage and having children, cultural taboos against openly discussing sexuality â are weakening.'

Was that true? Eventually, I would discover nothing is ever so straightforward, especially in Asia. Some countries embraced their transsexual people, but didn't care for lesbians. Other countries didn't
hate
homosexuals as such; they just didn't really
get
them. Some celebrated transsexuals but denied them basic rights; others didn't mind if you were a gay man, just as long as you married a woman.

I might have been Australian, but I was ethnically Asian too. For me, it was time to go back to my homelands, to reach out to my fellow Gaysians: the Homolaysians, Bi-Mese, Laosbians and Shangdykes. I would journey through their cities by foot, plane, cross-country train, bus, rickshaw, trishaw, tuk-tuk, taxi, motorcycle, scooter and a utility truck that was originally designed to carry livestock. I would experience the deathly cold of Haridwar, get drenched in Bangkok's downpours and feel my face melting off in a Beijing heatwave. I would contract heat rash, whooping cough and dehydration from Indian food poisoning so intense that, by the end of it, I saw the eye of God. (From what I remember, it was brown.)

Asia is a big place, a sprawling and intoxicating mix of landscapes and languages. Where to start? I decided to begin where most Australians did: taking it easy on the Indonesian island of Bali, leisure-filled paradise and island of the gods. But first, for reasons you will soon understand, I would have to get naked. Very, very naked.

The Summer of Last Resort by Browning, J. A.
Ethereal by Moore, Addison
Hard Days Night (The Firsts Book 8) by C.L. Quinn
High in Trial by Donna Ball
Between Black and Sunshine by Francis, Haven
Bad Things by Tamara Thorne
Walking Dunes by Sandra Scofield
MisMatch (A Humorous Contemporary Romance) by Nana Malone
Sleeping With the Enemy by Kaitlyn O'Connor
Carlie Simmons (Book 1): Until Morning Comes by Sawyer, JT
Our partner