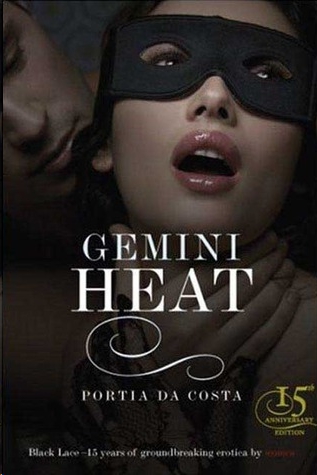 This book is sold subject to the condition that it shall not, by way of trade or otherwise, be lent, resold, hired out or otherwise circulated without the publisher's prior written consent in any form of binding or cover other than that in which it is published and without a similar condition including this condition being imposed on the subsequent purchaser.

.... who makes my mind fertile THANK YOU

Sweat ran freely in the crease between her buttocks, caressing them like an unseen lover, and she imagined it sizzling as it trickled and pooled in her vulva. Her entire body felt as hot as the steamy air in the gallery, but down there, in the peach-soft groove of her bottom, the conditions were almost volcanic.

It's this bloody exhibition! she thought with feeling. It's enough to make a celibate, librarian nun boil over, never mind a poor sex-starved creature like me.

There was everything here. Solo sex. Couples. Groups. Explicit penetrations. Byways and fetishes. Every dark, kinky concept from a wild man's wildest dreams and more.

A wild
woman's
dreams too, thought Deana, moving uncomfortably and wondering if anyone could read her thoughts. There were times when she loved how she felt now: the congestion in the pit of her belly, the heat in her dark, secret crevice, the swollen sensitivity of her clitoris. But it was no fun in public, alone, and with no chance of relief on the horizon. She sipped her wine in the vain hope it might quench her lust as well as her thirst, but it had no effect. She had a lunatic urge to touch herself, here, in the middle of the gallery. To satisfy - albeit temporarily - the dreadful aching yen for sex that had been plaguing her since she'd told Jimmy their fling was over.

Delia was the one who should have been here tonight, of course; it was her name on the invitation. Letting Deana come in her place was just a sisterly way of saying sorry . . . Sorry for not sharing their birthday as they'd always done.

Deana wasn't angry with her twin. If anything, she was sorry for her. Even though it was murder on the libido, viewing the de Guile Collection was infinitely preferable to dining with slimy, odious Russell. What the hell did Delia see in him?

Weaving her way through a swarm of chattering celebs, Deana moved on to the next exhibit - then almost wished she hadn't. It was a floor to ceiling full-colour photograph of a man and woman making love. And not one of those airy fairy things with tactfully placed shadows either. The couple in the brushed steel frame were actually doing it, copulating for real, and their glistening, tightly nested sex organs were 'wham bam, thank you ma'am' right in the centre of the photo.

'Good God,' whispered Deana, taking another sip of wine. As the crisp, chilled taste flooded her mouth, two thoughts occurred to her. One, that this was her third drink and she was tipsy; two, that the photo above her made her feel worse than ever. Or better, depending on which way you looked at it. Wine and sex were inseparably linked in Deana's mind, and suddenly she wished she hadn't been so hasty about Jimmy. She stared up longingly. She needed what
they'd
got so badly, and even if Jimmy was an unimaginative so-and-so, at least he was good at plain, hard and consistently orgasmic sex.

Drawing on her artist's ability to 'image', Deana put herself into the picture before her. She saw a slim, shapely woman with dark hair, dark eyes and a warm apricot complexion. An earthy girl with a good figure and a face that was dainty and heart shaped, eyes that were big and bright, and a mouth that was small, but naturally red and with a pout that begged to be kissed.

Smiling at her own vanity, Deana succumbed to preening. She smoothed down her thin black dress over her narrow waist and the soft, curving flare of her hips.

An otherwise ninety-nine per cent perfect fit, the black cotton frock was just a smidgeon too tight across her breasts. She'd known that when she'd seen it on the market stall, but she'd loved it and tried it on anyway. The stall holder had peeped at her through the curtains of his makeshift cubicle. He must have known from the dress's cut that she wouldn't be able to wear a bra with it, and that he'd get a free show. But somehow, Deana hadn't minded him seeing her bare breasts. She'd enjoyed it because in many ways, she
liked
being looked at. Especially by cute-looking rogues like that stall man.

She couldn't imagine Delia feeling the same though. Or even liking the dress, for that matter. Second-hand Indian cotton with fringes and mirror beads wasn't her sister at all, and with a sudden pang of misgiving, Deana wondered if she should've tried a bit harder to look like the woman she was supposed to
be
tonight.

Facially, it was easy. She and Delia were identical twins, and their alikeness was so uncanny that even their parents had sometimes had problems. Nowadays though, their radically different tastes in clothes and styles made differentiating between the Ferraros simpler. At a function like this, Delia would've worn something subtle, neutral and very Jean Muir. Her hair would've been groomed to within an inch of its glossy life, and
not
in a turbulent, nut-brown tangle like Deana's. What's more, sensible Delia would've been drinking Perrier water with a slice of lime in case her boss of all bosses turned up - not swigging down glass after glass of Frascati as if sobriety were going out of fashion.

The bonking bodies in the picture were suddenly too much for Deana and she decided to move on. Perhaps there was something blander to look at somewhere, something that wouldn't make her feel so needful?

But as she flicked through the catalogue, she felt the most curious sensation surround her. On the back of her neck, the tiny downy hairs stood to attention all at once, and she saw a vague, dark shadow slide into the left-hand periphery of her vision. She gasped when a presence of some kind seemed to reach out and stroke her. Fondle her slowly and with complete familiarity, like phantom male fingertips sliding slickly across the tissues of her sex.

As unobtrusively as she could, she turned and looked to her left.

There was a man standing in front of the next exhibit, studying it closely. A man so dark and erotically gorgeous he could've been one of the exhibits himself. Schooling herself not to ogle, Deana concentrated on her catalogue, her mind's eye struggling to 'image' again . . . image
him
this time, not herself.

You're imagining things, Deana, she told herself. You're drunk. He's probably nothing special and not even interested.

Even so, her skin glowed hotter than ever and the blush from her face and throat flowed insidiously down to her sex. Her self-awareness doubled, trebled and quadrupled, and her breasts seemed to swell and look lewdly obvious beneath the skimpy top of her dress. She felt as if someone nearby was playing an X-ray beam across her body and taking salacious pleasure from the fact that - because of the heat - she was wearing precious little in the way of underwear.

Suddenly, she could smell herself too, even though she'd lathered herself in rose-scented skin balm just before she'd come out. With that sombre shadow just inches away, her body smelt musky, sexy and sweaty. A huge blast of pheromones had swamped her feeble perfume, and seemed to be drifting around her like an invisible, mate-calling fog.

As soft footedly as she could, Deana strolled away. The rush of adrenalin had made her dizzy and she needed to find a cloakroom or something where she could spray herself with cologne and try and let her body cool down. Only then dare she come back and find her dark, disruptive stranger. Taking another glass of wine, and resolving to drink cautiously from now on, she scanned her surroundings. There was no obvious jign indicating a ladies room, but she did see a spot she could escape to.