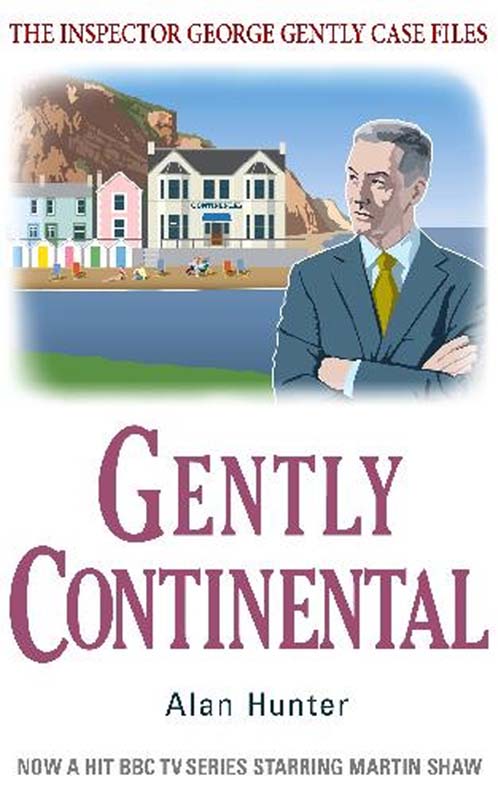 Alan Hunter
was born in Hoveton, Norfolk in 1922. He left school at the age of fourteen to work on his father's farm, spending his spare time sailing on the Norfolk Broads and writing nature notes for the
Eastern Evening News
. He also wrote poetry, some of which was published while he was in the RAF during the Second World War. By 1950, he was running his own bookshop in Norwich. In 1955, the first of what would become a series of forty-six George Gently novels was published. He died in 2005, aged eighty-two.

Gently by the Shore

Gently Down the Stream

Gently Through the Mill

Gently in the Sun

Gently with the Painters

Gently to the Summit

Gently Where the Roads Go

Gently with the Ladies

First published in the UK by Cassell & Company Ltd, 1967

This paperback edition published by Robinson,

an imprint of Constable & Robinson Ltd, 2012

This is a work of fiction. Names, characters, places and incidents are either the product of the author's imagination or are used fictitiously, and any resemblance to actual persons, living or dead, or to actual events or locales is entirely coincidental.

W
HAT IS MAKE-BELIEVE
? Is it any more than a label for an attitude?

Consider, for example, this Hotel Continental of Mrs Breske's, from which, even when you're on the beach, you can hear strains of accordion and zither â on an English beach, please note, combed by the British Territorial North Sea, with a few miles south, jutting out spiderily, the pale iron-work of an English resort pier, where there will be Bingo Tonite and every Nite, throughout the season, and imitation food is being served in imitation restaurants â this hotel, formerly the Grand, lying in a hollow between crumbling brown cliffs, facing east towards Holland and lanes of distant busy ships, English in every red brick, every slate, every sash window, backed by English fields, an English village and the solid unreason of English roads: English, if ever a thing were English, in its apparent sins and virtues, drearily, wearily English, unlikely to be claimed by any other nation; yet in which, Herr Brown, Herr Robinson, Herr Smith, Herr Jones, if you step, you step into a â slightly pre-war â Viennese establishment, with an alpenhorn for tourists to remark on gleaming extensively above the reception-booth, and a smell of floor-polish delicately tempered by a smell of most un-English pastry.

But isn't Mrs Breske an
echte Tochter
of Vienna, born, not like her mother, in Leopoldstadt, but on the right side of the Radetsky Bridge? Second daughter of old Max Tichtel, twenty years chef at Romanoff's, who (poor old man, it is his only pleasure) she visits each year, during the off-season? Yes, yes, and herself a cook, celebrated for strudel pastry, a favourite pupil of Willi Schmidt's (the great Willi, of whom you have heard), doing very well until she married that scapegrace fiddler, Martin Breske, who left her with two children, one a baby, and of whom the less said the better. Oh yes, she is Viennese! Though now she has lived in England so long. Perhaps because she has lived there so long. Her English grows worse every year.

Listen again to the plunking twangle of the zither, the mechanical fluting of the accordion, the rippling laughter of young Trudi Breske â Trudi, so flamboyantly Austrian, china eyes, flaxen hair, always laughing at what men say to her, and they say a great deal â look about you at the eager young waiters, the maids dressed in operetta costumes, the dark, tall-stemmed bottles, beer steins, menus and wine-lists printed in German. What is make-believe? To pretend? But what is Mrs Breske pretending? She creates her Hotel Continental in her own image, and it is what it is. The world she was torn from in 1937 continued with her, because it was her. To her, make-believe was war-time London, deprivation, bombs, foreigners. The real, Vienna, continued eternally in the outward shape of her thickening figure, sprang forth in words, gestures, tears, some little things on the dressing-table. And then, when times changed, when the war was over, when the Nazis left, when the local Gauleiters, who included her uncle, were put behind bars and stripped of their loot, when she went back to Vienna to claim the estate of her dead sister, rightfully hers: lo, there stood a Vienna other than the Vienna of Mrs Breske. What could she do, poor woman, finding herself so denied? Except in her, Vienna had vanished: she was less of a foreigner in London. She found old friends, and cried with them, but it was an effort rather than a relief. Her very daughters spoke German so execrably that they were cheated by shopkeepers, who took them for tourists. Oh, oh, she would never forget her first return visit to Vienna. As soon as she could she collected her money, and cried all the way back to London.

Make-believe? Is it any more than a label for an attitude? A pejorative term used when we are reminded that our own reality is purely relative?

So Mrs Breske, middle-aged, a cook, a Viennese cook, with money left her by her sister, buys an old sea-side hotel, calls it the Hotel Continental, ransacks the Vienna of her dreams, creates about herself the outward image of the cosmos of Edith Breske: not Vienna as it was or is but a Breskeian extension, real, as fire burns is real, false, but no falser, than the beholder's eye. And it pays, pretty well, since Mrs Breske is business, and her daughter, Frieda, she's business, while Trudi is excellent decoration. Trudi will probably marry. Frieda probably won't marry. Trudi is the darling of the guests. Frieda makes out their bills. Trudi is gay, is innocent â it may be too innocent. Frieda is dark and grey-eyed, far from gay, perhaps not so innocent. Mrs Breske, nearing fifty, is not innocent at all. Her husband-less life has always been solaced by regular and mindless love-making. Frieda notices, but says nothing. Trudi apparently doesn't notice. At the moment the newest of the four waiters, Carlo, is taking up Mrs Breske's night cap. Carlo. Carlo Gordini. A dark-eyed waiter from Milan.

Make-believe? A woman with a man has surely some right to be regarded as real?

How to Break a Terrorist by Matthew Alexander
The Spider Inside by Elias Anderson
Alexander Mccall Smith - Isabel Dalhousie 05 by The Comforts of a Muddy Saturday
Cuentos de amor de locura y de muerte by Horacio Quiroga
Two Outta Three (Two Outta Three #1) by S. Briones Lim
No Way to Treat a First Lady by Christopher Buckley
Somebody to Love by Kristan Higgins
Dreamers Often Lie by Jacqueline West
Adventures in Funeral Crashing by Milda Harris
Lamashtu by Paul E. Cooley
Our partner