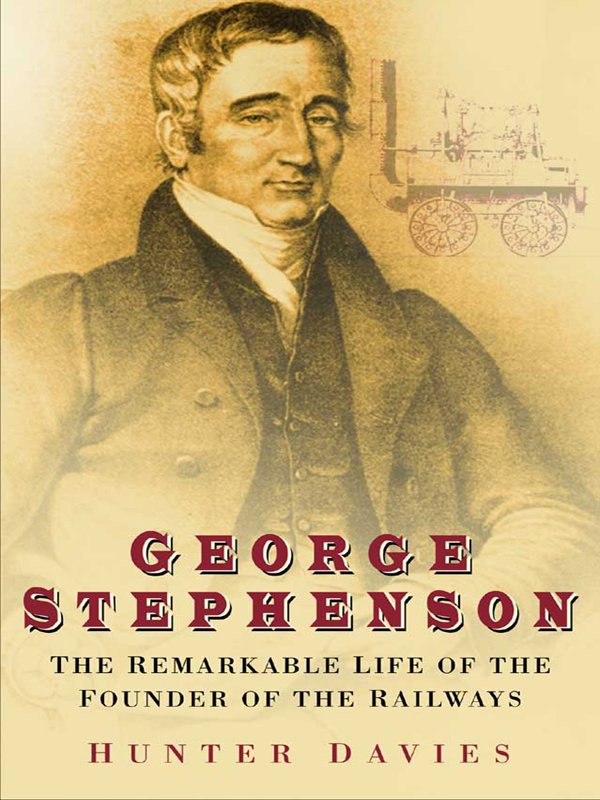 For James Davies of Cambuslang

This book was first published in 1975 by Weidenfeld and Nicolson

The right of Hunter Davies to be identified as the Author of this work has been asserted in accordance with the Copyrights, Designs and Patents Act 1988.

This ebook is copyright material and must not be copied, reproduced, transferred, distributed, leased, licensed or publicly performed or used in any way except as specifically permitted in writing by the publishers, as allowed under the terms and conditions under which it was purchased or as strictly permitted by applicable copyright law. Any unauthorised distribution or use of this text may be a direct infringement of the author's and publisher's rights, and those responsible may be liable in law accordingly.

I
am grateful to Professor Jack Simmons of Leicester University for his help and advice and most of all for agreeing to read through the finished manuscript; to Lord Wardington for access to his collection of books about the Pease family; to Herbert Simon for endless encouragement; to the librarians, staff and officials at Darlington, Newcastle, Liverpool and Chesterfield public libraries; and at the Institution of Mechanical Engineers, the Science Museum and the Public Records Office, and all others who made railway and other documents available, and gave willingly of their time. I am also grateful to all those who gave me permission to reproduce material. Not forgetting Samuel Smiles for all his good work.

G
eorge Stephenson was one of the greatest ever Britons. Such claims are often wildly thrown around, and not always sustainable or deserved, but there are not many people about whom it can be said that he changed the world into which he was born â literally. As the Father of Railways, George Stephenson left the world a totally different place. Since the dawn of civilisation, man had moved at the speed of the fastest horse. After Stephenson, life on the planet was never the same again. Motor cars, aeroplanes, space rockets, might have come along since, and gone faster, further, but mechanical transportation began with the railways.

Railways affected everything. People lived differently, worked differently, ate differently, had holidays differently. Suburbs were created because people no longer needed to live on top of their work. Fresh fruit and vegetables could be brought hundreds of miles. The Grand Tour for the nobs or a day trip to the seaside for the workers was open to everyone who could afford the fare. The original railways were steam fired, but they created an early form of the electric village, in that communications expanded, local times were standardised into one national time, people were brought nearer to each other, the world began to shrink.

Would railways have arrived without Stephenson? Probably, in due course, but he was the single most important element. He did not invent the locomotive engine â no one person can truly take the credit for that â but he was the one who created railways in the sense that he perfected the primitive locomotive engines, got them to run on rails which no one had successfully done before, carved out the routes, laid down the tracks, built the bridges, and created the world's first passenger railway.

He didn't even make the top twenty in a recent poll which the BBC ran to find the Greatest Britons. His great rival Isambard Kingdom Brunel, who was far less influential in the birth of railways, did much better, being voted number two, behind Winston Churchill. Brunel, for some reason, has increasingly emerged over the decades as a much more glamourous figure. He did wear that awful distinctive stove pipe hat, which has helped his image and identification. He was also educated, son of a famous knighted father, southern born and polished while Stephenson was uneducated, Northern and rough.

This biography of Stephenson first came out in 1975 and has been out of print for the last fifteen years or so, much of course to my personal fury. But I see it as part of a wider slur. The book was meant for the general public, accessible to all, even for those with little technical knowledge or interest. There hasn't been another general biography of him since that time, as far as I can gather, looking on the internet, checking in Waterstones, though there has been a good biography of his son Robert.

Part of the problem is that the literary and publishing establishment appears more interested in memoirs of minor literary or aristocratic figures from the Victorian age than its great engineers. You can more easily be commissioned to do yet another biography of Wordsworth, which I myself have done, than any of our great scientists, inventors and engineers. Most of our writers, publishers and literary editors are roughly from the same mould, with an English degree or similar, so they know all about Wordsworth, but try to interest them in a Victorian engineer who never went to school and their eyes are liable to go glazed.

And yet over the years, while this book has been out of print, I have had so many requests for it. Colin Welland, who wrote
Chariots of Fire
, came to talk to me about him, very excited at the possibilities of a George Stephenson film. There are some dramatic visual events in Stephenson's life, as you will discover, such as the death of a famous person at the opening of the Liverpool-Manchester Railway. Some great rows, family feuds, a brilliant baddy in George Hudson, and you could work up the romantic angle with the ever so pretty Fanny Kemble. It could make another British blockbuster for Hollywood, or not. As I write nothing has happened.

I then had a visit from the actor Jimmy Nail, the star of
Auf Wiedersen Pet
, who was very keen to do a TV series about Stephenson, with himself, being a fellow Geordie, as George. That project too seems to be dormant, if not dead.

I also had a visit from the novelist Ken Follett, who was researching a novel set in Victorian England which had a railway element and wanted to know more about Stephenson. That did come out.

When people do the smallest bit of research about life today, in what we like to think are modern times, they soon realise that the birth of railways, though it happened over 175 years ago, had effects and repercussions which are still with us now. And if they do a little more digging, they will discover that there were some larger than life figures behind the creation and development of railways, notably George Stephenson.

I must admit I knew very little about George Stephenson when I first started this book. I suppose I must have learnt about him at school, then I forgot about him.

In 1972 I was walking Hadrian's Wall and went to look at Newburn Church, a few miles west of Newcastle, to inspect their Roman remains. Like so many buildings either side of the Wall, it contains stones stolen from Hadrian's Wall. In the records of the church, I saw that George Stephenson had been married there, not just once but twice. They don't teach you about people's marriages at schools.

From then onwards I kept coming across George's tracks, literally and metaphorically, following the railway lines from Newcastle, following the road that
Rocket
took on its way to Liverpool for the Rainhill Trials and wondering constantly about what sort of man George Stephenson must have been, and not just because he'd been married twice. In reading about him, I discovered a third marriage, but all of them red herrings, at least as far as scandalous stories were concerned.

In Carlisle I read old railway records about the days when there were seven rival railway companies in the town, all fighting for passengers, and I began to realise the extent of Railway Mania. I read up on the history of other towns and their railways, about the dramas and passions aroused by the arrival of railways. I hadn't really realised that in such a short space of time railways had not only arisen from almost nowhere but spread across the face of the world. All of it, or a great deal of it, was due to George Stephenson. I wanted to find out more about him. Not just his railways and his engines but about George Stephenson, the man.

I spent three years retracing his steps, trying to piece together the elements that formed his character, reading his letters, looking for clues to his actions, attempting to build a picture of him as a human being. Over the previous 150 years his railways had been exhaustively written about, yet the man himself had remained a shadowy figure. Samuel Smiles, in his great biography of Stephenson in 1857, attributed most of the known virtues to him, leaving unstated the many faults which his enemies certainly felt he had, and turned him into a Victorian legend. Since Victorian times, almost every writer on the subject of railways has been specifically a
railway
writer, an expert writing mainly for other experts, not primarily concerned with the home life of their heroes or even how they felt as they saw their creations cover the world. It was a difficult job to find George Stephenson's feelings. His letters, for reasons which will be explained, tell little, but even this has been largely ignored by railway writers.

As an outsider, I did not enter into arguments or even discussions about gauges and blasts and tubular boilers. I have kept railway technicalities to the minimum but I hope this attempt at a biography, though meant for the general reader, will perhaps throw some new light on the personality of the Father of Railways which railway fans might have missed.

Since the book came out, railways themselves have been disappearing fast as the process of closing branch lines, accelerated by Dr Beeching in the 1960s, came to a climax. In 1948, when British Rail was born, it inherited roughly 19,000 route miles. Today, when British Rail has long gone and we are back to a handful of independent railway operators, for the moment anyway, there are only 10,000 miles. So 9,000 miles of track have vanished. One good side effect of this has been the appearance of new walks and cycle tracks, all over the country, converted from old railway lines.