Read Georgia on My Mind and Other Places Online

Georgia on My Mind and Other Places 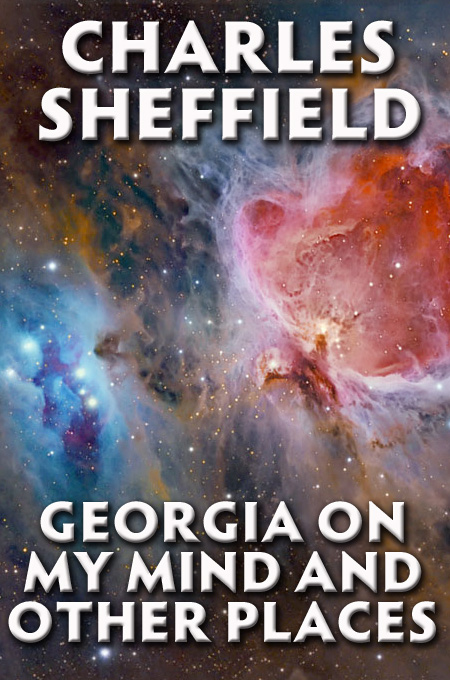 GEORGIA ON MY MIND AND OTHER PLACES

This is a work of fiction. All the characters and events portrayed in this book are fictional, and any resemblance to real people or incidents is purely coincidental.
Copyright © 1995 by Charles Sheffield
All rights reserved, including the right to reproduce this book or portions thereof in any form.
Baen Publishing Enterprises
P.O. Box 1403
Riverdale, NY 10471
www.baen.com
eISBN: 978-1-61824-063-7

GEORGIA ON MY MIND AND OTHER PLACES
copyright © 1995 by Charles Sheffield.

This book contains fourteen stories written over the past nine years. They range in length from short offerings of little more than a page (“Millennium,” “That Strain Again . . .”) to long novelettes (“Georgia on My Mind”). They also range in mood from silly to personal and serious.

If you have read any of my previous collections of short stories you will not be expecting much more than this by way of introduction. I see little point in talking about stories before you read them, because no matter what I say each one has to stand or fall on its merits. Introductory words, by me or anyone else, can’t change that.

However, I do think that it is nice to give each story its own short afterword, saying how it came to be written and what I was trying to do in it. Then you can judge if I succeeded or failed.

I have one other comment, addressed to any reader worried about the repackaging of old material under a new title: I have published five other collections of short stories,
Dancing with Myself
,
One Man’s Universe
(which, to avoid confusion, I will point out is an expanded version of
The McAndrew Chronicles)
,
Erasmus Magister
,
Vectors
, and
Hidden Variables.
None of these stories has ever appeared before in collected form other than in Best-of-the-Year anthologies, and there is no overlap of material between this book and my other five story collections.

T
he worm in the apple; the crab in the walnut
. . . Colin Trantham was adding fine black bristles to the crab’s jointed legs when the nurse called him into the office.

He glanced at his watch as he entered. “An hour and a quarter the first time. Forty minutes the second. Now he sees me in nine minutes. Are you trying to tell me something?”

The nurse did not reply, and Dr. James Wollaston, a pudgy fifty-year-old with a small mouth and the face of a petulant baby, did not smile. He gestured to a chair, and waited until Trantham was seated on the other side of his desk.

“Let me dispose of the main point, then we can chat.” Wollaston was totally lacking in bedside manner, which was one of the reasons that Colin Trantham liked him. “We have one more test result to come, but there’s little doubt as to what it will show. You have a tumor in your left occipital lobe. That’s the bad news. The good news is that it’s quite operable.”

“Sorry.
Completely
operable. We should get the whole thing.” He stared at Trantham. “You don’t seem surprised by this.”

Colin pushed the drawing across the table: the beautifully detailed little crab, sitting in one end of the shelled walnut. “I’m not an idiot. I’ve been reading and thinking cancer for weeks. I suppose it’s too much to hope it might be benign?”

“I’m afraid not. It is malignant. But it appears to be a primary site. There are no other signs of tumors anywhere in your body.”

“Wonderful. So I only have cancer
once
.” Trantham folded the drawing and tucked it away in his jacket breast pocket. “Am I supposed to be pleased?”

Wollaston did not answer. He was consulting a desk calendar and comparing it with a typed sheet. “Friday is the twenty-third. I would like you in the night before, so we can operate early.”

“I was supposed to go to Toronto this weekend. I have to sign a contract for a set of interior murals.”

“Postpone it for four weeks.” Wollaston was pulling another folder from the side drawer of his desk. “I propose to get you Hugo Hemsley. He and I have already talked. He’s the best surgeon east of the Rockies, but he has his little ways. He’ll want to know every symptom you’ve had from day one before he’ll pick up a scalpel. How’s the headache?”

The neurologist’s calm was damping Colin’s internal hysteria. “About the same. Worst in the morning.”

“That is typical. Your first symptom was colored lights across your field of vision, sixty-three days ago. Describe that to me....”

The muffled thump on the door was perfunctory, a relic of the days when Colin Trantham had a live-in girlfriend. Julia Trantham entered with a case in one hand and a loaded paper bag held to her chest with the other, pushing the door open with her foot and backing through.

“Grab this before I drop it.” She turned and nodded down at the bag. “Bought it before I thought to ask. You allowed to drink?”

“I didn’t ask, either.” Colin examined the label on the bottle. “Moving up in the world. You don’t get a
Grands Echézeaux
of this vintage for less than sixty bucks.”

“Seventy-two plus tax. When did you memorize the wine catalog?”

“I’m feeling bright these days. When a man knows he is to be hanged in a fortnight, it concentrates his mind wonderfully.”

“No points for that. Everybody quotes Johnson.” Julia Trantham pulled the cork and sniffed it, while her brother was reaching up into the cabinet for two eight-ounce glasses.

“You’re late.” Colin Trantham placed the thin-stemmed goblets on the table and watched as Julia poured, a thin stream of dark red wine. His sister’s face was calm, but the tremor in her hand was not. “The plane was on time. You went to see Wollaston, didn’t you, before you came here?”

“You’re too smart for your own good. I did.”

“What did you find out?”

Julia Trantham took a deep breath. Colin had always been able to see through her lies, it would be a mistake to try one now. “It’s a glioblastoma. A neuroglial cell tumor. And it’s Type Four. Which means—”

“I know what it means. As malignant as you can get.” Colin Trantham picked up his glass, emptied it in four gulps, and walked over to stand at the sink and stare out of the kitchen window. “Christ. You still have the knack of getting the truth out of people, don’t you? I had my little interview with Dr. Hemsley, but he didn’t get as honest as that. He talked
procedure
. Day after tomorrow he saws open my skull, digs in between the hemispheres, and cuts out a lump of my brain as big as a tennis ball. Local anesthetic—he wants me conscious while he operates.”

“Probably wants you to hold tools for him. Like helping to change a car tire. Sounds minor.”

“Minor for
him
. He gets five thousand bucks for a morning’s work. And it’s not
his
brain.”

“Minor operation equals operation on somebody else.”

“One point for that. Wish it weren’t
my
brain, either. It’s my second favorite organ.”

“No points—that’s Woody Allen in
Sleeper
. You’re all quotes today.”

The casual brother-sister jousting shattered and fell away from between them like a brittle screen. Julia Trantham dropped into the seat opposite. “I know, Colin. It’s not easy. It’s awful. My fault. I’m not handling this well.”

“Not your fault. Everybody’s. Mine too, same problem. You go through life, build your social responses. Then you get a situation they just don’t cover. Who wants to talk about
dying
, for Christ’s sake?” There was a long silence, but the tension was gone. Colin Trantham stared at his older sister’s familiar face, unseen for half a year. “I’m scared, Julie. I lie awake at night, and I think, I won’t make old bones.”

Little brother, hurt and crying. We’re grown-ups now. We haven’t hugged in twenty years.
“Social responses. I’m supposed to say, don’t be scared, Col, you’ll be fine. But while I say it I’m thinking, you’re
scared
, no shit? Of course you’re scared. Me, I’d be petrified. I
am
petrified.”

“Will you stay until the operation’s over?”

“I was planning to. If it’s all right with you, I’ll hang around until you’re out of the hospital. Write up a paper on extinct invertebrates that I’ve had in the mill for a while.” She poured again into both glasses, emptying the bottle. “Any girlfriend that I need to know about, before I embarrass her by my drying panty hose?”

“Rachel. Just a now-and-again thing.” Colin Trantham picked up the empty bottle and stared at the layer of sediment left in the bottom, divining his future. “Should we have decanted it? I hardly tasted that first glass. I’ll try to sip it this time with due reverence.” The raw emotion was fading, the fence of casual responses moving back into position. “No problem with Rachel. If she finds you here with me I’ll just pretend you’re my sister.”

The waiting room was empty. Julia dithered on the threshold, possessed by conflicting desires. She wanted news, as soon as it was available. She also wanted a cigarette, more than she had ever wanted one, but smoking was forbidden anywhere in the hospital.

Dr. Wollaston solved her problem before she could. He approached along the corridor behind her and spoke at once: “Good news. It went as well as it possibly could go.”

The nicotine urge was blotted out by a rush of relief.

“Minimum time in the operating room,” the neurologist went on. “No complications.” He actually summoned a smile. “Sedated now, but he wanted you to see this. He said that you would know exactly what it means.”

He held out a piece of paper about five inches square. At its center, in blue ink, a little figure of a hedgehog leered out at Julia, cheeks bulging. She could feel her own cheeks burning. “That’s me—according to Colin. Private family joke.”

“Drawn right
after
the operation, when Hemsley was testing motor skills. Astonishing, I thought.”

“If you wish, although he might not recognize you at the moment. He should be sleeping. Also”—a second of hesitation, picking words carefully—“I would appreciate a few minutes of your time. Perhaps a glass of wine, after what I know has been a trying day for you. This is”—Julia sensed another infinitesimal pause—“primarily medical matters. I need to talk to you about your brother.”

How could she refuse? Walking to the wine bar, Julia realized that he had talked her out of seeing Colin, without seeming to do so. Typical James Wollaston, according to Colin. Gruff, sometimes grumpy; but smart.

His eyes were on her as they settled in on the cushioned round stools across a fake hogshead table, and she took out and lit a cigarette.

“Five or six.” Julia took one puff and laid down the burning cigarette in the ashtray. “Except I’m like every other person who smokes five—a pack lasts me a day and a half.”

“You’re going to regret it. It’s murder on your skin. Another ten years and you’ll look like a prune.”

“Skin? I thought you were going to tell me about my heart and lungs.”

“For maximum effect, you have to hit where it’s least expected. You ought to give it up.”

“I was going to. I really was. But you know what happened? Since Mother died, Colin and I have called each other every week.”