Read Get Her Back (Demontech) Online 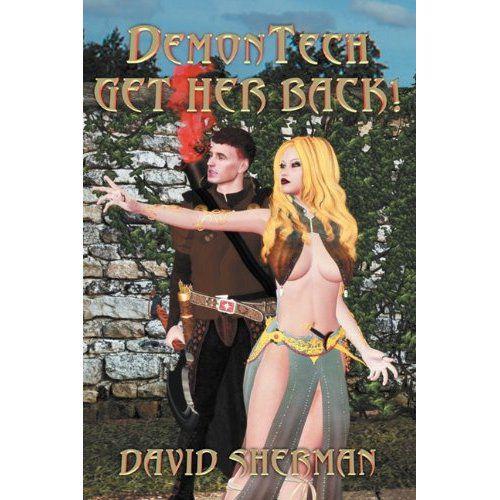 DemonTech is a series of military science fantasy novels where demons have been tamed and utilized in ways that mirror technology as we know it, particularly of a military nature. These demons may be visible or invisible and specific abilities they possess allow them to assume the function of many conventional tools with superior results, though they do require specially trained personnel to manage them.

In An Iron Cage
:

The Magic of Steampunk

Knives in the Night

Out of the Fire

A Rock and a Hard Place

There I Was: The War of Corporal Henry J Morris

A division of Dark Quest Books

For my nephew, Tom,

It’s well past time you got one

DTF Publications, a division of

All rights reserved. No part of the contents of this book may be reproduced or transmitted in any form or by any means without the written permission of the publisher.

III
-
All the Way Home

Startled, the newly arrived refugee jerked around to look toward the demanding voice. He blinked at the sight that met his eyes—a magnificently beautiful woman, golden from crown to toe. The spun-gold color of her hair, the amber of her eyes, and the honey-sunshine glow of her copiously exposed skin combined to deceive the eye into seeing her clothing as golden as well, although she wore nothing of gold. The fillet that held her hair in place was a simple leather strip. The short vest that didn’t quite close between her breasts, and the pantaloons that hugged her hips so low as to leave her entire midriff open to the air before billowing gracefully about her legs were all a parti-colored patchwork.

“L-Lady!” the refugee stammered. Even though no lady he’d ever caught a glimpse of dressed so like a houri, this woman’s bearing was such that she could only be a lady. He snatched his cap from his head and held it crushed in his hands. “I said—I said that I heard the music of a sothar before I escaped from the Desert Nomads’ camp.”

The golden woman thrust her face close to his. “Did you
see
the musician? Was he with a dancer?”

The refugee took an involuntary step backward. “N-No, Lady.      I only heard the music.”

The woman stepped forward to keep her face close to his. “Did you see a dancer with this musician?” she repeated.

“Then how do you know it was a sothar that you heard?” she  demanded, staying close to intimidate the man.

“I-I’m a merchant seaman, Lady. One time my s-ship made port in Frangeria. I saw a Djerwolh dancer, and heard her musician.  Sh-She,” he took two brisk steps back so he could look more widely at this woman, “she looked a lot like you, only her clothes were gold.” His face reddened as he contrasted the lady’s splendid patchwork with his own seaman’s rags.

The woman stood erect and stared hard at the refugee. After a short moment she demanded, “Where is the Desert Nomads’ camp that you escaped from?”

The refugee swallowed. “In the High Desert. Three or four days walk from here. Maybe more. I wasn’t keeping track of how long I ran.” He swallowed again. “I ran and walked, and napped when I found safe places to stop.” He shook his head. “I can’t even say how many times I ate, I only ate what little I could grab as I ran.”

“I don’t care how many times you ate,” she snapped. “I want you to tell me where the camp is!”

The seaman swallowed. “I think th-three or four days w-west of here.”

“Then you will guide me to the place. Prepare to leave at first light.” The woman, Alyline, also called “the Golden Girl,” spun on her heel and strode toward the wagon that held her belongings.

The refugee looked after her, gape-mouthed, for a long moment, then spun around and ran, looking for a hiding place. There was no way he was going to return to the camp of the fierce nomads of the High Desert.