Read Getting to the Church On Time Online 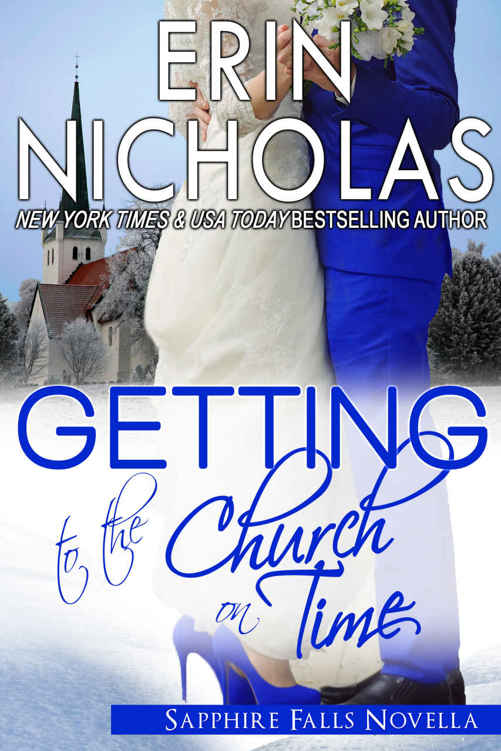 WARNING
: If you’re new to the series, this is *not* the story to start with.
Everyone
in the series is mentioned and interact and, well, it’s crazy fun for fans of the series but will be pretty confusing to newcomers. Also, there are spoilers. So, if you want to take a holiday trip to Sapphire Falls for the first time, check out
Getting In the Spirit
, the first Sapphire Falls Christmas novella! Happy reading!

It’s just days before Christmas, almost a year since Levi Spencer and Kate Leggot accidentally fell in love in Sapphire Falls, and they want to make it official. Surrounded by friends and family in their adopted hometown, Kate and Levi will marry and celebrate in the town square where they shared their first kiss. It will be absolutely perfect…

Except for the massive snowstorm about to hit town.

Now, thanks to Jack Frost and multiple flight cancellations, Levi and Kate are separated by hundreds of miles. It looks like all the wedding preparations will go to waste.

But Sapphire Falls always looks on the bright side. And they don’t cancel a perfectly good party, even for Jack Frost.

There will be a wedding…the only question is
who
will be walking down the aisle?

No part of this book, with the exception of brief quotations for book reviews or critical articles, may be reproduced or transmitted in any form or by an means, electronic or mechanical, including photocopying, recording, or by any information storage and retrieval system without express written permission from the author.

This is a work of fiction. Names, characters, places, and incidents are the product of the author’s imagination or are used fictitiously, and any resemblance to actual persons, living or dead, business establishments, events, or locales is entirely coincidental.

To my family, immediate and extended, you’re the reason the holidays mean so much to me!

And to the fans… Sapphire Falls would still just be a place in my imagination without you. It might still be fictional, but you’ve all made it a very real place to me! This is for you! Crazy-goofy-Christmas-wedding-fun, Sapphire Falls style!

“Sometimes the snow here is so white and pure that it looks almost blue in the morning sun.”

“And the way the Christmas lights reflect off the snow is so beautiful at night.”

“And it’s just not Christmas without snow. We haven’t had any so far and we were all so worried we couldn’t even do the sleigh rides.”

Kate Leggot stood at the window of Scott’s Sweet Shop watching the biggest, fluffiest snowflakes she’d ever seen descend upon the Sapphire Falls town square…and trying not to cry.

What else could anyone say other than “I’m sorry”? It was no one’s fault that the biggest snowstorm in three years was now descending on Sapphire Falls. The day before she was supposed to be married. While her fiancé was in Las Vegas.

“Maybe he’ll get here. It’s not supposed to get bad until later today.”

Kate turned to face Adrianne Riley, the owner of the shop and one her closest friends. “He’s not supposed to leave Vegas until tonight. He has meetings until around nine.”

“Why did he go to Vegas right before the wedding again?” Adrianne asked

“Well, considering we decided to get married a week ago, the trip to Vegas was planned first,” Kate said. She smiled in spite of the situation. It was just like Levi to spontaneously propose and assume that planning a wedding for the following week was no big deal.

Then again, very little was a big deal for Levi. He was perpetually optimistic…and had millions of dollars at his disposal. Almost anything could be done with a good attitude and cash.

Or so she’d learned in the one-day-short-of-a-year of knowing and loving him.

The playboy millionaire she’d fallen for had told her once that he hadn’t always been the positive-outlook type. But she had a hard time believing that. Levi was fun-loving and charming. He loved to laugh, he loved to spoil her and he loved to make the town ooh and aah over the things he could do for them. He’d fallen head over heels for the little Nebraska town as quickly as he had for Kate. It was almost impossible to imagine him as anything other than the throw-himself-into-everything-one-thousand-percent guy that she knew.

Of course, the millions that he loved to spend extravagantly on the town and people he’d grown to love required that he go to Vegas periodically and participate in his family’s business. The Spencer family took having a good time seriously. They’d made it into a multimillion-dollar enterprise, in fact. Entertaining the masses in their casinos and with their touring stage shows and concerts was what they did, and they loved every minute.

“If we don’t get married tomorrow, we’ll do it some other time,” Kate said with a smile.

“But tomorrow is your anniversary,” Phoebe said.

Tomorrow was December twentieth, the day she’d met Levi right here in Sapphire Falls. “Well, we should have thought of that before last week.”

She was really trying to stay positive. The day didn’t matter, their love did, being together did. They could get married whenever he got back from Vegas.

Her life had changed on December twentieth. Everything she’d never realized she’d always wanted had come to her a year ago tomorrow. It had been an accident, a case of mistaken identity, and yet, it felt like the most meant-to-be thing ever.

And yeah, okay, she wanted to get married on the same day she’d met Levi. No, it didn’t
really
matter. No, it wouldn’t make them less married or less in love if they missed it. They could always wait another year to do it if it mattered that much. But…

“I want to go to Vegas,” she suddenly blurted.

“Today. Now. If I go now before the storm gets worse, I can get there before we’re snowed in here. At least Levi and I can be together. We can get married in Vegas.”

“You don’t want to get married in Sapphire Falls?” Adrianne asked.

She looked at the huge wedding cake Adrianne had made for them. It was snow-white, towered six tiers high—you needed a lot of cake when the whole town would be turning out for your reception—and was decorated with Christmas ornaments made from frosting. It would be surrounded by evergreen branches and multicolored lights when it was set up on the table in the gazebo. It was also peppermint flavored for sentimental reasons. It was the perfect Christmas tree wedding cake.

But she wanted to be with Levi more.

“I do,” she said, meaning it. “But I want to get married tomorrow. And I need to be with Levi to do that. And if I have to choose between Levi or Sapphire Falls…I’m going to choose Levi.”

“I’m sorry about the cake.”

“Don’t be,” Adrianne said with a wave of her hand.

“But you spent so much time on it,” Kate said.

“And I loved every minute.” Adrianne enfolded Kate in a hug. “Cake is the last thing you should be worried about.”

Kate hugged her back, so grateful for her friends. She sighed. “I’m also worried about the decorations and the tables that everyone has been working on and the gazebo and…everything. It would all go to waste.”

Levi had wanted to get married by the bench in the town square where they’d first sat and drank hot cocoa and talked…and made out. Then he’d convinced her the reception should be simple…peppermint cake, hot cocoa and an assortment of other peppermint sweets in the gazebo that was at the heart of the town they loved.

She’d talked him out of the wedding in the square. It was December in Nebraska. The chances of snowy, cold weather were about ninety-eight percent. Instead they’d decided to get married in the corner church. But he’d gotten her to compromise on having the reception in the gazebo. He’d argued that so far, snow fall had been nothing more than a pretty dusting and the temperatures had been unseasonably warm. Oh, sure, everyone would still need to bundle up, but no one was risking frostbite to come celebrate with them. And Levi said he was fine with the winter air chasing people back inside after a short time. The sooner their guests dispersed, the sooner they could go home as husband and wife. An indoor reception would have meant hours of drinking, dancing and entertaining.

So, they’d procured dozens of tall white round tables to set on the sidewalks around the gazebo. The delivery truck had rolled into town three days ago. Their friends had been helping tie big red bows onto all of them. Fortunately, the square was already decorated festively with four huge pine trees decked out early in December, five-foot plastic candy canes lining the paths to the gazebo, a life-sized sleigh, a gingerbread house big enough for kids to play in, and car-tire-sized ornaments hanging from the non-evergreen trees. The gazebo was already draped in lights and all they had to do was move the gigantic Santa chair to make room for the cake table.

“You can’t think of it as a waste,” Phoebe told her. “Everyone will understand. The important thing is that you and Levi are happy.”

Kate hugged her arms against her body. “I know. But this is home to us. Getting married
here
meant so much to us.”

“We’ll have a big party when you get back,” Adrianne promised.

“And this
is
home. Forever,” Phoebe said. “That won’t change.”

Kate smiled and nodded. “I know.”

The door to the shop blew open, the bell overhead tinkling merrily. “Wow, it’s really coming down,” Lauren Bennett, another good friend, announced as she came in, stomping the powdery snow from her boots.

This was home. A little piece of her heart ached that she and Levi wouldn’t say their vows here, with all of their friends, and wouldn’t start their first night together in their house in Sapphire Falls. That was her dream. The huge snowflakes outside would have been gorgeous…if she was curled up in front of the fireplace at home with her husband.

But those snowflakes were keeping them apart.

Unless she took control.

“I need to go.” She turned toward the door. She couldn’t wait any longer. For one, the snow would continue to pile up. For another, she needed to feel as if she was
doing
something. Sitting around and watching her wedding plans get covered by snow was not good for her mental health.

She glanced back at Phoebe. “What?”

“She’ll stay with Mom and Dad. It’s fine,” Phoebe said. “Joe and I are the best man and maid of honor. We have to go with you.”

Kate felt tears stinging her eyes. “I’m not going to argue. I’d love for you to come.”

“Then let’s go. I’ll have Joe get their plane while we pack.”

Kate had to admit that there were perks to being engaged to a millionaire. The private plane was one of them.

Kate grabbed Phoebe and hugged her. “Thanks.”

“Where are you going?” Lauren wanted to know.

the Complete Western Stories Of Elmore Leonard (2004) by Leonard, Elmore
Secret of the White Rose by Stefanie Pintoff
Dan by Joanna Ruocco
Boreal and John Grey Season 2 by Thoma, Chrystalla
Owned By The Alphas: Part Five by Faleena Hopkins
Double Deuce by Robert B. Parker
The Horror in the Museum by H. P. Lovecraft
Imminent Conquest by Aurora Rose Lynn
Chester Himes by James Sallis
The Blythes Are Quoted by L. M. Montgomery
Our partner