Read Ghosts of Graveyards Past Online

Ghosts of Graveyards Past 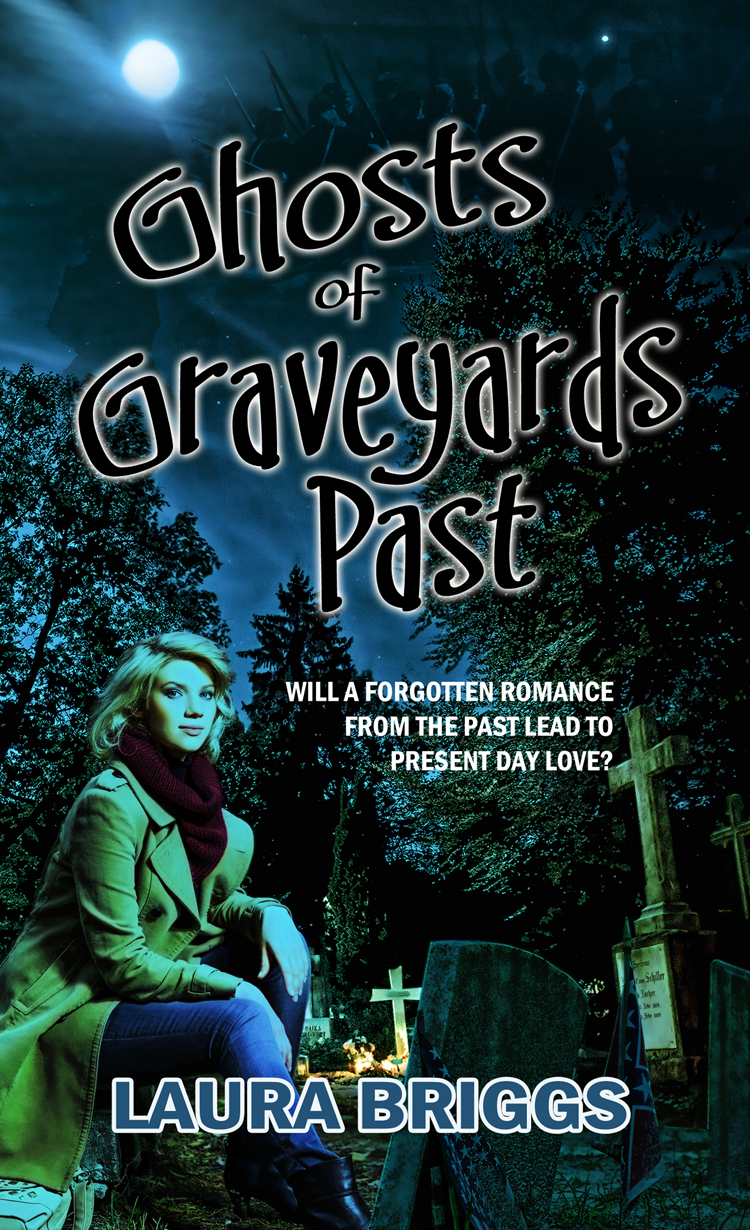 GHOSTS OF GRAVEYARDS PAST

This is a work of fiction. Names, characters, places, and incidents either are the product of the author's imagination or are used fictitiously, and any resemblance to actual persons living or dead, business establishments, events, or locales, is entirely coincidental.

GHOSTS OF GRAVEYARDS PAST

For Mary, whose love for history has inspired more than one story.

Ghosts of Romances Past

5 out of 5 P's~ When this book came up for review, I knew I just had to read it and I would love it to piecesâ¦Laura did a wonderful job in living up to the renditions of the âGhost Tale'

5 out of 5 Hearts~ The plot was refreshing, the pace was good and I hated to see the story come to an end.

4 out of 5 stars~ Author Laura Briggs does a wonderful job drawing out her characters and, even though this story is short, we get a really good view of what the future holds for Adelle and Brandon

It was mid-October, with crimson and yellow leaves curling away from branches on trees that lined the highway. Ignoring the chill in the air, Jenna Cade lowered the rental car's windows. The cool breeze fanned strands of gold hair before her eyes and rustled the map beside her in the passenger seat. Her destination, a rural town in Alabama, had been circled in red.

Three months and four states had slipped past since Jenna first began her journey. Not a pleasure trip, but a tour in search of the Deep South's forgotten burial groundsâcemeteries dating back hundreds of years, somehow lost in the fray of time and property development, their existence little more than lore to those living around them.

Such gravestones were scattered across wooded hollows, remote pastures lands, even the muddy banks of a swamp. Hallowed grounds haunted by nothing and no one, Jenna's feet the first to tread their soil in decades for all she knew.

”Dead Cemeteries,” as her agent, Joyce Edel, referred to them.

Jenna preferred the less macabre
Stories Behind the Stones,
a title penciled in the notes of her work portfolio. Its pages bulged with material from visits to sites in Georgia, Tennessee, and Mississippi. Photographs and gravestone rubbings mostly, her observations recorded on a handheld device she kept in her knapsack.

At night, she played back the recordings as she typed a first draft. Her voice sounding tinny and faraway on the machine, a breathless quality as she noted, “There's a face sculpted into this marbleâa woman's face. Young features, a wide mouth and oval eyesâ¦”

Other oddities greeted her past the acres of brush and bramble. In one place, the hollowed shell of an old church watched over the monuments, its stone foundation the only part untouched by the flames of a past fire.

“How does this even happen?” her agent asked, reading over the materials Jenna e-mailed from the weeks she spent on the road. “It's like these people just got erased from history, like no one even remembers them. They've justâdisappeared.”

“I know,” said Jenna, the same photos spread before her on the bed. She had never seen anything look so desolate, even when researching a manuscript for the communities rendered ghost towns by the railroad deals. She had dug broken pottery and arrowheads from the dust of former Native American villages, but this was her first time to unearth someone's headstone from a deserted landscape.

She tried to imagine her own grave in some isolated wood someday, thorn plants tangled round the moss-encrusted stone. Unlikely, considering the Cade family's attentive nature for previous generations, with family burial plots and with memorial and decoration days observed every year since she could remember.

But then, hadn't someone cared for these individuals, as well?

“Most cemeteries aren't on the tax roll,” a city official had explained the first time she phoned to report a neglected burial site. “If the legal descendants are dead or untraceable, the city may supervise a grant for maintenance. Otherwise, it's up to the community to find the money and resources.”

It was this last option Jenna hoped the book would set in motion. If she could put a story with the stones, then readers might feel a connection to neglected cemeteries in their towns and neighborhoods.

But how did one describe a stranger's heart or capture the tone of a voice long since faded from any ear? The answer evaded her as she crushed carpets of poison ivy to find just a pile of rocks for a marker or sometimes deep impressions in the earth where a grave may or may not be planted.

Babies' graves were the easiest to identify. She knew them by the sight of a lamb's shape etched into the surface, or sometimes a single flower severed from the stem. A broken sword might represent a youth cut down in his prime, a broken branch the same.

Slave cemeteries, she learned, were nearly impossible to document. The few inscriptions were chipped away by harsh elements, the limestone crumbling beneath a green film no amount of scrubbing would ever remove. There had been one in Mississippiâa boggy strip of acreage known among the locals as Angel's Passâwhere the tombs were half-swallowed by greedy, spongy brown earth.

Jenna's boots sank, her knees caked with mud as she knelt to examine the damaged markers. Even the ones lacking names bore traces of a design, or maybe a special curve in the stone's shape. Proof that someone, somewhere, had once cared.

Such markers were too fragile to withstand even the gentlest of gravestone rubbings, the stone yielding a hollow sound when she tapped it with a pencil. She photographed them instead, angling mirrors to slant the sunlight so it bathed the carved portions in shadow. That was an old trick, one safer than brushing the cracks with flour, or wrapping the stone in tin foil to make an imprint.

“Believe in ghosts?” more than one person asked whenever she spoke of the project in the towns surrounding the cemeteries. Their mouths would quirk in a sly smile as they waited for her response.

The answer was always the same: a firm “No,” a shake of the head, and a faint laugh. Her fingers instinctively moved to the silver cross around her neck, a graduation gift from her parents when she left their family home for the university in Annapolis.

Faith in her Heavenly Father had long ago replaced any childish fears she might have harbored for phantom visitors stealing between this world and the next. These days, her sole fascination lay with how the people lived before the flesh had wasted into bone, and, from there, into dust.

The cemetery at Sylvan Spring was almost a ghost in its own right.

At least, that was the slant the newspaper story had taken. Filed among Jenna's research papers, the article was dated eight years back, and focused on the stretch of woods that bordered the rural Alabama town.

Hikers who braved its paths in search of the spring had claimed to see old headstones planted among the acres of foliage. None could ever find the cemetery a second time, and accounts of where it had been seen varied so much that the article's writer chose to call it a ”ghostly encounter,” the stones appearing and vanishing as mysteriously as a phantom.

Her agent was certainly far from convinced, reminding her that the publisher was adamant; the upcoming New Orleans site had to be a prominent feature. “Take a week, maybe ten days, and check this place out,” Joyce told her, “but rememberâthere's no time for detours. No second guesses, especially when the site in Louisiana is a sure thing. “

A graveyard with a confirmed location, and volunteers already on site to help with the genealogical research. This was the silent implication of her agent's words.

“Ten days,” Jenna agreed, her gaze falling on the destination circled in red. Less than eighty miles of country road remained between herself and the truth of her latest search.

Dusk arrived ahead of her, bathing the town in a soft glow. She had expected to find a tourist trap after reading about the local spring, but there were no spa centers among the collection of buildings that slid past her windshield. There were churches of different denominations and a prayer chapel with stained glass. Also, a tarot card reader, whose cottage-like building seemed to hunker in the shadows, its porch banisters swathed in kudzu vine.

More businesses caught her eye: a crystal and candle emporium named Moonspell, a custom-design jewelry store, and a pottery shop with local goods on display. The strains of a live folk band echoed from the open door of a pub-themed restaurant on the corner.

Her accommodation for the week, a historic inn, was located at the end of the square. She parked before the white-washed structure her agent had called “old-fashioned and overpriced,” when she booked the room on her client's behalf.

Jenna conceded the first part of the statement, her gaze taking in three stories of gables and balconies and the trellis with its mask of purple wisteria. A black-wrought-iron fence hugged the corner, hinting at a possible flower garden in the back.

As she climbed from the car, something else caught her eye: a banner flapping in the breeze between two lampposts. The words,
Ye Old Hallowed Days Festival
had been formed in curving script, a date given for the following weekend.

Painted below was a series of strange shapes. Triple spirals and interlocked circles, an intricate set of knots that formed a shield. A Renaissance festival was her first guess, or something of a medieval nature. Maybe some sort of Halloween celebration, given this time of year.

It was likely to be the last one, yet something about the symbol seemed ancient, almost pagan-like. Her mind flew to the card reader's business and the shop of crystals and mineral rocks. At a glance, this place seemed to offer as much to New Age crowds as it did to the Christian congregation.

Inside, she questioned the clerk about it as they checked her reservation.

“Oh, the Celtic thing,” said the girl, scarcely younger than Jenna, hair bleached blond and in short spikes, a piercing in her left nostril. “Yeah, it has to do with the county's heritage society. They thought it up decades ago to keep town history alive, but it's grown since then. Games and booths and stuff like that were added to it.”

“Is it supposed to be for Halloween?” Jenna guessed. Perhaps the celebration was only a harmless fall-themed cultural festival with no connection to the hints of occult dabbling she'd seen elsewhere in the town. She was curious to know the truth.

The Search for Sam by Pittacus Lore
The Fly Boys by T. E. Cruise
The Magic Meadow by Alexander Key
Barnstorm by Page, Wayne;
Carpathian by David Lynn Golemon
He Who Dares: Book Two (The Gray Chronicals 2) by Rob Buckman
Knight of a Trillion Stars by Dara Joy
Love's Rhythm by Lexxie Couper
Never Go Home by L.T. Ryan
Deal with the Dead by Les Standiford
Our partner