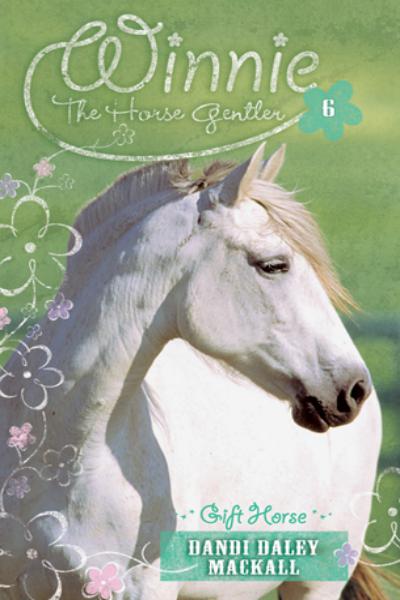 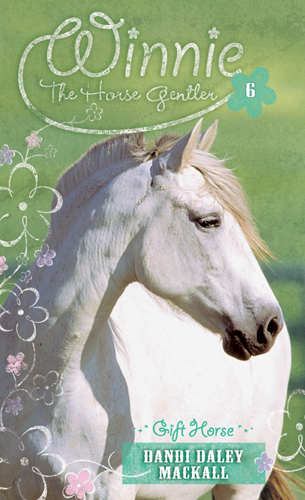 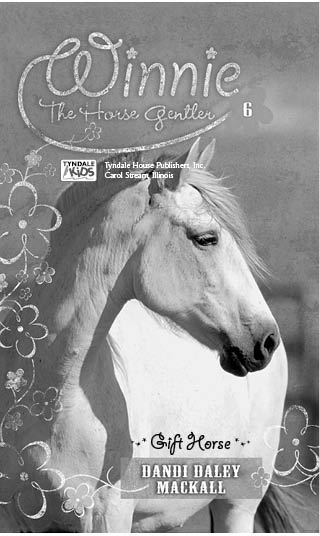 Visit Tyndale's exciting Web site for kids at www.tyndale.com/kids and the Winnie the Horse Gentler Web site at www.winniethehorsegentler.com.

You can contact Dandi Daley Mackall through her Web site at

This novel is a work of fiction. Names, characters, places, and incidents either are the product of the author's imagination or are used fictitiously. Any resemblance to actual events, locales, organizations, or persons, living or dead, is entirely coincidental and beyond the intent of either the author or publisher.

For manufacturing information regarding this product, please call 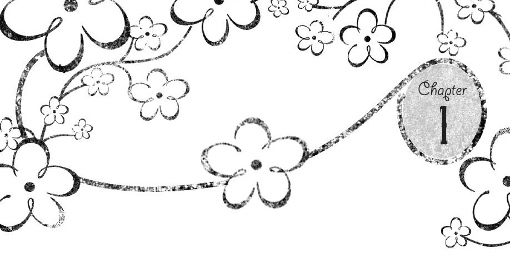 I watched as my buddy Hawk, a.k.a. Victoria Hawkins to her popular friends, led Towaco, her Appaloosa, out of my barn. Frost puffed from his nostrils. Snow dusted Hawk's dad's new trailer.

“Load him up!” Mr. Hawkins called.

I wanted to grab Hawk and Towaco and gallop out of there at Thoroughbred speed.

Near the trailer my dad and his
friend
and fellow inventor, Madeline Edison, watched. Actually, they were watching Madeline's seven- year-old son watching the Appaloosa. Mason has a condition that makes him unplug the world sometimes and tune everybody out. But he'd bonded with Towaco when I'd given him riding lessons and a special kind of horse therapy. Madeline wanted him to see the Appy off.

Mr. Hawkins, in dress pants and a gray overcoat, was keeping his distance from horsehair. Hawk's parents were in the middle of a divorce, and her dad was moving to Florida. Hawk said he'd taken a partnership in a law office, where he'd be defending murderers and robbers. She got to miss the next week and a half of school to go with him to see his new place. Plus, her dad had entered Towaco in a Florida horse show.

“I will be back before New Year's,” Hawk promised as we reached the trailer. “Do not look so sad.”

I tried to grin back at her. True, I'd miss Hawk. It had taken us months to become good friends. But that wasn't what had my stomach knotted like a hobbled stallion. I watched the snowflakes layer white on Hawk's long, dark hair. Tiny drifts pressed against the trailer tires.

“Mr. Hawkins?” My voice, which always sounds gravelly, cracked. “Maybe you should wait until the snowstorm's over.”

He laughed. His perfect haircut didn't budge in the wind. “This is hardly a snowstorm, Winifred. At any rate, we'll drive out of it.”

“But the roads. They'll be slick. And with the trailerâ,” I started.

Dad stopped me. “They'll be all right, Winnie.” His eyes looked sad, and I knew he knew.

I was remembering a blizzard in Wyoming two years ago, the day Mom and I had gone out in it to see a horse. My mind flashed a pictureÂ of the instant after our car spun on the ice and out of control. I have a photographic memoryânot a
good
memory, but one that stores pictures in my brain and spits them out, even when I don't want to see them. And I didn't want to see this oneâmy mom's hand limp over the steering wheel, her head against the window.Â .Â . .

Nickers, my white Arabian, whinnied from the paddock. She pranced along the fence, looking gorgeous, as white as the snow falling around her. Sometimes I think she knows exactly what I'm thinking and exactly what I need.

“Nickers doesn't want you to go either, Hawk,” I said, pretending that's all there was to it. “She'll miss Towaco.”

Towaco had been my first “problem horse” when I set up business as Winnie the Horse Gentler in Ashland, Ohio. I'm only in seventh grade, but I learned from the best, my mom. She
gentled
horses instead of breaking them. And now people pay me to do the same thing.

“Towaco!” Mason let out the name like a cry from his soul. It hurt to hear it. Pulling away from his mom, he ran up to the Appy. His stocking cap flew off, and wisps of angel-blond hair blew across his forehead. Green mittens reached up for Towaco's neck.

Hawk lifted him so he could hug her horse. Mason's lighter than a sack of feed. “Towaco is coming back, Mason,” Hawk promised. “Maybe he will bring you back a blue ribbon from the Florida horse show. Wouldn't that be nice?”

Towaco nuzzled Mason's hair. Mason hardly talked at all around us until he and Towaco got so close.

“They'll be back, Mason,” I said, kneeling beside him.

But he didn't seem to hear me. He stared, unblinking, at a spot on Towaco's shoulder. He'dÂ already gone away in his mind.

Madeline walked up and put her hands on Mason's shoulders. “Come on, honey,” she coaxed, drawing him away from the Appy.

Madeline turned to Dad. “I just hate this! Maybe it was a mistake to let Mason get so attached to that horse in the first place. It's too hard on him to say good-bye.”

“They're coming back, Madeline,” Dad reasoned.

“
He
doesn't understand that, Jack!” she snapped.

I don't like to hear her say “Jack.” She's the only one who calls him that. While I was becoming Winnie the Horse Gentler, my dad was changing from the Wyoming Mr. Jack Willis, insurance boss, into Odd-Job Willis, Ashland's handyman. I'd rather hear Madeline call Dad “Odd-Job” than “Jack.” Mom called him Jack.

“Don't forget to stop and let him walk around,” I pleaded as Hawk walked back down the ramp. We shoved the tailgate shut. “And don't let your dad drive fast.”

Hawk grinned at me and pulled from her pocket a small box wrapped in fancy Christmas paper. “Don't open it until Christmas.”

“Thanks, Hawk.” I wished I'd done my shopping earlier. But at least this year, for the first time in my 12 and a half years, I had my own Christmas money. I'd managed to save from the fees I'd gotten for training horses and boarding Towaco. “You'll get yours as soon as you get back, okay?” I said as I watched Hawk get into the car with her dad.

Dad, Madeline, and I waved as the black trailer bounced away and disappeared around the corner. Only Mason stood stone still, not waving, staring as if he could still see the spots on Towaco's back.

“Want to come with us to get something to eat, Winnie?” Dad asked as Madeline herded Mason toward their van. “We're picking up LizzyÂ from Geri's house.” Lizzy is my “little” sister, a year younger than me, but two inches taller. She also got the great hair and skipped the freckles. Life is so unfair.

“Yes, come with us,” Madeline agreed, still pushing Mason toward the van.

I didn't like doing family-like stuff with Madeline. She's tall and too skinny and nowhereÂ near as pretty as Mom was, but she's okay. It's just that I don't think I'll ever get used to Dad having a friend who's a girl.

Note to self:
not
a girlfriend.

“No thanks,” I finally answered. “I've got to get to the pet store.”

I walked from our house at the edge of town through snow flurries to Pat's Pets in town. Passing by houses with Christmas lights and manger scenes, I saw baby Jesuses everywhere. I did a mental checklist of Christmas gifts I wanted to buy. It helped keep my mind off Hawk and the trailer and the snow.

Ashland doesn't have a lot of stores, andÂ I refuse to buy things from A-Mart, which is owned by the Spidells. They own half of the businesses in town, including Stable-Mart, a fancy stable where horses are held prisoners in their stalls with almost no turnout time. What I needed to do was shop around on the Internet.

Stepping into Pat's Pets felt like changing seasons. Dogs yapped in the back, birds squawked, and the whole store smelled like spring. I hung my damp jacket on the coatrack and shook snow out of my hair. “Pat?”

“Like, hi.” Catman Coolidge didn't look up from the computer. He was speed-typing, using only his thumbs and pinkies. Catman andÂ IÂ help man the Pet Help Line, answering e-mails people write in about their pets. He takes the cat questions. I handle the horse questions. And Eddy Barker answers questions about dogs.

“Hey, Catman!” I watched over his shoulder while he answered his last e-mail. I wondered if the people writing him had any idea what he looks like. Catman is a throwback to the 60sÂ or 70s when people used to dress funny and protest war. He has long, wavy, blond hair and eyes as blue as a Siamese cat's. He's probably the only eighth-grader in the world who still wears tie-dyed shirts, striped bell-bottoms, and flip-flops, even in the winter.