Read Girl at the Bottom of the Sea Online

Girl at the Bottom of the Sea 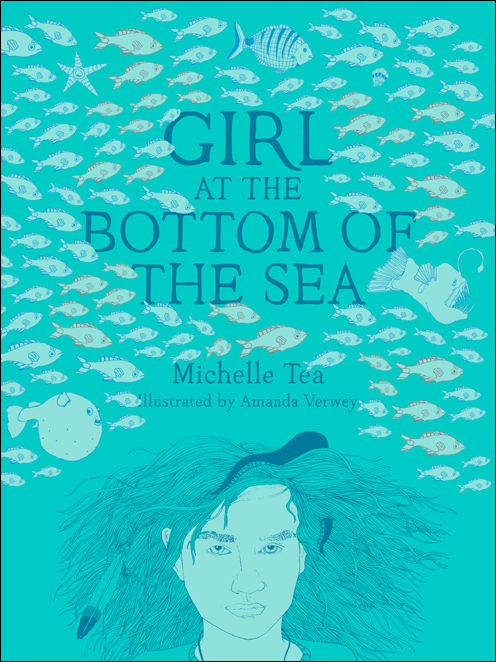 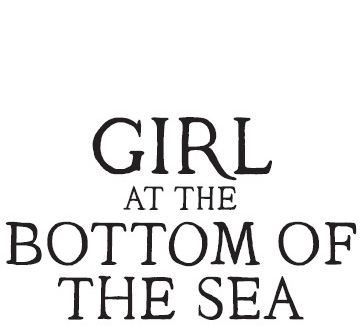 All rights reserved, including the right of reproduction in whole or in part, in any form.

McSweeney's is a privately held company with wildly fluctuating resources. 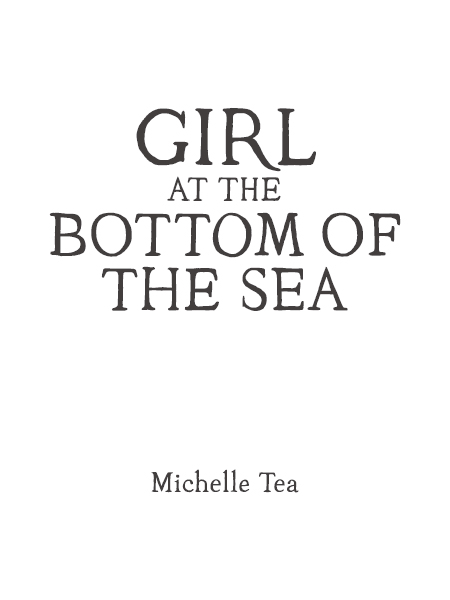 I
t's like a fist
, Sophie thought. A giant fist the color of water, which is the color of nothing, but gray-blue like the cloudy sky and black from the oil and grease of the creek. Being water the great wave shone, catching a sliver of fiery orange from the last bit of sun in the sky. It was a terrible, liquid fist edged in burning colors, a shimmering, wet fireball smelling like the salt of the sea and the dirt of it, too.

Beneath the waters of the shallow creek, her face buried in Syrena's long hair, Sophie struggled. Syrena clutched her tighter, her strength surprising, magic and animal. But Sophie was not trying to escape, she only wanted to see. If she was going to die at the ocean hand of her grandmother, Sophie wanted to do it bravely.

Twisting her face free, she tilted it upward through the water, toward its grainy surface. Above her, the shadow of the great wave darkened the creek and Sophie could hear, muffled by the water and by her terror, shouts and screams from the shore.
Angel. Dr. Chen.
They would be
running now, pushing through the torn links that fenced the creek, booking it for higher ground.
A tsunami in Chelsea Creek.
The rogue wave had reached its maximum height. All through the city, people would blink, rub their eyes, and shake their heads. Something tall and shining in the darknessâwas it a cloud? It was nothing. It was gone as soon as they saw it. But the sound of it! The flooding on the banks!

When Kishka's mighty fist came down, Sophie felt herself fall to pieces. Though the pain was too great to fully comprehend, it was as if her body had become liquid inside and her bones and muscles were being ground into the trash and silt beneath her feet. She felt the mermaid torn away from her, thrown up into the sky. And before she could cry out, Sophie was flying, too. As hard as she had been punched down into the creek bed, so did the force of the wave catapult her into the air.

By the last light of the sky and the faraway streetlamps ringing the housing projects, Sophie and the very creek took flight. A shopping cart whizzed by, a car door, a small refrigerator. Like a girl in a horrible snow globe, she was suspended in a confetti of creek mud, stuck here and there with rocks, with bits of brick and chunks of cement. From her vantage she could see across all of Chelseaâthe old-fashioned dome of City Hall, the red-and-white-checked water tower at the top of Soldier's Home, the Tobin Bridge like a length of green Legos, stretching into Boston, and even Boston itself, with its glittering buildings. And all around it, water.

Time seemed to slow as Sophie flew above the city and she looked down upon it. How small Chelsea looked, how tender it suddenly
seemed, with its twinkling streetlights, the yellowy glow coming through the windows while inside families ate dinner, oblivious. Even the groups of boys gathered in the city square, the ones who had so often yelled after Sophie and forced her to take a different route home, seemed innocent to her now for all they didn't know. They thought that Chelsea was simply a city, a banged-up urban playground that held and trapped them. They had no idea that it was so much moreâthe birthplace for an ancient magic that had suddenly and powerfully awoken, a magic that was inside Sophie, that threaded through her family, coming down from her ancient and terrible grandmother who seemed to have become the poisoned creek itself and was now sending her granddaughter so many miles above the town that it looked like a child's toy beneath her, its graffitied walls and trash-strewn curbs no longer visible.

But at Sophie's wild height, with time slowing down around her as she tumbled from the sky, with all that she had learned racing through her head, Sophie saw only home.
What a strange way to leave home for the first time
, she thought as she flew. Her heart rang out for this town that had bugged her so hard, its packs of boys that menaced her, its dirty creek and beat-up parks.
It's mine
, she thought.
Mine to protect and return to. Mine to saveâfrom my grandmother.

At that thought, the wave that had lifted Sophie so violently into the air shattered around her like glass, and in every drip and drop, every splash, were the many faces of Kishka: Kishka the dragon, Kishka the grandmother. Kishka the young beauty and Kishka the
swirling darkness, the very fabric of terror, the power that every act of evil draws its energy from. Kishka the
OdmieÅ ce
âone of the last of these magical beings that walked the earth at the beginning of time, that had shaped the earth, the people and their ways. Kishka had shaped the world in the most terrible of ways, bringing war and pain and hatred. Kishka had been living off humanity's misery since the dawn of time; she'd grown rich with it, parked in a garbage dump in Chelsea, Massachusetts, passing her days as a cranky old woman. But now Kishka's secret was out. Sophie knew what her grandmother really was, and she knew that her own magic, whatever it may be, came from her. And now Sophie, with her little chunk of inherited magic, was going to have to face off with her grandmother, who had it all, whose magic was millennia-old.

And then there was Syrena.

The mermaid was flying through the night sky alongside her, a miracle of the air now, not the sea. For a moment Sophie forgot her own selfâbroken, hurled, imperiledâand was mesmerized by the sight of the creature, her first clear view. Her tail was so long! Thick and strong, it beat against the air as if Syrena was trying to swim through the sky. Her scales in places glinted like rhinestones, and in others they were dull, torn up, trailing ragged tendrils. Her long, pale arms looked made from the moon that glowed in the sky, and they scratched and flailed at the darkness. Her hair streamed out behind her, longer even than her tail, impossible. It looked like a great mat of seaweed, its own ecosystem, stuck with seashells and tiny sea creatures and
woven through with slick green sea plants. At the mermaid's hips were strange, winglike fins; like a jellyfish they undulated. Syrena curled her body through the air, but she was not a bird, she was a sea creature. And as Sophie felt herself begin to plummet, so too did the mermaid. 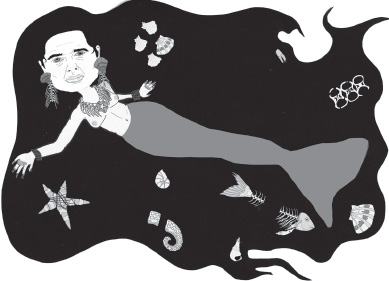 Syrena flipped herself in the air like a wild acrobat. “Like me!” she screamed to Sophie, the rush of the fall ripping the words from her mouth, but Sophie caught them. Syrena had tumbled her body into a dive and stretched her arms before her. Her head was tucked, her hair tangled around her face like a mask. Even if Sophie wasn't so broken, she doubted she'd be able to do as Syrena showed her. Clumsy Sophie, who'd kicked her gymnastics teacher in the chin during her first (and
last) class. Sophie, probably the only person on earth not to have a center of gravity. Sophie who wobbled and tripped even when her shoelaces were tied; Sophie would not have been able to flip her body into the arrow that Syrena had become, cleaving the water, sending up a great spray. No. Even if she could have moved, Sophie would have entered the water the same way: in a terrible back flop that would have turned her bones to jellyâif she still had bones. But Sophie didn't think she had bones anymore. She was a beanbag, a water balloon. She hit the water with a tremendous impact, and then she sank into the darkness.

S
ome time later, Sophie awoke under the water. The talisman she wore around her neck softly illuminated the rippling area closest to her. Even the watery fist of her grandmotherâas big, it seemed, as the ocean itselfâhad not been enough to rip the sea glass from her neck. It was strong, just like Angel, who had given it to her. Unable to move, Sophie thought of Angel hard at work in Kishka's dump, working the glass tumbler with thick, dirty gloves on her hands, hoisting barrels of sparkling color onto her shoulders, her brow sweating beneath the band of the woolly cap she wore no matter the weather. Sophie wished she could reach out to her friend's mind to let her know she was okay, but then, Sophie wasn't sure she
was
okay. But if she
was
going to be okay she knew that the talisman would help her, and she thanked Angel in her heart as she lay inside its cool, blue glow.