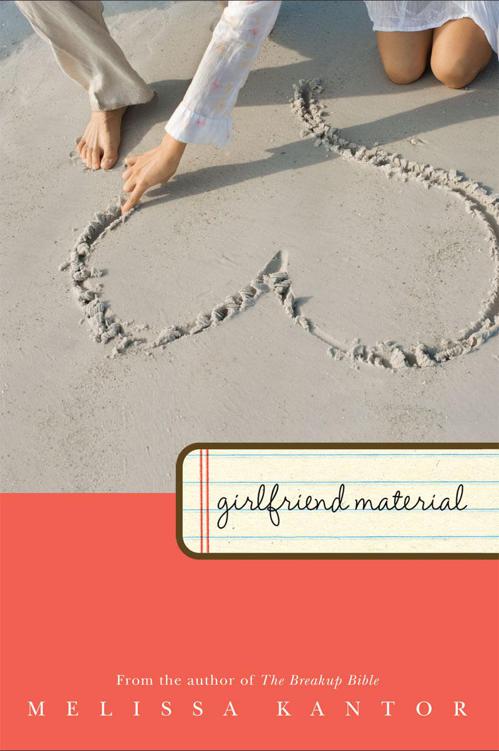 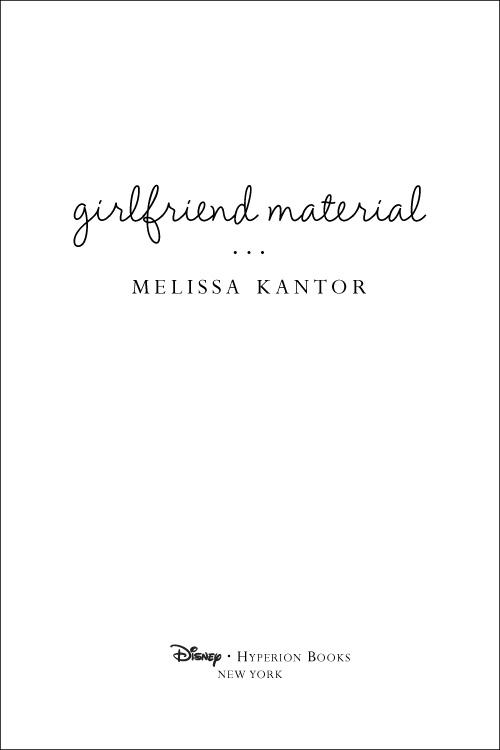 Text copyright © 2010 by Melissa Kantor All rights reserved. Published by Disney • Hyperion Books. No part of this book may be reproduced or transmitted in any form or by any means, electronic or mechanical, including photocopying, recording, or by any information storage and retrieval system, without written permission from the publisher. For information address Disney • Hyperion Books, Fifth Avenue, New York, New York 10011-5690.

Designed by Elizabeth H. Clark Printed in the United States of America

To Julie L. Gantcher and
the memory of Neal I. Gantcher

I SWEAR MY MOTHER
had been talking since Salt Lake City.

To appreciate how truly impressive a feat this is, you need to know that we were currently heading east on Route 6 toward Dryer’s Cove, Massachusetts, almost three thousand miles from Utah, where our day had begun with a predawn drive to the airport. So officially my mother had been talking since
last night
. She’d talked in the car, she’d talked while we waited to clear security, and she’d talked during the flight attendant’s demonstration of the plane’s safety features, which means we could have been the first two people in history to survive a twenty-five-thousand-foot plunge into an open body of water only to die due to an inability to inflate our life preservers.

“Oh, Katie, this is just what I’d hoped it would be. We’re
really
getting to know each other. Now, honey, smell the brine in the air? That’s the ocean.” Since my window was up, my mom took it upon herself to lower it. My hair started flying madly around my face like it was attacking me. I took a rubber band off my wrist and gathered it into a ponytail.

“Mmm,” I said. It was pretty much all I’d said since we’d left Mountain Time. My mother and I were engaged in a battle of wills in which she pretended (by throwing the occasional rhetorical question my way) not to notice I wasn’t speaking to her, and I pretended (by occasionally humming a monosyllable in her direction) I wasn’t not speaking to her. All of this because she’d yanked me out of my dream summer in Salt Lake City and dragged me across the country to be her companion in marital strife.

Every few months my parents’ marriage starts to bear an uncanny resemblance to a
Desperate Housewives
episode. I come home to find my mom weeping into the phone, or I wake up on Saturday morning to the lyrical sound of my dad screaming,
What is it that you want from me, exactly?
Up until now I’ve just made it a policy to lie low (mostly by staying at my best friend, Laura’s, house for days at a time) until the storm passes—an event that is usually marked by the appearance of several dozen red roses scattered in vases throughout the house, or the tinkling of a new bracelet on my mom’s wrist.

This time around, things with my parents started heading south in early June, about two weeks ago, and as usual I fled to Laura’s. Just to be clear, this doesn’t exactly suck. Laura’s house is practically a mansion, and she’s got a pool and a hot tub, and except for the fact that her totally annoying brother, Tom, who’s going to be a senior, and his totally annoying and
truly
idiotic friend Brad, enjoy spending their days blasting classic rock and arguing about football at the top of their lungs when Laura and I are hanging out in the pool, it’s basically heaven at her house.

When I wasn’t sitting poolside at Laura’s, I was taking a summer fiction writing class for high school juniors at the U, and there was a lot of homework for that. Plus, Laura and I were playing tons of tennis at her tennis club because we both made varsity this year— only so did about ten other girls, which meant if we weren’t kicking ass and taking names by September, we’d spend the season on the bench.

So aside from the fact that my home life resembled nothing so much as the beaches of Normandy on D-Day, I wasn’t exactly having a bad summer, what with hanging out with Laura and getting in shape and writing stories and reading cool writers like Ernest Hemingway and F. Scott Fitzgerald. Plus, if past is prologue, I was pretty sure my parents would be all lovey-dovey by July 4th, and I’d be able to go home to do more than grab clean clothes.

Which is exactly what I was doing when I walked in the door two days ago and found my mother on the phone with her travel agent, talking about fares from Salt Lake City to Boston. I asked her what was going on, and she said,
I need to have some me time with Tina and her family on Cape Cod for the summer.
Tina was my mom’s college roommate, and after college, Tina and my mom and Henry (Tina’s husband) taught history in New York City together until my mom moved out West with my dad.

At first I thought she was just sharing information with me, like,
Honey, I want you to know you can reach me in Massachusetts until Labor Day.
You can see where I got this idea, right? What with the words “me time” featuring pretty heavily in her description of her plans.

My response was fairly mature, if I do say so myself. I didn’t say, for example,
Well, Mom, maybe if you went back to teaching, since your kids are sixteen and twenty-one and therefore a
tad
old to need a stay-at-home mom, you’d be a little happier and less desperate for Dad’s attention.
Instead I told her I was really sorry about things with her and my dad. I told her I totally understood her needing to get away.

I told her I’d miss her while she was gone.

But it turned out that by “
me
time,” my mother meant “
we
time,” and that it was not
one
ticket to Boston that she had purchased but
two
. That’s when I completely lost it. I mean, my mom and I aren’t even close. If she’d wanted my older sister, Meg, to go with her to the edge of the continental United States, that would have made total sense. Meg and my mom are peas in a pod where my dad is concerned. They love to sit around and talk about how insensitive he is and how he’s so focused on his job he doesn’t take time to appreciate Mom and how hard she works (?!?!). They especially love to say this while they’re shopping online and charging it to his Visa.

When I suggested to my mom that maybe Meg could accompany her East, she said Meg was taking classes this summer (she’s going into her senior year at NYU).
Oh, taking classes,
I said.
Who else do we know who’s taking classes this summer?
My mom said it wasn’t the same thing because I’m in high school and Meg’s her favorite—oh, wait, no she didn’t
actually
say that. She made up this whole thing about how the summer could be the perfect opportunity for us to “get to know each other better.” Considering that my mom’s idea of getting to know me involves asking if I’m really going to go out of the house in whatever it is I’m wearing, and telling me I have such pretty hair it’s a shame I don’t cut it more fashionably, this didn’t exactly sound like a promise so much as a threat.

That’s when I gave up on my mom and started begging my dad to let me spend the summer with him in Salt Lake. I reminded him that Laura and I had been playing tennis together every day so that we could be first singles this fall. I was sure that would convince him even if the whole writing class thing didn’t. My dad’s really into my being a great tennis player. He’s the whole reason I started playing in the first place—when I was little, practically before I could walk, he had me out on the court hitting with him.

But it was too late: my father, like King Hamlet (which we read in English this year), had already had poison poured into his ear by my mother. He just said I shouldn’t give my mom a hard time and there’s plenty of tennis courts in Massachusetts and,
Sorry, honey, gotta go, I’m late for work.

And there you have it, folks—writing class, gone. Kick-ass tennis game, gone. Summer with my BFF, gone. And why? So my mom could have some “alone time.”

“I’m so excited for you to see Sarah again,” said my mom. “Do you remember her at all from their visit?”

My mom was referring to this time around ten years ago that Tina and Henry and their daughter, Sarah, came to Utah on a ski vacation. I didn’t really remember Tina or Henry, but I definitely remembered Sarah. She was awesome. She slept in my room and we spent the whole week playing really stupid tricks on our families. I remember once we hid about a million pieces of silverware in Meg’s bed, and another time we put whole milk in the skim milk carton because both our moms were on this intense no-fat diet. But it’s not what we
did
that’s important, since most of it seems pretty stupid now. It’s what it was like to be with Sarah. When I think back on that week, it seems as if we spent every second laughing our heads off. Sarah was hilarious. She was fun. She had these crazy frizzy curls that stuck out in every direction as if even her hair was having a good time.

Even though I would never in a million years have admitted it to my mom (and not just because it would have involved speaking to her), I was totally looking forward to spending the summer with Sarah. I hadn’t spoken to or seen her since that visit almost ten years ago, but I had a feeling that wasn’t going to matter, given how much fun we’d had the last time we were together. Now that we were too old to find sabotaging our mothers’ after-dinner beverage of choice a satisfying evening activity, I pictured us having more age-appropriate fun, like driving around in her car (which I was sure was a convertible), going to parties with her cool New York private school friends, trading clothes, and talking about our futures together.

One of the books my writing teacher, Ms. Baker, assigned to us this summer was Hemingway’s
The Sun Also Rises
. It’s about this group of disillusioned and depressed twenty-somethings in Europe after World War I. All the main characters are men except for one— Lady Brett Ashley, who is without a doubt the coolest woman in the world. Basically, every man she meets falls madly in love with her because she is so beautiful and chic, but she doesn’t care about any of them.

In Utah, I am exactly the opposite of Lady Brett Ashley. First of all, no guy has ever fallen madly in love with me. Second of all, unlike Her Ladyship, I do not have “curves like the hull of a racing yacht.” I don’t have a terrible body or anything, but I think my curves are probably more like those of a ferry or tugboat.