Read Give The Devil His Due Online

Give The Devil His Due 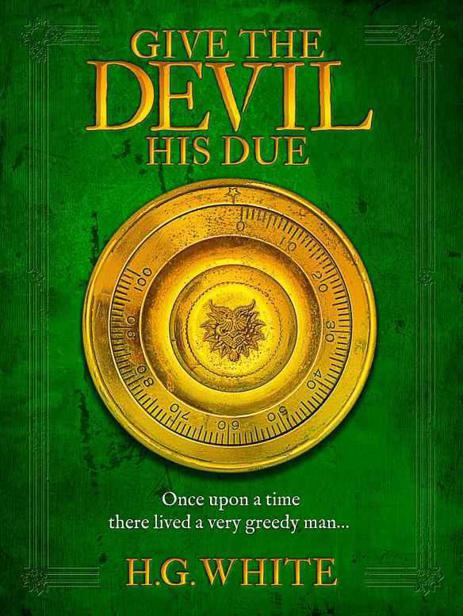 Give The Devil His Due

H G White has asserted his right under the Copyright, Designs and Patents Act, 1988 to be indentified as the author of this work.

No part of this publication may be reproduced, stored in a retrieval system, or transmitted, in any form or by any means, recording, photocopying, mechanical, electronic or otherwise, without the written prior consent of the author.

This novel is a work of fiction. All names and characters other than those clearly in the public domain are creations of the author’s imagination and any resemblance to actual persons, living or dead is entirely coincidental.

The evening’s downpour had not just brought a chill to the London air; it had managed to exacerbate the odours that Edward De Villiers now found himself wanting to avoid. His carriage weaved its way through the streets. Like so many before, the wheels sliced and agitated the newly-hydrated thoroughfare’s selection of things unsavoury: decaying carcasses, rotting vegetable matter, human and animal faeces, all exuding their reek unsparingly. With the carriage giving scant protection, the stench was overwhelming, even for one with a nose as robust as De Villiers'.

Seated next to De Villiers, James Moncourt, by comparison considerably less affluent. The two men had enjoyed a long association. Moncourt, during their more youthful days, had made amorous advances towards De Villiers, but to no avail. In spite of this rejection, they had remained lifelong friends, Moncourt always the subordinate.

‘There has been no word from Steadman?’ muttered De Villiers.

‘Then one can only deduce that the game shall go ahead as arranged.’

‘Indeed, I have never known that rook not to appear when an opportunity to make hay presents itself.’

Both men were due to meet John Steadman, renowned professional gambler; suspected by many to be a cardsharp, although as yet unproven. Steadman, already having bettered De Villiers on several occasions, and emboldened by the prospect of another conquest, would no doubt relish the chance of meeting his old adversary.

As the coach came to an abrupt halt, the sounds of an aggressive disturbance could be heard.

‘What is the reason for our stopping?’ De Villiers asked the coachman.

‘There is a gang pressing men up ahead sir.’

De Villiers adjusted the window curtain in a perfunctory manner, elevating his head slightly backward, the movement accentuating his social class. He peered through the window.

About fifty yards further on, and to the left a group of thugs had gathered, armed with cutlasses, clubs and other implements of intimidation and brutality. A body of about half a dozen men, already cuffed and tied, were lined up facing a nearby wall. One man, who unwisely had decided to show resistance, was now enduring the most savage of beatings in front of the street bystanders, mainly made up of women and children.

No able-bodied man with even the most limited powers of reasoning would stand around waiting for the same fate to befall him as that being visited upon the poor unfortunates, now shackled by the roadside. A miserable life and probable death on the high seas lay ahead of them, and all in the king’s name.

‘Take another route,’ De Villiers ordered. The coachman responded immediately. ‘I cannot afford to have my man pressed, James.’

The press gangs would show no mercy in their pursuit of suitable candidates. A gentleman’s manservant was every bit as much fair game as the lowly man on the street who had no master.

With consummate ease, the driver manoeuvred the horses and carriage, quickly heading off in a different direction, his relief at the order undoubted. De Villiers checked his pocket watch. ‘We are going to be late.’

‘He will wait. He wants this more than you do.’

‘I doubt that very much. If I had my way, poverty and despair would become perennial visitors to his being, no quarter given.’

De Villiers’ loathing of Steadman had become a fixation. During their previous meetings, Steadman had not only beaten De Villiers emphatically, but had humiliated him in front of ‘the Quality’. Enduring such embarrassment with his peers close at hand had firmly planted the seeds of revenge.

Edward De Villiers and James Moncourt arrived at Picard’s – a gaming house situated just off the Strand. De Villiers had brought with him a substantial amount of stake money – categorical evidence of the aristocrat’s determination to crush his most hated rival.

The unforeseen diversion had made them late, but that did not matter. Steadman was not present. A master of his craft and not averse to gamesmanship, he would appear when he was good and ready. In the same way that he played his cards, the gambler could manipulate opponents that entered his world even before a hand was dealt, and those who entered Steadman’s world did so at their own risk, usually with catastrophic results.

By the time Steadman eventually appeared, Edward De Villiers had become anxious. He’d been served drinks by a pretty young hostess in Picard's employ. The alcohol had begun to take effect, numbing his concentration. A changed man from the confident soul that had entered Picard's club an hour or so earlier; any psychological advantage that may have been gained was ebbing away rapidly. De Villiers’ game plan was in tatters, although perhaps he was not in a position to realise it.

After upwards of a dozen hands, with ever increasing stakes across the baize, De Villiers and Steadman now faced each other – a battlefield from which there could only be one victor.

Like his father before him, Edward De Villiers suffered from a peculiar mannerism. In times of great stress or uncertainty, he would sneeze in the most animated of actions. It was almost as if his entire body were under some sort of involuntary violent attack. To the onlooker it was most bizarre, for it would only happen the once.

As the evening wore on, De Villiers had lost everything he'd brought with him. Now, more determined than ever, his resolve fortified by the club’s hospitality, he would see things out to the last.

With the promissory note placed in front of De Villiers, Picard poured on the hot wax in readiness for him to cast an impression using his seal ring. This would leave no doubt as to the note's authenticity in the event the debt had to be honoured were he to lose. As De Villiers moved his ring finger towards the wax he sneezed. Steadman was taken aback by the ferocity of the emission.

Against Moncourt's advice, De Villiers had offered his trading company as a guarantee for his wager – a considerable enterprise by any measure. If Steadman won, the loss would ruin Edward. But on this night Edward De Villiers could not lose. He had one of those rare hands that all gamblers dream about.

De Villiers had the advantage of ‘playing open’ – he knew what his cards were. Steadman had been ‘playing blind’ and so only had to chance half the amount of De Villiers’ stake. Steadman had ‘paid to see’; De Villiers would have to show his cards. As he lay down the cards one by one, each ace facing up from the table, De Villiers savoured the moment, watching Steadman trying to maintain his stone-face expression, doing his best to conceal the dread that such a hand would give rise to. Moncourt looked on, observing the man’s discomfort, allowing himself a wry smile. It was now Steadman's turn to show his hand. He turned over the first card: the three of clubs, the second: the three of spades. De Villiers’ heart was now beginning to pound. Steadman, wishing he wouldn't have to show the last card, slowly forced himself.

As he pinched the corner with his thumb and index finger, he first looked at the card and then turned it over on to its back, revealing the face side. Moncourt had a sharp intake of breath – clearly audible due to his clenched teeth. De Villiers’ disbelief at what he was seeing was soon confirmed by his contorted features. Glaring up at him from the table was the three of diamonds. Together, the cards provided Steadman with an invincible combination.

To gamble such an extraordinary amount without having seen what he had been dealt, and then to produce the only combination that could not be beaten was outrageous. Only a madman or a fool would wager on such an outcome … or perhaps someone who knew what his cards were, even before they had been revealed.

That was it! De Villiers, convinced he had been wronged by Steadman, steeled himself. ‘There are foul methods at play here sir.’

Steadman was having none of it. ‘The game was fair, and well you know, De Villiers.’

‘I think not. You, sir, are a liar and a cheat of the first order. Picard, give me the note, I wish to retract it.’

‘I'm afraid I cannot do that Edward. The pot has been won legitimately; I bore witness.’

Moncourt interjected, coming to his friend’s aid. ‘Picard, the man's a rogue. I have never seen such brazen, underhand dealing. What are the odds of those cards falling?’

‘I know not of odds James. I do know that Mr Steadman has played in accordance with all house rules.’

After the initial shock of seeing the prial, Steadman was starting to enjoy himself. He stared at De Villiers and grinned. Incandescent with rage, and unable to accept defeat, De Villiers did not know how to respond. Suddenly he lunged at Steadman, the violent movement overturning the table in the process. Both Picard and Moncourt were now trying to restrain Edward De Villiers. The young serving wench looked on, frightened.

Picard snapped quickly, ‘Take him away James; it's not good for custom. The game is over.’

Moncourt could see it was futile to argue. With difficulty he ushered his friend to the door, then to the street outside. As De Villiers began to regain his composure, Moncourt reflected on what had transpired within. De Villiers steadfastly refused to believe anything other than skulduggery had taken place. He was even starting to wonder if Picard had had a hand in the evening's events.

De Villiers thought for a moment. ‘By God he will not benefit from such treachery. Mark my words James, by the night’s end, that document will be in my possession and our friend will see a reward for his efforts the like of which he could never imagine.’

‘And what of Picard?’

‘I shall deal with our friend Picard on the morrow.’

Moncourt looked at De Villiers. In his eyes he could see that nothing but total vengeance was going to placate his friend.

A Far Country by Daniel Mason
Murder Comes by Mail by A. H. Gabhart
Flash Point by Colby Marshall
Spiral of Bliss 03 Awaken by Nina Lane
A Very British Coup by Chris Mullin
Bond - 27 - Never send flowers by John Gardner
Fear (June Hunt Hope for the Heart) by Hunt, June
Within This Frame by Zart, Lindy
Too Naughty by Brenda Hampton
An Inconvenient Mate by Leigh, Lora
Our partner