Read Gladyss of the Hunt Online 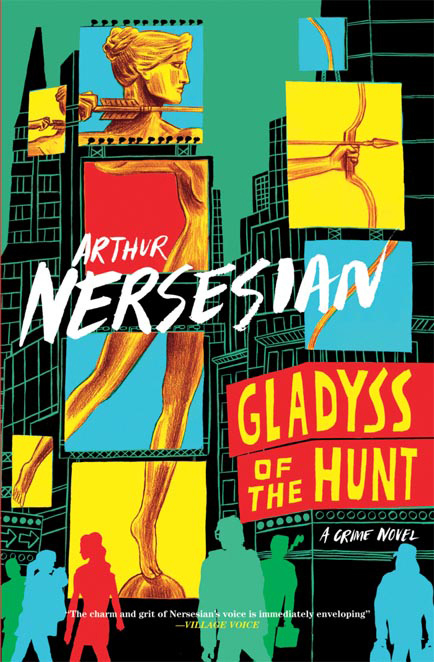 The Swing Voter of Staten Island

The Sacrificial Circumcision of the Bronx

All rights reserved. No part of this book may be reproduced, stored in or introduced into a retrieval system, or transmitted in any form or by any means (digital, electronic, mechanical, photocopying, recording, or otherwise), without the prior written permission of the publisher, except by a reviewer, who may quote brief passages in a review.

Bernie Farrell wasn't one of the nineteen who died the night Sandy hit Staten Island. In fact he survived nearly a month after that lethal storm surge. He'd been in bad shape when he retired, because of injuries he'd suffered on the job, and since he was too damn bull-headed to get proper treatment, let alone physical therapy, I'm sure his health had declined further over the years. Reports indicated that for three excruciating weeks after the storm he had camped out in his ramshackle home in New Dorp Beach without electricity, a charged cell phone, or any kind of heat, foraging for whatever food he could find. Apparently he became isolated toward the end. I still don't know why he ever moved out of his spacious, rent-controlled Manhattan apartmentâor how he wound up down there, in the middle of nowhere. No one I knew kept in touch, let alone visited him. Still, you couldn't feel sorry for him. I'm sure he wanted it that way. Even his immediate neighbors seem to have avoided him. His body was finally discovered when a FEMA housing inspector, after repeated attempts to check for damage, peeked below his window shade, past the can filled with empty liquor bottles, and saw his legs splayed out on the filthy kitchen floor.

I wish I could've cried for him. I should've felt bad, but after the Blonde Hooker case we went our separate ways, and I was in an awful place. A self-help book I read on depression at the time said it was important to avoid triggers, so I put a big red traffic cone in front of him and everyone else who'd been involved in the whole affair.

Shortly after hearing of Bernie's deathâduring the family New Year's Eve party, before I could welcome in 2013âI had a major falling out with my bipolar brother. It wasn't so much the fight that bothered me, it was realizing how bad things had gotten. That
night I did something I never doâI went home and got seriously drunk. And that was when I found myself carefully piecing together the whole fucked-up mess that had begun almost a decade earlier. Ultimately it really was all Eddie O'Ryan's fault.

We were both rookies, and after graduating from the police academy O'Ryan and I had been dumped into the Neighborhood Stabilization Unit attached to the One-Four in Midtown South. It wasn't a bad area, but crowd control on Times Square during New Year's Eve of 2003 was stressful enoughâeveryone was still waiting for that next big terrorist attack.

Afterwards, in his studio apartment, we had our own little countdown and popped the cork on a small bottle of champagne. Though Eddie was a little bland, he had rugged good looks and at work he always had my back. The single detail I found most appealing about him was the fact that he was taller than meâat six foot two, I found it difficult to find men I could look up to. He wasn't a bad kisser and the mood was perfect.

Slowly clothes came off: my shirt, bra, pants, panties. His fingers migrated subtly southward. I had made up my mind to finally get it over with. Quickly we moved from his tiny sofa to his king-size bed, a shiny brass affair that looked like some kind of sexy chariot. As his giant spear rose over me, I started backing away nervously.

“This is actually my first time,” I confessed.

“First time at what?”

“Gladyss, are you kidding me!”

“Wow! Not many virgins around nowadays,” he murmured.

“Why don't I . . .” He slithered down and proceeded to lick me where I was already wet enough. I told him that now I was ready for the kill, and reached down to find that he had gone soft.

Suddenly my cellphone chimed. My brother Carl calling from California. Back then, he was the only person I'd always pick up for.

“Why don't we take a break?” I suggested, since O'Ryan obviously needed a moment. I hadn't spoken to Carl in a while and figured he just wanted to quickly wish me a Happy New Year. As Eddie headed into the bathroom, my brother launched into his rant of the day about “Bush's rape of Iraq.” Soon I heard the toilet flush, and the
door opened.

“You're going to feel foolish when they
do
find Saddam's cache,” I told Carl.

Since my wallet was on the side table I held it up, showing him the plastic window with a photo of my brother and I hugging.

O'Ryan took the wallet out of my hand and gasped at it in amazement. He had never seen or met my twin, though I had told him about Carl's anti-war sentiments.

I didn't respond. It was best just to let Carl exhaust himself, then I could say goodbye and O'Ryan and I could get back to the business at hand. But my would-be lover shouted out: “If Saddam really had nothing to hide, he'd just give the weapons inspectors full access!”

“Let me speak to that guy,” said Carl.

Within seconds, O'Ryan had my cell pressed to his face and the two were going back and forth about Iraq's nuclear capabilities. “Saddam was within six months of weapons-grade production back in '91!” O'Ryan yelled.

I vowed never to answer my brother's calls again. I should've expected this. As twins, the closest thing Carl and I had to a psychic bond was his uncanny ability to call me at the worst possible moments. And yet I'd always answerâperhaps because he always seemed distressed.