Gods of the Dead (Rising Book 1) 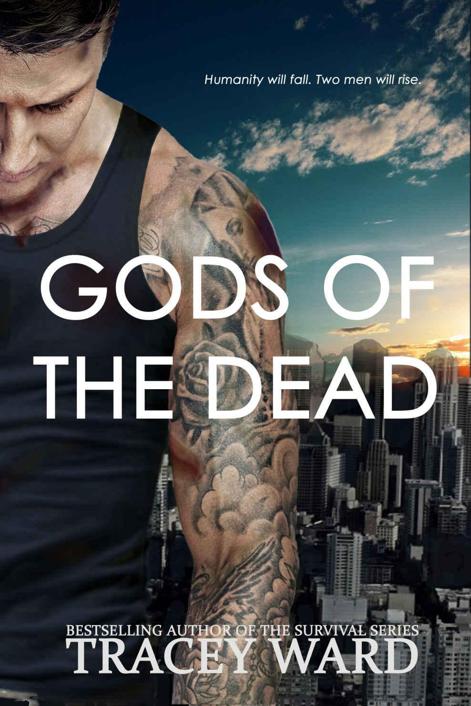 Gods of the Dead

Gods of the Dead

All Rights Reserved. No part of this book may be reproduced in any form without permission in writing from the author, except as used in book review.

This is a work of fiction. Characters, names, places, events, or incidents are products of the author’s imagination. Any resemblance to actual people, living or dead, or to places or incidents is purely coincidental.

One Year After Outbreak

I rap my knuckles against the door sharply, aiming for the face of the Santa sticker with the drunken grin that’s stuck to the surface. He’s wrinkled on one side, the adhesive gripping onto itself instead of the door and it sends a ripple down the side of his face that makes him look like he’s winking at me.

There’s rustling from inside. Rushed footsteps, a muffled holler. Finally feet block the light under the door.

“Nothing, never mind. Open the door,” I demand, my voice kept low.

“Not until you tell me—“

The knob turns slowly and the door cracks open. A flimsy brass chain dangles loosely above the bloodshot eye that peeks out at me suspiciously. It’s a woman. Sallow skinned and paranoid.

I nod my head curtly.

“Then you better hope I’m not.”

She hesitates, her eye clouding with doubt. “What does that mean?”

“It means open the door or I’m walking.”

The door slams shut. The chain securing it jingles frantically.

Tweakers. Lazy and useless until you threaten to take their toys away.

She opens the door and I get a good look at her in the florescent yellow light of the hall. Her face is hollow. Sunken eyes, sharp cheek bones, and a tight sack of skin on bone under the skimpy shorts and tank top she’s wearing. She doesn’t have a bra but she’s got nothing there worth seeing. Every ounce of excess fat has been used up and thrown out a long time ago. I’d say she can’t be much older than me in years, but her body is so spent she’s a walking corpse.

“You got the stuff?” she asks eagerly, her eyes roaming my body.

“Angelo!” she shouts over her shoulder. “It’s here!”

I wish this chick would stop with the shouting. I want to make it in and out of these slums without being seen. This isn’t my regular route, it’s Bennett’s, and I’ll beat the shit out of him on sight for making me come here to deal with these people, but I’ll have to find him first. Dude went MIA this afternoon. No one’s heard from him in hours and in this business if you’re not answering your phone you’d better be dead. If you’re not, you will be for missing the call.

“You wanna come in?” the girl asks.

I keep my face blank, hiding my disgust. “No.”

“You’re hot,” she says bluntly, her eyes scouring my black hair and olive skin. “None of the other delivery guys have been hot. They’re all old white guys who look like my uncle. What are you? Mexican? Italian?”

She frowns in confusion. “You’re not really Scottish, are you?”

A guy shows up behind her, materializing from the shadows of the apartment.

“Your guess is as good as mine,” I mutter, watching the guy closely.

He’s wearing ripped jeans, missing a shirt. His brown hair is greasy and long, falling limp around his face, but he’s better off than the chick is. His face is fuller and his body is bulked with a little muscle, but it doesn’t look like he’s armed. Just in case, I keep my eyes on his hands.

“Hey, what’s up, man?” he greets me casually. His voice is thick, raspy, and I’m not surprised when he suddenly turns his head to cough hard and wet into the trash strewn living room.

He ignores her, straightening and wiping his mouth with the back of his arm. “Can’t shake this fuckin’ cold.”

“That’s rough,” I reply unsympathetically. “Do you have the payment?”

“This isn’t a social call.”

“No, I guess not. Yeah, yeah, I got your money.” He pulls a wad of cash out of his pocket and holds it up for me to see.

I eye it with revulsion, not sure I want to take it. I have to, I know that, but I wish I was wearing gloves. With the Fever tearing shit up and down in Oregon I’m not eager to catch anything, and this dude has something nasty. No doubt about it.

“No.” From the inside pocket of my black moto jacket I fish out a wrapped package no bigger than a small paperback. I toss it to him.

He catches it easily with one hand but the girl grabs it before he can blink and starts searching for an opening to tear into.

“Stop,” I tell her, my voice deadly serious.

She blinks up at me in surprise. “Why?”

“You can’t open that in front of me.”

“The other guys didn’t care.”

“I don’t care what your uncles did, this is how I work. You don’t open it in front of me.”

“How do we know it’s what we ordered?” the guys demands. His fingers tighten and pull the cash deeper into his palm.

“If it’s not, that’s not my problem. I’m the delivery boy. That’s it. You have a problem with your shipment, you can take that up with customer service. Not me.”

“Did you steal it?” the chick shrieks. “You swapped it didn’t you? You took our—“

“Shut your mouth,” I growl at her, pointing my finger in her faded face. “Don’t tell me what you ordered, I don’t want to know. You got your package, give me the cash, and this transaction is over.”

“No,” the guy says decisively. He crumples the money is his fist and shakes his head hard. “No way. Open it, Mandy. Check it.”

I sigh, my shoulders rising and rolling. “This is a mistake.”

“No, you made a mistake thinking you could cheat us.”

“Don’t show me what’s in that package.”

“Too late!” Mandy cries wildly. Her fingers have found an edge but the tips are blunt, her nails gnawed down to the nothing. She can’t get under the tape holding it closed. She curses and looks up at Angelo desperately. “Do you have a knife?”

He pulls a switchblade from his back pocket and snaps it open.

It never comes near me. It’s not a threat, no one is trying to use it on me, but I’m not about to give them time to try. I’m also not about to find out what’s in that package, even though I already know. It’s drugs, it’s no secret, but it’s the deniability of not seeing and really
knowing
that keeps me clean if the cops come calling. I delivered a package, I received payment – that’s it. That’s all I know. I can’t testify to more than that, I can’t go to jail for that, and so I’m less likely to get gunned down in the streets or stabbed in a prison shower to keep me quiet. This one rule, it’s how I stay alive and I’m not about to break it for these users.

I reach out and grab onto Angelo’s arm just below the wrist. He cries out in surprise, then in pain as I twist his arm and bring him roughly to his knees. The blade clatters to the ground, Mandy starts screaming, and if this guy isn’t extremely careful I’ll dislocate his shoulder from the socket.

“Not a fan of all this noise,” I lament quietly.

“Shut up, Mandy!” Angelo bites out, his teeth clenched against the pain radiating from his back and arm.

Fun fact about druggies – they’re sensitive to pain. They live the majority of their existence behind a haze that separates them from the basic realities of the world. Time is slowed, pain is deadened, and when you bring the real world to their door they have a hard time handling it. It’s too bright, too fast, and way too painful to manage.

“Listen to your boy, Mandy,” I tell her calmly. “Shut the hell up or I’ll pull his arm off.”

“No?” I twist slightly, making Angelo bark loudly in pain. “Are you sure? Should we find out?”

She whimpers slightly, bringing the package up to her mouth and pressing it hard against her lips. Her eyes are wide and bulging as she watches me control her boyfriend with one hand.

No one answers. Even though I understand why, it still annoys me.

“Hopefully I’ll never have to come back here again,” I explain to them, easing my tone but not my grip. “You’ll get your regular guy, you’ll share your beer, and you can do whatever you want with your deliveries. But if I do come back here, are we going to have a problem or are you going to remember the rule?”

He grunts in agreement.

I release his arm and let him drop. He coughs roughly as his cheek connects with the floor, spit flying from his lips onto the old newspapers scattered around him. Grainy photos of a burning building ripple with his breath as it bursts across the floor and under the pages, making it look alive. Like it’s on fire all over again.

I bend down, pull the crumpled money from his hand, and take his switchblade from the floor, recessing the blade into the handle. I leave without another word. It’s late, I’m tired, and I want out of this ghetto as fast as my feet will carry me.

When I push out of the doors to the rundown apartment building, I breathe in deeply. The fresh night air fills my lungs and pushes out the damp musk that I’ve been sucking for the last ten minutes. If I don’t get sick from the money Angelo handled, I’ll probably get something just from being inside this place. It’s the kind of slum I grew up in. The kind of place that’s never been up to code, that houses anger and poverty and locks it in its walls to keep forever, saving it for future generations and handing it down like prized possessions no one seems to be able to part with.

A Seattle city bus wizzes by and I seriously consider jogging to the next stop to take it. Dawn isn’t far off and I’m a long way from home. But I need to report to Marlow at the bar with this filthy money first and I’m not willing to risk riding inside a city bus. Most people aren’t these days. Not since the Fever took down Portland. Not since we all watched it burn.

Heading west toward home I zip the front of my jacket up high against the cold wind coming off the Sound. The streets are nearly deserted - just me and a few early risers stumbling numbly toward the start of their day - but I’m still on edge. Still watching every shadow and waiting for it to move.

The cold wind slaps me hard in the face, chilling my breath in my lungs, and I can smell the rain riding on it. The scent of dry asphalt getting wet. I’m nearly to the bar when I feel the first fat rain drop on the top of my head and it’s quickly followed by another, then five, then hundreds, and instantly I’m surrounded by them as the streets turn slick and shining under my feet. As the world is bathed in water and new morning light.