Nathan’s face was blood-splattered, fangs bared, and he raised his saber even as his chest kept taking hits.

It looked like he was about to split Jackson’s head, but Jackson lifted the AR-15 at the last second.

Nathan’s saber came down on it with all his inhuman strength. With a spark, the modern aluminum gave way to 150-year-old steel.

The rifle was now two pieces in Jackson’s hands, and the saber kept going, albeit with less force than when it had connected with the gun. Rather than Jackson’s head, it cut into his right shoulder, the blade diving two inches into his flesh.

Jackson didn’t scream. The crazed smile was still on his face, pain twisting it only a little. He let go of the rifle pieces and, with his right hand, reached for Nathan’s saber. But instead of trying to pull it out, his hand cupped around the back of the blade, trapping it.

Surprise filled Nathan’s face when he couldn’t pull his sword away.

Jackson’s left hand reached to his belt, pulled out the tomahawk. Its handle extended as he swung it. Jackson hacked at Nathan’s eyes, catching his right one. Nathan wheeled, and Jackson pressed his advantage, slashing again, this time catching Nathan in the throat. Not enough to decapitate him, but deep enough that, in all the gushing, black blood, I saw spinal bone glinting in the wound. Nathan’s aristocrat voice was suddenly reduced to a gurgle. He fell, letting go of the saber.

As he did, I noticed that I could think more clearly. Nathan’s injury was weakening his hold on me.

Jackson’s blood had settled into a slowing stream, running from his shoulder to his fingertips. Whatever had been done to him made his blood more like ours, though, so I didn’t find myself in a frenzy smelling it.

All but the Victorian’s third floor was in flames now. In the distance, I heard sirens rising.

Jackson brought the tomahawk around like a batter swinging at a pitch, but before he could take off Nathan’s head, a third-floor window exploded.

Two more bayonet-fixed rifles flew toward Jackson. He would have again dodged them both, but Nathan grabbed him and held him in place as one lanced into Jackson’s stomach. Jackson dropped the tomahawk as he fell to the ground.

Gina and Cynthia came through the third-floor window they’d just thrown the rifles from. They scurried down to a lower roof, from which they could jump to the ground without shattering an ankle.

Jackson’s breathing was sharp as he lay on his side. The bayonet had run through him. To get it out of his gut, he jerked the heavy rifle away from him with a terrific effort.

Gina and Cynthia were rushing to Nathan’s side, but he gestured at them to attack Jackson instead.

I watched as my sisters moved toward him, hissing. No smile on Jackson’s face now, but his eyes were something like battleship steel.

I finally was strong enough to pull myself off the ground, and watched as Jackson fired at Gina and Cynthia.

Even with the agony radiating from my gut, I admired him. So smart a warrior, not wasting bullets on head or heart shots, but blasting away their kneecaps, dropping them into the snow. But in the end, a 1911 wasn’t an assault rifle, didn’t have thirty rounds in the magazine. His gun went dry after eight shots. Even with their kneecaps destroyed, Gina and Cynthia still had their arms and hands. They were strong, able to pull themselves quickly across the snow. Though he was badly wounded, Jackson punched their pretty faces, bursting their lips and knocking out one of Gina’s fangs.

Eventually, their sheer strength and ability to take punishment won. They anchored his arms, pinning him to the ground.

The wonder wasn’t that Jackson lost. It was that he’d lasted this long against a combined two centuries of undead strength.

Nathan was still on his knees, hands clutching his throat. The wound had knitted itself enough for his voice to rattle: “Finish him, Ginny. I want to watch you kill your friend with my blade.” Blood squirted from his neck with each syllable.

His voice had returned, but his power over me was still weakened. My mind was my own. But that was the only thing that was mine—I limped across the battlefield and picked up the saber as he ordered.

My will still couldn’t trump Nathan’s. But my predator mind could.

I began talking to it, as I woodenly walked over to Jackson.

“Nathan is going to kill me after this,”
I thought.

Rising through its constant chant, my predator self replied:
“
This human will help his kind kill us all. Self-preservation comes in many forms, and while you may die, our races will live.”

“Look at what Jackson did
,” I pleaded with it.
“What other man could have fought Nathan and my sisters like that?”

“Which precisely proves how dangerous this human is to us.”

Like a windup toy, I kept walking toward where my sisters had Jackson pinned. Running out of time, the war inside me continued:
“You saw that smile on his face, though. He enjoys this.”

“He is nothing like us. He is a fraud made to mimic us.”

“Yes, altered by his own people. And won’t he hate them for it? Doesn’t he already? You heard what he said in the steam tunnels. How cut off he is.”

“What difference is this to us?”

I was maybe five feet from Jackson now. He stared coldly at me.

“He’s primed to break with them. All he needs is someone to gently guide him.”

“What benefit to us?”

Behind me, Nathan was seething. “Cleave his head.”

My predator mind didn’t reply immediately, instead falling back to its background chatter. But it was louder, quicker, an argument among storm clouds or ancient gods.

My arms raised the saber above my head. I was too late. I was going to kill Jackson, and then Nathan would kill me.

I wanted to tell Jackson how sorry I was. I wanted him to know that I hadn’t meant to betray him, that it hadn’t been my choice, that I’d tried to stop myself.

Just then, my predator mind rendered its verdict: “
HE COULD BE A KING
!”

My arms swept the blade down, but instead of Jackson’s head, the blade cut into Gina’s arm, almost severing it.

Her scream filled the night air, and Jackson easily pulled his arm out from under her.

Unsure if I was truly free of Nathan’s hold, I tossed Jackson the saber. “Take it,” I said.

He grabbed it with his free hand, swung the blade into Cynthia’s ribs, then across into Gina’s mouth as she tried to bite him.

They rolled off him, but instead of finishing them, Jackson got to his feet and lunged for Nathan.

The blade sung through his neck as Nathan pulled himself up to meet the attack. His head rolled through the snow.

I had never heard a wail like as the one that came from Cynthia and Gina when Nathan died—as loud as peeling thunder, mournful as a dog crying for its absent master. I was surprised and sickened when I realized it was coming from me as well.

Cynthia, her remaining fang bared, held the side of her bleeding torso and screamed, “He’s in Hell now! You killed him and sent him to Hell!”

Jackson approached Cynthia, one hand gripping his wounded stomach, the other with the saber extended. The wound made him hunch over, and somehow he seemed all the more menacing for what he was prepared to endure in order to keep hurting others. “He’ll need company,” Jackson said.

He didn’t have the chance to make good on the threat. The fire engines were close now, their flashing
lights visible against the dead trees despite the flame-engulfed house.

Cynthia’s knees were healing quickly. She picked up Gina over her shoulder, and made for the trees as fast as she could.

I looked at Jackson, not entirely sure he wasn’t going to kill me.

He extended his hand to me. “They’ll be here any second—let’s go.”

Sucking on blood packets like they were juice boxes had sped up the process. “You too,” I said, huddling on the dusty floor in his black coat.

Jackson had taken off his bloody T-shirt to examine his stomach and shoulder. His bayonet and saber wounds were now fresh, white skin. “Suppose I should thank you for that.”

“My pleasure.” And it had been. As with most of Jackson’s modifications, the process that had changed him had been good but not great. He had some enhanced healing, but I’d helped, literally licking his wounds. The same effect that heals a victim’s neck can go deeper, if you work it long enough.

We were beneath Ramsgate’s upper quad, in its steam tunnels. We’d eventually made it to Jackson’s jeep through the woods, and from there to campus. He had medical supplies in the backseat, including blood. It had been meant for an emergency self-transfusion for him, but I’d made good use of it.

“You know, this might have gone easier for you if you’d just brought some crosses,” I said.

“Can’t. Orders. Have to maintain my cover. Turned out to be the right call, since your sisters or girlfriends or whatever you want to call them lived to tell the tale.”

“You even obey orders that will get you killed?” I asked.

“Men throughout history have.” He looked at his watch. “Almost nighttime.”

“Once the sun’s down, I’ll break into the campus store,” I said. “Probably not a good idea to wander around campus naked. Then we can talk about what to do next.”

That surprised me. “Why not?”

“Your sire’s dead, so you’re free. Not much incentive for you to stick around. Mission’s going to be hard enough without wondering when you’re going to turn on me, so I’d rather just get it over with. Besides, I owe you for cutting me free there at the end.”

“And if I walk away now, what happens next time we meet?”

“One of us kills the other,” he said. “It’d probably be sooner rather than later since, again, I have to keep my cover.”

“Even without the threat, I’d rather stay with you, though.”

“You things are all about self-interest. What am I not seeing here? What’s in it for you now?”

In the jeep, I had explained to him that I’d been able to argue with my predator mind, to reason with it to allow me to disobey Nathan. But I hadn’t told Jackson what my winning argument had been.

“We’re also into deviancy. Betraying my own kind to help a rogue warrior whose own people dropped him into all this evil? Sounds hot.”

That was a lie, of course. Deviancy is cheap, easy to find. I was in this for something more.

My predator mind had said that Jackson could be King of the Nightfallen one day. Handsome, strong, and violent—how could I not want to be his queen?

FIND OUT WHAT HAPPENS NEXT IN NIGHTFALLEN #2 . . . FOR FREE 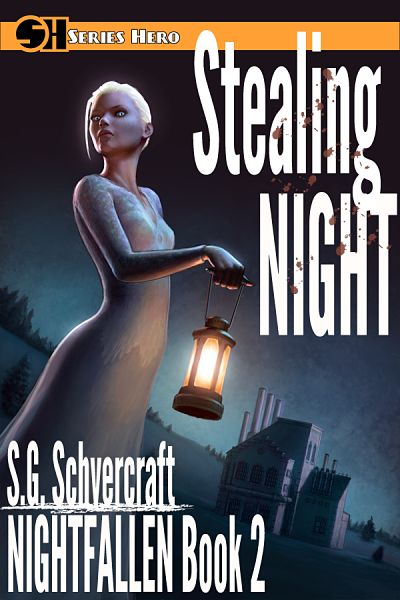 Sign up for our newsletter and get a free copy of the
Nightfallen
series' next installment,
Stealing Night
.