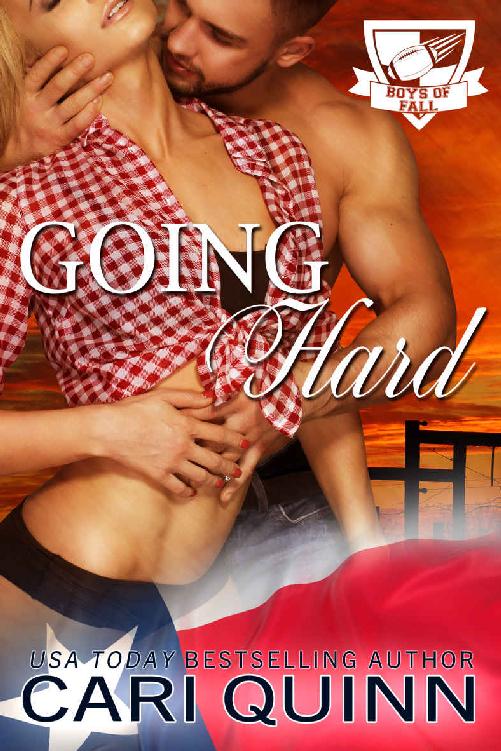 e
Books are not transferable
.

This book is a work of fiction. The names, characters, places, and incidents are products of the writer’s imagination or have been used fictitiously and are not to be construed as real. Any resemblance to persons, living or dead, actual events, locales or organizations is entirely coincidental.

All Rights Are Reserved.

No part of this book may be used or reproduced in any manner whatsoever without written permission, except in the case of brief quotations embodied in critical articles and reviews.

S
ign up
for the
MY
NEWSLETTER
for special updates.

T
his may not be hell
, but it’s doing a damn fine imitation.

She’d been dealing with the fact she was as adorable as a tiny pet chinchilla her entire life. No need to demonstrate she was also tiny in an important area up top.

As soon as she’d escaped outside, she headed around back, her aim the creek that ran through the property.

She made it as far as turning the corner of the building.

She stopped and downed the rest of her drink. Funny, that “whole liquid” courage thing? Turned out to be total bullshit. She still didn’t feel capable of facing Rafe Martinez, and she was halfway to loaded.

Okay, probably a third of the way to loaded. It didn’t take much since she rarely drank. The last time had been the Sheffields’ party—when she’d been very surprised to make the acquaintance of Rafe’s large, well-proportioned penis.

No wonder she’d been off the sauce ever since.

“Do you see my feet kicking up dust? No. This is called a brisk pace.” She gripped her cup and turned, unsurprised to see he’d almost caught up to her. Damn long legs.

“I’ve been wanting to speak to you.”

“Fabulous. I’ll just turn off my phone so we won’t be interrupted, because I’m sure it’s extremely important.” She made a show of fishing her phone out of the serviceable bra hidden by her V-neck T-shirt and turned it off. “Now, as you were saying?”

“Cut the crap, Hol. I know you’re trying to avoid me. You probably didn’t shut it off at all. Let me guess, you have some friend on one-button standby. Save me from the geek who’s got me cornered outside the barn.”

“No, but now you’re making me wish I had. That’s rather ingenious.”

Rafe shook his head, and she glimpsed the tenseness of his jaw in the light on the eaves of the barn. “We used to be friends. You used to like spending time with me.”

“Hmm.” She tapped her chin and pretended to think. “Do you have dates of this supposed liking? Because all I remember is—”

He kissed her. Hard. Big hands on her shoulders, dragging her in. Soft, soft lips, dragging her down. And his tongue, flicking encouragingly against her own.

Lord. He had no problem using his kisses to make his point, which was probably that she’d have to wring out her panties by the end of the night. At least if they stuck to just kissing—what appeared to be his only talent.

She should’ve seen it coming. He wasn’t a man to stand around talking—or snarking—about the past. Not when he could slay her with a convincing argument of his own.

Like, oh, say the steel pike in his jeans pressing insistently against her belly. So close to the shirt where she proclaimed library books were better than vibrators.

The truth? The results depended entirely on who wielded the implement. And Rafe Martinez? He had all the goods, all right. His grocery cart was fully stacked and then some. But as far as implementation…

Lame. So lame. She could’ve had wilder sex with one of the Culbert twins. In fact, she had, and they both were so used to living in the library that their skin was the same complexion as the surface of the moon.

At least they didn’t glow, she was almost sure.

“Wait. Stop.” Her hands came up to shove back Rafe, and he obliged immediately. Always a gentleman, that one. That was part of the problem.

He’d treated her like she was a fumbling virgin in bed, probably prone to the vapors at the sight of the male member. Worst of all, she was practically a fumbling virgin, on account that her only lovers were Roy Culbert, an unfortunate hookup with Connor Jones in college, and…Rafe.

She flushed and cast a glance around to make sure no one had spotted their brief lip-lock. Nope, no one nearby. Everyone was still mostly dancing and laughing inside. Thank God.

Also, maybe she needed to cut back on the streaming for a while. It wasn’t doing a thing to help her with her clearly unrealistic expectations.

“Exactly what I thought,” Rafe said, still panting. “You aren’t talking to me like you used to because you know it was too good between us. That’s why you’re running scared.”

She tried not to laugh. She honestly did. It wasn’t nice, for one thing, and for another they definitely had some kind of mouth-generated chemistry. Unfortunately, the spark fizzled out below the neck.

Not his fault, probably. Probably also not hers. Good sex was like shaking things up and waiting to see what fizzed, right? And the two of them were incompatible in so many ways that it wasn’t surprising at all their molecules or whatnot didn’t play well together once the lights were out.

“You know it. Stop denying the truth, Hol. We were incendiary.”

A laugh finally tumbled out of her, leaving her no choice but to bend over to catch her breath. She gripped her knees, using the moment to take another quick look around. The last thing either of them needed was to be overheard. Rafe was her brother-in-law, for God’s sake. If word got back to her older brother Wade or Rafe’s sister Charlene that they’d played hide the hot dog, they’d never hear the end of it.

Because nothing was ever just sex with those two, especially now that they were post-honeymoon. Every single event was obviously just one more speedbump on the path to twue love.

Bollocks to that. She wanted twue fucking, an entirely different channel on the remote control.

“Did you just say bollocks? Are you feigning being British like Madonna now?”

That killed her laughter in an instant. She drew herself back up. “Excuse me, one can use a phrase that isn’t traditionally American without feigning a damn thing. And you know what else I must’ve feigned? That I had a good time that night.”

The shock that telegraphed across his face nearly made her laugh once more. “Come again?”

“No, I did not come again. In fact, I didn’t even come the first time. Not that that’s the only barometer to good sex, but I’m just saying. The next time you wave your male ego around, make sure you know of whence you speak.” She narrowed her eyes and inched up on her tiptoes to get as close to his ear as possible. Stupid insanely tall man. “By the way, most men enjoy having their balls fondled. You should look into that before the next time you tell someone else that’s a no-fly zone.”

She strode back toward the lights and music of the party, frowning down at her crumpled cup. He must’ve hauled her against him with enough force to cause mangling. That probably explained the tingle in her lips too.

Energy expended, that was all. Her body was simply reacting to his skill at the kissing arts. She definitely didn’t want more of what that particular architect-slash-self-appointed protector-slash-soothing sex provider was offering.

She wasn’t attracted to the guy or anything. She also hadn’t nearly lost her mind at the prospect of having sex with him, even if she’d suspected he’d done it as just another form of overprotectiveness.

Sex as an electrical fence to keep her away from other, potentially dangerous guys. Hey, it was a thing on TV. And in romance novels, another one of her not-so-secret guilty pleasures.

Actually no, screw the guilt. She was not feeling guilt about anything anymore. Wild, wanton women didn’t fret about hurt feelings.

Besides, it wasn’t like she’d had a minor crush on him through all of her high school years. Her diary was the only one who knew that, and since that lilac bit of horrendousness was now no more than ashes in the fire pit on her family’s property, she didn’t have to worry about being found out.

Her goal was to have amazing, no-strings sex and to live freely while she was still young. Ish. She didn’t want to get married and settle down right away. Not until she’d sewn her wild oats and had some real adventures, both with and without her clothes.

So as much as she didn’t want to hurt his feelings, she couldn’t keep tiptoeing around Rafe. Spelling things out for him was the only way to get him to see she didn’t need him to watch out for her. And boy, did he watch. He’d stared at her all night, probably to make sure she didn’t get in over her head with some guy who would finally show her all she’d been missing.

Thank you, but no.

The time had come for her to let loose. And Rafe Martinez wasn’t going to have any part of it. Especially not the part currently covered by a lacy thong.

Her brothers were both settling down—Colt was definitely down for the count with Paige and Drake, no question there—so she was going to make like a black sheep and do the exact opposite.

Saddle up, world. Watch out for Hollie Bennett.