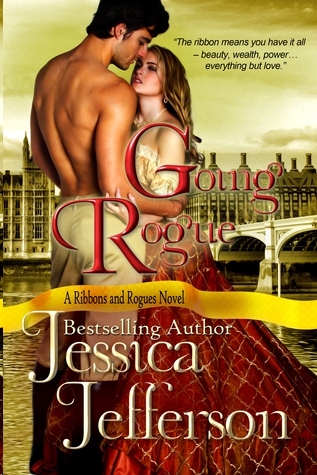 A Ribbons and Rogues Novel

This book is a work of fiction.  The names, characters, places, and incidents are the products of the author’s imagination or are used fictitiously.  Any resemblance to actual events, business establishments, locales, or persons, living or dead, is entirely coincidental.

All rights reserved.  No part of this publication may be reproduced, stored in a retrieval system, or transmitted in any form or by any means (electronic, mechanical, photocopying, recording, or otherwise) without the prior written permission of both the copyright owner and the publisher.  The only exception is brief quotations in printed reviews.

The scanning, uploading, and distribution of this book via the Internet or via any other means without the permission of the publisher is illegal and punishable by law.  Please purchase only authorized electronic editions, and do not participate in or encourage electronic piracy of copyrighted materials.

for helping me find inspiration

in the most unexpected places

and to Violetta Rand

for assisting me in effectively channeling

A special thanks to the team at Soul Mate Publishing. Debbie Gilbert, Cheryl Yeko, and my editor Cynthia Brannam.  They’re a great group to work with.  Also a big thank you to Gina Conkle for her sage words of wisdom and Victoria Vane for her much needed words of encouragement.

Lady Cynthia Browning lifted the candle higher, the flame barely piercing the darkness. As she cautiously made her way down the stone steps descending into the cellar, the eerie sound of chanting female voices echoed around her. She covered her nose with a handkerchief to block the musty smell of old oak and earth assaulting her senses. A cold draft blew up the narrow corridor causing the flame to dance and every hair on her body to stand on end.

She stopped when she finally felt the give of soft dirt beneath her slippered feet, the voices in the darkness suddenly quiet. She held the candle out, its light revealing half a dozen hooded figures.

“What are you girls doing in here?” she asked, placing her hand on her hip. “And why are you wearing those hideous cloaks?” She shook her head, lighting the torches that lined the walls. “Grace, what’s the meaning of this?”

One of the girls stepped forward, lowering her hood. “My apologies, Lady Browning. I thought it would be all right to use your home since you weren’t expected back for another week.”

“You thought I’d approve of all of you trespassing in my wine cellar?”

Another girl stepped up, removing her covering, revealing a pretty head of russet-colored curls. “We needed somewhere private to perform our inductions. We thought as a former
Ribbon
, you’d understand.”

Although she understood perfectly, that didn’t mean she approved of a gaggle of unchaperoned girls bumbling around her private reserve. She’d created the group years ago but had relinquished her status as one of the Ribbons
after she’d married. Still
,
she insisted on keeping watch over the revolving group of London’s most beautiful, privileged, and often times difficult to manage ladies.

“A ritual? Is that why you’re all dressed as death and chanting like the witches in
MacBeth
?”

Grace crossed her arms over her chest. “I thought you of all people would understand the need for tradition. I’m trying to add a bit of grandeur to the occasion.”

“Save the formality for Court. It’s dramatic enough earning a ribbon, without the added pomp of some secret ceremony. Hiding in cellars? Dancing around in sacks? For heaven’s sake, what’s next? Spilling the blood of goats?”

Cynthia rolled her eyes, muttering a curse under her breath. The Ribbons were flailing. There hadn’t been a decent leader for years, and an overindulged group like this required the guidance of someone strong and determined. Under Grace’s influence, they’d be little better than a collection of wallflowers within a Season.

The privilege of wearing a primrose-colored ribbon on your left wrist indicated you were the
crème de la crème
of London society. Being one of the
Ribbons meant you had it all—except for a husband, of course. Only
eligible
ladies could earn a ribbon, and after the age of four and twenty, rules dictated retirement from the organization. But no
Ribbon
had ever remained unmarried for
that
long, and no one had ever willingly left the Ribbons
before their time had come—except for one. Almost twenty years prior, she’d recruited her niece, Lydia, thinking she had the potential to lead the group. But she’d quickly come to regret her decision. Lydia had been a failure, turning her back on the Ribbons and her family.

“Ladies,” she stated for the benefit of all. “Go home and get some rest. For now, Grace, I’d appreciate it if you would consult with me prior to organizing any future ceremonies.” She nodded her head for emphasis and started to make her way back up the stairs.

After the debacle with Lydia, she’d promised herself never to intervene again. But without help, she was convinced that the waning group would disappear into obscurity. The Ribbons had been a presence in ballrooms for years, and she’d be damned before she let the tradition die off. She had no choice but to take matters into her own hands.

She needed someone she could mold, an ingénue she could groom into a proper leader for the Ribbons. It was times like these she wished she’d had children of her own. She’d been far too self-involved to even think about breeding. And it wasn’t as if she had any family to speak of—save for her two nieces. And those bonds were tenuous at best. She’d disinherited Lydia after her fiasco, and Jane, well . . .

Jane had never gotten over the fact that she’d chosen her younger sister over her. Since then, Jane only reached out when she needed money, which was often. There was always some sort of desperate situation—mysterious ailments, home repairs, her daughter’s education—

Suddenly, a plan began to form.

She knew just where to look for the next leader of the Ribbons, and when she found her, she vowed to turn that girl into the finest leader they’d ever seen.

Since herself, of course.

Meredith Castle’s hand whipped across his cheek with a surprising amount of force, the sound of the slap resonating up the stairwell.

Derek Weston nearly fell from his step, the blow catching him off guard.

She gasped, her hands flying up to her chest. “I’m so sorry!”

“No,” he said, sitting back, testing his jaw. “There’s no need to apologize. You had every right. In all honesty, you probably should have hit me harder.” He ran his hand through his dark hair. “I don’t know what came over me, Mere. You just looked so sad sitting there. I’m the one who’s sorry. I shouldn’t have taken such liberties. You’re my best friend and I’d be devastated if you couldn’t forgive me.”

“No.” She rubbed her stinging hand. “I didn’t mean to hurt you. It was a reflex, that’s all. I’ve never actually been kissed before and slapping you seemed the most appropriate reaction. I’m not mad.”

“Not at all,” she answered with a most serious tone. “In fact, I thoroughly enjoyed it and perhaps one day we could even repeat the experience.”

He leaned into her, but she held out her hands, stopping him from coming any closer. “Just not now. Especially with your parents and my mother in the next room over.”

He sighed, reclining against the step, his shoulders slumped in defeat. “Of course.”

The two sat on the stairs outside the Weston’s drawing room, just as they had a hundred times before. The Westons often invited Meredith and her mother over for dinner and cards on Friday nights. After her step-father had disappeared, the inhabitants of Middlebury made it a point to provide for the two women whenever possible, Derek’s family being the most generous by far. Only this time, it was different. Their parents weren’t discussing soil conditions, the cost of cattle, or politics—but rather Meredith’s departure to join her great aunt in London.

Meredith knew nothing about the city, save for what she’d read in books. She’d never had the opportunity to travel outside the country, but couldn’t remember ever wanting to either. She’d always been happy in Middlebury, the place she’d called home her entire life.

She cast a sideways glance at Derek, sitting quietly next to her, deep in thought. “Does it hurt?”

“It’s not my cheek that hurts,” he replied in a soft voice, looking down at his feet.

Meredith followed his gaze. His boots were well-worn and the sole on the left was starting to separate from the leather. The Westons were rumored to have titled relations somewhere in Scotland, and despite his father owning a modest parcel of land, one would never have guessed it by the simple manner in which they lived.

Meredith sighed and wrapped her arms around her knees. “I can’t remember the last time I felt so awful.”

Derek placed a comforting hand on her shoulder. “It’s not as bad as all that, Mere.”

“Now, now,” he soothed. “You’re going to London to stay with your rich aunt. There are far worse things in this world to cry over.”

“I’m sure there are, but at the moment, I can think of very few.” She wiped her nose with the back of her hand. “Perhaps Mama will change her mind and let me stay?”