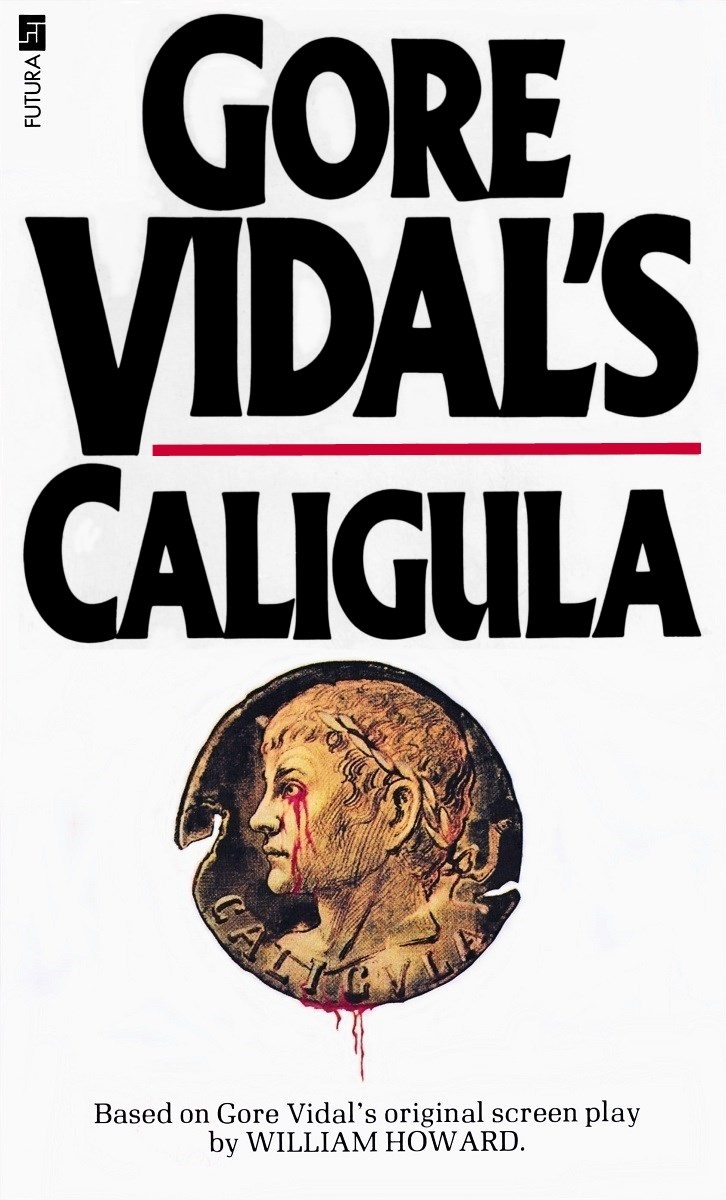 A man, a monster, an Emperor . . . he murdered his grandfather, slept with his sister, made a Senator of his horse . . . he terrorised Rome, made a brothel of the Senate, altered the very nature of the Empire . . .

with
John Gielgud
as
Nerva

First published in Great Britain by Futura Publications Limited in 1979

A small sound, no louder than a crackle, split the blackness of the bedroom. It startled him, and he raised his tongue from her nipple and turned his head in apprehension. Shadows cast by the dying light of the brazier leaped darkly up the painted walls, creating grotesque images that reminded him of bad dreams. As the heavy musk-scent of the perfume entered his nostrils, Gaius Julius Caesar Germanicus, known to all as “Caligula,” relaxed his trembling body. It was the perfume vial, that was all. The little glass bottle that Drusilla would sometimes bury in the coals of the brazier. It would snap during their lovemaking, and release its odors to stimulate them like an aphrodisiac. That was the sound he’d heard. Relaxing, Caligula inhaled the perfume deeply, but the sudden fear had cost him his erection.

“Gaius,” Drusilla murmured into the darkness, pulling his nakedness back down to the soft warmth of her own. As her long, slender fingers explored him, trailing down his prominent ribcage to the thick fur of his belly, she thought:
Thin. He’s so thin. He hardly eats a bite. Poor child, who can blame him? Here in Rome, Poison reigns as Queen, and he prefers hunger to an agonizing death.
Drusilla sighed in love and in sympathy, and added her tongue to the gentle movements of her fingers.

Caligula rolled gladly onto his back, watching intently as his sister’s lovely head trailed down to his chest, to his belly, stopping at the rising swell of his manhood. Catching his breath as Drusilla’s lips and tongue took firm hold of his penis, he twined his fingers into her tumbled blonde hair. Her licks and nibbles were causing flames of ecstasy to lick at his loins . . . no, deeper yet . . . Ah, Gods, but she was goo . . . oood. Not yet, not yet! He wanted to prolong this painful pleasure, this tiny dying. He reached down and pulled her head away from his groin, tugging at her bare arms until he had pulled her up to him and buried his lips in hers.

They kissed long and deeply, brother and sister, their tongues twining and forcing their way into each other’s mouths. He was dizzy with the taste of her; on her breath he could smell his own scent, heavy with the musty flavor of his genitals. He wanted more, more of the savor of woman mingled with man. Now he slid down past her on the sheets, turning her body at the same time so that they were mouth to genitals. With a moan of pleasure, he drove his tongue deeply into her, feeling her mouth closing around the base of his cock, her pink tongue licking at his testicles, fingers exploring his anus. Oh, yes, he thought. Home at last. He had no place to live in this world except the hot wetness between his sister’s legs. Drusilla, he thought. My only home. Only in your arms can I count myself safe. Drusilla, you are my household gods, my lares and penates. To you I sacrifice, to you I pour the libation of my seed. You are the goddess . . . you are Vesta, and Isis, Venus and Juno . . . you are . . . ah, ah . . . gods! . . . ah . . . AH!

He fell back upon the sheets, spent, his head rolling limply on the pillow. He heard Drusilla groan in protest; she had not yet reached her own sweet climax. Now she slid up the bed until her breasts were brushing Caligula’s face. They were large breasts, firm, round, white, with nipples of darkest pink, hard now with urgent need. Caligula took them in his mouth, one at a time, sucking, using his tongue and his teeth, while his fingers explored the dark, damp grotto under Drusilla’s flat belly, finding her clitoris and rubbing it back and forth.

“Ohhhhh . . . yes, Gaius . . . yesssss,” Drusilla urged, her breath coming in hoarse pants, like a frenzied animal’s. Her hips moved rhythmically, in time to his searching, stroking fingers, and Caligula found that he was hard again, hard and throbbing and dry, aching for soft wetness. With a cry, he pulled her slim body up and impaled her.

“Gaius! Gaius!” she cried. Rocking her hips frantically, she felt all of him inside her, driving her to yet wilder peaks of pleasure. As she rode him savagely, his hands fondled her breasts, pinching the nipples. The sharp pain increased her ecstasy, and they climbed together into a mutual explosion, their breaths mingling in kisses and sobs of relief.

Now he could relax, perhaps even sleep without the Dream.

It was always the same, the Dream, the one that had haunted him since childhood. It made him fear sleep almost as much as he feared to eat. What a world is this, Caligula thought bitterly, in which even the meanest slave can eat his fill without fear and sleep soundly every night. While he, heir apparent to the whole of the Roman empire . . . potential ruler of a domain that stretched from the Rhine to the Tigris . . . he, Gaius Caligula, jumped at every noise and shadow, went sleepless and hungry. Drowsily, he stared into the darkness at the landscape painted on the far wall of his bedroom, a landscape seen dimly through the glow of the brazier’s red coals. There was peace in those painted walls, in those pale landscapes with their etiolated trees and soft-hued temples and tiny, receding, draped figures. If I could but enter that picture . . . take my sister by the hand . . . only we two . . . in the land of the temples and the poplar trees . . . to walk like innocent children . . . hand in . . . hand.

Slowly, like the inexorable march of a funeral procession, the Dream came to him, wrapping his brain in its shroudlike folds, smothering him with black remembrance. He was alone, yet not alone, and he was small, very small and helpless. Others stood around him, others whom he knew . . . a mother, brothers, sisters . . . yet he was alone. Even Drusilla could not help. It was as though a veil of iron were between them, through which he could not reach her warm and loving hand. It was cold where he stood, dark and cold, and he could hear the shuffling feet and the chanting, and the baby-soft hair on his head rose up in fear.

He was dressed in his armor. A six-year-old dressed as a soldier. It was their joke to costume him as a private, even down to the
caligae,
the small half-boots the soldiers wore. They called him Caligula, or “Little Boots,” and he was their mascot and their lucky charm. But now there were no soldiers to cheer him, to rub him for luck, to snatch at the hem of his cloak, or kiss his little boots. Now he stood alone, and he was cold.

In the Dream it was not Germany, although he was six, and when he’d been six he’d lived among the soldiers, in Germany, where his father commanded the noble legions of Roman heroes. No, it was Rome . . . or, rather, outside Rome, for tradition prevented a funeral cremation within the City walls. Yes, he remembered now. It was a funeral. A body would be burned. But whose? Whose? The child Caligula stood wrapped in his woolen soldier’s cloak, wrapped in fear.

He could hear the procession coming closer, and now he could see the torches and the waxen funeral masks. Deep inside him the knowledge began to grow that he would have to look upon the corpse before it was burned, and stand watching as the flames took it. He didn’t want to look. The masks drew nearer still and now he could begin to make out their features. They terrified him, but he could not allow himself to tremble, child though he was. He knew that if he showed even a single sign of fear, something monstrous and most horrible would seize him too, and drag him down into the funeral pyre.

Venus Genetrix came first. She who was Mother of the Julians and the Claudians, goddess-mother of the Imperial family. To look upon her face meant death, and little Caligula pulled a corner of his cloak over his head to shield him from her glance. As Venus approached, the chanting of the mourners grew louder, and the sound of the horns and cymbals and pipes mingled weirdly with the wails and moans and shrieks of the procession, as it wound raggedly up to the altar, torches flaring.