Read Got the Life (A Nicki Sosebee Novel) Online

Got the Life (A Nicki Sosebee Novel) 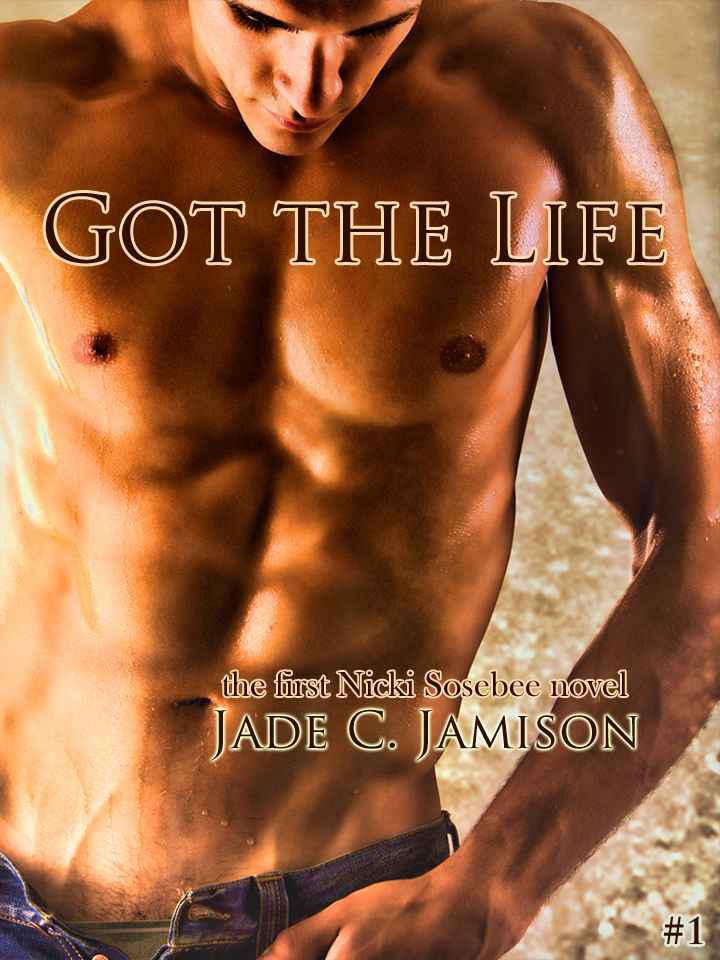 Nicki Sosebee has been working low-paying jobs ever since she finished school, but now that she’s older, she wants more.  She’s a novice reporter trying to learn the ropes.  Just as she’s getting her career goals on track, though, her love life gets worse and worse.  Sure, she has no problems picking up good-looking guys for brief flings, but relationships?  Out of the question.  Maybe it’s because Sean, her gorgeous best friend, just can’t see her as more than a buddy.  So when Sean encourages her as she pursues her first headline-producing story, Nicki realizes that her life’s pretty sweet…if only she can live long enough to see tomorrow’s front page.

Nicki took a deep breath.  He was getting too close, too close for her to concentrate.  She could smell him…Sean always smelled like sandalwood and—well, Sean—and he was more potent today than usual.  Maybe it was the thin sheen of sweat on his chest that also made his pecs look so fucking gorgeous?  She gulped.
Shit.
She had no idea what to say.  “Why do you care anyway?”

His eyes stayed on hers.  “Because you’re my friend, Nicki, and I know what these guys do.”  Then his eyes dropped to her lips.

She intended to call his bluff.

“Bullshit.  You wouldn’t just give your bike away for that.  You know I can take care of myself.”

His voice was low.  “You’re right.”  His eyes locked on hers again as he placed his hands on both sides of her face, drawing her into a kiss.  Nicki thought her heart had stopped beating until she felt it thudding against her chest, as though she were a rabbit being chased by a fox.  Her hands cupped his pecs, and she felt the damp warm sweat, felt the hard muscle respond to her hands.  Tasting Sean and smelling him up close made the effects of the venti caramel macchiato this morning seem like drinking mother’s milk.  God, he tasted good.

The kiss ended and Sean pulled back.  Nicki’s eyes stayed closed, her hands now touching only air.  She couldn’t catch her breath, and she didn’t want the moment to end.  She heard Sean say, “Shit.  That didn’t happen.”

Nicki’s eyes popped open.  She was speechless.  “Uh, yeah, I think it did.”  She had a pair of dripping wet panties to prove it.

Nicki’s tongue played with a molar on the left side of her mouth.  She was getting ready to speak, trying to think up a good retort, when she heard a
click click
at the other end of the garage.  Sean looked in Nicki’s eyes again, sending her some coded message, something she couldn’t quite register, and then his eyes darted back to his visitor.  Then Nicki figured it out.

She turned around for confirmation and saw Kayla, his girlfriend, extending a brown paper bag.  “Lunch.”

Nicki made sure to leave just as Sean was biting into the sandwich.  There was no way they could resume their conversation now.  It would just have to wait.

What readers are saying about the Nicki Sosebee series:

Sara, 5-star review on Amazon for
No Place to Hide
:  “hurry up with the next book! i’m really getting to like the characters & the sex scenes are way fun!”

Gillian, 4-star review on Amazon for
Got the Life
:  “I recently stumbled across this series after reading another book by Jade C Jamison . . . . I thoroughly enjoyed this book and the others in the series that are available, and can’t wait for the latest . . . to be released.”

Anonymous, 5-star review on Barnes & Noble for
Got the Life
:  “YOU HAVE TO GET THIS BOOK! IT IS AWESOME!”

Sara, 5-star review on Amazon for
Innocent Bystander
:  “
The best Nicki book yet!!!! I love reading a prog
ressive series like this & Jade’
s talent & connection to her characters & the story are stronger each time. I
’
m really happy with the length of the story too. Enough for me to be satisfied & ready for the next chapter
. . . . More please!”

Funnychick, 5-star review on Amazon for
Innocent Bystander
:  “
I love love love Nicki Sosebee!!! I have all the books and I cannot wait to see what happens next. Must read this book but better yet go back and read it all from the beginning. She keeps you wondering what will happen next and I love how she brings back characters from past books.
”

Fabric of Nigh
t

3 No Place
to Hide

The characters and events portrayed in this book are fictitious or are used fictitiously.  Any similarity to real persons, living or dead, is purely coincidental and not intended by the author.

WHY DO ALL
the bad boys have to be so
fucking cute?

Nicki
Sosebee
sat on
a
hard wooden pew in the
Winchester
County
courthouse, shifting to relieve the pressure on her bottom.
She lifted her pencil up off the stenographer’s notebook she’d been writing notes in and tapped the eraser against the paper.  She shook her head.  He might’ve been a bad boy, but he was sure
nice
to look at.

The accused, a Mr. Jason Edwards, sat
at the defendant’s table
, a smirk
etched
on his flawless face.  His dark brown eyes smoldered, and his light brown hair was spiked
, but it was too short to seem
extreme.
W
hat made
Nicki
feel warm all over
, though,
were
his arms full of tattoos.
For a reason she could never explain, she thought body modifications made guys look…well, hot.  And Edwards?  Well, he was of the four hundred degrees Fahrenheit variety.

When Edwards first walked
in the courtroom
, t
he judge reprimanded
him
for not wearing proper courtroom attire.
It indicated he wasn’t taking the proceedings seriously.
Edwards had sneered but said nothing.
Nicki
knew
the man had
saved himself a contempt of court citation by biting his tongue—she’d
sat
in Judge Lewis’s courtroom before, and he didn’t
let
flippant remarks
pass
.  One sarcastic
statement
and Edwards would have found his
arraignment
continued
,
his ass back in the same lame jail cell he was in just a few minutes ago.
Instead, he’d likely walk out of the courtroom in just a few minutes, along with a date for a hearing.
But hearing or no, he’d be a free man—temporarily, at least.
His court-appointed attorney simply apologized and promised it wouldn’t happen again.

Nicki
felt compelled
to follow this case…and it wasn’t just because Edwards was nice to look at.
It didn’t matter that a good many defendants she saw day in and day out in this courthouse were recovering meth addicts (some of them
weren’t
recovering and didn’t plan to anytime soon, however)
who were nothing but bones and sunken cheeks
or old alcoholics
with lined foreheads and red noses
.  That was beside the point.
No, instead it was beca
use his case was something
different
.  And different stories were the kind her editor would publish.  He didn’t give a shit about the ordinary.  Ordinary stuff found a small corner in the paper, if that, but the different stuff?  Sometimes it could even wind up on the front page.

That hadn’t happened to
Nicki
.  Yet.  That was one of her short-term goals.

Nicki
didn’t have many long-term goals.  She didn’t like to think that far into the future.  Talk about pressure.  She liked the way a lot of her Zen friends approached life, living in the moment.  She knew her own refusal to think too far ahead had nothing to do with Buddhism, but it was a good reason to give people when they asked.  Really, though, she knew it was something else that kept her from looking too far, and if she wasn’t ready to face it, she certainly wasn’t ready to talk about it.

Shadow's Light by Nicola Claire
Prince of Passion by Donna Grant
Shame on You by Tara Sivec
Fathoms of Forgiveness (Sacred Breath, Book 2) by Nadia Scrieva
The Way Things Are by A.J. Thomas
Hostage by Emlyn Rees
the Savage Day - Simon Vaughn 02 (v5) by Jack Higgins
Use by CD Reiss
Wicked Earl Seeks Proper Heiress by Sara Bennett
The Bear and the Unicorn (Supernatural Enforcers Agency Book 6) by E A Price
Our partner