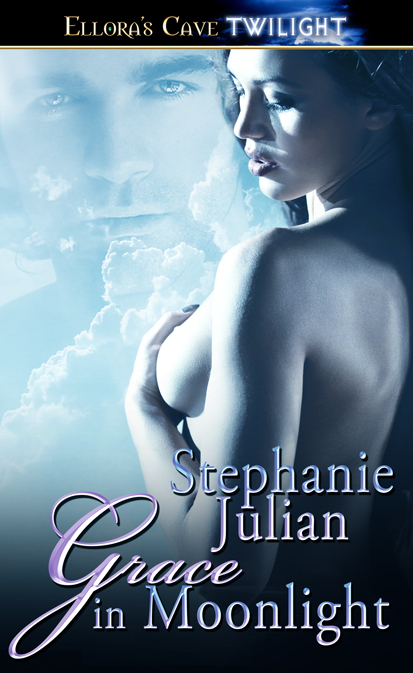 Kaisie Giliati is the
lucani
king’s best tracker. He’s used to hunting and capturing his prey with little
resistance. He’s also old enough to know exactly what he wants, and the feisty
redhead who stirs him like no other is at the top of his list. Too bad she’s
the enemy and seemingly impervious to his charms.

Grace Bellasario has a target on
her back, two children to protect from their evil father and she’s in love for
the first time in her life. With a man who should hate her—a man she has no
business craving. But does she ever. Grace doesn’t have a chance in hell of
shaking Kaisie off her tail. Now he just needs to keep her alive to live
happily ever after…

Warning: The unauthorized reproduction or distribution of this
copyrighted work is illegal. No part of this book may be scanned, uploaded or
distributed via the Internet or any other means, electronic or print, without
the publisher’s permission. Criminal copyright infringement, including
infringement without monetary gain, is investigated by the FBI and is
punishable by up to 5 years in federal prison and a fine of $250,000.
(http://www.fbi.gov/ipr/). Please purchase only authorized electronic or print
editions and do not participate in or encourage the electronic piracy of
copyrighted material. Your support of the author’s rights is appreciated.

The publisher does not have any control over, and does not assume
any responsibility for, author or third-party Web sites or their content.

Arus
: magical power inherent in the
Fata
and
Enu
,
races of Etruscan descent

Candela
: Etruscan sprite, tiny magical beings with
wings and a certain glow about them

Malandante
: descended from the Etruscans but born
with a bent toward evil, with a taste for power and wealth

Silvani
: one of the three original Etruscan
Fata
;
always female, protectors of fields and forests

“No, absolutely not. I don’t care what you say, there’s no
way I’m going to allow you—”

“Allow?
Allow!
Lady, you’re not in any fucking
position to allow anything.”

“Don’t you swear at me, Kaisie Giliati. And I don’t think
you understand. I will
not
allow you to go without me to rescue my son.
He
needs
me there. He needs his mother. I’m all he’s got and I will
not
let you leave me behind.”

“
Non rompermi le palle.
You’re just going to get in
the way and I can’t—”

“Get in the way! Ooh, you are
such
a jackass. Don’t
even
think
you can—”

“How long have they been at this?” Catene Rossini Ferante
whispered the words as the two combatants continued, but Kaine Giliati heard
them loud and clear.

Without taking her gaze away from the seething emotion
between her father, Kaisie Giliati, and Grace Bellasario, she motioned for Cat
to come closer. She didn’t want to interrupt the battle.

“About half an hour,” Kaine whispered back. “They’re starting
to circle back to where they started, though, so I assume Dad’s going to storm
out in another minute. That’s the normal course of events.”

Cat shook her head, careful to keep it subdued so she didn’t
draw Grace’s or Kaisie’s attention. “I don’t know why your dad keeps fighting
her about this. She’s right. The team needs her help. She may not have a lot of
power but she knows how the
Mal
do things. She’ll be able to answer
questions no one else can.”

Kaine agreed. Silently. Her dad needed to suck up his
objections and get with the program to take Grace along on the dangerous
mission to rescue Grace’s ten-year-old son, Alex.

A week ago, Ettore Marrucini had magically transported
himself and six other men into the
lucani
den and walked out with Cat,
Evie Simmons and Alex. Cat and Evie had gotten away.

Marrucini still had Alex. But there was no way the
lucani
would allow the
Malandante
to corrupt sweet little Alex and turn him
into a monster, like the other
Mal
.

Hell, most people had forgiven Grace’s sins, including the
two women who had absolutely no reason to ever forgive her. But Tamra Macmillan
and Evie Simmons had found a way to get beyond the fact that Grace had tried to
kidnap Tam and had actually succeeded in kidnapping Evie and her brother, John.

For weeks, Grace had made Evie’s and John’s lives hell,
holding them against their will while Grace had taken pints of Evie’s blood on
a regular basis. To create a serum that allowed her son to live.

Turns out Evie’s blood had magical properties the
streghe
and the
lucani
medical doctors were still trying to figure out. The
Etruscan witches had made some progress in determining that Evie’s blood
chemistry had been altered in some strange way, though not by Grace.

Grace had only been able to identify the fact that Evie’s
blood was different and use it to help her son. The hint of magic in her blood,
something many
eteri
had but never realized, kept Grace’s son from
succumbing to a disease that wanted to waste the little boy away to nothing.

“Gods damn it.” Kaisie’s voice had reached almost to
shouting level. “You’re not strong enough to be of any help whatsoever—”

“And you’re an ass if you seriously believe you can—”

Kaine and Cat exchanged raised eyebrows as the fight raged
on but neither had anything else to say.

Ultimately, it wasn’t Grace or Kaisie who made the final
decision about Grace accompanying the team. It was Kyle Rossini. And Kyle, as
head of the
sicarii
, the
lucani
king’s assassins, had already
made his decision. He’d told the four members of his team, which included
Kaine, that Grace was going.

“You know what?” Kaisie finally threw his hands in the air.
“I can’t talk to you. You’re irrational.”

Kaine took a deep breath. Her dad had just reached his
breaking point. When he started talking with his hands, she knew it was only a
matter of minutes before he stormed out.

“I’m irrational?” Grace fired back. “You’re the one acting
like a madman.”

Anyone who didn’t know Kaisie would think he was homeless
and off his meds.

His dirt-brown hair hung below his shoulders in a straggly
mess. It was clean but it definitely looked as if he’d been the one to butcher
his hair last. Without the benefit of a mirror. His beard looked a little
better than it had when he’d first shown up two weeks ago. At least he’d
trimmed it down to a manageable scruff, which he would eventually shave off. He
always did.

Six-foot and nearly two-hundred pounds of lean muscle, Kaisie
had bright-green eyes a shade lighter than her own. They burned when he was
furious, like he was now.

He’d never act on that anger, not in any way. Her dad didn’t
hit. If he was in his pelt and you were a mortal enemy, he’d fight until his
last breath and he’d win. And if he could, he’d leave his opponent alive.

Still, he had an air of danger that gave him an edge. One
that either made women run in the opposite direction or drew them like flies,
not that he’d ever kept one around for longer than a few weeks.

Neither variety usually wanted to fight with him. And that’s
all he and Grace did until her dad decided he’d had enough and left.

She loved her dad dearly but the man had a serious
commitment problem. Sure, he’d reared her from the time she was a baby and her
mother had died. But more often than not, he’d left her with whatever family
agreed to care for her that week when he went on assignment for the king.

She’d never doubted his love but ever since she’d been old
enough to take care of herself, he’d been on assignment more often than he’d
been home because her dad was the best tracker the
lucani
had ever had.
If it was lost, Kaisie Giliati could find it.

It’d taken him less than a week to find Alex. Her dad was
that good.

And now it was up to Kaine’s boss, Kyle, to come up with a
plan to get Alex out of a secure compound in Florida where Marrucini had
stashed the boy.

Cat leaned closer to Kaine. “Do you think they realize
they’re hot for each other?”

Cat merely raised her eyebrows and gave her a wicked grin,
to which Kaine responded with rolled eyes.

Hell, everyone in the
lucani
den saw what was going
on between her dad and Grace. Trying to ignore the situation wouldn’t make it
go away.

And Kaine had to admit she kind of liked the woman.

Grace had done some bad things, yes, but she’d done them to
save her child. No
lucani
would ever fault someone for trying to save
the life of their child.

The problem was some of the
lucani
would never see
Grace as anything other than a pawn of the
Malandante
.

Accidental Happiness by Jean Reynolds Page
Frostbitten: The Complete Series by Bera, Ilia
A Thousand Stitches by Constance O'Keefe
Thin Ice 5 - Checkmate by BANKSTON, KR
The Girl & the Machine by Beth Revis
Scarred (Lost Series Book 2) by LeTeisha Newton
I Can Make You Hot! by Kelly Killoren Bensimon
GUILT TRIPPER by Geoff Small
Dominated by the Librarian #1: 'Surrender to your Desire' (Male submission erotica) by Jones, Tara
Magic at the Gate by Devon Monk
Our partner