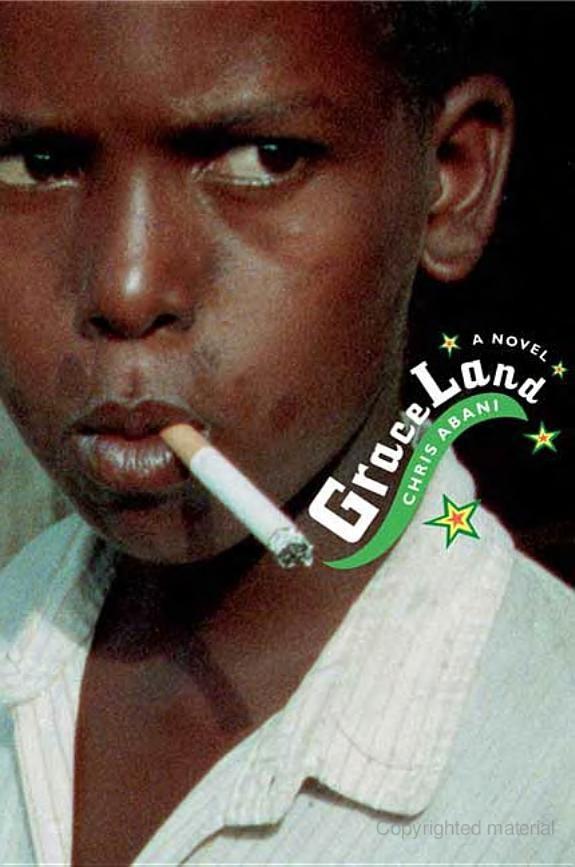 This novel is set in Maroko, a sprawling, swampy, crazy and colorful ghetto of Lagos, Nigeria, and unfolds against a backdrop of lush reggae and highlife music, American movies and a harsh urban existence. Elvis Oke, a teenage Elvis impersonator spurred on by the triumphs of heroes in the American movies and books he devours, pursues his chosen vocation with ardent single-mindedness. He suffers through hours of practice set to the tinny tunes emanating from the radio in the filthy shack he shares with his alcoholic father, his stepmother and his stepsiblings. He applies thick makeup that turns his black skin white, to make his performances more convincing for American tourists and hopefully net him dollars. But still he finds himself constantly broke. Beset by hopelessness and daunted by the squalor and violence of his daily life, he must finally abandon his dream.

With job prospects few and far between. Elvis is tempted to a life of crime by the easy money his friend Redemption tells him is to be had in Lago's underworld. But the King of the Beggars, Elvis's enigmatic yet faithful adviser, intercedes. And so, torn by the frustration of unrealizable dreams and accompanied by an eclectic chorus of voices, Elvis must find a way to a Graceland of his own making.

Graceland is the story of a son and his father, and an examination of postcolonial Nigeria, where the trappings of American culture reign supreme. 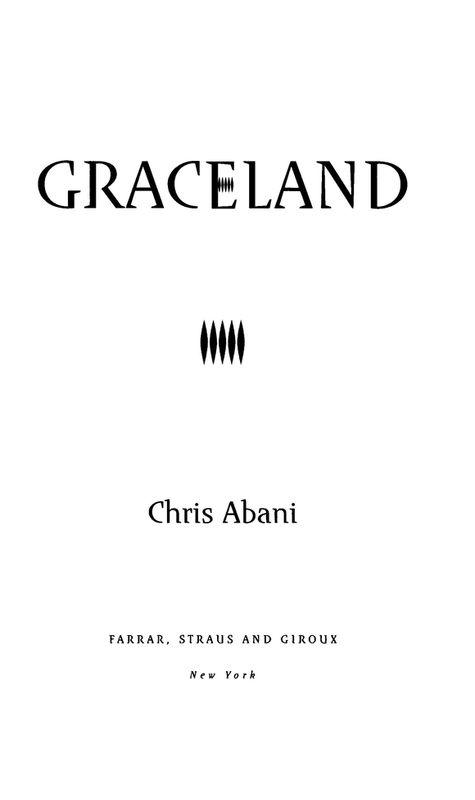 It seemed almost incidental that he was African.
So vast had his inner perceptions grown over the years …

—BESSIE HEAD,
A Question of Power

The Igbo hold the kola nut to be sacred, offering it at every gathering and to every visitor, as a blessing, as refreshment or to seal a covenant. The prayer that precedes the breaking and sharing of the nut is: He who brings kola, brings life.

Elvis stood by the open window. Outside: heavy rain. He jammed the wooden shutter open with an old radio battery, against the wind. The storm drowned the tinny sound of the portable radio on the table. He felt claustrophobic, fingers gripping the iron of the rusty metal protector. It was cool on his lips, chin and forehead as he pressed his face against it.

Across the street stood the foundations of a building; the floor and pillars wore green mold from repeated rains. Between the pillars, a woman had erected a buka, no more than a rickety lean-to made of sheets of corrugated iron roofing and plastic held together by hope. On dry evenings, the smell of fried yam and dodo wafted from it into his room, teasing his hunger. But today the fire grate was wet and all the soot had been washed away.

As swiftly as it started, the deluge abated, becoming a faint drizzle. Water, thick with sediment, ran down the rust-colored iron roofs, overflowing basins and drums set out to collect it. Taps stood in yards, forlorn and lonely, their curved spouts, like metal beaks, dripping rainwater. Naked children exploded out of grey wet houses, slipping and splaying in the mud, chased by shouts of parents trying to get them ready for school.

The rain had cleared the oppressive heat that had already dropped like a blanket over Lagos; but the smell of garbage from refuse dumps, unflushed toilets and stale bodies was still overwhelming. Elvis turned from the window, dropping the threadbare curtain. Today was his sixteenth birthday, and as with all the others, it would pass uncelebrated. It had been that way since his mother died eight years before. He used to think that celebrating his birthday was too painful for his father, a constant reminder of his loss. But Elvis had since come to the conclusion that his father was simply self-centered. The least I should do is get some more sleep, he thought, sitting on the bed. But the sun stabbed through the thin fabric, bathing the room in sterile light. The radio played Bob Marley’s “Natural Mystic,” and he sang along, the tune familiar.

“There’s a natural mystic blowing through the air / If you listen carefully now you will hear …” His voice trailed off as he realized he did not know all the words, and he settled for humming to the song as he listened to the sounds of the city waking up: tin buckets scraping, the sound of babies crying, infants yelling for food and people hurrying but getting nowhere.

Next door someone was playing highlife music on a radio that was not tuned properly. The faster-tempoed highlife distracted him from Bob Marley, irritating him. He knew the highlife tune well, “Ije Enu” by Celestine Ukwu. Abandoning Bob Marley, he sang along:

On the road outside, two women bickered. In the distance, the sounds of molue conductors competing for customers carried:

Elvis looked around his room.
Jesus Can Save
and
Nigerian Eagles
almanacs hung from stained walls that had not seen a coat of paint in years. A magazine cutting of a BMW was coming off the far wall, its end flapping mockingly. The bare cement floor was a cracked and pitted lunar landscape. A piece of wood, supported at both ends by cinder blocks, served as a bookshelf. On it were arranged his few books, each volume falling apart from years of use.

By the window was a dust-coated desk, and next to it a folding metal chair, brown and crisp with rust. The single camping cot he lay on was sunk in the center and the wafer-thin mattress offered as much comfort as a raffia mat. A wooden bar secured diagonally between two corners of the room served as a closet.

There was a loud knock, and as Elvis gathered the folds of his loincloth around his waist to get up, the lappa, once beautiful but now hole-ridden, caught on the edge of the bed, ripping a curse from him. The book he had fallen asleep reading, Ralph Ellison’s
Invisible Man,
fell from his side to the floor, the old paperback cracking at the spine, falling neatly into two halves as precisely as if sliced by a sword.

“Elvis! Elvis! Wake up. It’s past six in de morning and all your mates are out dere looking for work,” his father, Sunday, said.

“Dancing is no job. We all dance in de bar on Saturday. Open dis bloody door!” Sunday shouted.

Elvis opened the door and eyed him. The desire to drive his fist through his father’s face was old and overwhelming.

“I’ll just wash, then go,” he mumbled, shuffling past Sunday, heading for the backyard, passing Jagua Rigogo, who stood in the middle of the backyard cleaning his teeth with a chewing-stick, preparing for his morning ablutions and the clients who would soon start arriving to consult him on spiritual matters. He reached out and squeezed Elvis’s arm as he passed. Elvis turned to him, opening his mouth to speak.

“Before you speak, my friend, remember, a spiritual man contain his anger. Angry words are like slap in de face.”

Elvis took in Jagua’s dreadlocks, gathered behind him in a long ponytail by a twisted tennis headband, and the distant red glare of his eyes. He didn’t have his python with him, and Elvis wondered where it was. Probably asleep in the cot Jagua had salvaged from one of the city dumps, and which sat in the corner of his room. Merlin, his python, slept in it, comfortable as any baby.

Elvis just sighed and silently fetched water from the iron drum sunning in a corner of the yard. He snatched his towel off the line and entered the bathroom, trying not to touch the slime-covered walls and the used sanitary pad in the corner. How did they come to this? he wondered. Just two years ago they lived in a small town and his father had a good job and was on the cusp of winning an election. Now they lived in a slum in Lagos. Closing his eyes, he rushed through his morning toilet. On his way back inside to get dressed, he passed his father in the corridor again.