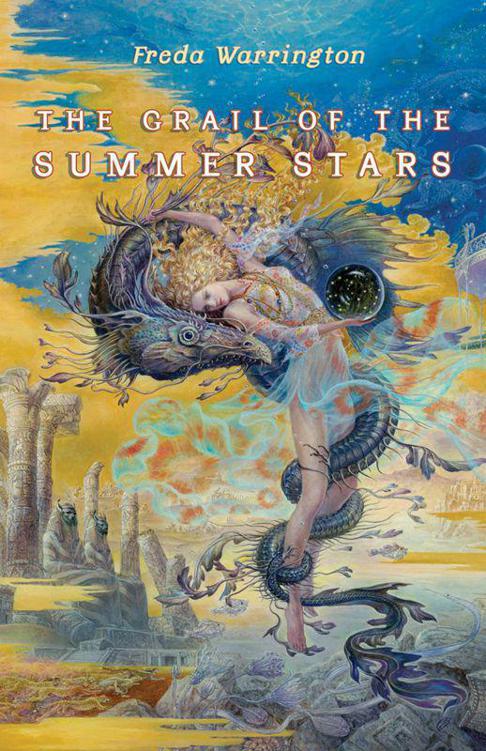 For all my friends, old and new.

Especially for my mum, Ida Warrington.

And as always, for my guardian angel, Mike Llewellyn.

With all my love.

There are almost too many people to thank for their support, both with the Aetherial Tales series in particular and with my writing in general over the years. In no order of favor, Jenny Gordon, Justina Robson, Storm Constantine, Stephanie Burgis, Keren Gilfoyle, Anne Gay, Stan Nicholls, Tanith Lee, Mark Robson, Anne Sudworth. Thanks also to the stalwarts of the Birmingham SF and F Writers’ Group, and to my fellow members of The Write Fantastic: Kari Sperring, Juliet McKenna, Chaz Brenchley, Liz Williams, Ian Whates, Deborah J. Miller and Sarah Ash. Together as TWF we are doing our best to widen the appeal of fantasy fiction in the United Kingdom, drawing in new readers and raising the profile of the genre.

Special thanks are also due to my agents, John R. Parker and John Berlyne of Zeno Agency, to my editor at Tor, Jim Frenkel, and to the wonderful artist Kinuko Y. Craft for creating such stunning cover art.

As with
Elfland
and
Midsummer Night
, the settings for
Grail of the Summer Stars
are loosely inspired by real places, but entirely fictionalized for the purposes of the story. The museum where we find Stevie working at the start of the book, along with its staffing arrangements, administration and so on, is a confection of my imagination and not intended as a portrayal of any actual establishment.

However, I must note that the Jewellery Quarter of Hockley, Birmingham, United Kingdom, is a real and wonderful heritage area. The Birmingham Jewellery Museum, not
entirely
dissimilar to Stevie’s place of work, is well worth a visit.

4. Light Through the Dust

22. The Eye of the Cauldron

Author’s Note: Landscapes of the Fantastic

I see a city of gleaming black stone that shines with jewel-colors: crimson, royal purple and blue. I see labyrinthine passages and rooms where you can lose yourself for days, months.

Lofty pillars. Balconies onto a crystal-clear night full of stars, great sparkling white galaxies like flowers. Statues of winged men looking down with timeless eyes. I want to stand on those balconies and taste the breeze and hear the stars sing and be washed in the light of the moon. There will be ringed planets, and below, the tops of feathery trees blowing gently: an undiscovered land full of streams, with willow trees in spring green, and oak and hazel—with their elemental guardians, slender birch-white ladies with soft brown hair—and mossy banks folding into water.

And through this citadel walk graceful men and women with lovely elongated faces and calm, knowing eyes. They have seen too much. They might wear robes of medieval tapestry or jeans and a shirt but you would never mistake them for human. It’s so much more than beauty. Look at them once and you can’t look away. These are Aetherials in their oldest city, Tyrynaia.

They have been building the citadel for thousands of years and it will never be finished. Upward it spreads, and outward, and down into the rock below. It is their seat of power: their home.

They take the names of gods, on occasion.

Sometimes they are heroic and help the world.

And sometimes they are malicious and turn it upside down.

In the deepest depths of the citadel, a ceiling of rock hangs over an underground lake. Here is Persephone’s chamber. She welcomes and cares for those who come, soul-sick with despair, to seek solace, rest and sleep. Here they need not speak, only sit on a black marble lip and contemplate the mysterious, glowing lake beneath. If you lie down in despair, Persephone will lie down with you.

—from the diary of Faith Fox

Daniel’s hands shook as he checked his watch. Five to six. Dusk had fallen two hours ago and he’d turned off the lights, relying on an orange wash of streetlight that spilled through the windows. The studio was an empty industrial space around him, darkness massing above the high steel beams. Easels and store cupboards stood stripped, the wide shallow drawers of plan cabinets yawning open. He hardly noticed the mess he’d left: scraps of paper, curled-up paint tubes, a layer of charcoal and gold-leaf dust coating everything. There was no time.

He worked fast, fumbling as he covered the surface of the last panel with protective paper, folded the outer wooden leaves into the center, then bound the triptych in layers of bubble wrap. Better too much wrapping than too little. Nothing cooperated: clouds of plastic billowed around him and he kept losing the damned scissors. The sticky tape clung to his fingers, to everything except the edges he was trying to seal. In frustration he tore the tape with his teeth. He could barely squeeze the last, overwrapped artwork into its packing case.

The tiny luminous bars of his watch hands moved on. Ten past six. Rain dashed the windows.

In his rush to fasten the lid of the last case, Daniel gouged himself with the screwdriver. He barely felt the pain.

Where the hell was the courier?

He heard the elevator rising one floor from ground level, its doors opening onto the landing. Footsteps rang out and wheels rumbled along the metal walkway that jutted above the art center’s large public foyer. Hurriedly Daniel completed the delivery label. As an afterthought, he scrawled a note—too late to place it inside, so he folded the paper and stapled it to the crate. The noise grew louder as it bypassed other studio units, stopping abruptly at his door.

There was a loud knock. His heart jumped into a wilder rhythm. A figure waited outside the glass-paneled door, dark against the fluorescent lights of the landing.

Daniel held himself together long enough to exchange pleasantries with the courier as he double-checked the forms and handed over payment. Then the courier hefted all four packing cases onto a trolley, grunted a word of thanks, and went.

Softly, Daniel closed the door behind him. It was done.

For a moment, he thought of running after the courier, shouting at him to wait, he’d written the wrong address … Too late. Automatic doors hissed shut and he heard the elevator trundling downwards. No, his decision couldn’t be unmade. He knew he’d done the right thing.

Oliver, though, would not see it that way.

Daniel walked to the middle of his studio and looked up at a steel beam above his head. He reached out to a low cabinet nearby and picked up the tangle of rope he’d left on top. The rope was a thin blue nylon twist, designed for lashing together heavy goods … strong enough to bear the weight of a lean human body. He positioned a high stool. Standing on the seat should give him enough height to lash the noose to the beam.

The letter he’d written to his mother lay inside the top drawer of the cabinet. There was nothing else to say.

He looked up, testing the strength of the rope between his hands. He felt no fear, only a whooshing sensation that shook his whole body. It was a trance-like feeling, a flood carrying away all clear thought. His visions would end and there would be peace …

He heard the voice, glimpsed the flash of glass as the door swung open. Turning, he confronted a silhouette with light spinning a white-gold halo through the edges of its hair.

Even when the machines were silent, Stevie could still hear them. Ghosts thronged the empty factory: women in long dark skirts and men in overalls, busy in the dusty gloom. Their work clothes had no pockets or cuffs to trap even a speck of gold dust. The workers mouthed soundlessly at each other, lip-reading over the whir of lathes and the steady thump of presses … she wondered at the long hours, the sweaty heat, their overcrowded backstreet homes with shared toilets in outhouses, and no running water …

Stevie shook her head, pushing the ghosts away. Overactive imagination. She “saw things” so readily that doctors had diagnosed visual migraine, or even some odd form of epilepsy. She wasn’t the only member of staff to sense
presences
, but her visions often went to extremes.

A pounding noise broke her trance.

“Stevie, are you there? Someone can’t read the ‘Closed’ sign.”

The old jewelry firm, Soames & Salter, was a museum now. Over thirty years ago, the owners had retired. Unable to sell the unmodernized business, they’d simply locked the doors and walked away, leaving a time capsule of work methods that had barely changed from 1880 to 1980. Tools had been left strewn on benches, dirty teacups abandoned … this sense of sudden desertion was so carefully preserved by the curators that it made visitors shiver.

Stevie made a last check that all lights and machinery were switched off, then closed the door on the old factory and hurried through the museum gift shop.

The person banging on the entrance door was not a late visitor, but a wet and fed-up-looking delivery driver, his van parked crookedly against rush-hour traffic.

He presented a large packing crate, addressed to
Stevie Silverwood, Museum of Metalwork, Hockley, Birmingham.
As she helped him drag the case inside, he muttered apologies for the delay, blaming “problems at the depot” over the weekend, and that they’d tried to deliver the previous day only to find the museum closed.

“Yes, we’re shut on Mondays,” said Stevie. “It doesn’t matter, I wasn’t expecting a parcel in the first place.”

She signed his electronic notepad, said her thanks—receiving a curt “Orright, pet” in return—and relocked the door behind him. A note stapled to the crate was close to falling off. Stevie detached the scrap and frowned at it.

The world needs to see this
, stated the scribbled handwriting.

“Oh, really?” she said aloud. “Is the world ready for it, whatever it is?”

Outside, streetlamps splashed the rainy grey dusk. Stevie watched the van pulling away into the sluggish traffic along Vyse Street. Although she’d turned off the main lights before he arrived, a parade of car headlights flashed over display cases full of jewelry, glinting on shelves stacked with local history books and souvenirs. Enough light to read by.

Chloë by Marcus LaGrone
The Resurrection of Aubrey Miller by L. B. Simmons
B0046ZREEU EBOK by Elphinstone, Margaret
Milk for the Billionaire (billionaire domination and lactation erotica) by Francis Ashe
Grave Surprise by Charlaine Harris
Killer's Draw: The Circuit Rider by Amore, Dani
A Mighty Fortress by David Weber
The Ghost by Robert Harris
The Confidential Life of Eugenia Cooper by Kathleen Y' Barbo
Tales for a Stormy Night by Dorothy Salisbury Davis
Our partner